There are a surprising number of good all-in-ones in the £50-£100 bracket and Brother’s DCP-J315 falls smack in the middle of the bracket. It follows the lines of much of the company’s range and offers wireless connection for computers and mobile devices.

Largely cased in textured black plastic, with only highlights in high-gloss, the machine looks functional, though a little lopsided towards the front, where all the controls are clustered to the right of the 48mm LCD. The display is set in at an angle, so is easy to view and is large enough for menu options and selecting from photo thumbnails.

The controls themselves are very straightforward, with a diamond of menu navigation buttons, mode buttons for photo capture and scan and three buttons to start and stop copy and scan jobs. Just over the front lip is a single slot for MemoryStick and SD cards, though there’s no front panel USB, which is a shame, as it wouldn’t cost much to fit and would increase the scan and print capabilities considerably.

The flatbed scanner doesn’t have an Automatic Document Feeder (ADF), but that’s little surprise on a machine in this class. There’s a single paper cassette which slots in at the front and can take up to 100 sheets of paper or 20 to 30 photo blanks. The key word here is ‘or’, as you have to remove plain paper to load photo media. 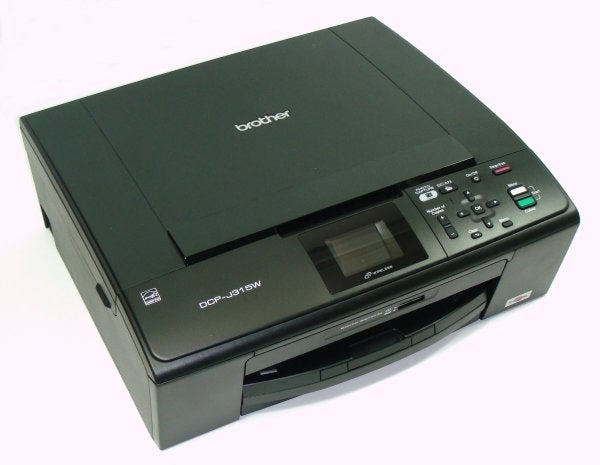 Inside the Brother DCP-J315W, once you’ve lifted the scanner section onto its bright green ‘bonnet support’, is a single USB socket, but most people will probably opt wireless connection, which provides the most versatility.

The four individual ink cartridges slot in, as is normal with Brother machines, behind a hatch to the right of the paper cassette. Fitting them and replacing them only takes seconds.

The speeds Brother quotes for the DCP-J315W are further adrift from those we measured than usual. The company believes this printer can produce ‘up to 35ppm in mono and up to 28ppm in colour’.

Our 5-page text print took 1:42, giving a speed of 2.9ppm, less than a tenth of the speed quoted. In fast (draft) mode, the same file took 36s, or 8.3ppm, still less than a quarter of the posted figure. Just for fun, we ran the draft test again and timed from the start of the print head moving to the last page arriving on the output tray, so excluding any preparation time. This took 22s, a speed of 13.6ppm.

The only way we could reach the quoted speed was to print five pages, each containing just one line of text, in draft mode and not including preparation in our timings. Hardly a reasonable way of testing.

Our 20-page document gave 3.0ppm and the 5-page text and colour graphics test gave 2.4ppm. These times are slow in comparison with other machines in the same price range. Brother claims a best time of 49s for a 15 x 10cm photo, but in normal mode, we couldn’t better 2:22, from a Samsung Galaxy Mini smartphone, Using Brother’s Android print App. 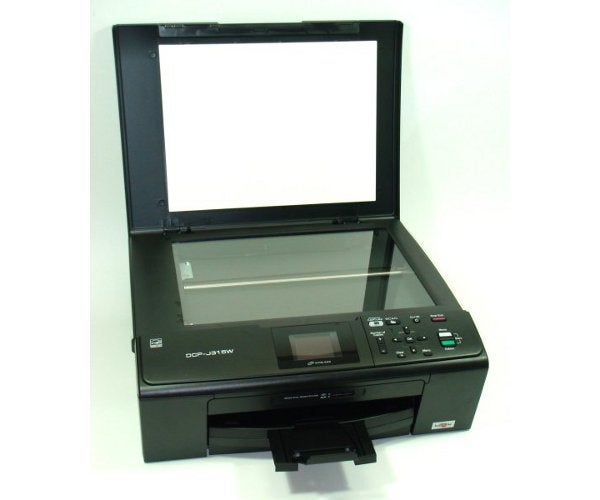 Text print quality is pretty good, without much sign of ink spread, though it looks a little spindly in places. Emboldened sub-heads are clean and black is dense. Colours in business graphics are solid, but a little pale in comparison with originals. This is more true in colour copies, with the scanner losing some colour fidelity. Photo prints are sharp and fairly natural, but quite a bit of detail is lost in darker, shadowed areas.

The Brother DCP-J315W is very quiet when printing and we measured a peak noise level of just 58dBA. This isn’t a distracting machine to have on your desk. 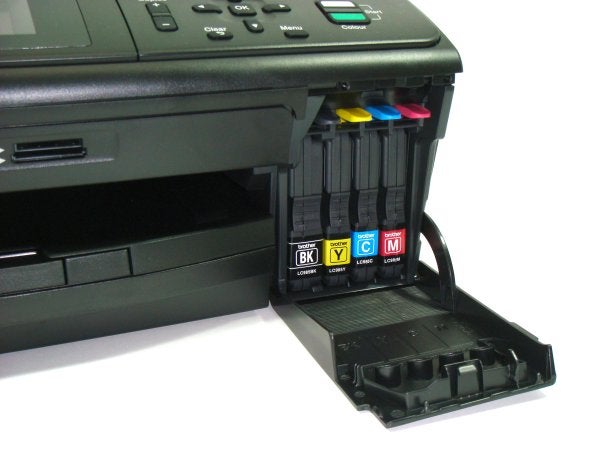 The printer uses four separate cartridges, which normally prove more economic than black and tri-colour ones. Using the best price we could find gives a cost of 5.9p per ISO black page and 12.4p per ISO colour page, including 0.7p for paper. These costs, particularly the black one, are high, compared with printers like the https://www.trustedreviews.com/kodak-esp-3-2_Printer_review Kodak ESP 3.2, which returned 2.0p and 5.3p for black and colour, less than half the price in each case.

Verdict
The Brother DCP-J315W is a straightforward home all-in-one, but without the low purchase price of something like the HP Deskjet 3050A or the low running costs of the Kodak ESP 3.2. Its speed specs are hopelessly optimistic and printouts are fair, but nothing out of the ordinary. In the end, that’s the verdict on the printer, too.