Brother has an extensive range of inkjet all-in-ones and the DCP-J140W sits near the low end of this range, at under £60. It’s aimed firmly at the home market, for people who want basic print, copy and scan functions, but also offers wireless connection to mobile devices, such as phones and tablets.

Like so many Brother inkjets, this is a low profile, smoothly-curved black box, with a small footprint, but greater front to back dimension than some competitors. The scanner lid has a pattern and texture, giving it a quality look, which is slightly diminished by the sparse control panel.

This consists of a single-line, 16-character LCD display and a simple array of 13 buttons to control all its functions. Although the LCD is minimalist, Brother has done well to use it in three parts to show enlargement, copy quality and number of copies, by default. In fact, there are few places where control is made awkward by the small screen. 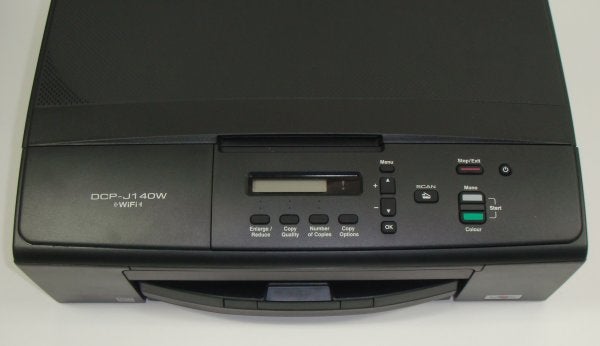 Most Brother all-in-ones sport SD and MemoryStick slots in their front panels, but not the DCP-J140W. There’s no facility for uploading images from card or USB drive and the only physical connection is via the machine’s traditional, internal USB socket.

It will link wirelessly, though and manages to run a WPS setup with hardly any intervention; simply select the option, wait for the enigmatic ‘SETTING WLAN’ display and press the WPS button on your wireless router. A minute or so later the printer is connected. 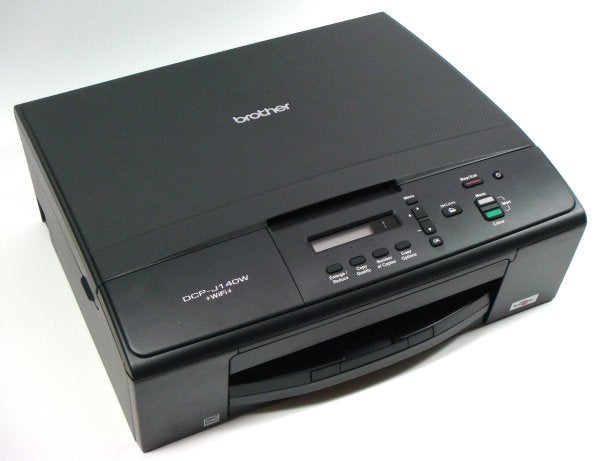 There are no surprises in the rest of the setup. Flip down the cover to the right of the paper tray and you can slide in the four individual ink cartridges. Brother’s Control Center 4 software is supplied, which gives comprehensive control of all the key functions of the machine.

The only other thing to do is load the single, 100-sheet paper cassette, which is used for both plain and photo paper, and the machine is ready to go. A small, extending support and paper stop pulls out from the front edge of this cassette, but is much less intrusive than the output trays of most other budget all-in-ones.

Brother makes fairly ridiculous print speed claims for the DCP-J140W, of 33ppm for black print and 27ppm for colour. Even though these are for draft print, they are still way higher than you’re likely to see in practice. We measured 4.1ppm for our 5-page black text print and even the longer, 20-page document only produced 4.6ppm. Draft print increased the speed, but still only reached 8.8ppm.

Our 5-page black text and colour graphics test gave 3.5ppm so, all-in-all, print speed claims are fairly out of order, though not that bad in real-world terms, measured against price competitors. A colour copy took a respectable 38s, but 15 x 10cm photos took 3:13 at best quality from a PC and 2:08 from Brother’s Android print app, neither of which is that good. 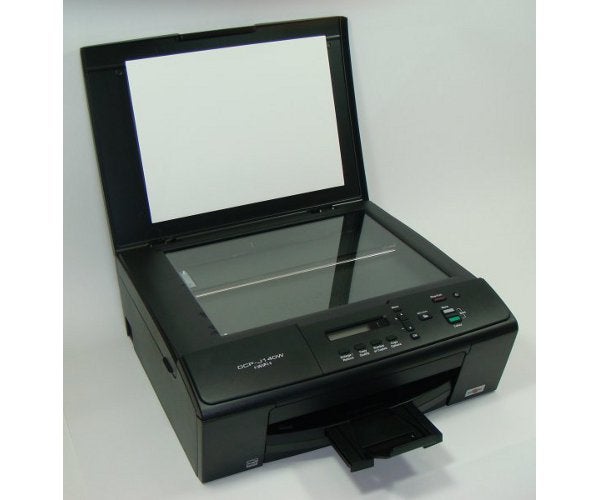 Text print is only fair, with rough edges to characters. Paradoxically, we saw some see-through of paper fibres through character bodies, as well as ink bleed around their edges, giving a fuzzy look. Draft print is very light, though the characters are reasonably well formed and readable, so better than Epson, but not as good as HP. 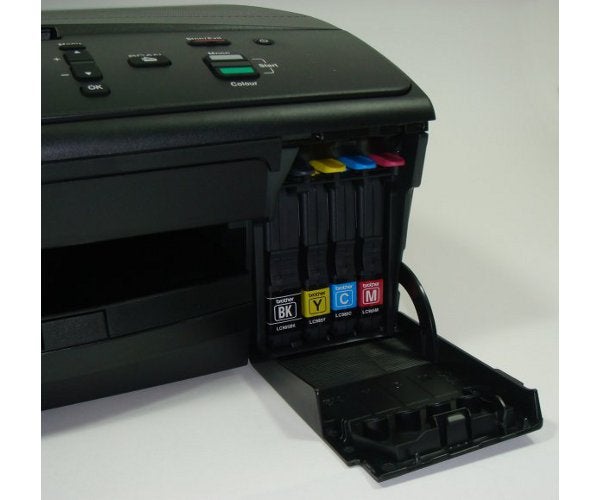 The four cartridges are only available in one set of capacities, which is fairly low at 300 for black and 260 for each of the colours. Using the best prices we could find gives page costs of 5.9p for ISO black and 12.4p for ISO colour, each including 0.7p for paper. These costs are both high, even when compared to other printers in the same price bracket. HP’s https://www.trustedreviews.com/hp-photosmart-5510_Printer_review Photosmart 5510, for example, offers 2.9p for black and 7.3p for colour, under the same calculation.

Verdict
Brother’s DCP-J140W is a serviceable little all-in-one, which combines all the essentials for print, copy and scan in an unobtrusive product. The quick and easy mobile print functions are a bonus, though they’re becoming more commonplace. It’s only when you compare it directly to other machines at a similar price, that attributes like missing memory card slots, slow print speed and relatively high running costs reduce its attractiveness.