Brother has a range of inkjet all-in-ones, most of which use a very similar design on the outside and print engine on the inside. The DCP-J125 is one of the recently launched 2011 range, distinguished from earlier models by the ‘J’s in their model numbers. This one is at the bottom of the range, very much an entry-level machine, but it still offers a good range of the features, which has made these printers so popular. 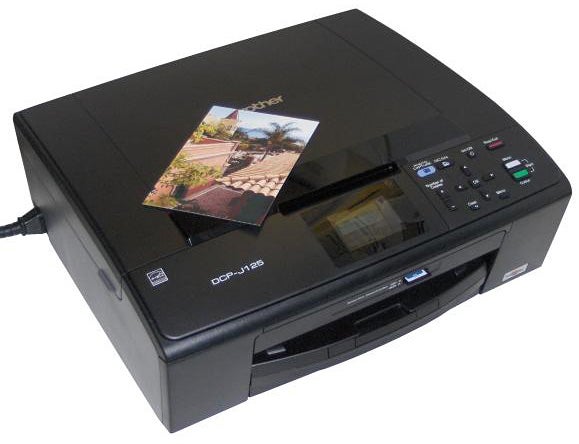 With the same low-profile case and gently sloped top cover, the DCP-J125 uses rather less of the high-gloss black plastic that, to our way of thinking, is starting to look dated. There’s one band along the front of the flatbed scanner cover and a little in the surround to the colour LCD display, but otherwise it’s a more discreet, frosted black.


The flatbed scanner itself is a fairly conventional device, but the scanner lid is on extending hinges, so you can scan books as well as single sheets. Lift the whole scanner section and the USB socket is located near the front of the machine, so you have to feed the cable around inside.

It’s quite unusual to have a colour LCD panel on a printer with an asking price of around £68 and, although it’s small at just 48mm, it can still be used for selecting images from a memory card, as well as displaying system menus.


The controls themselves are pretty straightforward, reflecting the comparatively simple feature-set of the machine. Set into the front face of the printer is a combined memory card slot, which can take SD, MemoryStick and xD cards, and below this is the 100-sheet plastic paper tray, a design common to most other Brother inkjets and one which always feels a little flimsy. This particular tray doesn’t have a photo tray set into its lid, so to load photo paper you have to first extract the cartridge and remove any plain paper that’s loaded. 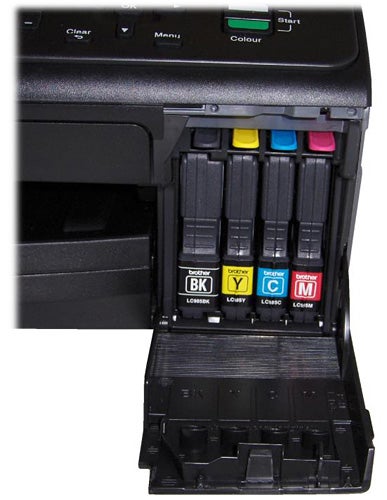 To the right of the paper tray is a flip-down cover, behind which is the holder for the four ink cartridges that slide conveniently into place with a reassuring click. The cartridges have quite a low capacity, but the printer is designed for home use, where this isn’t such a concern.


As well as Brother’s MFL-Pro Suite, there’s a copy of Reallusion FaceFilter, a photo-retouching utility aimed at cleaning up portraits. Drivers are provided for Windows and OS X, though you’ll have to go to Brother’s Solution Centre website for Linux support.

We recently queried the outlandish speeds Brother UK quotes for printer speed with the company and were told that they had to go with what the Japanese parent company specified. We can understand this, but still think Brother Japan needs to reassess the realism of quoting speeds of 33ppm for black print and 27ppm for colour for this machine. 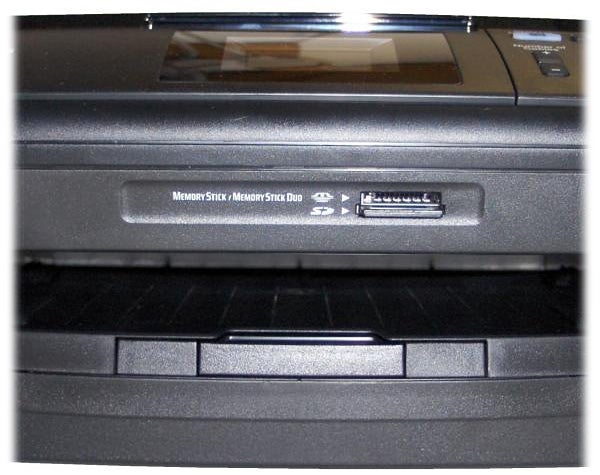 Our five-page black text print achieved a speed of 2.9ppm and in draft mode it rose to 9.1ppm. The 20-page document produced a speed of 3.2ppm and the black text and colour graphics test gave 2.6ppm. Even taking the draft mode test and reducing it by the 15 seconds it takes the DCP-J125 to process the data before starting to print, still only gives a top speed of 16.7ppm, just half the claimed speed.


A single-page colour copy took a reasonable 43 seconds and a 15 x 10cm photo on an A4 page took 3mins 17secs at the highest print quality. At normal print quality, it still took 3mins 3secs, though, which is slow compared with all the competition.


Black text print quality is fair and in normal use, it would be perfectly acceptable. In comparison with machines from most of the other makers, it’s not quite as sharp or as lacking in ink spread, though it still beats most Epson prints. Fast, draft mode print is quite faint and shows some misalignment between successive passes of the print head. 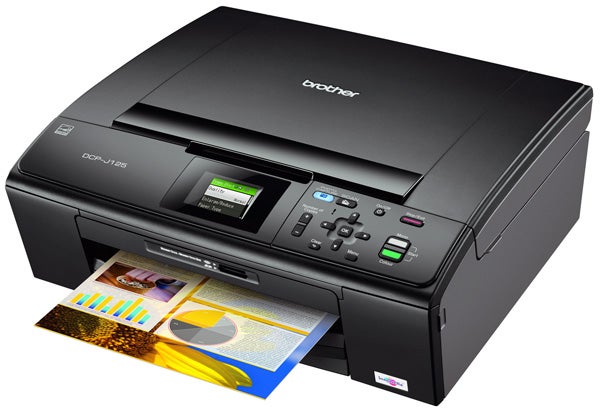 Colour graphics are smooth and fairly well-saturated, though colours could be a bit brighter. This is especially true with a colour copy, which came through in very insipid colours, compared with direct prints.


Photo prints are reasonable, with lighter colours well-reproduced, but dark ones tend towards black, a reasonably common failing with less expensive inkjets.


There’s only one set of ink cartridges available for the DCP-J125, rated at 300 pages for black and 260 pages for each colour, but you can also buy a multipack with all four cartridges at a reduced price. Using this consumable to get the best running costs gives a cost per page for black of 2.3p, with a corresponding colour cost of 8.3p.


Both of these are good in comparison with similarly priced rivals, such as the Canon PIXMA MP495, which has corresponding costs of 4p and 8.6p.


This Brother printer represents better value for money then several others in the same range and does well against similarly priced rivals from other makers. It’s cheap to run for an entry-level machine and while it doesn’t produce the best quality print and is certainly not the quickest, it does have a good range of facilities for a £68 all-in-one.