Brother now has a bewildering range of all-in-one printers on its books, so many that it’s hard to believe it needs another. Although pitched as a high-end device, its price is still well under £100 and for this you get printing, scanning, copying and photo printing in a low-profile printer.


Although a little different in looks from most of its rivals, the DCP-585CW mimics many of its predecessors. Coloured in pale grey, with large areas of high-gloss, piano black, it’s basically a large square box, roughly the size of a vinyl record deck, sloped slightly at the front to take the control panel and Brother’s now trademark double-width, full-colour LCD display. 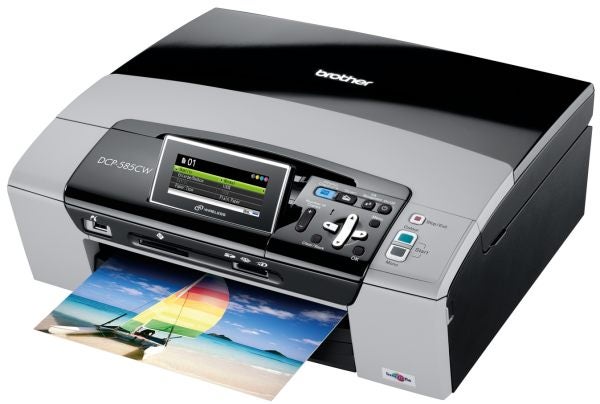 The double-width display is particularly useful when printing from memory cards, as you can view a photo thumbnail at the same time as selecting options for printing. Below the control panel are slots for all the common memory cards and for PictBridge.


The slide out, A4 paper cassette has a secondary, 15 x 10cm photo tray built into its lid, though to use photo paper, you have to slide the whole lid section forward, after first removing the paper cassette from the printer. This is unnecessarily fiddly and means photo prints aren’t easily removable from the all-in-one, without pulling the cassette out. 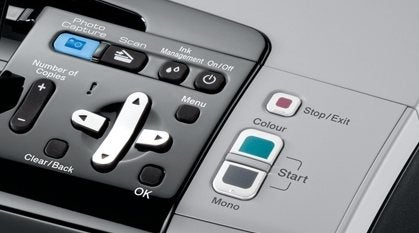 There are three ways to connect this device to a PC: via a standard USB cable, with an Ethernet cable or via a wireless connection, making it a versatile machine to set up in an office. The only slight snag is having to reeve the cable around inside the case, as both the USB and Ethernet sockets are built well inside the machine.


You need to lift the scanner section up on a car-bonnet style prop for access to the sockets. This prop is not particularly easy to release and it’s a bit too easy to let the scanner down on your fingers.


The four ink cartridges are easier to fit than most, as you pull down a cover to the right of the paper tray and slot each cartridge in, in turn. The printer then primes the ink from all four and you’re ready to go. You don’t need to perform a head alignment sequence with DCP-585CW, as the print heads are pre-aligned and last the lifetime of the machine. 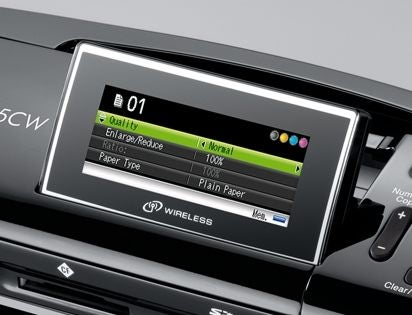 Here we go on the print speed roundabout again, with the quoted figures bearing little relation to what you’ll see in everyday use. Brother quotes 33ppm for black print and 27ppm for colour, presumably both in draft mode, as normal print returns much slower speeds.


Our straight, five-page text document took 1:46 to complete, giving a black print speed of 2.83ppm, but even when we increased the print run to 20 pages, which took 6:41, the speed was still only 2.99ppm. This is over 11 times slower than Brother’s spec. Colour print is no better, with a five-page text and graphics document completing in 2:04, or 2.42ppm. 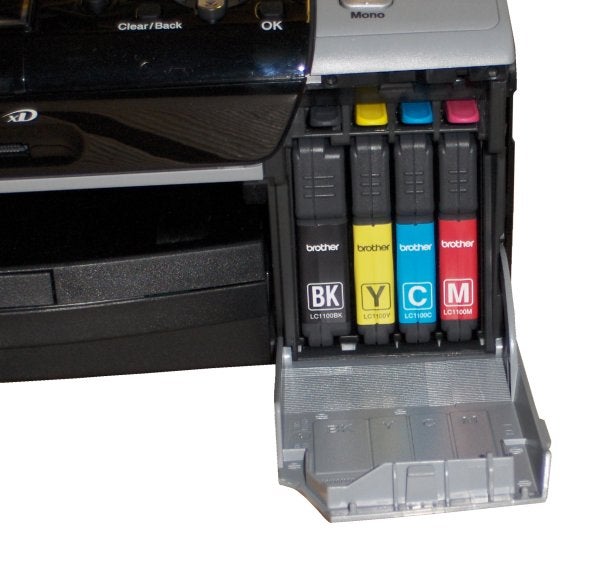 You are going to be waiting around for quite a while if you use the DCP-585CW on anything like a regular basis, though when printing photos, which you’ll see in around 1:40, it’s quicker than many of its rivals. A single-page photocopy, all you can do with no ADF on the machine, took 42 seconds, which again is a reasonable speed.


Printed black text out of the printer is light and under a loupe you can see the paper fibres aren’t completely coated. Even so, there’s some fuzziness around character edges, caused by ink feathering into the paper fibres.


Colours are much too light, too and, although in this case coverage is quite good, they don’t look nearly as bright as their on-screen counterparts. Colour copies look even more faded and washed out.


Photo prints, on the other hand, are generally good, though from our print samples, there is some reason to select Highest quality print rather than Photo mode, as there’s more visible detail in dark areas of the image. Highest mode takes a long time to print, though, with our test photo taking 3:39. 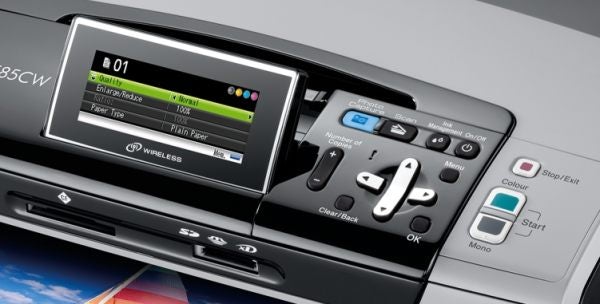 If you read our recent review of the Brother MFC-6490CW, which uses the same cartridges as this machine, you may wonder why the page costs have come out lower here. This is simply because we found a different source for the high-yield cartridges, offering them for considerably less than Brother. The MFC’s running costs are the same as for this machine, of course, if you buy cartridges from the same source.


The four high-yield cartridges are rated at 750 pages for colour and 900 pages for black and we calculate the page costs at 2.64p for black and 6.10p for colour. Both these figures are very reasonable for an all-in-one at this price and with the comparatively high ink capacity, maintenance costs stay low.


This is another curate’s egg printer, which is only good in parts. A bit like Lexmark, Brother seems to have focused on the usability of its machines, with features like a good LCD display and wireless connection, while the features that really need improving are the fundamentals: print quality on plain paper and print speed. Most customers will consider these two the more important.