Sometimes you don’t need all the bells and whistles in an all-in-one, but you do want to save a bit of cash. In these circumstances, something in the middle of Brother’s seemingly endless range of machines should do the trick and the DCP-375CW has all the basics and includes wireless connection, which is becoming more popular by the month.


With only gloss black relieving the frosted black, the case of the DCP-375CW follows the same lines as virtually all other Brother all-in-ones. The lid of its shallowly curved top lifts to reveal an A4 flatbed, though there’s no Automatic Document Feeder (ADF). 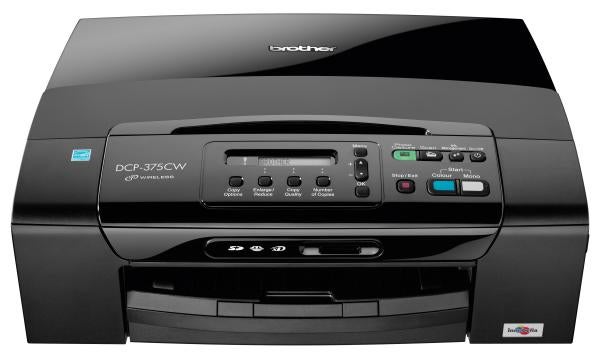 The control panel is simple, as befits the relatively small feature-set of this machine. There’s a 16-character LCD display, with an orange exclamation mark-shaped light to the left, for error conditions – more of which later.


Three buttons, labelled enlarge/reduce, copy quality and number of copies, serve secondary functions as soft keys, particularly when setting up the machine. To the right of the display is a column of menu controls and further along are mode buttons for photo capture and scanning, along with big buttons to start and stop copy jobs.


Set into the front panel is a single, multi-card slot, which can take SD, MemoryCard and xD photo cards. There’s no PictBridge or USB socket on the front panel. A pull-out paper tray below the card slot takes up to 100 sheets of plain paper, or around 30 photo blanks. Both paper types load into the same tray, so you can’t keep both media loaded at once.


USB and Ethernet cables have to be reeved around inside the machine, under the scanner section, but it’s probably easier to set it up for a wireless connection. The mains power plug connects at the rear of the left-hand side, which may not be as convenient as having it at the back. 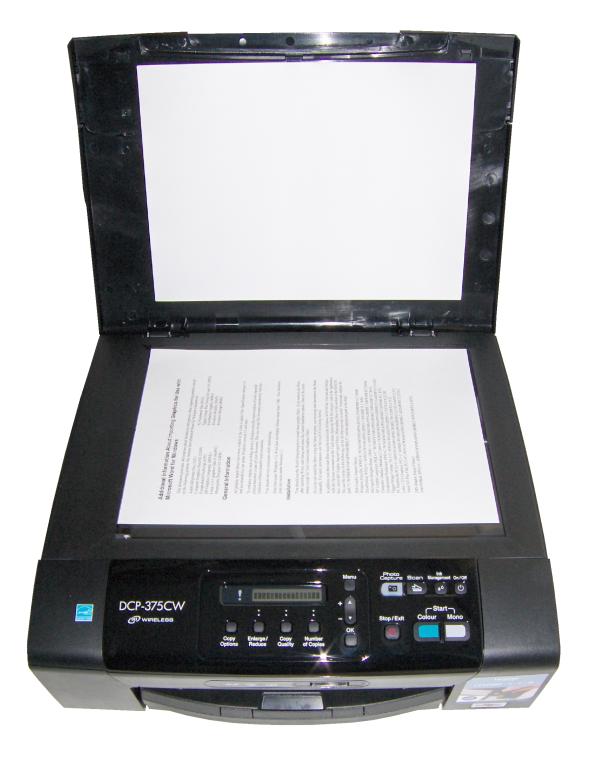 Brother provides a wireless network setup wizard, which is fairly easy to use, apart from having to enter the WEP key on a machine without a keyboard or numeric pad. It takes quite a while to scan through all the available characters using just a single, toggle button.


Following instructions on the single-line display, the four, individual ink cartridges slide in behind a cover at the right end of the front panel, in typical Brother fashion. The system has to charge itself, which takes 5 to 10 minutes, and the printer is then ready to go.


There’s a copy of the PaperPort 11 document manager provided, as well as Brother’s own MFL-Pro Suite and between the two, most eventualities are covered. There are drivers for Windows and OS X.

We had to think serious thoughts, not to laugh at Brother’s ludicrous claims that this machine could print 33 black pages per minute and 27 colour ones. Even in Brother’s Fast mode, where prints are very pale, we only managed 8.57ppm and in normal print, our five-page test returned 2.68ppm.


The 20-page test normally bucks up the speed, though, and it did here…up to 2.93ppm. The five-page colour print recorded 2.08ppm, so not one result over a tenth of the speeds Brother quotes. When is this nonsense going to end? All printer makers ‘enhance’ the speeds of their slower machines, but Brother’s inkjet claims are probably further from what customers will see than any.


A colour copy took 42 seconds, which is reasonable for a machine costing around £80, but our 15 x 10cm photo took 2:39, which is sluggish and a similar print from an SD card took 3:05, which is exhausted sluggish. 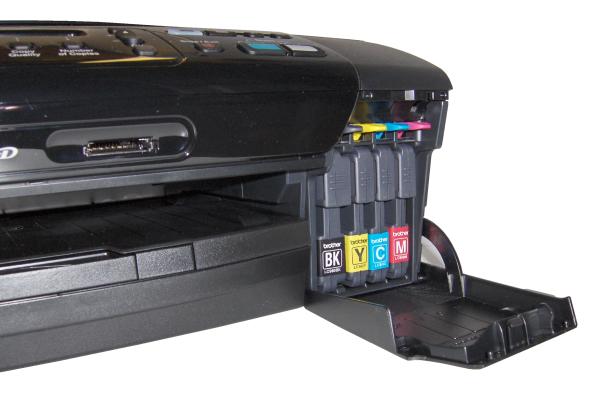 When printing our test photo image, a 15 x 10cm landscape photo on a single A4 sheet, the DCP-375CW also repeatedly misfed the sheet of Brother’s own BP71 paper. The exclamation mark flashed and a message told us to remove the back panel and extricate the sheet of paper. This done, the message wouldn’t go away (we tried every button) and we had to unplug the machine to get it to forget the error condition.


We tried feeding the sheet singly and padding it with a few sheets of plain paper underneath, but still got the same error. Eventually we got it to feed another sheet of paper, from the same virgin pack, by laying half a dozen photo sheets in the tray. It shouldn’t be this fussy; most Brother all-in-ones aren’t.


The quality of text prints is reasonable; better than from a typical Epson or Lexmark inkjet, but not as good as from a Canon, HP or Kodak. Black text is a little under-inked and colours are a bit insipid, particularly on colour copies. Scans also tend to lighten colours in comparison with originals. Photo prints are better, with stronger colours and smooth gradations, but some shadow detail is lost.


The four ink cartridges are the only consumables and Brother helpfully provides a black twin pack and rainbow packs of three or four colours, all of them at discounted prices. Trouble is, these discounts are off the RRP and only appear to be available from Brother. The discounts on single cartridges from other sources are higher than those in the multi-packs so, as always, we used the cheapest prices we could find.


That gives a black page cost of 4.79p and a colour one of 12.31p. Both these figures are high; compare them with the £75, Canon PIXMA MX320, where equivalent pages cost 4.09p and 8.78p. Quite a bit less – particularly when producing colour – for better quality print.


The concept of a range of small-footprint all-in-ones to suit all needs is a good one but, as with Lexmark, Brother has taken its eye off the ball. The top factors in buying any printer are print quality, running costs and print speed. In the case of the DCP-375CW you’ll have to have to wait longer than you should for expensive, unimpressive prints.