Inexplicably, Broforce calls to mind what Pro Evolution Soccer would look like if Hideo Kojima and Konami were still friends, and he was in charge of the beloved football franchise. Harking back to the days when player names were copy-written and you had the likes of Petr Schmeckles between the sticks for Manchester United, knocking a goal kick out to Rylan Giggles on the left wing, who’d set Erik Canteen up to score for the Red Devils.

Because it’s that kind of pun-work, that style of deft comedian-like fortitude that permeates through every pore of Broforce’s narrative – it’s that outright silliness that makes it what it is. Also, if you don’t know much about football, just know that what I wrote there was very funny. You’re welcome.

As side-scrolling shoot-em-ups go, there’s nuance to Devolver Digital and Free Lives’ run-and-gunner on Switch you’d be forgiven for missing upon first glance, but there’s also a healthy challenge, references that may be lost on a younger generation, and, yes, a humour that’s not going to appeal to everyone.

It’s important to mention the humour and inherent politicism, however. This is a game that embraces American patriotism while simultaneously ripping it to shreds. There’s a chance that people wearing Stars and Stripes pyjamas might mistake it for reverence, but that’s not what’s on show here. There’s a deft satire just below the surface. 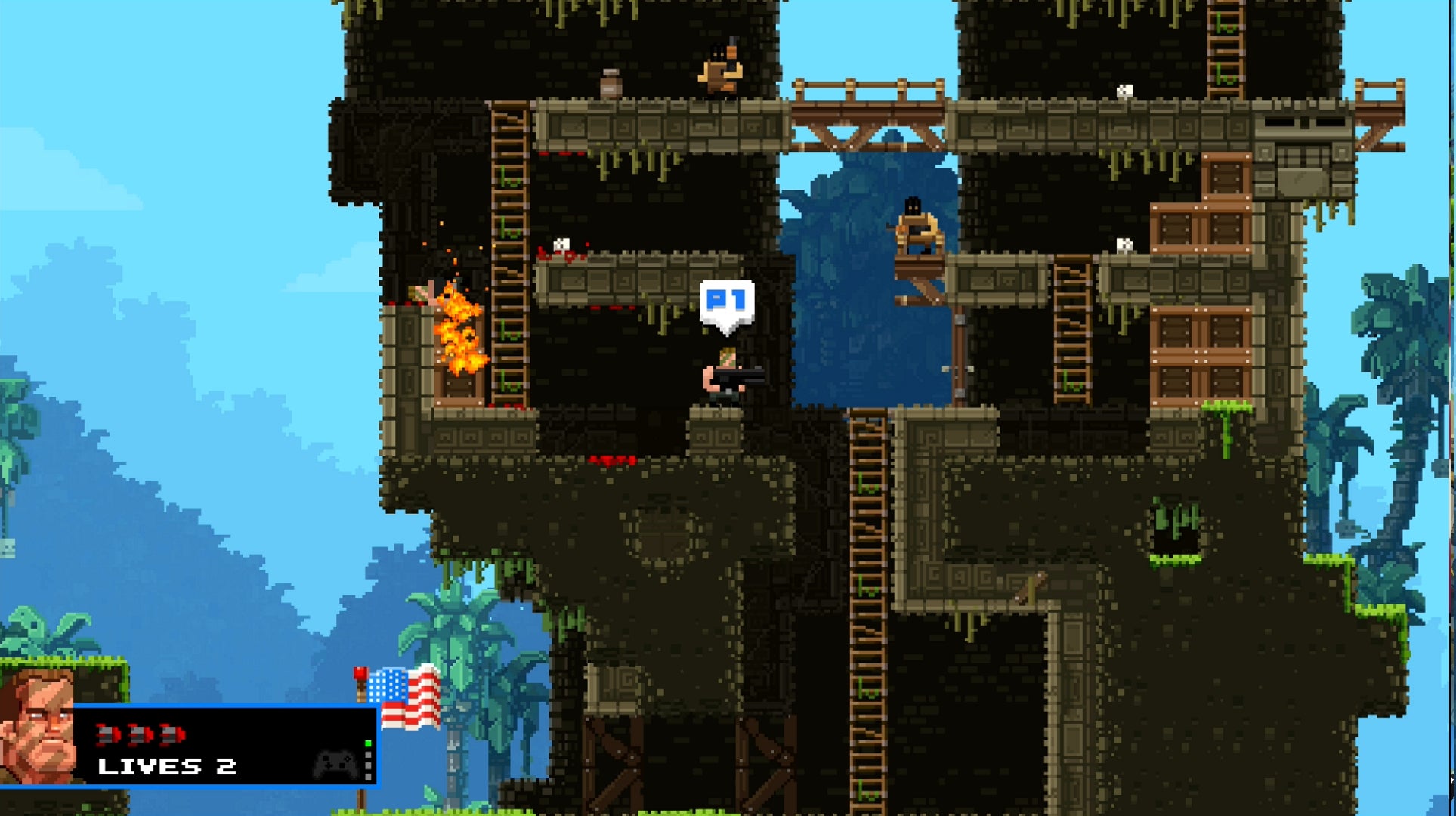 Anyway, here Gruff military bosses that aim to lead you to victory against unnamed foreign insurgents will bark orders at you, and after you’ve taken them (and half the level) out you’re treated to metal guitars shredding as you raise the flag and escape on a helicopter while the landscape you’ve left behind is afire. Explosions litter the sky, perhaps both as an allegory for fireworks but also, well, very actually as fireworks to celebrate your victory against the bad guys.

This is a game that’s brutally on the nose, taking nothing seriously, yet also sort-of paying homage to movies that inspired the 80s aesthetic it riffs upon. In a way it’s confusing: it loves action movies, but is sort of mocking how daft they can be as well.

Within the homage  lies that Kojima/PES marriage, because Rambo, Die Hard’s John McClain, Ellen Ripley, Chuck Norris, and many more are in this game, but they are also definitely not in the game because of licensing reasons. Then again, maybe the developer just thought it’d be funnier to do it this way. Instead of Rambo we have Rambro. We have Bro Hard, Bro Dredd (guess which comic book character that is a take on?), Brade (I’ll give you that one, it’s Blade), and MacBrover (MacGyver) among others. Some are hit and miss, but it has to be said that seeing The A-Team’s B.A. Baracus in cartoon form as “B.A. Broracus” is a work of comedic art, even if it might have been even funnier to have his real name in there, but as Mr. B.

Alongside the names, each Bro has a unique talent. While Rambro is your basic starting run-and-gunner, throughout the destructible landscape-levels you adventure across, you will unlock more Bros from captivity. Broracus has a flamethrower and can make corpses explode, MacBrover throws TNT, so on and so forth.

The Bros all feel quite different because, aside the obvious differences in weapon, they will also have a set number of squares for their range, or a variance in damage. While it may look simple, Broforce is a challenging, interesting game offering a huge number of Bros over the entire campaign. You’ll have favourites and some that you die almost instantly when using; each Bro offers its own challenge to overcome. 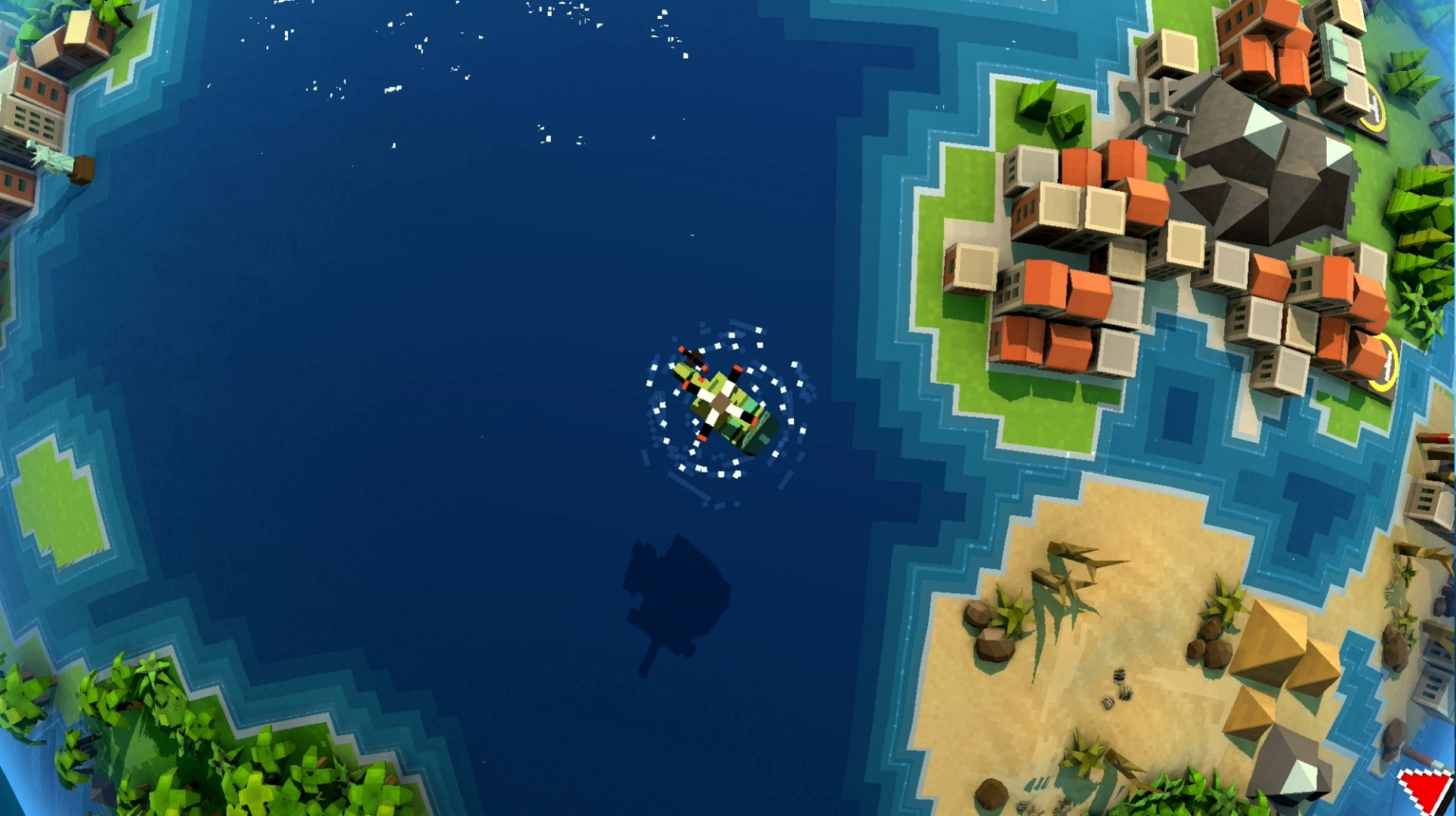 It’s worth noting that Broforce isn’t easy, either. The basic gist is easy to grasp in that, essentially, you’re being ask to blow everyone and everything up, rescue your pals, and finish the level, but bosses, solo bro missions (solbro?) and stealth maps change things up, some offering a high level of difficulty and an almost puzzle-room mentality.

Because you will blow the level to pieces as you rampage through it, you’ll create insta-death holes too, but adapting to the pace of Broforce is rewarding, only occasionally marred by that odd frustrating fall-death or barrel explosion you triggered but didn’t mean to.

On a standard level, death just means you’ll respawn as the next Bro on the list, but in maps that require stealth you might only get one Bro and one life, and that means you have to be clever and plot out your route through the level. Thanks to the environments being destructible (and yes, red barrels and exploding things are everywhere) some locations ask you to shoot your way through, perhaps dropping heavy objects on the larger bullet sponge enemies, giving you a safer route through the flotsam-like enemies blocking your path in their absence.

Part of the difficult also comes via the random nature of your Bros, which are also your lives. Respawning as a Bro you really don’t get on with will make it more difficult, and it’s tempting to just throw that life away, but as the enemy numbers ramp up, you won’t want to waste a life.

When the stars align and you get to play as Blade (sorry, Brade) against an attack helicopter, meaning you can use Brade’s ability to air dash and then attack the chopper, it’s great. When you’re stuck with MacBrover for a life, who can throw dynamite and generally feels like a pain to play as, it’s not so great. (Ed – MacBrover is my personal favourite, so…) 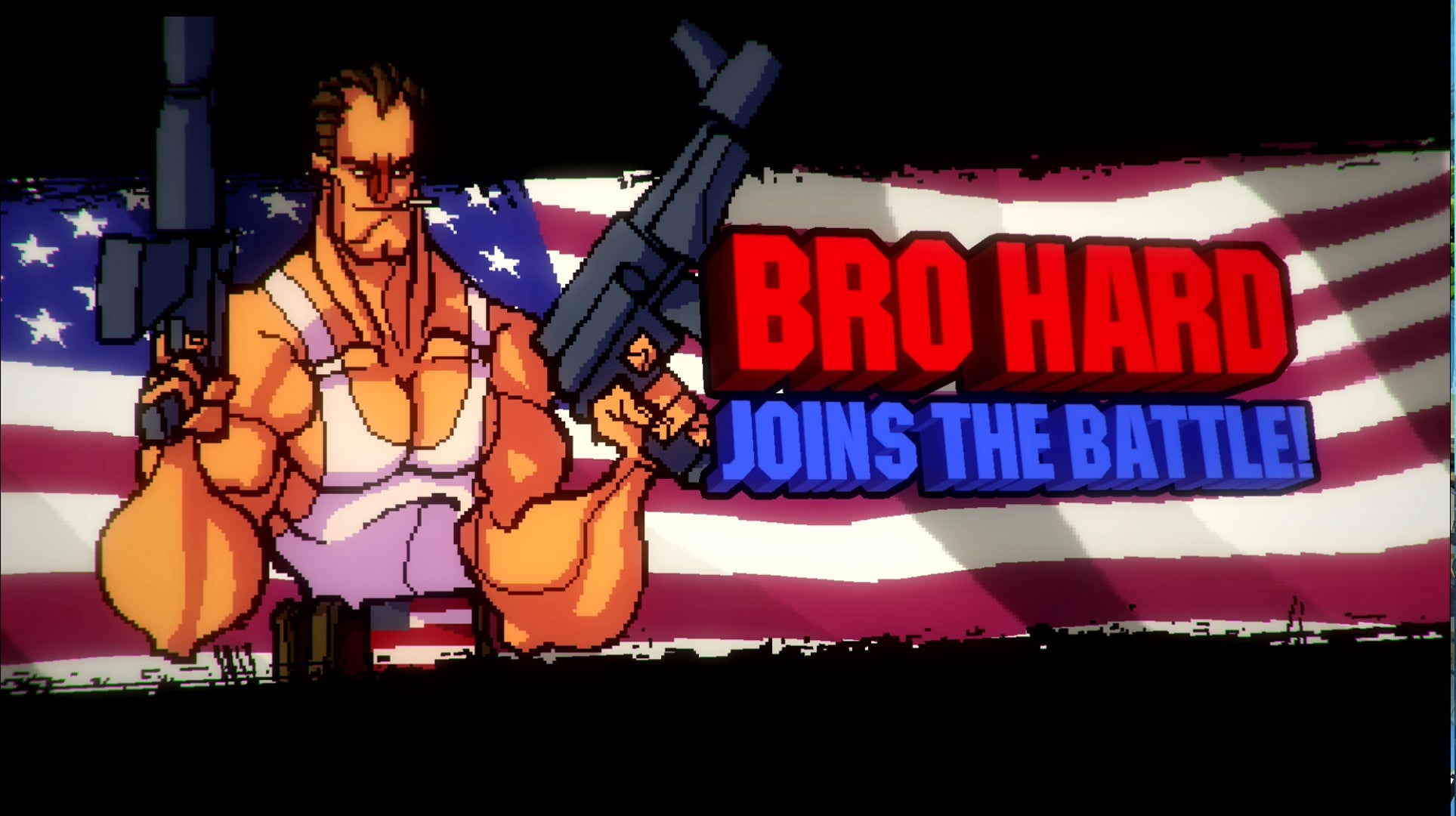 Enemy design is in-keeping with the fun design shown throughout, and there’s plenty of game here to keep you going. In addition to the campaign (which can be played cooperatively either online, or off) and playing with others is exactly as mad as you can imagine. Thankfully the Switch version is fine with the multiple explosions going off everywhere: it performs just find under strain, and that’s vital because you’ll be jumping around and climbing up walls with your combat knife a lot. It gets frantic, this one.

Whether you take the “Bro” elements for what they are, which is to say a daft gimmick to add an extra layer to a fun, challenging, carefully crafted love letter to the 80s, is up to you, but nothing about Broforce is serious bar the difficulty and dedication to the bit. If you’re the type to roll their eyes at a bad pun while others around you snigger, you might still enjoy the shooting, but this is a full on mickey-take on the Team America generation that will be like nails on a chalkboard to some.