It is the latest entry into the burgeoning smart thermostat sector and offers not just remote control over heating but also hot water. Intriguingly you don’t need to be a British Gas customer to fit Hive, which shows how keen even major energy providers are to make an initial land grab. Furthermore, while initially offering self-install, British Gas now professionally fits all Hive units, which sets an interesting precedent against its DIY rivals.

So can the UK energy giant teach some of tech’s most innovative rivals a few tricks?

GUIDE: Smart Thermostats in the UK 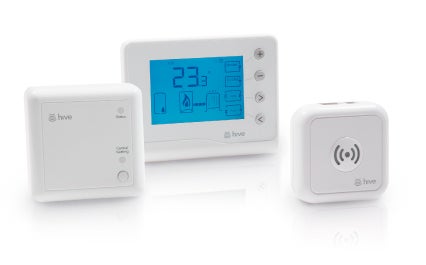 Like Tado, the Hive system comes in three parts: a boiler control unit, wireless thermostat and hub that connects to your router. The most obvious difference is the Hive thermostat has a display with manual controls so you can always see the current temperature and switch it up or down. With Tado this can only be done via web browser or phone and tablet app and it is reassuring to have this backup method at hand.

Far more interesting is what they can do. The focus of Hive is anywhere control. This means not only using your computer, phone or tablet to adjust the air and hot water temperature, but using them to set bespoke daily schedules.

Like its rivals, Hive also has inbuilt frost protection, which means if you switch everything off when away it will not let the temperature drop below seven degrees to ward off the formation of ice that could crack your pipes. Like Tado, Hive will monitor the outside temperature as well so it doesn’t heat the house unnecessarily if it is going to be a warm day.

The big omission compared to both Tado and Nest is location detection. Both of these products actively monitor where occupants are so when you leave they turn down the temperature automatically. When they detect you are heading home they gradually warm the house back up. This smart continual adjustment has to be remembered and done manually with Hive.

Another surprise is British Gas has built-in no advantages for its existing customers. There is no way to integrate your British Gas bill or compare your savings in real-time from your tariff. What you potentially save will have to be worked out by comparing your bills when you give metre readings. We’re sure this omission will be plugged in future, but we’re surprised Hive came to market without this obvious differentiator. 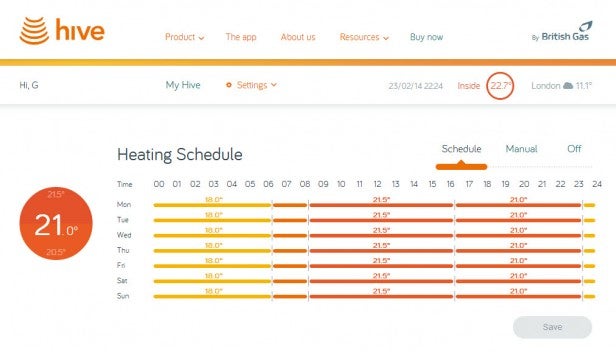 While its rivals give users the option of professional or cost saving DIY installations it is interesting that British Gas has quickly pulled the latter after initially offering it. As such Hive has a fixed £199 RRP that includes installation and, while different systems will present different challenges, in our case the engineer had it up and running within 30 minutes.

There are a couple of quirks to the install. Like Tado both the boiler controller and hub need a secondary power source. The former can often be taken off the mains (and will be present if you already have a digital thermostat), but the latter requires a connection to a power socket. Here Tado was more elegant as its hub can take power from the USB port that is present on the back of most modern routers and cuts down on cable mess.

Where British Gas has done an excellent job, though, is the user interface. The company has taken design queues from the flat look of iOS 7 and its minimalist appearance is elegant, intuitive and shared across browser and mobile apps. As ever iOS and Android lead the way with the arrival of a Windows Phone version unknown. One frustrating aspect to both iOS and Android, however, is the apps lack persistent sign in so you have to login every time you open it (even if you exit for just a moment). We hope this is addressed in a future version.