What is the Breville VBL060 Soup Maker?

One of the biggest issues soup makers have is cleaning the parts that come into contact with food. The Breville VBL060 is different in that respect, so it’s no surprise that this machine has been a popular choice for some years.

It completely disassembles to be cleaned, right down to separating the six-way angled blades from the jug’s base. As well as having a heating element in the motor unit for making soup, it’ll also stir ingredients with its blades, sauté and includes recipes for sauces and desserts. Its large-capacity glass jug will make up to 1.4 litres of soup at a time, plus it functions as a standard blender with four speed settings and pulse. 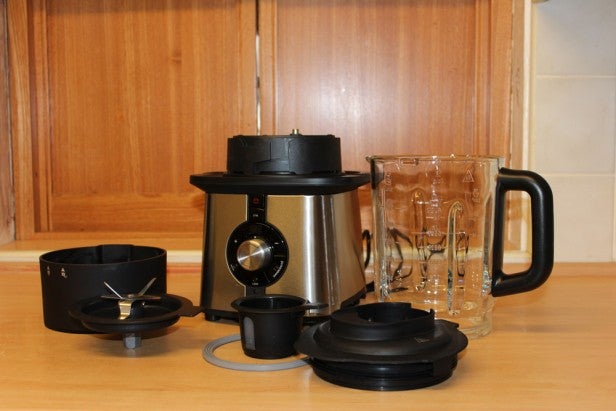 Boasting the good looks of a blender with a few practical additions for making soup, such as an easy-carry base with handles and tight-fitting lid with a removable measuring cup, the VBL060 is unassuming from the outside. It’s inside where its thoughtful design starts to shine. Not only is the cooking plate below its blades non-stick, there’s a band that fits inside to help form a leak-free watertight seal between the jug and its base. The jug also has units of measure on the outside up to maximum amounts for cold liquids and soup capacity. 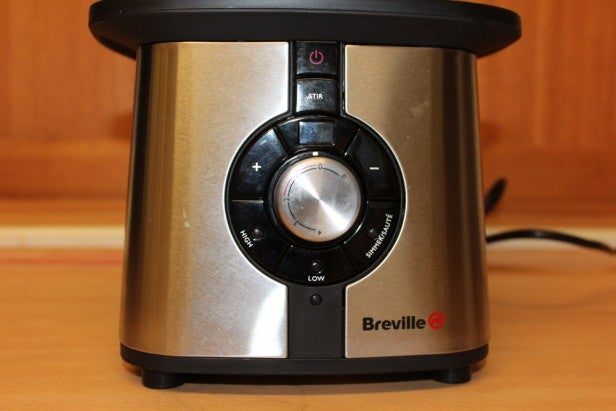 The controls are located on the base unit. There are two temperature settings for cooking soup, High and Low, a Simmer/Sauté for browning ingredients at the start of recipes and for adding creamy ingredients at the end, and buttons for increasing and decreasing the cooking time, shown by a display. A handy Stir command rotates the blades to mix ingredients, while a central dial controls the machine’s blending.

The soup cooking functions need to be deactivated in order to use the machine as a blender – a good safety feature to prevent accidental blitzing of hot ingredients without the lid in place. 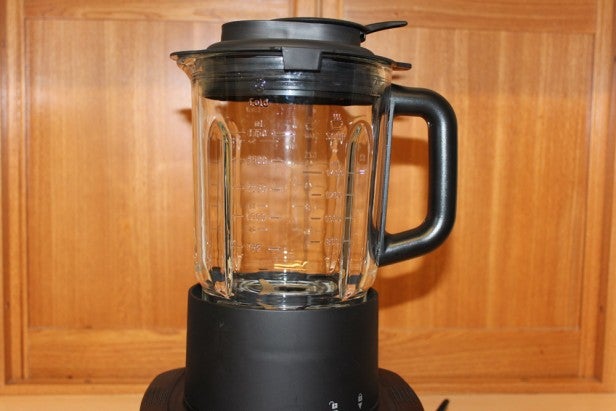 Breville VBL060 Soup Maker – What’s it like to use?

While it’s fantastic that the soup maker comes apart for thorough cleaning, what this means is that it has to be assembled each time before using it. There are good instructions on how to do it but the first few times might be tricky – for example, the band to seal the jug to its base needs to be slightly damp and unless the jug is twisted fully into place, it won’t lock in to the motor unit. Once put together, operating the machine is simple.

We made a tomato and basil soup, so started by sautéing onions in oil using the Simmer/Sauté function. The Stir function came in especially handy here – it’s more powerful than most and lifts ingredients up effectively, making it a wise idea to have the main lid in place even when there are only small amounts of food in the jug. The Simmer/Sauté function works while the timer is set, so preparing ingredients in advance is a must or it feels like you’re cooking against the clock. 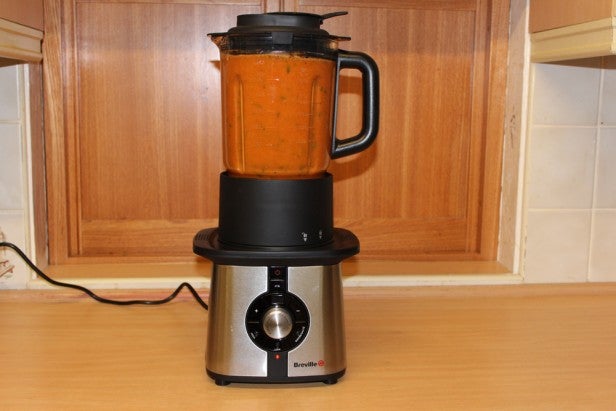 Once the onions had started to sizzle, the rest of the ingredients could be added and the setting changed to High. Unlike soup makers with programs, the biggest drawback of this machine is that initially there’s no walking away and leaving it to cycle through a cooking and blending programme by itself. Instead, the recipe called for waiting for the contents to come to the boil – something that has to be watched for as there’s no alert from the machine to let you know when it’s reached the right temperature. This took a few minutes and had to be double checked by looking into the jug from the top as it’s not obvious from outside.

Once the soup was boiling, it could be switched to the Low function and left to finish cooking. After the timer had counted down, the machine keeps the soup warm for up to 40 minutes. It could then be blended to the desired consistency by exiting the soup mode and choosing a speed setting or pulse.

The resulting soup was perfectly cooked and mostly smooth. Once the machine had cooled, it could be taken apart and popped in the dishwasher. It can be washed by hand but some parts, such as the sealing band, retained discolouration when cleaned this way. 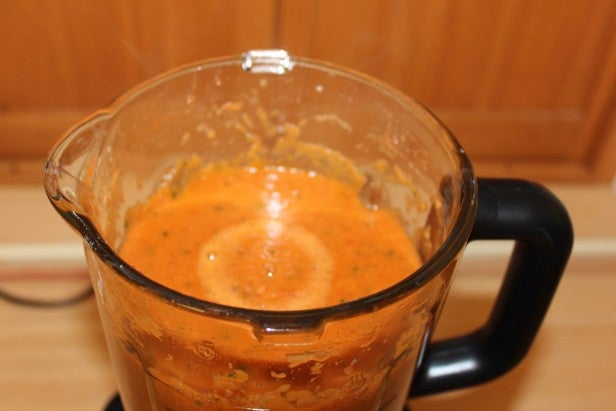 Should I buy the Breville VBL060 Soup Maker?

If you’re in the market for a soup maker but want every part of it to be scrupulously spotless every time and dislike scrubbing, this is the machine for you. Its ease of cleaning and non-stick base make it a good low-maintenance choice and putting it together should become second nature with regular use. The option of programmes would make it a dream machine but what it lacks in automation, it makes up for in versatility and control.

Ideal for families, as it’s safer and less mess than a hot pan and stick blender combination. This soup maker could be a permanent worktop resident.