Until the iPod came along and turned ‘ripping’ from something that applied to fishermen’s yarns to something you did with a CD, digital music was the premise of the computer enthusiast. Obviously a lot has changed since the first Apple portable players were brought out in 2001, but still, it seems, the impact of Apple’s player has yet to make a serious impact on the world of ‘proper’ hi-fi.


Obviously, there are plenty of iPod hi-fi systems on the market, and some are very good. Check out Riyad’s review of the B&W Zeppelin, which coupled great design with wonderful sound quality. I was also impressed with Fatman’s iTube system when I reviewed it at the end of last year – a valve amplifier with an iPod dock attached. 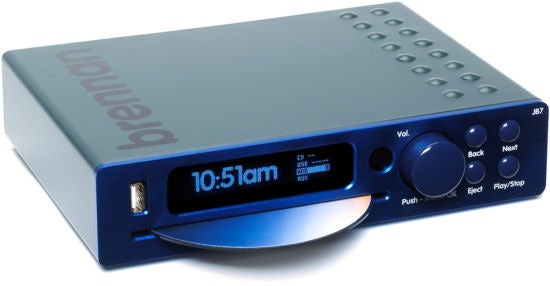 But not everyone owns an iPod, and using one as your main hi-fi isn’t a particularly great way to browse music from the sofa – the screen is fine from a metre away, but sit on the sofa and you’ll struggle to make out what’s going on the 2.5in screen of an iPod Classic.


As an alternative, I think you’d struggle to match the simplicity and elegance of the Brennan JB7. Now I’d always prefer to use an audio streamer to listen to my digital music collection, pumping a digital signal out through a DAC to my amp and speakers, but that adds a layer of complication (and mess) that most people simply can’t be bothered with. This device keeps it simple, allowing you to rip CDs directly to its internal hard disk and listen to them from there. 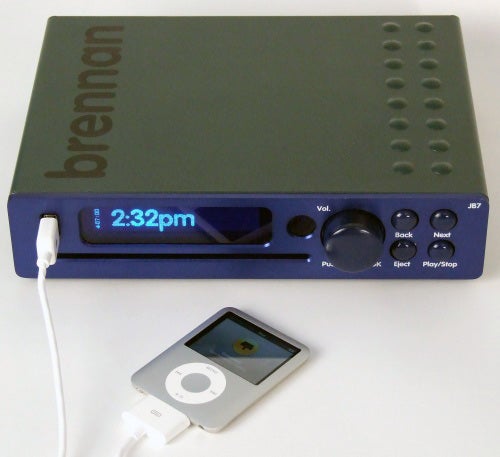 And it’s as easy a device to use as the original iPod. Minutes after plugging it in and hooking it up to a pair of speakers I had ripped a couple of CDs and was happily listening away to them. All you do is pop a disc into the slot-loading drive, hit the big round button on the front and a few minutes later the JB7 will have compressed and transferred the tracks directly to the device’s hard disk drive. A mighty impressive performance from a component this small.


You get the option to rip CDs in uncompressed state, at 320Kbit/sec, 192Kbit/sec or 128Kbit/sec, and with a built-in music database from CDDB, the device should recognise most CDs’ titles artists and track names without recourse to the remote control’s keypad. It struggled with a couple of newer discs I stuck in but you can manually name albums, which doesn’t take long, and updating the database is a simple matter of downloading the ISO image from FreeDB, burning it to a blank CD-R and sticking it into the device’s CD drive.

Once you’ve ripped a few discs, browsing is straightforward too. The bright blue display uses the same vacuum fluorescent display as the Logitech Squeezebox and its large lettering makes flipping through albums, songs and artist names a joy – no more squinting from the sofa. You can do the expected digital music stuff, such as shuffling tracks and browsing by album, plus there’s a text search, which works brilliantly for when you get bored of browsing, title-by-title.

Bizarrely, though, despite the onboard database, which catalogues genres, artist names, composers and so on, the JB7 only lets you search and browse by track and album name. And you can’t manually name tracks either. Apart from this, the only thing the JB7 is in need of is a decent remote control – it’s grid of blister buttons makes it extremely difficult to use straightaway until you’ve got used to it.


It’s a shame as the rest of the system is luxuriously well-appointed, and is as well-designed as the interface is easy-to-use. It looks and feels smart with its rubberised grey casing and electric-blue aluminium front plate, and practical features abound. The front panel is adorned with a large, clickable knob used to select and browse music, and for adjusting the volume when music is playing. Other controls are limited to four buttons for play/stop, eject, and skipping back and forth through tracks. 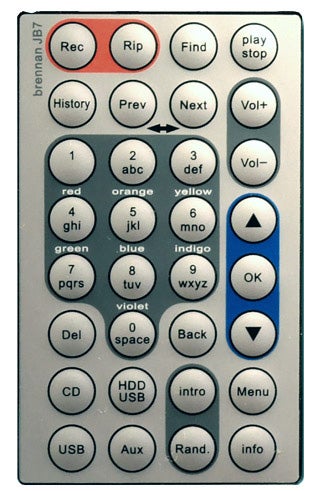 There’s also a USB socket on the left edge of the front panel for not only hooking up an MP3 player, external hard disk or thumb drive, but also to back up the music you have stored on the JB7 to an external hard disk and load music the other way. If you already have your music ripped to disk, this is a great time saver, though it’s worth noting that the Brennan is restricted in the format of music files it will play back – only MP3s are supported.


But do you want to know the best bit about the Brennan JB7? It’s the sheer size of the thing. Incredibly, all these features are packed into a chassis just over one-and-a-half times the width of a CD (220mm) and a mere 48mm high. It’s a great box for anyone with a penchant for minimalism, or who can’t afford a spacious, four-bedroom house.

And I haven’t yet reached the end of the JB7’s feature list. Packed into its tiny frame, along with the hard disk, is a 30W per channel amplifier and a set of spring clip terminals on the rear panel to hook up a pair of standard speakers – basically, all you need for your digital music system. The rear panel also boasts a 3.5mm headphone output, 3.5mm line-out and, handily, a 3.5mm stereo aux in. The latter enables you to record that analogue source direct to MP3.

Given all of its features, I almost don’t care about how the JB7 performs – it’s that good at what it does elsewhere. But to complete the picture, I can report that it’s a very capable little player. In fact, given all the electronics and amplifier built into such a small box, it’s surprisingly good.


I wouldn’t go so far as to call it outstanding, though. I hooked up a pair of Sonus Faber Concertino speakers to the spring clips, played the Killers’ excellent album ”Sam’s Town” through it, and though the JB7 picked out all the detail in the complex tracks, it lacked a little dynamic range – there wasn’t quite as much punch to the music as I’d like. The same applies to the bass output: shove a bit of Jamiroquai through it and the normal squidgy bottom-end fails to come through with as much control as it could.

But that’s probably just me being picky. After a few hours of listening, I hardly cared about that at all – there’s plenty of volume and the Brennan never gets too muddled whether you hit it with complex classical, such as Mahler’s 6th Symphony, Metallica’s classic ‘black’ album or Ulf Wakenius’ cool Swedish electric guitar-based jazz. The Brennan manages to sound crystal clear and unstrained throughout. As I said earlier, despite the niggles, this is remarkable in such a tiny all-in-one box, and it’s worth sacrificing a little storage for quality: the JB7 loses some of its musical depth when you rip at 128Kbit/sec, so it’s a good idea to rip at higher bitrates.


As a compact, stylish digital music system, the Brennan JB7 is hard to beat, but it offers so much more than that: USB input, backup and file transfer, recording from external sources and CD ripping that really couldn’t get any easier.


There are niggles, of course, such as the horrid remote, and sound quality could be better for the cash, but these are small in the face of what is a highly successful overall package. If you’re in the market for a decent iPod music system, you might want to consider one of these instead.