Anyone who thinks the Japanese RPG is moribund needs to take a second look at the Nintendo 3DS. Between Xenoblade Chronicles 3D, Fire Emblem: Awakening and the first Bravely Default, Nintendo’s handheld has carried some of the finest JRPGs of the last few years – not bad in an era defined by such bloated disappointments as Final Fantasy XIII and its sequels.

Now Bravely Default gets a follow-up, Bravely Second: End Layer, which isn’t just another great 3DS effort but a great JRPG, full stop. In fact, it’s hard to imagine a game better suited to pulling lapsed Final Fantasy fans back into the fold and proving that there’s still life in the old genre.

Be warned: if you haven’t played Bravely Default, then Bravely Second will give the whole plot away within the prologue. On the other hand, you don’t have to have played the first one to get stick straight into the sequel. While you might not fully understand the world or the recurring characters, you’re still going to get a compelling new plot and new protagonists, and it won’t take you long to get up to speed.

Here our central hero is Yew, one of three bold comrades sworn to defend the Crystal Orthodoxy and its leader, Pope Agnès. When Agnès is kidnapped by the evil Glanz Empire, led by the stylishly nasty Kaiser Oblivion, Yew and his chums race to rescue her from the Kaiser’s floating Skyhold.

Sadly, fate has other plans, and before long it’s up to Yew to put a new team together, chase the Skyhold, slay demons and give the Kaiser and his minions their comeuppance. 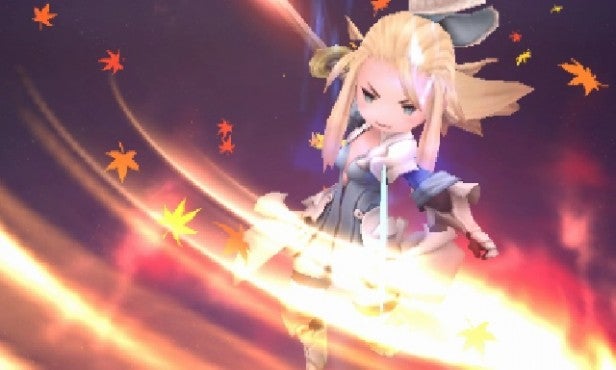 At first, it all seems disarmingly simple. Yew is the classic bold but inexperienced youth of pre-Final Fantasy XIII JRPGs, before all those spikey-haired emo teens stole the mantle. The plot seems a straightforward rescue saga, while the gameplay comes down to roaming around dungeon areas linked by a larger map, killing monsters, grabbing treasure and building up experience all the way.

Even the combat system is classic old-school JRPG material; you select your team’s actions, hit Go, and your warriors and their foes take turns battering the blazes out of each other until only one side is left standing.

But it’s not long before Bravely Second starts layering on more complexity. For a start, it has the same clever twist to the combat as the original Bravely Default. Rather than act on a given turn a character can Default, putting them in a guard position where they store up energy.

The next turn, you can Brave, effectively using your stored turn as a second turn. You can Default multiple times for – depending on your level – two to four attacks, and you can also Brave without Defaulting, which means taking your next turn in advance in the hope that you can end the battle swiftly. Just this one change adds new depths of strategy.

Yet that’s not all. You can also Bravely Second (just like the title), slowing down time to give you a greater chance of a critical strike. Then the game ditches conventional classes for a series of jobs, each one with their own perks, different effects on weapons and armour and their own special abilities, attacks and/or spells to learn. You can switch jobs at any time, with each one levelling up independently of your character level, and while you have a job your learning new abilities within it. 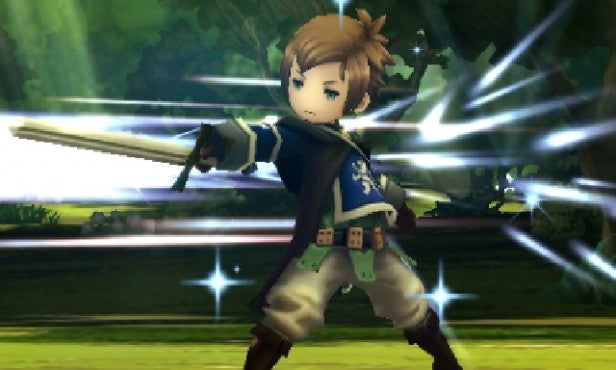 Some of these are primary, meaning you can only, say, cast fire spells while you’re playing a wizard, but others are secondary, allowing you to use them even if you switch to another job. The more you play, the more jobs become available, each one requiring a small gem – an asterix – won by defeating its current bearer in battle. With a squad of four characters and over 30 jobs to collect, there’s no end to the variations, and when the jobs run from Valkyrie to Exorcist to Catomancer, there’s plenty of impetus to keep on finding them.

As with any JRPG, the combat can grow grindy, but the team at Silicon Studio has done everything it can to remove the friction. Think wandering monsters are a pain? Well, one of your team has a skill for avoiding battles. Bored of battling smallfry? You can set your team to auto-battle, repeating the same moves until you halt them and tell them otherwise.

There’s a bizarre fast travel system involving psionic pigs and you can slip through conquered dungeons to get through to the other side. You can even save whole party configurations, allowing you to build powerful combinations of jobs, skills and gear for different situations, then switch between them at will.

There’s also a clever system for getting online help. Make friends with other Bravely Second players through the Internet or Street Pass and you can call on their characters to aid you momentarily in combat. Make your heroes available and updated and your friends can do the same with you.

On top of that, we get a base building sub-game and a weird collect-and-craft mini-game, giving you even more stuff to do in-between life-or-death quests. 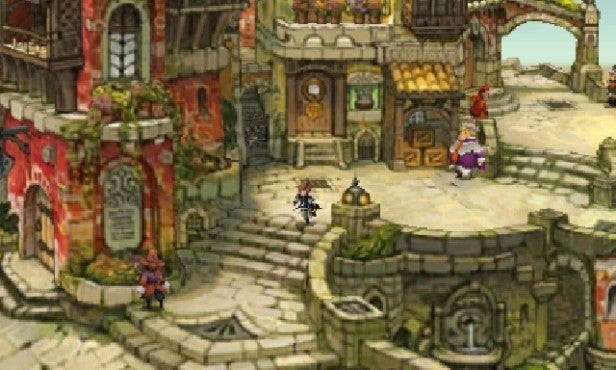 No game gets everything right, and Bravely Second has off moments. A handful of boss battles are too reliant on cheap attacks, while the way that some status conditions – particularly blindness – don’t wear off can be a pain when you’re being spammed with sudden blinding or sleep attacks in a dungeon far from town. Still, it says something that these few fun-wrecking bits stand out so much.

It’s not just the mechanics that make Bravely Second brilliant, however. After the glum, generic visuals of Final Fantasy Explorers, it’s great to see a 3DS JRPG that plays to the strengths of the system, delivering beautiful, intricate pre-rendered backgrounds and well-designed characters and monsters, then ensuring that they actually look better in 3D. Turn the slider up if your eyes can manage it, as Bravely Second has some of the best depth effects on the 3DS. Turn the volume slider up while you’re at it, as the score is up there with the best.

Then there’s all the narrative stuff. Some may find the characters and settings twee and the jokey script a little wearing, but there’s a real charm to Bravely Second’s heroes. Whether they’re discussing Yew’s diary, a fictionalisation of his story which attempts to make him sound more capable than he actually is, or swapping oddball variations on French phrases, they’re a lovable bunch. 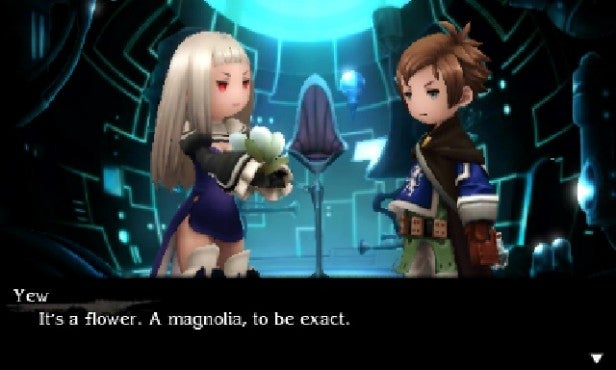 In the demon-hunting moon dweller, Magnolia – a self-described Ba’al Buster – and the pugnacious but secretly sweet Edea, Yew has some formidable back-up. In its vain duellists, oafish, boasting warriors and creepy sorceresses, Yew also faces some tremendous foes. Even when you’re just wandering around the cities you’ll find characters and situations that make you chuckle. The whole thing has been translated and then performed by people determined to spin a great yarn.

And while nobody could claim that Bravely Second hits Bioware levels of depth, it still takes time to build relationships and romances, while adding some moral choice in the numerous side stories. These give you a situation then demand you pick a side, knowing that the choice you make will affect which asterisks you win and which jobs you can then take on. Do you want to be a thief or a red mage? Does that mean fighting on the wrong side?

In the end, it’s a combination of these obvious charms and hidden depths that keep you coming back for hour after hour. What I like most about Bravely Second is this: it isn’t trying to reinvent the JRPG or even revisit what made the old ones great, it’s just trying to be the best, most entertaining JRPG it can be. If so, it’s succeeded admirably. It’s not just a fantastic JRPG but one of the best games on the 3DS.

A spellbinding, effortlessly charming JRPG that freaks with the formula while respecting what makes the genre great. While some might find Bravely Second two twee or jokey to be taken seriously, others will find a smart, witty and surprisingly rich adventure, mixing old-school style with brilliant 3D graphics and a knowing, humorous tone. We’d warmly recommend it.