The LE02 is a lovely sounding speaker, with a big, smooth and balanced sound. It’s a speaker built for the music streaming age, and with its elegant appearance and wireless convenience, Braun Audio’s return to the hi-fi stage – at least as far as the LE02 is concerned – is a successful one

Braun Audio is back after nearly 30 years with the premium LE02 wireless speaker.

The first thing that comes to mind when you think of the Braun name is its cosmetic grooming range (Oral-B, Gillete, etc). In another lifetime Braun was regarded for its hi-fi products, but that association ended when it parted ways with its hi-fi division in the early nineties.

28 years later and Braun Audio has resurfaced. After a soft re-launch at IFA 2019, the brand has launched the LE wireless range of speakers ahead of its centenary celebrations. If the LE02’s performance is any indication as to the quality we can expect from the rest of the LE series, there’s plenty to be confident about Braun Audio’s resurrection.

The LE02 sits in the middle of the LE range between the compact LE03 and similar-looking, but much bigger LE01. Its look – like the rest of the range – is one of minimalism and elegance. It’s rather understated compared to the Naim Mu-so Qb2 and B&W Formation Wedge: more tasteful in its appearance than those more adventurous looking speakers. 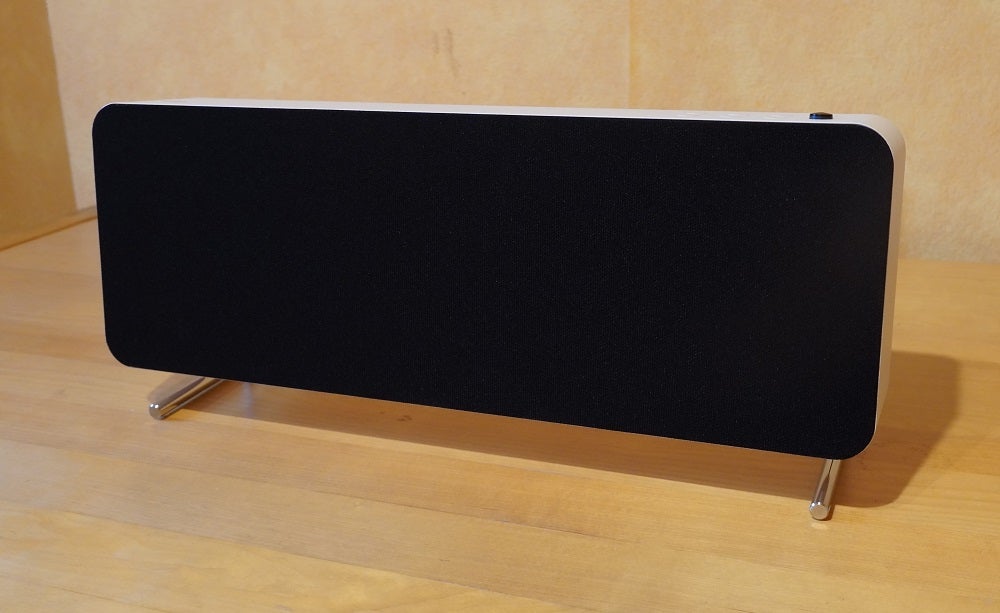 There are a few different combinations in terms of placement: an optional floor stand (£219), silicone feet or most likely the (classy looking) custom stainless steel stand. Assembly is exceedingly simple; slot the support in until a click is heard.

The stand adds a bit of clearance as well as angling the speaker up towards the listener. When viewed head-on the LE02’s acoustically treated speaker cloth covers the entirety of the grille, which is deftly outlined by the white aluminium housing that contains the speaker’s vital organs. Available in black or white (the acoustic cloth remains black whichever colour is chosen), the latter is the more eye-catching of the two. The choice will likely come down to a) your taste and b) your décor. 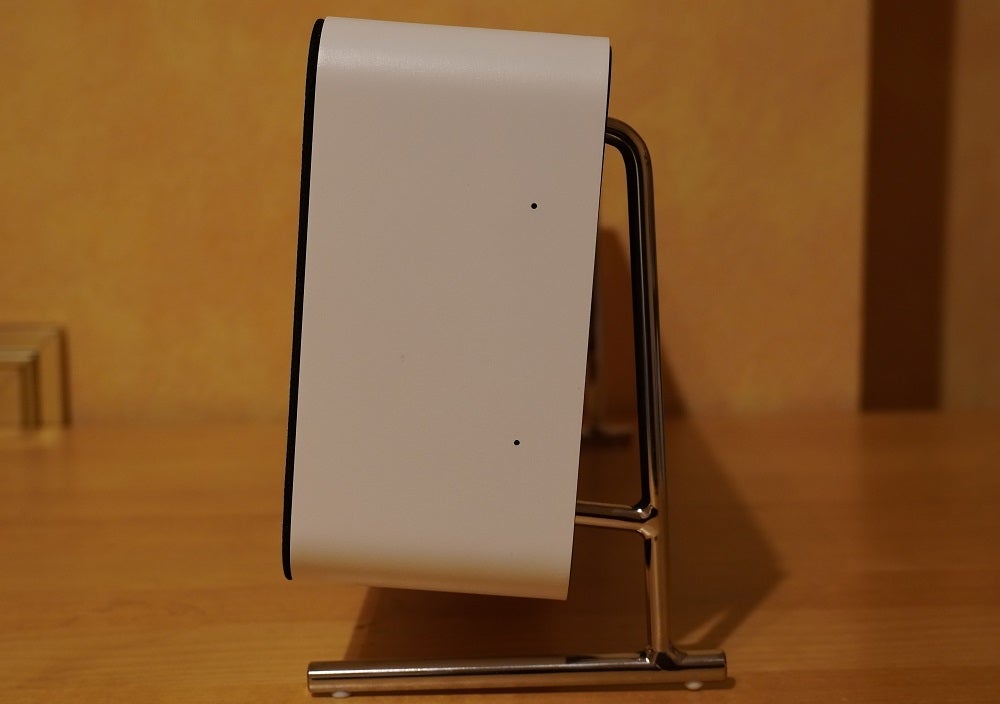 On the top panel you’ll find the Braun logo and physical buttons for Bluetooth pairing, playback, Google Assistant and a ‘privacy’ button for switching the microphone on and off, lest Google Assistant eavesdrop on your conversations.

Sitting beneath the buttons is the front panel display, if you can call four status lights a ‘display’. They cover everything from indicating when a software update is in process (yellow light), to volume changes and notification of when Google Assistant is deactivated (four orange lights) and more besides.

The LE range aims to take advantage of the convenience music streaming services offer, and their features reflect such a modern outlook.

In terms of physical connections there are few: a sole aux 3.5mm input for hooking up an external device and an Ethernet port for hardwired connection to the Internet if the Wi-Fi is proving shaky. 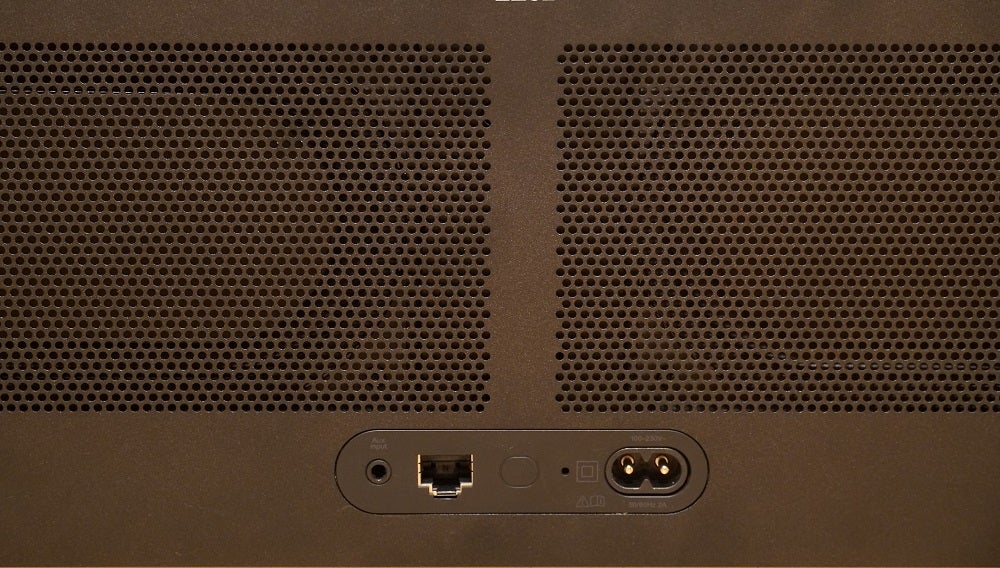 More likely to be used is the Bluetooth 4.2 connection (AAC), or if you’re ensconced in the world of Apple, AirPlay 2. Chromecast is supported, and that takes this speaker’s capabilities to 24-bit/96kHz for playback of high-resolution audio.

Built-in Google assistance also means multi-room through the Google Home app (you can do the same with AirPlay 2). Should you have coffers big enough for another LE02, a stereo pair can be formed in portrait (if you purchase the optional stand) and landscape orientations to create left and right channels. 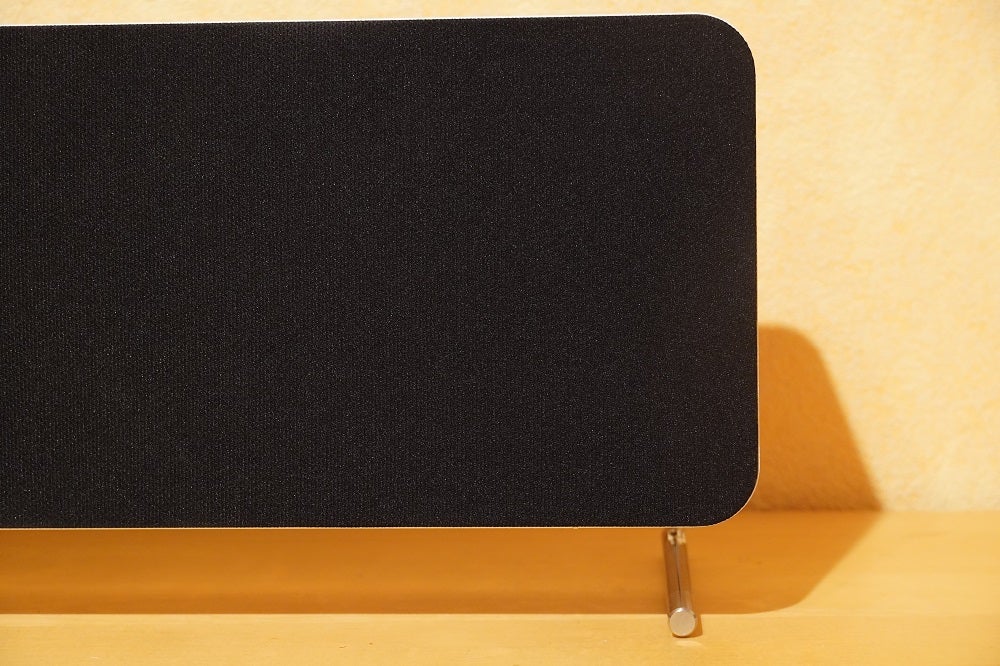 Inside the LE02’s aluminium enclosure is a five driver array that consists of a 5.5-inch woofer, two full-range 2.25-inch BMR (Balanced Mode Radiator) units and two 6-inch x 3.5-inch bass radiators. Braun has touted its BMR speakers as being rather interesting, delivering a non-directional but panoramic performance. In layman’s terms that should make for a sound that’s more even, regardless of where you sit or stand. There’s no mention of power output, but the brawn (so to speak) is delivered by two monolithic HD Class-D amplifiers, while a 32-bit ARM multi-core digital signal processor acts as the brains.

The built-in microphone features far-field recognition of voices, as well as acoustic echo cancellation to clear out any sounds that could obscure them. With regards to the microphone’s performance, it’s good for reliably picking up a voice from about three or four metres distance. Further back and it was rather silent to my beck and call. 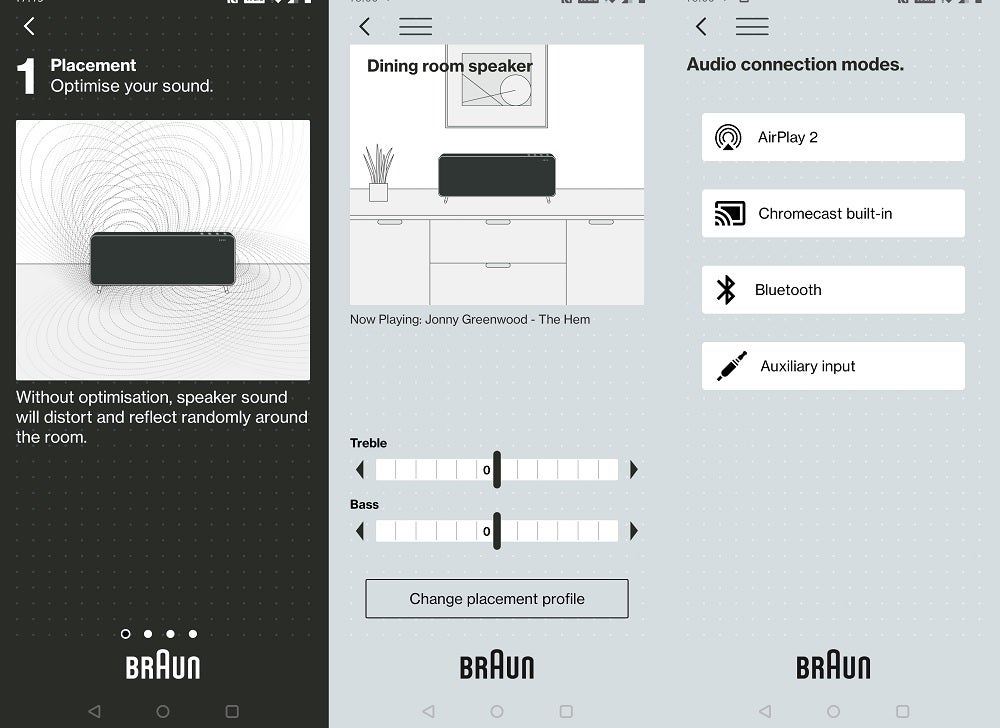 Audio file support covers a fair amount – HE-AAC, LC-AAC, MP3, Vorbis, WAV (LPCM), FLAC and Opus. There’s also an app (Android/iOS), that’s easy to use but slim on features. You can set up room optimisation (next to wall, freestanding, etc), tweak bass and treble (which does have an effect), as well as choose which connection to enable and that’s about it. That’s arguably all you’ll need considering you’ll be spending most of your time in the music apps themselves.

So while 30 years have passed since Braun was a name in the audio world, its time on the side-lines hasn’t resulted in any rust where the LE02 is concerned.

Starting with Nicholas Britell’s If Beale Street Could Talk (Qobuz) and the LE02 announces itself with a confident sense of size and scale. The soundstage is wide, giving music plenty of room to play in. Though the LE02 doesn’t project the sound into the room with any force, it can fill a medium-sized one with ease. Dynamically it puts in a good shift with a perceptible difference between quiet and calm, loud and powerful. 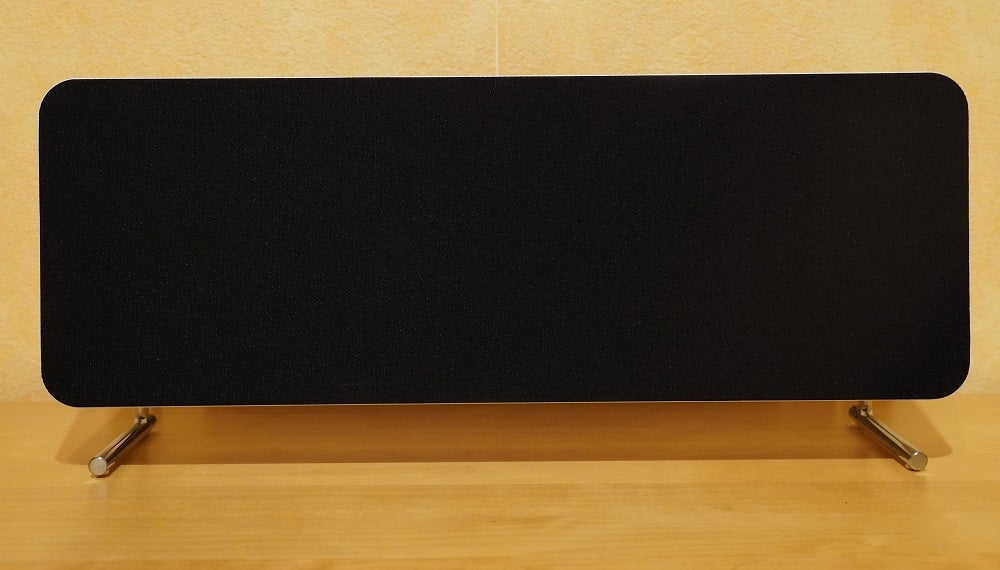 With the speaker placed against a wall, bass is tight and controlled with a high-res version of Ludwig Göransson’s Rainy Night in Tallinn from the Tenet soundtrack beamed over Chromecast. Another track from that album – 747 – and the LE02 supplies ample amount of power and muscle. There’s certainly a degree of versatility to its sound, happy dealing with different various genres whether it’s jazz, rock ‘n’ roll or classic and Motown tunes from the 70s.

Given the right track (and resolution) and the top end is well defined with a sharp and piercing tone to treble notes The decay of piano notes in Jun Jae-il’s score for Parasite (Qobuz) adds a little bit of shine to high frequency notes.

There is a slightly loose character to its sound though, as it lacks a little in terms of assertiveness and attack. While it sounds clichéd, the Braun LE02 serves up an easy listen experience, offering a tonally smooth, spacious and balanced presentation.

That said, when given a track like The Rat by The Walkmen, the LE02 steps up to the plate to produce a sound that’s full of drive and momentum. Rhythmically, it has an enjoyable sense of flow, with a midrange that’s given plenty of space to operate and detail to eat up.

Listening to the Whiplash (Qobuz) and the LE02 is nothing less than enjoyable in terms of its dynamism and timing. Each note hits as and when it should, with the Braun unflustered by tricky changes in pace. Drum hits are clearly defined for a punchiness to the sound, while brass horns blare with clarity in the album’s standout rendition of Caravan. At lower volumes it loses some energy but still maintains attention with the detail and clarity of its performance. 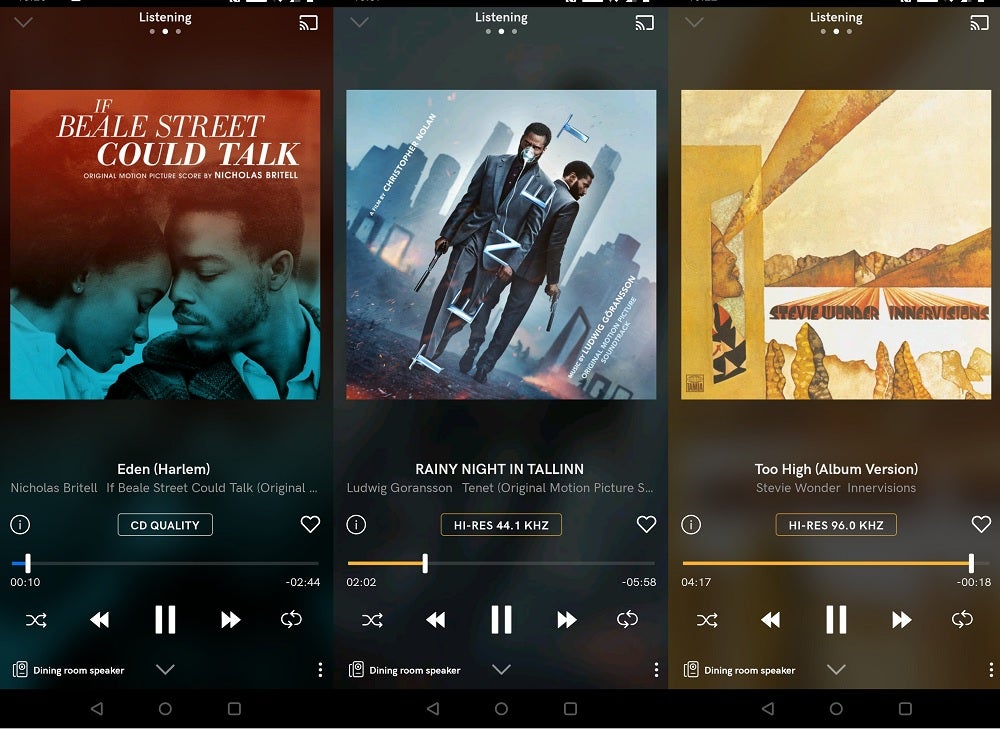 It’s not a speaker you’d want to to turn up too loud though. Push it and it comes across as strained. While vocals are handled well – there’s plenty of room and clarity awarded to performers in the centre of the LE02’s soundfield – the overall soundstage does feel a little flat, as if voices and instruments all exist on the same plane. Perhaps that’s where the Balanced Mode Radiators’ lack of directionality becomes an issue, as you do wish voices were brought out a little further to sit on top.

These, though, are a few foibles in the Braun LE02’s impressive and musical performance. If the other speakers in the LE range are anything like the performance of the LE02, then we can’t wait to hear what else Braun Audio has to offer. 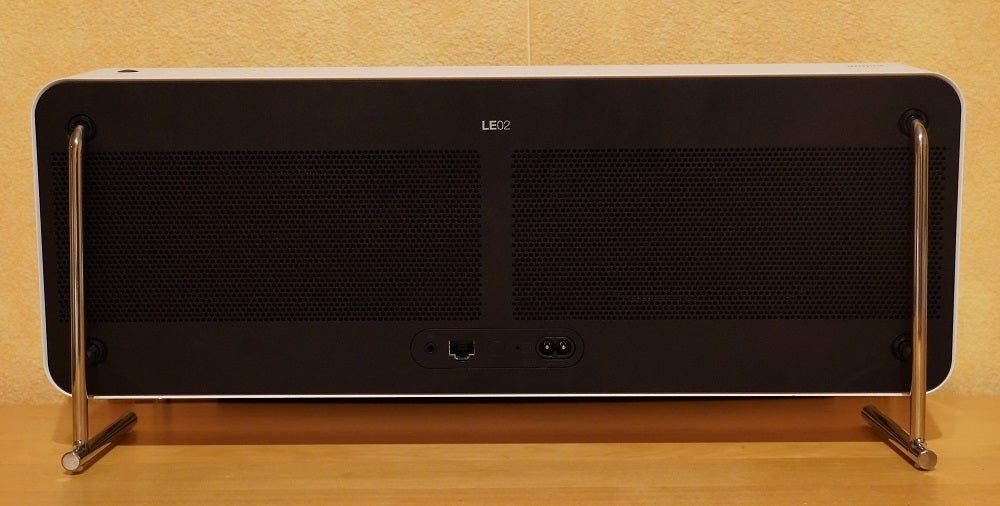 Should you buy the Braun LE02?

On the basis of the LE02’s performance, Braun’s comeback is showing signs of being a very good thing indeed. It’s a speaker best made to take advantage of the rise in high-quality streaming services such as Tidal and Qobuz and serves up a thoroughly enjoyable performance

Other candidates in the premium speaker sphere include the Naim Mu-So Qb2 (our wireless speaker of 2020). It costs the same and has a similar spec, but looks a bit more distinctive; is more compact and also features Roon-ready support.

Another is the Bowers & Wilkins Formation Wedge. Odd looks aside it delivers a fabulously lush and music presentation; pretty much matches the Braun in terms of spec (though it too is Roon-ready), but costs £150 more (though it can be found for £799 if you look around).