What are the Bragi The Headphone?

Firstly, yes, they are called ‘The Headphone’. With that out of the way, Bragi’s The Headphone are the company’s second truly wireless earbuds. But unlike The Dash, these do away with all the advanced sensors and tracking elements in favour of a pure audio experience.

What’s left then is a pair of truly wireless headphones that play music and act as a hands-free headset – and a less expensive alternative to the Apple AirPods. However, they’re not perfect. While sound quality is good, the lack of a charging case and other convenient features might aggrieve some potential buyers.

Bragi The Headphone – Design and controls

The design of Bragi’s second truly wireless earphones doesn’t deviate much from the template set with The Dash. The casing is a glossy black, and you get three different-sized tips included. Two are silicone, while the largest set comes in the form of compressible Comply foam tips. The latter were my preference, since they provide the most passive isolation. 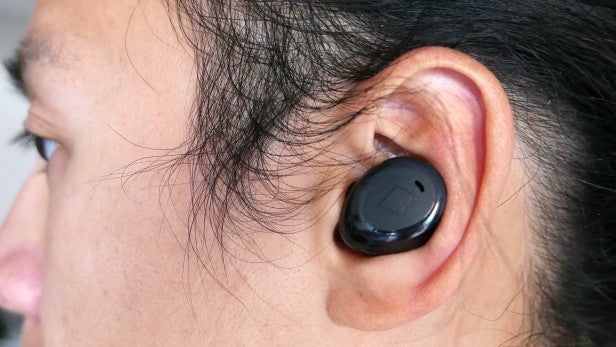 Once inserted into your ears, the headphones don’t protrude very much. I never had any problems with the earphones falling out of my ears – but, without any wingtips to properly lock them in place, I did occasionally find them rotating in my ear canal so that the external casing wasn’t resting properly. Otherwise, these are pretty comfortable earphones.

On the outside of the right earphone you’ll find three discreet buttons. One can be used to turn on the headphones with a long press, as well as providing play/pause functionality, track skipping, and as a shortcut to your digital assistant of choice. 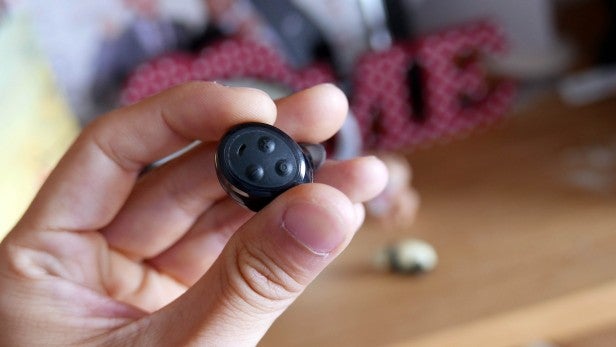 The other two buttons are used for volume adjustment, as well as turning on and off the Audio Transparency mode, which lets you hear some of the outside world. Annoyingly, the buttons are stiff and difficult to press, so I found myself pushing the earphones into my ear canal whenever I wanted to use them.

I would also have preferred the track skipping to be a long hold button press, rather than a double- or triple-press; more often than not, I kept performing this incorrectly as a result of the specific timing required and the difficulty in engaging the controls. Swapping this with the less-often-used Audio Transparency mode that requires a button hold would have made more sense. 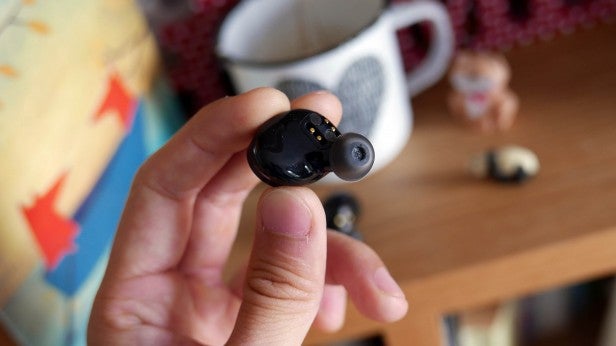 The Audio Transparency mode uses The Headphone’s microphones to let you hear the outside world without removing the earphones. This will be useful if you need a level of situational awareness, or just don’t want to be taking your earphones out of your ears to have a quick conversation.

I found it was one of the better applications of using microphones to hear your environment that I’ve tried, performing better than the Jabra Elite Sport.

Another neat trick comes in the microphones department. There’s one microphone on the outside of the earbud, as is common, and another microphone actually inserted into your ear canal. The microphone picks up your voice from inside your head and the headphones will dynamically cancel the external noise so your caller can hear you clearly. The hands-free aspect worked really well in that regard.

The Bluetooth connectivity to my smartphone proved stable throughout testing. The right earbud pairs wirelessly with the left, and the latter will cut out if not within vicinity. Put the left earbud back in your ear, and the connection resumes almost instantaneously. The music doesn’t pause, however.

When not in use, the headphones stow away in a case – which, notably, doesn’t charge the headphones through an extra power bank in the way of the Apple AirPods, Jabra Elite Sport or Sol Republic Amps Air. All of these truly wireless earphones can be topped up through their cases. 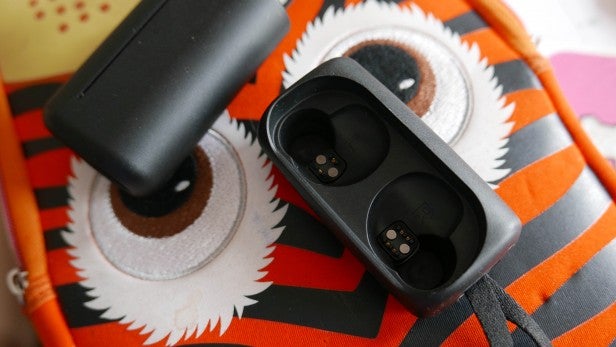 Bragi says that this was a conscious decision to keep the cost of The Headphone low, and also because The Headphone will run for six hours on a single charge, which should be good for a day’s worth of listening.

In principle, that sounds fine. Six hours duration is respectable, beating the Apple AirPods by an hour. In reality, however, I found I was getting closer to five rather than six hours of playback at my usual listening volume.

Then there’s the fact that while the case doesn’t contain its own power bank, it’s still needlessly big. Considering you’ll probably want to keep it with you so that you don’t lose the headphones, it’s puzzling that it wasn’t made smaller. I often had to throw the case into a bag because it was too bulky for my pockets. 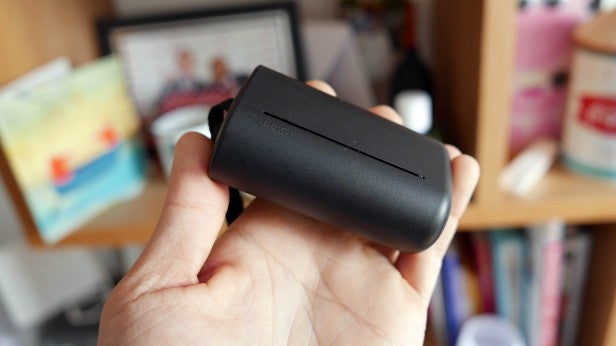 It’s really easy to forget to turn the earphones off when putting them away. I’d only realise when I noticed a Bluetooth connection was still active on my phone. This is a sure-fire way to run down the battery accidentally, especially if you don’t at least pause your music before putting them away. The headphones will at least turn off automatically after a while if no music is playing.

Having tested other wireless pairs that turn off automatically, I had to train myself to remember to power off the headphones before putting them away. 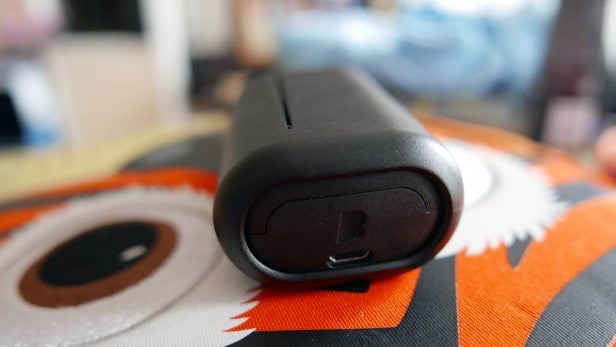 While there’s no battery inside the case, you’ll still need to use it to charge the headphones, which is done by connecting a Micro USB cable.

I found it a chore to have to immediately charge the headphones on returning home. I’m pretty much always listening to music during my commute, and also often during working hours, so just over five hours of battery life means that this was necessary if I wanted to use the headphones the following day.

For headphones that cost less than the Apple AirPods, you’re getting a whole lot more for your money in terms of sound quality. For starters, there’s actually some bass presence here.

Perhaps not as tight and controlled as I’d have liked – the bass can spill over into the mids somewhat, making for a slightly warm sound – but certainly better than the flabby bass from the AirPods. As always, you’ll need to ensure a proper seal by using the correct tips.

The treble isn’t the most detailed you’ll hear, but it’s still decently separated from the mids, enough so that jazz tracks don’t sound like a garbled mess. While these aren’t headphones that will likely hold up to critical listening, I found them more than capable across genres for everyday listening without causing any fatigue.

Should I buy the Bragi The Headphone? 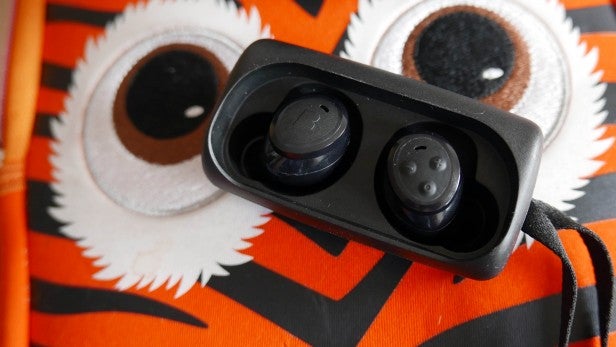 I wish I could look past some of The Headphone’s shortcomings. For the money, there’s a lot to like in terms of their form factor and sound quality. I could even have accepted the lack of a charging case, if the case had been smaller.

But the large case, compounded by other little grievances – such as their inability to turn on and off automatically – make The Headphone more difficult to recommend overall.

The Sol Republics Amps Air are available for the same price. While continuous battery life of three hours is a little lacklustre, this is alleviated by a charging case – which somewhat goes against Bragi’s claim of not including a battery to keep costs down.

Decent-sounding truly wireless earphones, but the super-sized case and other shortcomings get in the way of a recommendation.