What is the Bragi Dash?

Most wearables are worn on the wrist, but not so with the Bragi Dash. Touted as the world’s first hearable – it looks like a pair of wireless headphones – the Dash promises to track your activity just like a Fitbit or Jawbone.

Of course, it works as a pair of headphones too, streaming music wirelessly from your phone via Bluetooth. And if you’re not keen on carrying your phone with you while you work out, then the Dash offers 4GB of onboard storage – simply load it up with playlists and get moving.

The device is also capable of providing audio feedback on your performance, with a slightly robotic female voice reading out your stats as you go. But should it be your next workout buddy? Let’s find out.

First impressions are very good. The headphones come in a lush fold-out box; the kind of “everything fits” package that you’d expect from Apple rather than a start-up launching its second device. 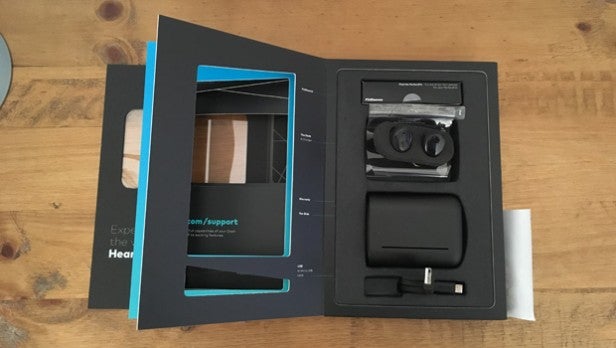 Considering they’re capable of fitness tracking, storing thousands of songs, and offer Bluetooth functionality, the Dash earbuds aren’t particularly bulky. They’re only a little bigger than a standard earbud, and don’t feature the unsightly “stalk” that make Apple’s AirPods look rather divisive in the looks department.

They’re smaller than the Sony Smart B-Trainer, but the Dash offers one advantage – they’re truly wireless; the Sony pair have a cable connecting the headphones to each other. The Jabra Elite Sport are a more comparable truly wireless pair, and of a similar size. 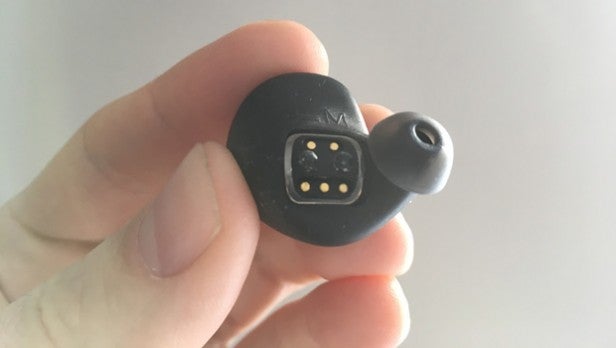 That means all communication between the headphones is wireless. As we’ll see, this is both the Dash’s biggest asset and its biggest weakness.

They’re comfortable to wear, thanks to the three sets of “fit sleeves” of various sizes that come bundled with the hearables. These fit over the earpiece, for a snug fit into your ear cavity. Once in, they act as noise-isolating headphones, minimising background noise. You can also switch on the noise cancellation to further block out unwanted sounds.

To control them, you tap or swipe the headphones; the left one controls the fitness tracking, while the right handles music playback. Press and hold the left one to enter the activity menu, then tap to select an activity. Then it’s a case of tapping to start said activity. With no screen to see, it can be a little confusing at first, but you’ll soon get the hang of it. 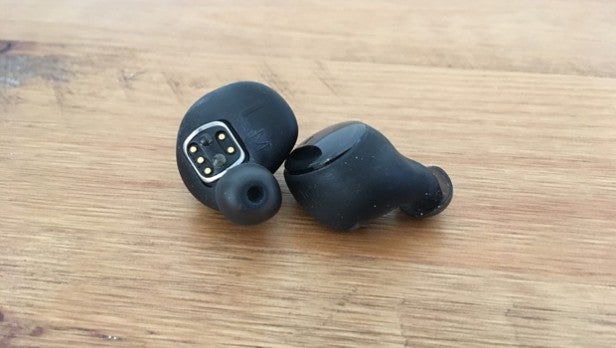 The earbuds make trilling noises to let you know your presses have registered.

It’s a bold approach to a UI, with no physical buttons or screen. Sadly, however, the technology isn’t quite there yet. Too often my presses didn’t register, and I was left repeatedly tapping the earpieces.

Worse still, halfway through my testing, the right earpiece decided to stop playing music altogether. It didn’t fail completely – I could still adjust the volume of the audio feedback by swiping forward and back on it – but it wouldn’t register a single tap. Disappointing.

The good news is that you don’t have to take your phone with you while you work out. Start an activity – running, swimming or cycling – and the Dash will monitor your performance.

Every five minutes – or whenever you double-tap the left earpiece – it will provide an update on how you’re doing. This comprises simple stats, such as how long you’ve been going, steps taken, heart rate, distance, calories burned, cadence and speed (for cycling), and number of lengths (for swimming).

It’s a great way of staying informed about your progress, but it isn’t without its problems. 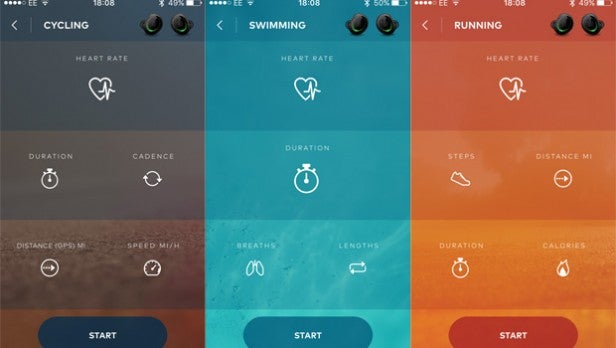 The device doesn’t store your workouts, so the minute you finish, the data is gone forever. This is quite an oversight. The only way to store the workout data is to sync the Dash to your phone beforehand, but that means taking your phone with you, which misses the point.

You could sync and then leave your phone at home, but this too presented issues. A couple of times when I went running, the Dash wouldn’t connect back to the app to transfer my data.

Even if it does so straight away, because it thinks your workout went on until you pressed stop – if you have to get out of a swimming pool, shower, and return to your locker before “ending” your workout – this will add minutes to your time. 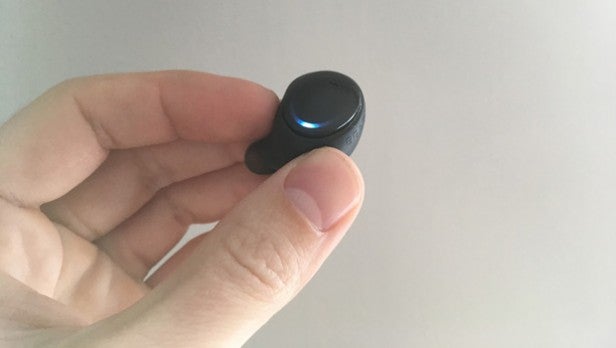 As a note, make sure you get the right size of fit sleeve when swimming. I didn’t the first time, and ended up having to retrieve the earbuds from the pool floor.

The data is pretty accurate, though. When swimming, it was occasionally a length or two out, but we had the same degree of error with the Apple Watch Series 2, TomTom Spark 3 and the Speedo Shine 2. And it’s great getting that audio feedback, instead of stopping and checking the screen. 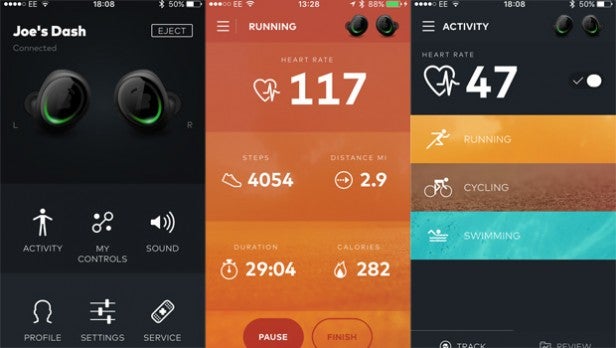 I’m less keen on wearing the Dash while cycling, however. I like to be aware of my surroundings when on a bike, but the Dash blocked up my ears so, even without music playing, I felt less safe on the mean roads of London.

The app is fine, although a little underwhelming; the tutorial videos don’t have sound, for instance. But apart from syncing your workouts – which, as I’ve mentioned, isn’t a painless process – you shouldn’t have to use the app much.

The Bluetooth connection isn’t rock-solid, either. It often dropped out, especially while I was out and about. This is annoying for a product that sells itself on its wireless connectivity.

You charge the dash in a neat little case that plugs into your computer or a USB-compatible plug. The case itself charges up too, so you can use it to juice up the Dash when you’re away from a power source.

The earphones slot into place using magnets. You know when they’re in because they’ll flash blue before pulsing as they charge. The colour of the light will depend on how much battery life remains: red is low; green for high; and blue indicates it’s full. They pulse in sync with each other too, which is quite a cool effect. 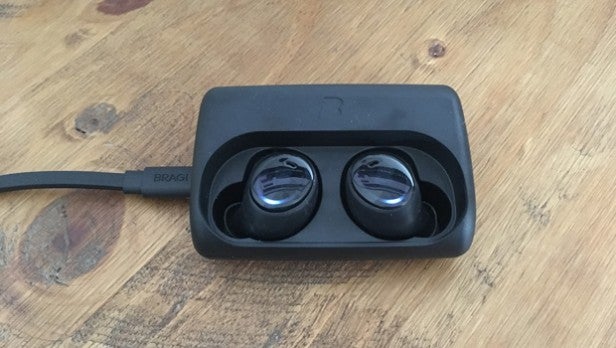 You’ll get around three hours of use from the Dash before it needs a charge. That’s more than enough for workouts, but if you’re listening to music on the go too then you might need to take the charging case with you. The case will also help stop you losing your earbuds.

Should I buy the Bragi Dash?

I’d love to recommend the Dash – but, unfortunately, the device isn’t as polished as it should be. Sound quality is good, and the fitness tracking is impressive; when it all works it’s a real glimpse of what will be possible. But there are too many niggles that require sorting for us to part with £250.

Right now, Jabra’s Elite Sport are a more complete package if you’re not an avid swimmer and would get our recommendation for a fraction less money.

We’ve no doubt hearables will soon be a big product category. It’s just a shame the Bragi Dash can’t capitalise on its potential.