What is the BQ Aquaris M10 Ubuntu Edition?

If I were to walk into a pub and ask a random person what they thought of Ubuntu, I’d probably be greeted by a blank expression. This is a little sad, since the OS is actually one of the most interesting around.

Ubuntu is the brainchild of Canonical, a company that in my and many developers’ minds is the Justice League of software development houses. It’s been working for years to develop open source, privacy-protecting software that any person can use for free.

The firm has had great success in back-end technology areas such as data centres, and is the most widely used desktop distribution of Linux around – which, believe it or not, puts its user numbers in the hundreds of millions. Full disclosure: I’m one of these users.

Which is why I couldn’t help but get excited about the Aquaris M10 Ubuntu Edition. The tablet is Canonical’s latest attempt to bring its open source software to the mobile masses, and on paper it offers some pretty amazing features. Chief among these is the ability to switch from a tablet into a fully functioning Ubuntu desktop.

However, be warned: quirks in the software combined with more than a handful of bugs mean that the tablet is unlikely to be suitable for anyone other than avid tinkerers and prosumers.

Editor’s note: We’re not scoring the BQ Aquaris M10 Ubuntu Edition since it’s not really a consumer device and is very much a work-in-progress.

Ubuntu is the most used desktop Linux distribution for a reason. It’s one of the simplest to get your head around and is actually pretty darned close to achieving the Holy Grail of software development: a ubiquitous OS.

For non-tech folk, a ubiquitous OS has been the end goal of numerous technology companies. The idea is to create an all-in-one operating system that can run across all device categories using a single, core, common code. Sound familiar? It should. Microsoft made a big song and dance about achieving this on its latest Windows 10 operating system.

This may not sound like a big deal, or something any general consumer should care about, but it’s actually a huge step for technology as a whole.

An all-in-one OS will make it quicker and easier for developers to bring their products to market across multiple categories, which will lead to faster development cycles and a greater number of apps from which to choose. This is because developers would no longer have to  rewrite the core code of their apps when they want to launch on a new platform.

It also makes it easier for companies to plug security vulnerabilities across multiple device types – which, in this ever-evolving world where cybercrime is an increasing problem, is no bad thing. 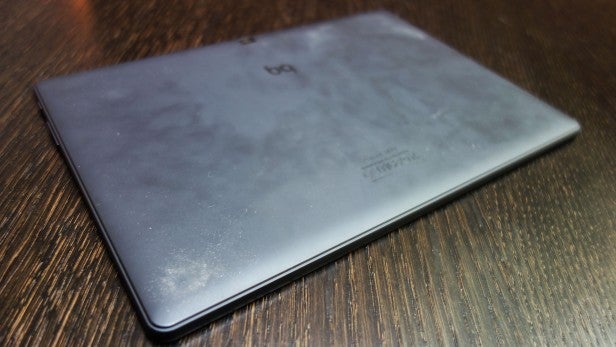 Ubiquitous software will also play a big part in the future as part of a trend known as the Internet of Things (IoT). IoT refers to a future where everything from phones and tablets to fridges and traffic lights are connected to the internet and talking to each other. The idea is that with this ability to communicate, devices will be able to intelligently meet their users’ needs.

For example, a smart fridge may be able to detect when you’re running low on milk and ping a message reminding you to pick more up on your way home from work. Ubiquitous software helps make this happen as, by running the same core software, machines will all speak the same language and be able to communicate better.

The BQ Aquaris M10 Ubuntu Edition’s software is the latest step in Canonical’s bid to make this future a reality.

Out of the box, the BQ Aquaris M10 comes running version 15.04 of the software, not the latest 16 – something seasoned Ubuntu users will find disappointing. But there’s a good, albeit confusing, reason for this. The software running on the tablet is actually using tech that’s ahead of Ubuntu’s latest 16.04 LTS desktop version. Specifically, the software is based on the newer, but still-in-testing, Unity 8 framework.

Unity 8 is a graphical shell that forms the basis of the OS and is being tested as a means to create a fully ubiquitous version of Ubuntu. The current version of Ubuntu desktop runs the older Unity 7. This, in essence, means the tablet OS is in some ways a preview of what Ubuntu will look like in the future. It’s also a key reason for the tablet’s most interesting feature – a dock-free version of Microsoft’s Continuum. 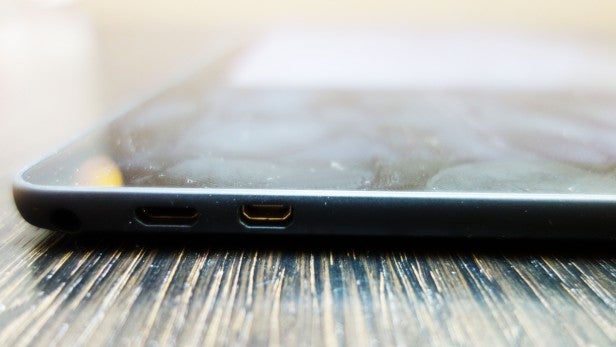 Continuum is a cool feature that Microsoft launched on Windows 10 Mobile in 2015. In theory, it lets you turn any mobile running Windows 10 into a desktop computer using a specialist Microsoft Display Dock. However, with the dock costing £70 and the feature granting you access to only select applications, close to all of which are Microsoft’s own, its current appeal has been limited.

By comparison, thanks to its Ubuntu software, the BQ Aquaris turns into a functioning computer and runs desktop Linux applications the moment you connect it to a monitor using the bundled micro-HDMI to HDMI cable.

The feature works a treat and, with a Bluetooth keyboard and mouse attached, meant I was able to write this review, edit its photos and load it into TrustedReviews’ CMS using the BQ Aquaris.

The software’s Scopes-focused user interface also has the potential to radically change the way we interact with tablets, and is tailor-made to take advantage of the the future world of IoT. Scopes are intelligent homescreens that collect and push information from a variety of apps in a similar way to Google’s Now service.

For example, the “Nearby” scope will result in the phone pulling data from apps such as Maps, Yelp, Time Out and Facebook to display relevant information, such as local public transport links and restaurants, into its UI. This means that, in theory, you can access information from all the applications installed on an Ubuntu tablet without having to open them individually. 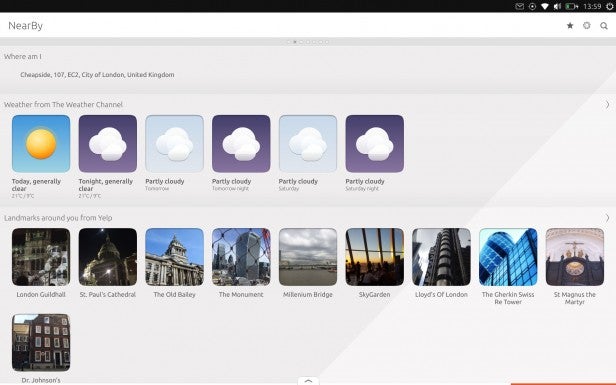 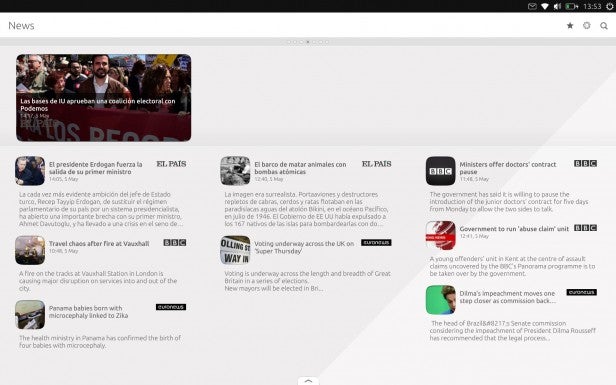 When the Scopes feature works, it feels like something out of the future. The Nearby scope was is a particular highlight. After a solid week with the tablet, I found it could offer excellent updates on a variety of things, including upcoming calendar alerts, local weather forecasts and updates on the status of nearby and often-used public transport services. On more than one occasion I used the scope to avoid London downpours and time my exit from the office to catch my bus home without having to wait.

Out of the box the tablet’s Scope offering is limited, including only basic pages for things such as news, music and video. But, you can download new Scopes from the Ubuntu store to expand the type of information appearing on the tablet’s homescreen. If you’re particularly clever you can also create new Scopes using Ubuntu’s software development kit – the tool developers need to use when creating applications for the OS.

Scopes runs as a fullscreen app when the tablet is undocked, and runs in a window when desktop mode is enabled. It would have been nice for Scopes to be a slightly more seamless integration, with perhaps a side-bar or a pull-up menu instead of needing its own screen or window.

It’s also worth noting that the tablet’s screen turns into a touchpad when you plug it into a monitor, which is a novel touch, although it would have been nice if the tablet could also act as a secondary monitor as well.

The kit is pretty robust, and thanks to Ubuntu’s strong following in the open source community, there are plenty of useful guides and documentation available that make it one of the easiest Linux distributions to develop for. As an added bonus, Canonical has included support for every coding language out there – which, again, makes this a great tablet for tinkerers and coders.

I’m hoping this will lead to an influx of new, more advanced Scopes in the near future. Further ahead I can also see Scopes benefiting from Canonical’s IoT investments, which will likely help them pull data from a greater number of sources and offer even more intelligent recommendations.

… but regular folk shouldn’t buy it

All this sounds great, and if you’re an avid tinkerer like me then it is. But I still wouldn’t recommend that any general consumer touch the Ubuntu tablet. The OS is still in development and suffers from a number of bugs.

For starters, the tablet’s performance is finicky. I’m not sure if it’s due to software bugs, or the low-end MediaTek MT8163A processor and 2GB of RAM at the heart of the Aquaris M10. Either way, performance is stuttery in use and will on occasion crash. 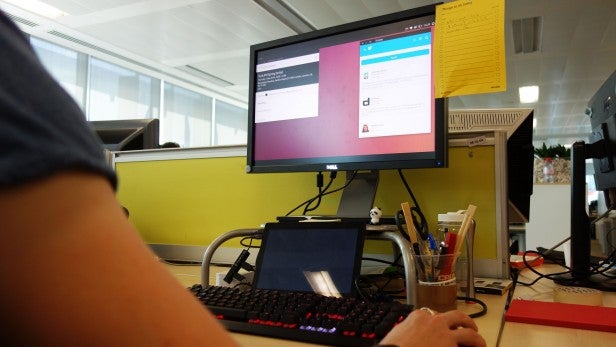 This is particularly evident when the tablet is tasked with demanding processes, such as large-scale photo editing in GIMP – although given its average 10.1-inch, 800 x 1,280 resolution display, I wouldn’t recommend doing this unless it’s connected to an external monitor anyway.

The software also has a few interesting quirks that will stump even the most tech-savvy of users. For example, the native Ubuntu browser doesn’t support the necessary software to  handle even basic things, such as play videos on Netflix. A Canonical spokesman confirmed the company is working to add the functionality in the near future, but couldn’t say exactly when this would happen.

This is a problem, since the Ubuntu store’s application is a little lacking compared to that of iOS and Android. All the usual freeware is present, plus some useful third-party services including SoundCloud, 7digital and Songkick, Yelp, Fitbit, Twitter and Facebook. But big-name services – including, Spotify, Tesco and BBC iPlayer – are absent. 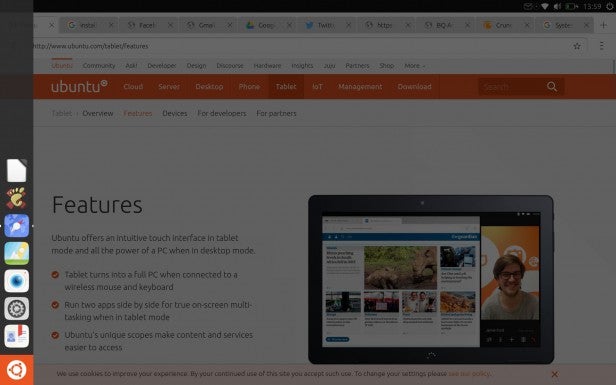 I’d hoped to partly get round the application shortage by creating shortcut icons to the services’ web apps in the Unity launcher (a pull-out side bar that offers shortcuts to applications), as you can on Ubuntu desktop. But, yet again, the functionality isn’t currently active in the Ubuntu tablet software.

As final confirmation of this tablet’s lack of consumer appeal, I also noticed that a number of applications haven’t been properly optimised for a touchscreen. For example, the secondary Firefox web browser is the desktop version, and won’t pull the on-screen keyboard when you launch it. Gedit, the text editor, also doesn’t fire up its onscreen keyboard, which is irritating. 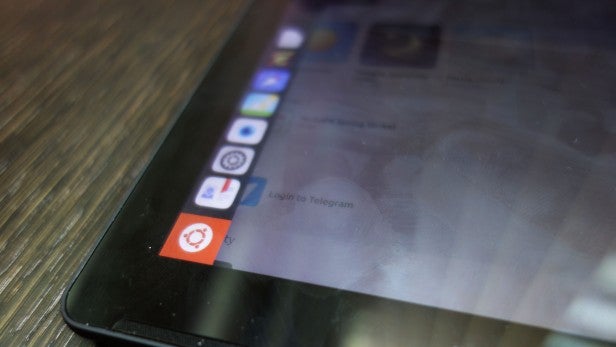 The above may make it sound like it’s all doom and gloom for the Aquaris M10 Ubuntu Edition, but this isn’t the case. Sure, the tablet isn’t ready for consumers, but that’s because it’s a work-in-progress. In the world of open source, early releases are often buggy and finicky. In fact, even the early versions of Android, which had Google bucks behind it, were pretty terrible.

The Aquaris M10 Ubuntu Edition is a step in a wider journey for the OS, and open source software as a whole. It may not be ready for consumers right now, but thanks to sensible decisions by Canonical regarding its back-end software and place in a wider software ecosystem, the Aquaris M10 radiates potential.

As a result, while I wouldn’t recommend it as a purchase for regular consumers, I’d wholeheartedly urge open source developers and avid tinkerers to buy it, report any bugs they find and, if they’re feeling particularly generous, throw a fix or two onto GitHub.