What are the Bowers & Wilkins P7 Wireless?

Some would say Bowers & Wilkins was a little slow to adopt Bluetooth technology. It only recently dipped its toes in the waters with the T7 Bluetooth speaker, which was soon followed by the P5 Wireless headphones, both of which proved very capable.

Next up are the P7 Wireless headphones, taking the company’s famed P7 model and cutting the cord. These larger, over-ear headphones cost the same as the on-ear P5 Wireless did at launch, with the latter now having been reduced in price accordingly.

If you’ve seen the P7 in the past, or even the P5 in its wired and wireless guises, you’ll know what to expect when it comes to the P7 Wireless. There’s luxurious sheep leather in abundance, paired with aluminium. They make for an altogether premium-feeling package.

As the P7 Wireless are over-ear models, they’re quite a bit bigger than the P5 Wireless. To counter this, the P7 Wireless collapse down to a smaller, more easily transportable size.

Bowers & Wilkins has said the memory foam used in the earpads is different to that of the original P7’s. These are designed to reduce resonance, leading to less distortion. 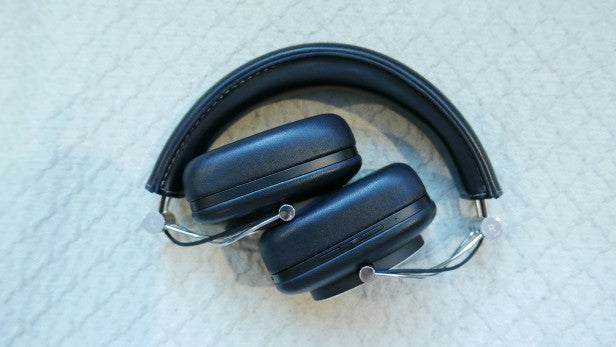 Between the memory foam and the headband, the P7 Wireless are reasonably comfortable to wear. There’s a tautness to the fit of the headband, but if it’s anything like the P5 it should loosen up slightly over prolonged use. I found the on-ear P5 Wireless would, to begin with, slightly bruise my ears if I wore them for a long time, but that the problem lessened as they wore in.

The advantage of the slightly tight fit and the closed-back, over-ear design is that there’s a respectable amount of passive isolation, as the generous padding helps to block out the outside world. The earcups slide up and down an aluminium rail, so you can find a comfortable fit. 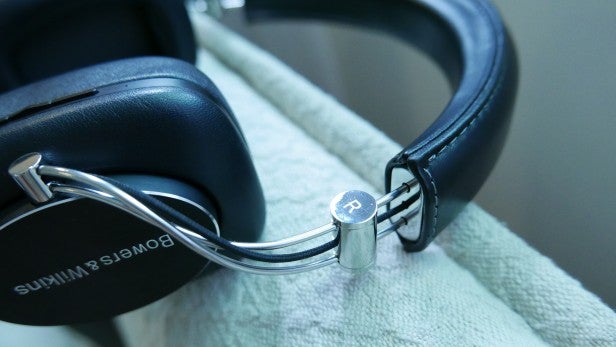 The outside of each cup has Bowers & Wilkins branding against a brushed metal back. Contrast stitching can be found on the well-padded headband. There’s a nice level of attention to detail and, overall, the black and silver design oozes class and sophistication.

Disappointingly, the cheap-feeling plastic media control buttons, previously seen on the P5 Wireless, make an unwelcome return on the P7’s right earcup. These buttons have very little travel to them and the action of pressing each button is unsatisfying. The buttons feel at odds with the premium look and feel of the rest of the headphones. 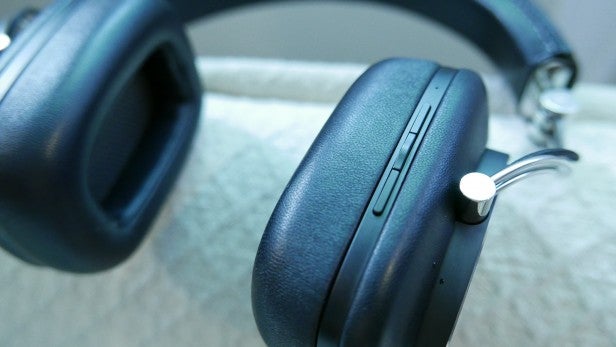 Still, they function as you’d expect, allowing you to play, pause and skip tracks, and to adjust the volume on your Bluetooth-connected device. A sliding power toggle is on the base of the right side and this can also be pressed to activate the Bluetooth pairing mode.

Bluetooth reliability was top-notch. I never experienced any frustrating and annoying drop-outs and range was fantastic. The P7 Wireless will only automatically reconnect to its first paired device rather than cycling through them, which is a tad annoying. Just make sure your primary device is paired first or clear the memory and re-pair accordingly.

On the left ear cup you’ll find a 2.5mm jack that you can use to connect the included 2.5mm-to-3.5mm cable. This will let you use the headphones even when the internal battery has depleted, as well as letting you listen to non-Bluetooth sources.

To connect the wire, you actually need to pop the left earpad off to find the 2.5mm jack. It means the wire is incorporated more seamlessly, making the headphones look more like a conventional wired pair. It also means you’re less likely to accidentally yank the cable out. It’s a simple but elegant touch that I appreciated. 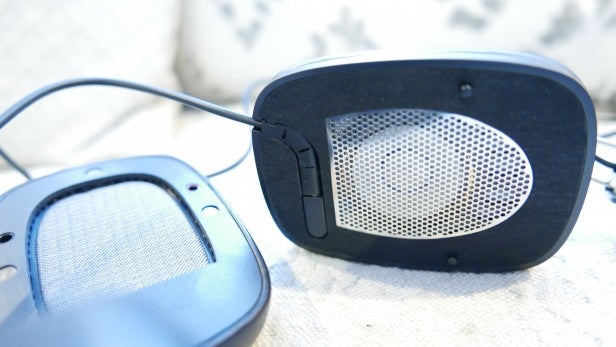 There are also integrated microphones and I found the hands-free calling quality to be great. Callers had no problems hearing my voice, nor I theirs.

You charge the headphones through Micro USB and you can expect 17 hours of battery life off a single charge. In my first week of testing there was still plenty of juice left at the end.

A padded case is included, which is attractive and complements the headphones nicely. I felt the case was a little small, however, so it was a tight squeeze tucking the collapsed headphones and cables in. 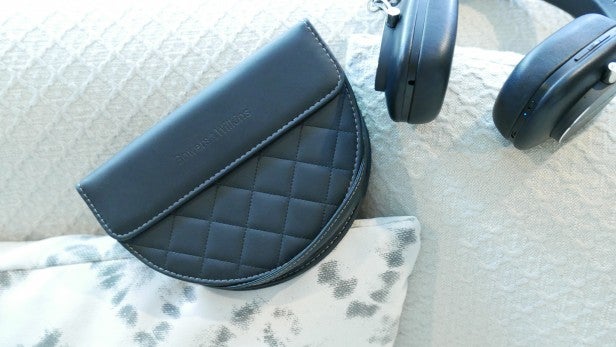 Bowers & Wilkins definitely has a distinct house sound signature, and that’s evident again here. There’s the same punchy bass that features across all of the company’s headphones, but it feels like it’s been dialled up a notch slightly.

It could be an effect of that aforementioned newer, improved memory foam. But whether it’s the sound of a bass guitar or an ’80s synth bass line, there’s a lot of pleasing warmth and tonality from the 40mm drivers.

Throw on Menahan Street Band’s ‘Make The Road By Walking’ and the bass-infused intro is the first thing you notice. The bass has some growl to it and it brings an extra dimension and energy to the song. The sub-bass in particular is emphatic. 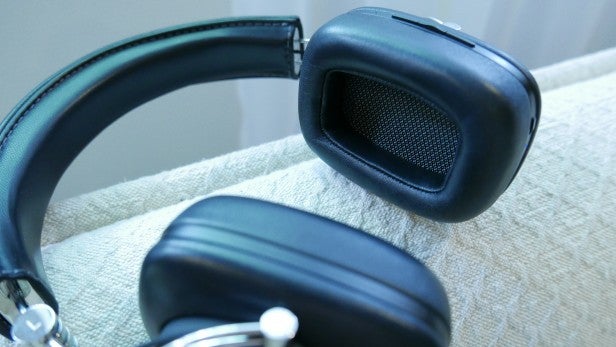 There’s a lot to like about the treble, too. It never veers off into brightness or harshness. The mid-range doesn’t feel as congested as on the P5 Wireless. It’s helped by some excellent stereo imaging – sounds have distinct directionality.

Listening to Lianne La Havas’ live rendition of ‘Say A Little Prayer’ and her voice floats above, and in front of, the live audience. Return to Menahan Street Band and your mind can place the direction and location of the trumpets in ‘Three Faces’ and the individual sounds of percussion instruments.

The P7 Wireless’ sound signature isn’t one that lends itself to critical listening – it’s too warm for that – but it’s still a very enjoyable experience. As you’d expect for this price, the P7 Wireless support the Bluetooth aptX codec for better wireless sound quality from compatible devices.

Should I buy the Bowers & Wilkins P7 Wireless? 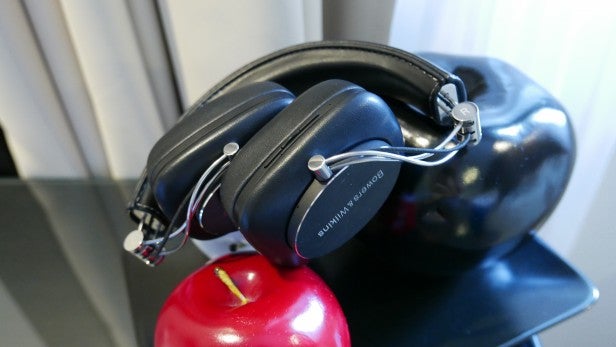 Considering these are landing at the original launch price of the P5 Wireless, this makes the P7 Wireless a compelling prospect. Unless you need a smaller, on-ear design, they’re the superior-sounding pair and easily my preference.

Still, £320 is a lot of money for a pair of wireless headphones, and they don’t have active noise cancelling. While the Bose QuietComfort 35 don’t quite match up when it comes to sound quality, sounding a little more lifeless, they offer superb ANC and cost less.

Third time’s the charm for Bowers & Wilkins and Bluetooth – the P7 Wireless look and sound great.