The original Bowers and Wilkins Zeppelin changed the face of iPod speaker docks, proving that you could squeeze hi-fi quality sound out of an iPod. So good was the Zeppelin in fact, that it grabbed the Product of the Year award in 2008, beating off some stiff competition in the process. Not only did the Zeppelin sound fantastic, but it also looked wonderfully stylish too, making it ideal for anyone whose home looks like the shop floor at Heal’s. 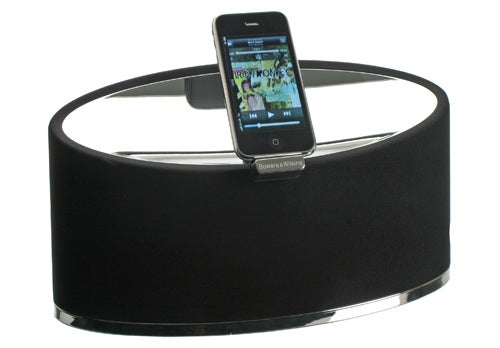 All that said, the one thing that most people don’t realise about the original Zeppelin is just how big it is – you really do have to dedicate a decent amount of space to it in your home. So, if you’ve been hankering after that Zeppelin style and sound quality, but didn’t have space for one, Bowers and Wilkins has answered your prayer with this – the Zeppelin Mini.


The first you notice when you lay eyes on the Zeppelin Mini is that unlike its big brother, it doesn’t look like a Zeppelin. So, if the most important thing to you about an iPod dock is that it looks like an airship, you may be slightly underwhelmed by the Zeppelin Mini. However, if you can get past that disappointment you’ll realise that the Mini is still a very good looking device, and definitely one of the most stylish iPod speaker docks on the market.

The Zeppelin Mini has a kind of tubular ellipsoid shape, with a concave mirrored top surface behind the iPod mount. The rest of the device is finished in black, with silver accenting around the edges. The iPod dock sits at the centre of the mirrored section and is similar in form to the example on the original Zeppelin. The docking arm supports the iPod along its length, which means that it’s easy to operate the iPod without putting strain on the connector.


As with the original Zeppelin, the docking arm on the Zeppelin Mini doesn’t require different adapters to accommodate the different flavours of iPods. Well, that’s not entirely true, since this Zeppelin does ship with an array of adapters, because the docking arm is designed to twist through 90 degrees. The aforementioned adapters support your iPod when it’s in a landscape orientation, taking the strain off the docking connector. 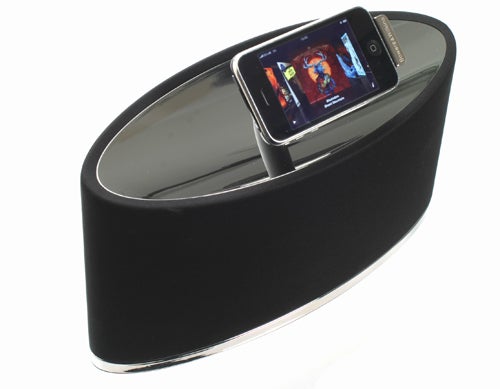 Switching the iPod into a landscape orientation allows you to make use of Apple’s CoverFlow technology, which is ideal for anyone that enjoys taking four times as long to find the music they’d like to play! A more useful application for the landscape orientation of your iPod, is that you can watch movies on it, while enjoying the sound through the Zeppelin Min, but even so, I can’t imagine myself wanting to do that too often.


The Zeppelin Mini is iPhone compatible, which means that the speakers are shielded from the mobile phone signal, and consequently your iPhone won’t try to go into flight mode whenever you dock it. That said, Anything older than a 5th generation iPod is not supported, while the iPod mini and 1st generation nano are also off the menu.

At the rear there’s a single, centrally mounted bass port, as opposed to the twin arrangement seen in the original Zeppelin. Below the bass port you’ll find the power socket, which this time requires an external power block, thus helping reduce the overall size of the unit. Next to the power socket is a 3.5mm auxiliary input so that you can connect up a second source that isn’t an iPod – at home I have a Sonos ZonePlayer plugged into the aux input on my Zeppelin. 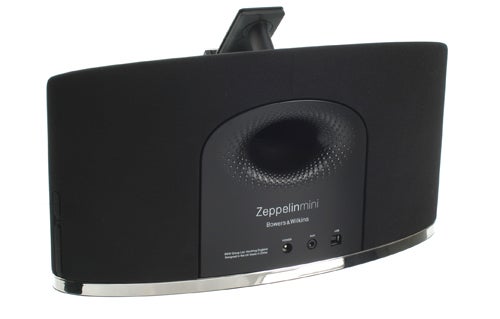 The last port at the rear of the Zeppelin Mini is USB. The USB port brings with it some notable new functionality, like the ability to synchronise your iPod while it’s docked – assuming of course that your computer is close enough. You can also update the firmware via the USB port (as you could with the original Zeppelin), but the most notable function is that you can stream music directly from a computer via USB.


The ability to stream music via USB gives away the fact that the Zeppelin Mini has an integrated DAC. So, whether you’re streaming music from a PC or an iPod, the digital data is converted inside the Zeppelin Mini itself. This means that if your source device has a less than ideal DAC, as with most computers or even an iPod, you can take it out of the equation. Although the original Zeppelin could stream music digitally via its combined analogue and optical input, music pulled from a docked iPod was taken as an analogue feed.


If you’re worried that the Zeppelin Mini wont be powerful enough to fill a room, don’t be. In fact, the Mini managed to fill my local church hall without any problems, when it handled music duties at my daughter’s fourth birthday party. Okay, so it does sound a little harsh at very high volumes compared to the full size Zeppelin, but that’s to be expected given its size. In the majority of situations – when it’s not in a hall with 20 screaming children on a bouncy castle – it produces a beautifully balanced sound. 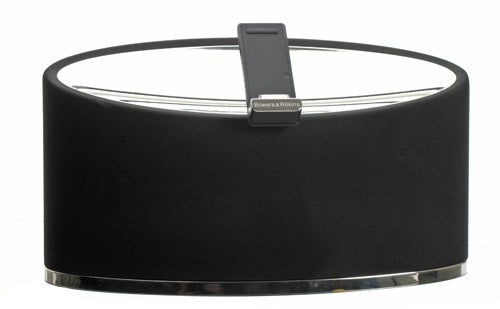 Most surprising is how expansive a soundstage the Mini manages to create – obviously you’re not going to get any real sense of stereo mixing, but it does a pretty good job of enveloping the listener, as long as you’re not sitting too close. This aspect was highlighted when I played Jean Michel Jarre’s Oxygene and the sound floated through the room in an almost ghostly manner, taking me back to the first time that I watched Gallipoli.


You’re obviously not going to get as much bass from the Mini as you do from the original Zeppelin, so if you’re preference is R&B or Hip Hop, you might find the results a little underwhelming, though not completely disappointing by any means. More acoustic fare like Kate Walsh’s superb album, Tim’s House is beautifully rendered with the Mini managing to recreate all the intrinsic delicacy of tracks like Talk of the Town and Bury My Head.

One thing that I did notice about the Zeppelin Mini is that it doesn’t respond well to low bit-rate sources. Whereas I can happily stream Napster through my original Zeppelin via a Sonos ZoneBridge with reasonable results, pumping the same feed through the Mini via my PC’s USB port was less than satisfactory. The sound produced is almost painfully harsh, with the Mini highlighting all the shortcomings of a 128kbps source file. Of course with any decent audio device you should feed it the best possible source, and sticking to high bit-rate files means that you won’t have a problem, but this is an area where the original Zeppelin proves that it’s slightly more versatile than its new sibling. 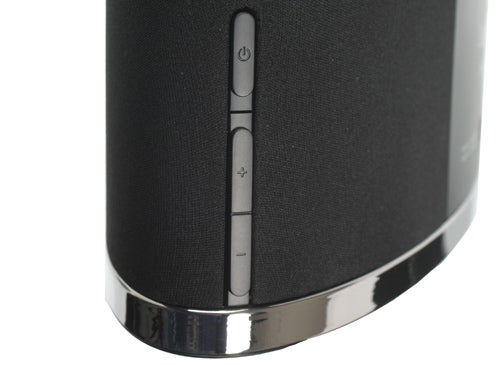 The Zeppelin Mini ships with exactly the same egg shaped remote control as the original Zeppelin, which offers control for power, play/pause, skip forward/backward, volume and input source. Neatly hidden along one side of the Mini itself are controls for power and volume, so you can control everything directly if you don’t want to use the remote, or happen to lose it. 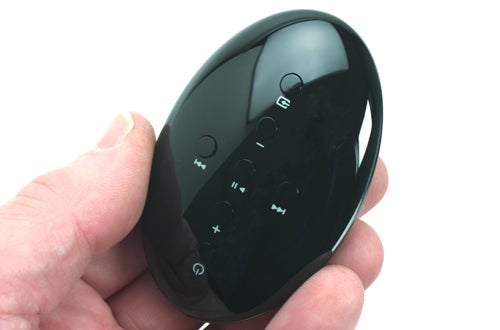 Some might complain that the Zeppelin Mini doesn’t have a built-in clock or radio, but that’s not really the route down which Bowers and Wilkins is travelling. Most of the iPod docks you find stuffed with features like clocks and radios, do so at the expense of far more important aspects like build and sound quality. The Zeppelin Mini and the Zeppelin before it are all about getting the best audio experience from your iPod, full stop! 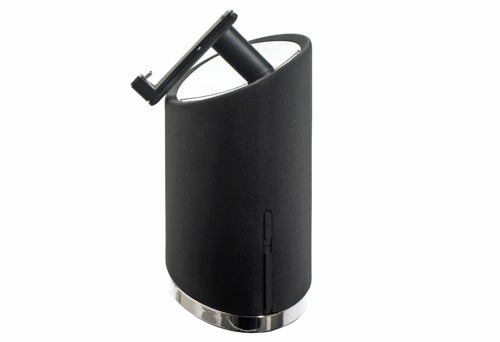 Unsurprisingly, the Mini isn’t as expensive as the original Zeppelin, but you still wouldn’t consider it cheap. With a price tag of £299, it definitely sits at the top end of the iPod dock market, but like its big brother, it goes a long way to justifying that price. That said, if you are looking for a high-end speaker dock for your iPod, I’d still suggest stumping up a bit more cash and going for the original Zeppelin, it really is worth it. If however, you simply can’t stretch that far, don’t have the space or are particularly keen on the digital iPod connection and USB connectivity, then the Zeppelin Mini won’t disappoint. 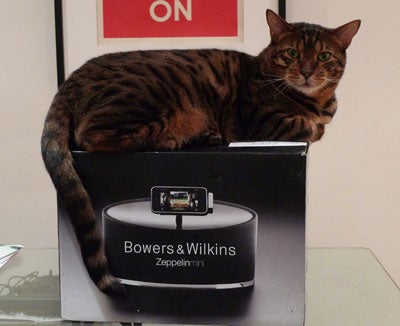 
Bowers and Wilkins has proved that it can produce superb iPod sound quality in a smaller chassis, while adding a few new features along the way. The Mini isn’t as aesthetically striking as the original Zeppelin though, and it doesn’t excel aurally to quite the same level, but considering its size, it does an amazing job of filling a room.


Bear in mind that if you have a library full of low bit-rate files, the Zeppelin Mini will highlight the limitations of those tracks, so it’s best to stick to high quality sources to get the best results. Given the choice, I’d still buy the original Zeppelin over the Mini, but there are many reasons why someone may prefer the smaller and cheaper option.