Boston Acoustics’ SoundWare XS Digital Cinema is a 2.1 speaker system with a difference. It’s equipped with built-in Bluetooth streaming, which allows you to beam music wirelessly from smartphones, tablets and PCs – as well as decoding movie soundtracks and playing back tunes from other external sources. 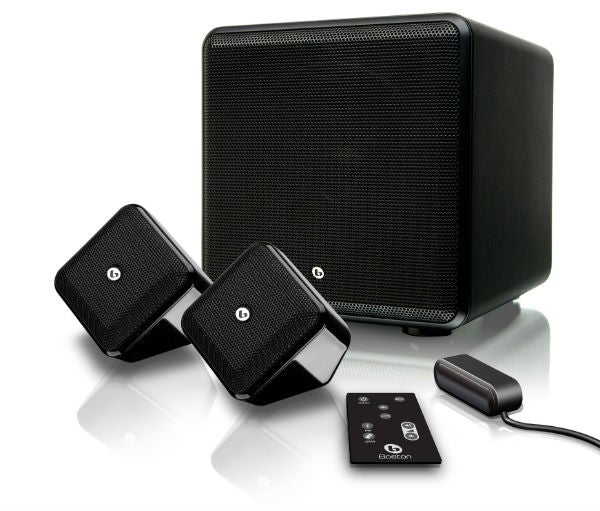 In the box is a pair of compact front speakers and an active subwoofer. And when we say compact we mean it – the SoundWare satellites measure a tiny 108 x 113mm, while the sub stands just 251mm tall, making it perfect for living rooms without an abundance of space.

Not only are they small, but they’re also beautifully formed. The satellites sport a highly distinctive multi-sided shape, with ridges and angles aplenty. But what makes them irresistible is the gloss-black finish that adds a sleek lustre to the design. They’re also available in gloss white if that’s more your bag. Build quality is superb too, particularly at this price, reaching a level of luxury akin to recent systems from Cambridge Audio and KEF.

The drivers are covered by a metal mesh with the Boston logo bang in the centre. When mounted on a table top, the drivers point upwards, as if throwing their sound up and into the room, but they can also be wall-mounted using the provided brackets

On the back of each speaker is a pair of metal springclip terminals, which are easy to access and hold the supplied cables firmly, but the small hole doesn’t make it easy to connect thicker cables. Below each terminal is a groove for easy cable management.

The subwoofer is the heart of the operation, and as such sports all the necessary connections on its rear panel. Although the design isn’t exactly radical, its matte black finish and rounded edges don’t put the system to shame either, allowing it to sit discreetly in a corner without drawing attention. 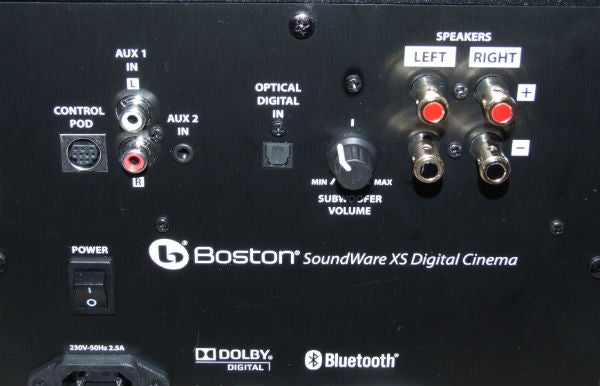 The star feature of the Boston Acoustics SoundWare XS Digital Cinema is its Bluetooth. It supports the A2DP profile and is easy to set up, entering pairing mode when we selected it for the first time and appearing on our device instantly. If you have lots of music hoarded up on your phone or iPad then this is a killer feature, making it super easy to liberate your tunes without the extra clutter of docks or cables. 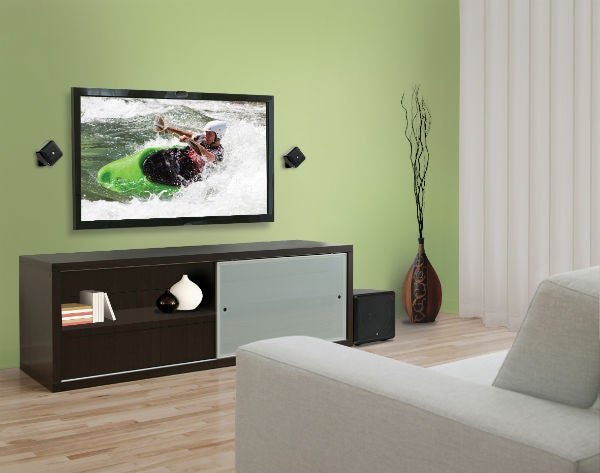 Another of the system’s key features is built-in Dolby Digital decoding. That means you can hook up a DVD/Blu-ray deck or TV to the optical input and enjoy movie soundtracks, albeit in 2.1 channels. There are Movie and Music sound modes, delivering the most appropriate EQ settings for the content you’re listening to – the Movie mode brings extra width while Music gives it to you straight.

The system is also very easy to operate thanks to the supplied Control Pod, a black matchbox-sized IR receiver that connects to the back of the subwoofer. Putting the IR receiver in the sub would be no good if it’s hidden away, but the Control Pod (and its long cable) can be placed in a convenient place with good line of sight from your seating position. It’s equipped with three LEDs indicating the selected input, sound mode and power status using different colours (red, green or blue). It’s simple but effective. 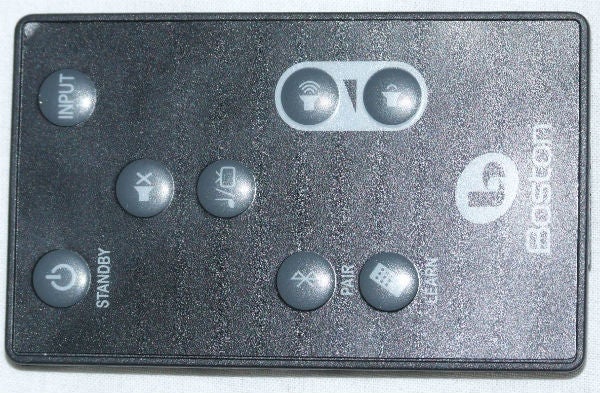 The accompanying remote is a fiddly credit-card sized affair, with a few blister buttons covering volume, input and all the other key functions. But if you don’t have the dexterity to handle this little device you can use your existing TV remote. The system can be programmed to respond to your TV’s handset using the ‘Learn’ button on the supplied remote. It’s a matter of holding down the Learn button then pressing the relevant keys one by one, which takes a little while but is well worth it for the added convenience. The subwoofer’s volume can be adjusted using the dial on the back.

As for the specs, each satellite features a 64mm woofer and 13mm tweeter to deliver a frequency response of 39Hz – 20kHz, while the front-firing subwoofer is equipped with 250W of amplification to drive the satellites and its own 203mm woofer.

In action, the SoundWare XS Digital Cinema is a revelation. It delivers a terrific 2.1-channel performance with both movies and music, demonstrating the sort of poise, punch and coherence you’d expect from a more expensive three-channel system. 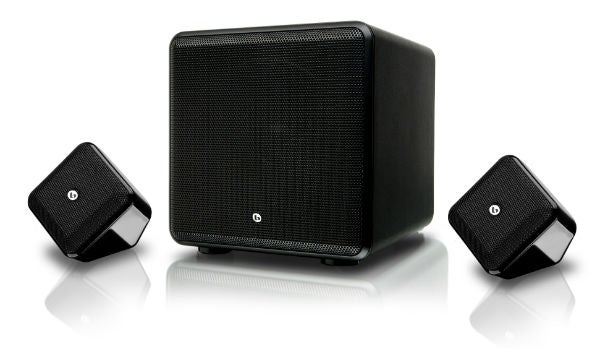 When we piped a Dolby Digital bitstream from a Blu-ray deck into the optical input, we were treated to an assertive, dynamic and smooth performance with adrenalin-fuelled action scenes. Quiet scenes are relayed with great subtlety too. The impact of Movie mode is too understated to greatly enhance your enjoyment but it does gently widen the soundstage.

Switching to music, it’s as comfortable blasting out the hip-hop beats of Q-Tip’s The Renaissance as it is with Gretchen Parlato’s sweet, sultry jazz.

Treble is crisp and poised but never bright, while the assured subwoofer lends the perfect level of depth to low frequencies without overpowering the satellites – hats off to Boston’s BassTrac technology. It’s taut and powerful, but because it’s so natural-sounding and seamless you don’t really notice it doing its thing (provided it’s adjusted properly). Every instrument, voice or effect is given the chance to shine. 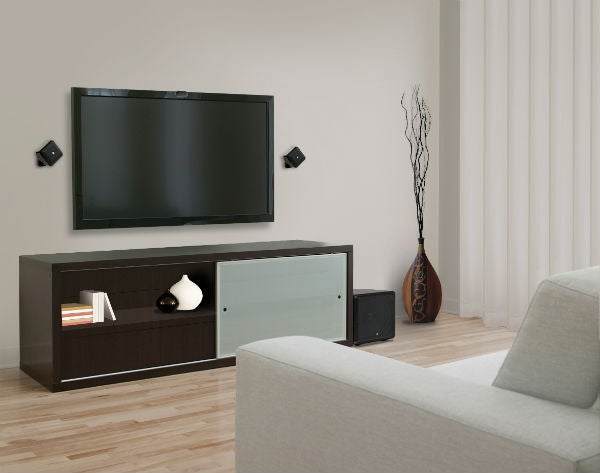 This terrific high-frequency clarity and low-end solidity is married to assured midrange reproduction, which allows movie and TV dialogue to cut through the busiest of scenes even without a dedicated centre channel. No matter what we played the results were never anything less than sparkling.

Verdict
We really can’t stress enough how impressed we are by the SoundWare XS Digital Cinema. If you’re dead against a full 5.1 system then this is the perfect alternative. Its cute, living room friendly design is easy to integrate into your living space, plus it boasts a couple of unexpected features (Bluetooth and Dolby Digital being the main two) and a simple but effective control system. But more importantly, its sound quality is fantastic – crisp and punchy but with a touch of class and composure that’s really pleasing to hear at such an affordable price point.