What is the Bose Soundwear Companion?

The Bose Soundwear Companion is a wearable Bluetooth speaker that offers hands-free calling. This rather original device sits around your neck, directing music and audio to your ears, while using its microphones for calls or Siri smart assistant controls. At the same time, you’ll be able to retain awareness of audio in the world around you.

It’s not the first of it’s kind, however – we first tested the JBL Soundgear. Is this a new category of wearable we’ll start seeing everywhere soon? Probably not, but when done well, these things have their uses. 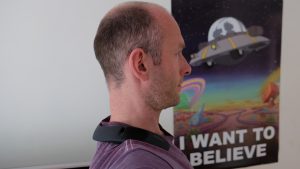 As you would expect from Bose, every detail has been thought of for its Soundwear Companion speaker. That doesn’t just mean the sound quality and speaker balance, but also the comfort and toughness of the device itself. Bose has even taken personalised expression into account.

The result is a relatively comfy unit that has far more flex and give than its frankly rock-solid rival, the JBL Soundgear. The Bose Soundwear Companion can sit on your collarbones without discomfort even for long periods of time.

But no matter how well this speaker is built, it still feels a little bit awkward. Perhaps headphones used to feel awkward too and we’ve used them for so long we’ve forgotten that? Maybe the future of these neck wearables will be the same.

Bose has used medical-grade silicone casing around a steel wire to offer strength but sufficient torsion for comfort. This can clearly be felt and makes it easy to put on the Soundwear Companion. 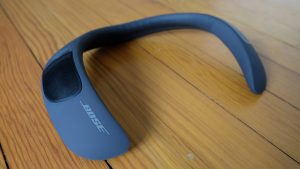 Again – sorry JBL – the Soundgear rival is rock solid and does the opposite, making sliding it on a bit claustrophobic. So this flexibility is appreciated.

Buttons are big and accessible with a satisfying feel when pressed. The volume and play/pause sit on the right, with the power and Bluetooth on the left – simple. Charging is done via micro USB, making that easy for anyone with these type of cables already kicking about.

The unit also comes with a removable cover. This must be unzipped to charge, which is a little annoying if you want it left on. You can just leave it off, but the standard silicone finish could cause sticking problems for wearers with long hair.

The Bose Soundwear Companion cases come in different styles, so you can pick the one for you. The question is: do you want to draw more attention to yourself with this thing on? And are you even going to leave the house with it? More on that below. 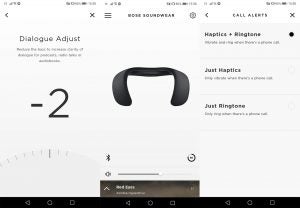 The big sell here is the ability to listen to music and podcasts, while still retaining awareness of the world around you. As such, the Bose Soundwear Companion does its job well – because the speakers are sufficiently far from your ears for that to work.

What Bose says makes this speaker even more special is waveguide technology. This system uses 11-inch waveguides in the neckband to port sound out at either end. The drivers push the air through the waveguides and out of the ports that are angled towards the ears of the wearer. This should result in a more personalised listening experience, without bystanders having to hear quite so much sound bleed as they would from, say, a regular speaker.

The next big positive on the Soundwear Companion is hands-free calling. Bose simply says it uses an ‘advanced microphone’ without any talk about multiple mics or smart audio. What is actually smart here is the ability to use a connected device’s smart assistant, specifically Siri. 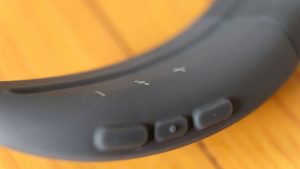 With the tap of a button you can access the smart assistant to have it carry out tasks just like you would on your iPhone or iPad – minus digging out and unlocking that gadget.

For calls, the Soundwear Companion offers both the ringtone and haptic alerts in the form of vibrations. You also have the option to only have the vibration alert, just like on your phone. This should mean you can go about the room with your phone set down somewhere without needing to touch the device.

The battery is a feature in itself. You get a 12-hour battery life – but you also have the option for a quick top-up, a 15-minute charge burst that will get you three hours of use. A helpful feature when you consider you can still wear this while charging at home, or even using a mobile charger if you have a long enough cable. 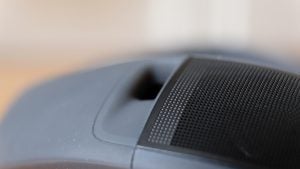 The Soundwear Companion has a well balanced sound, although doesn’t have the bass it purports to offer. While it’s helpful to avoid too much vibration through your collarbone, it can mean less impactful sound than a good set of headphones might offer. That said, it’s plenty for most music. You quickly adapt to the new norm and appreciate the quality, while still taking in the sounds of the room around you.

The sound is also not as localised as you might expect. After trying the JBL Soundgear – essentially speakers slapped onto your neck area – expectations for Bose were high because of its waveguide tech directing audio to the wearer.

The reality is a negligible difference. Anyone else anywhere in the room can still hear pretty clearly what’s being listened to, even if you’re playing music quietly. No matter how much you ‘point’ the speakers, they’re still speakers.

Even bad headphones bleed enough audio to be heard externally in some cases, so a speaker was always going to do the same. In the case of JBL, this was forgivable as the Soundgear never claimed to offer localised sound. But Bose suggests it does with this waveguide talk. So don’t be misled – this is very much a speaker system.

Good sound is appreciated as you walk around the house and there’s plenty of power too, so you can rock out with the speaker sitting snugly in place even with the most vivacious head bang. And yes, I gave it the Iron Maiden test. Everything remained in place without the cover on thanks to the silicone grip – but it was a little less solid with the material case zipped on. 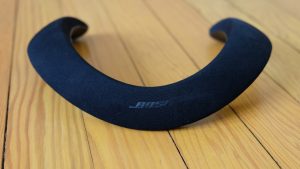 The slight flex doesn’t just absorb movements – it also makes for a comfortable fit. But despite the best efforts of Bose, this is still a speaker on your collarbones. I did get used to it, but still noticed it. Although this could perhaps be said of headphones as well, at least they are cooler to wear.

The design of the Bose Soundwear Companion is great, but you’ll still get some looks wearing this in public. Mainly because it’s like going out with a boombox to attract attention. Since headphones exist, this is always going to be offensive in public. As a result, it’s an at-home or, at a push, an in-office piece of kit.

Functionality is there for the office and home, with that hands-free system working really well. Even with a single microphone, the audio pick-up is so good anyone on the other end can’t even tell it’s a hands-free call.

Buttons make it easy to use, and the button and mic combo also works well for Siri smart voice controls. But when you can generally access this with your voice alone, it’s a probably a bit of a novelty.

Battery life is seemingly good at 12 hours. That said, a decent wireless speaker or a good pair of wireless headphones can get you nearer the 30-hour mark. So perhaps that battery isn’t so amazing, but a shorter life and lighter, more comfortable headset is a fair trade-off. 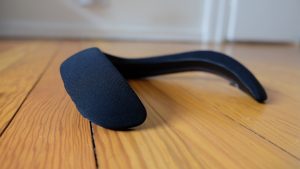 Why buy the Bose Soundwear Companion?

If you take a lot of calls hands-free, enjoy music and podcasts – all at home or in the office – then the Bose Soundwear Companion could be for you. If you need to stay aware of your surroundings, say, as a parent at home or a boss in the office (as most offices won’t likely tolerate you walking around with this blasting out), then this is a winner.

Stay-at-home mums and dads will appreciate this as a way to stay connected, keep entertained and still listen to their little ones. Office folk who want a hands-free kit with top quality audio may also like this.

The Bose Soundwear is a great example of a wearable speaker. It’s relatively comfortable, has a decent battery life and excellent sound quality, and it carries out hands-free calls at a high-quality level.

The Bose Soundwear is good at what it offers, even if it’s a bit unnecessary.