What is the Bose SoundTouch 300?

The Bose SoundTouch 300 is a premium soundbar equipped with Wi-Fi, Bluetooth and multiroom functionality. It streams music from Spotify, Deezer, Amazon Music and NAS drives via the SoundTouch app, while a raft of nifty audio tech delivers powerful home cinema sound on movie night. The best part is that it does all this from a slim, clutter-busting bar that slips into your room with minimal disruption.

Never one to blow its own trumpet, Bose reckons the SoundTouch 300 offers “the best performance, spaciousness and bass of any one-piece soundbar of its size”. A bold claim, indeed, given the quality of recent one-piece soundbars from Q Acoustics, DALI and Yamaha – let’s find out if the Bose lives up to its promise… 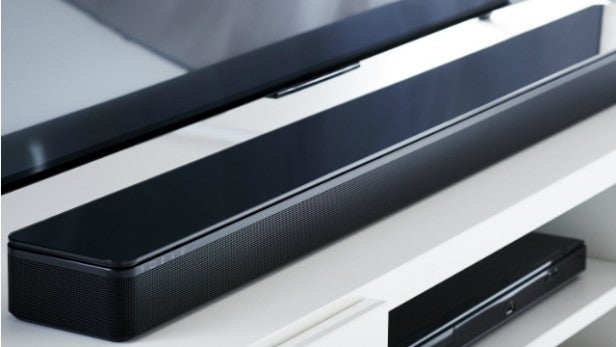 One thing’s for sure – the Bose is a beautifully made soundbar that comfortably lives up to its price tag. The wraparound aluminium grille and tempered glass top panel lend a sense of luxury and elegance, as well as making it reassuringly weighty.

The sleek black finish and slim dimensions also boost its living room appeal. It measures 57mm high by 978mm wide, which suits TVs from 40in upwards, and should also stay well below most TV remote sensors. You can mount it on the wall if you prefer, but you’ll need to fork out for the £35 WB-300 wall bracket. 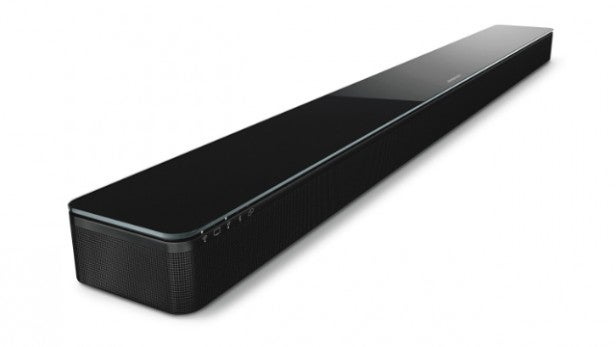 The lack of an LED display creates a clean, minimal fascia, but doesn’t help when you’re trying to work out which input is selected or for tweaking the audio settings. All you get is a row of tiny LEDs that indicates the Wi-Fi status and selected inputs – Bluetooth, SoundTouch, TV; they’re difficult to see from the sofa.

One of the lights blinks when you adjust the volume and stops when it hits maximum. When adjusting the bass, the position of the light in the row tells you the current level. It all works fine, but a numerical display would make life much easier.

Similarly, the complete absence of buttons means there’s no up-close operation – all the controls are reserved for the supplied universal remote and companion smartphone app (both of which we’ll come to later).

On the rear is a useful range of sockets, although Bose doesn’t exactly push the boat out for the money. There’s an HDMI input and ARC-compatible output, which can pass through 4K/60p, HDR and support HDCP 2.2 – a crucial feature for owners of UHD Blu-ray decks and Sky Q. You’ll also find an optical input, Ethernet port, plus 3.5mm ports for the auto-calibration headset and the optional subwoofer.

A word of warning, though: limited space in the socketry recess makes it tricky to connect the cables. I had to pull out the HDMI lead to access the optical input, which is awkwardly placed at the back. 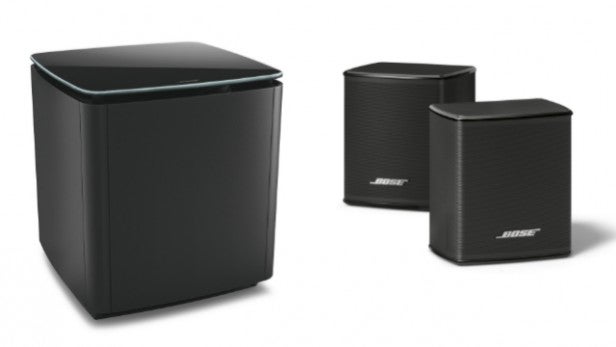 Bose’s optional sub is the Acoustimass 300, a wireless affair with a matching premium design that doubles the price of the system (£1,200). You can also add a pair of Virtually Invisible 300 wireless surround speakers for £250, or buy all three for an eye-watering £1,450. Bose sent us the soundbar on its own.

The SoundTouch 300 comes equipped with Wi-Fi, Bluetooth, NFC and Dolby Digital/DTS decoding. The most compelling feature is SoundTouch, Bose’s multiroom system. Connect the soundbar to your network, download the SoundTouch app onto your smartphone, and you can stream music from a range of services or your own network servers. 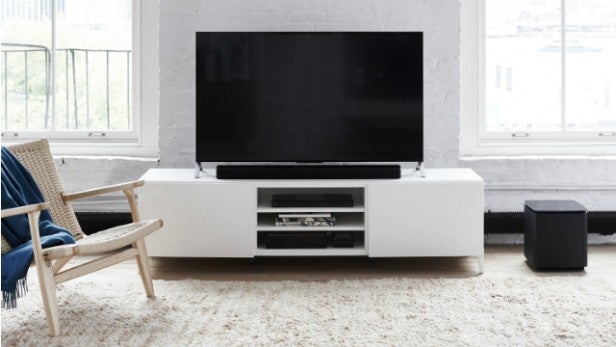 The app puts Spotify at your disposal, although you’ll need a premium account to use it. Unusually, Spotify is integrated into the SoundTouch app itself, which works a treat and saves the hassle of jumping between apps. In fact, the app’s homepage is based around Spotify content.

You can also stream music from Deezer, Amazon Music or internet radio, and send it to multiple SoundTouch speakers on the same network.

Tracks, albums and radio stations can be stored in six presets, providing quick access to your favourite content. This is more useful than it sounds, particularly if you have a huge music library and don’t want to hunt for the same songs every time.

Bose is sketchy on power output, but the SoundTouch 300 uses “custom drivers” with proprietary audio tech to enhance audio performance.

The PhaseGuide array sends audio signals to left and right of the room to create a wide, spacious soundstage, harnessing reflections from the side walls. Meanwhile, QuietPort ensures deep, clean bass and keeps distortion at bay as you increase the volume. There’s a dedicated bass volume and a Dialogue mode that adjusts the tonal balance to improve the clarity of vocals.

Soundbars are usually a cinch to install, but I had a few problems with the SoundTouch 300. The most frustrating problem was that ARC wouldn’t work with my Samsung TV – in the end, I gave up and connected the set to the optical input.

And at first I couldn’t hear any Dolby Digital or DTS sound from my Blu-ray deck through the HDMI input; turns out you have to activate a “Direct Audio” setting deep in the app’s setup menu, which is unusual. 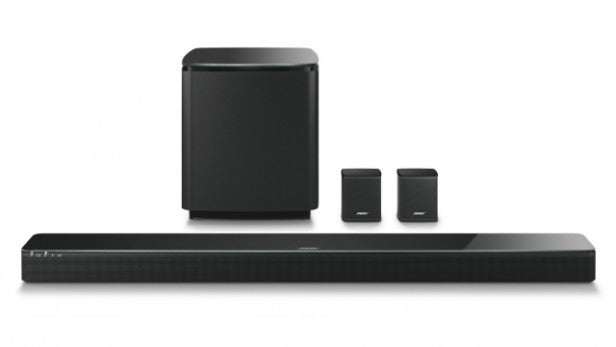 The soundbar connects to your Wi-Fi network through the SoundTouch phone app, which again proved tricky. It took a good few attempts for the software to find our sample, but it got there in the end.

Bose makes things easy in other areas, though, particularly audio calibration. The ADAPTIQ system adjusts the soundbar’s audio output to suit the acoustics of your room, but takes a different approach to most other systems.

Rather than placing a microphone and leaving the room, you have to wear a headset – connected via cable to the back of the soundbar – and sit in five different positions while it plays the test tones. A woman’s voice guides you through the process, and it’s fairly quick and easy. 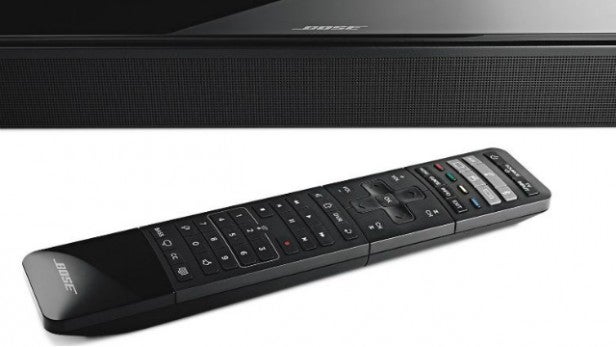 Bose’s universal remote provides a foolproof way of controlling your entire AV system. It can be programmed to control TVs, PVRs and Blu-ray decks – not just Bose-branded kit – and is reflected by the high button count (not all of which are used).

Nevertheless, it doesn’t feel cluttered or confusing thanks to its thoughtful layout and labelling. Build quality is superb, too: it feels weighty in the hand and the rubber keys are satisfying to press. 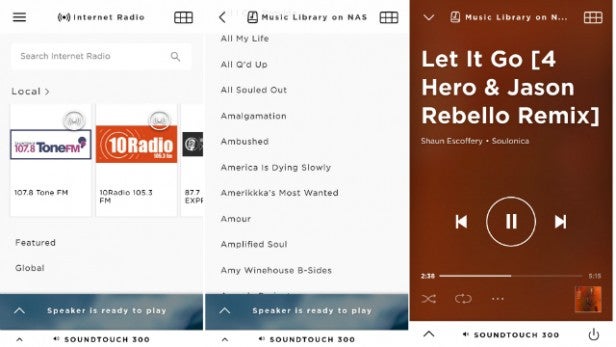 The app is one of the most polished and intuitive I’ve used. Not only is Spotify seamlessly integrated, but the clean, classy graphics allow you to navigate around NAS drives and find radio stations with consummate ease. Various tabs and sidebar menus slide in and out, allowing you to select sources, speakers and view what’s playing. 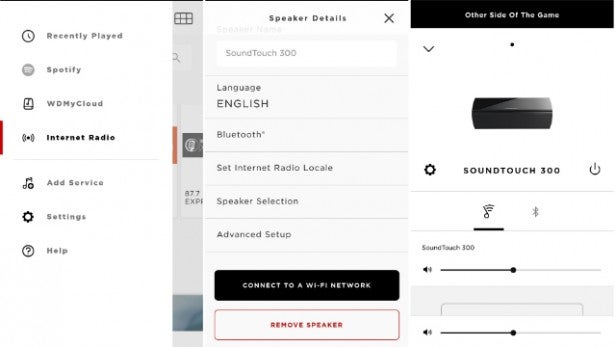 Multiroom operation is equally simple – just tap the bottom of the screen and hit “Play All” to send music to the entire system. To add a track to the Preset list, simply hold your finger on it then drag it to a free spot when the list appears.

Little touches such as this make the app a joy to use. The only flaw I found – and it’s a small one – is that you can’t jump to a particular point in a song.

In many respects, the SoundTouch 300 is a terrific performer, offering a sound that will make your pathetic TV hang its screen in shame. Fire up Chappie on Blu-ray (fed into the soundbar via HDMI) and the Bose lends plenty of clout to the boisterous action.

Despite the lack of a subwoofer, the SoundTouch 300 generates impressive bass during shoot-outs on the streets of Joburg. Meaty explosions and gunshots fill the room, while van engines have ample body and weight. It doesn’t delve down to the lowest frequencies in the way of a dedicated sub, but there’s enough here to satisfy. 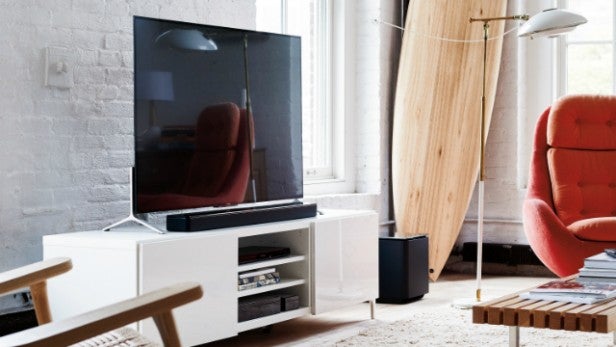 It all adds up to an entertaining sound with decent scale. However, what’s most impressive is how composed and cohesive everything sounds. There’s no booming as the action gets frantic; just a tight, solid wall of sound. You can push the volume loud with confidence, but if you do then get ready for a visit from the neighbours.

The Bose also creates an expansive soundstage that puts you right in the middle of Chappie’s street battles. It isn’t a patch on the Yamaha YSP-1600’s sound beam tech, but it throws effects beyond the edges of the TV screen and creates the impression of width and space.

Dialogue stays locked to the centre, though, with enough mid-range detail to differentiate between the shouty South African accents. 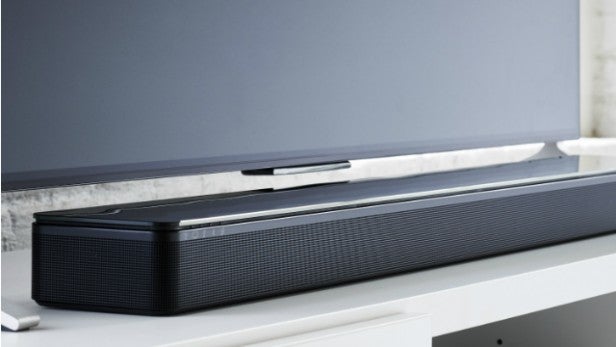 So what’s the rub? Why shouldn’t you buy the Bose instead of the Q Acoustics M3 or DALI Kubik One? Sadly, the Bose’s high-frequency reproduction simply doesn’t measure up to the best soundbars in its class. Its top-end seems strangely muted, lacking the crispness and detail needed to get you out of your seat.

Gunshots don’t snap like they do through the M3, and when Chappie smashes up a Mercedes during the carjacking scene, breaking glass and metal lacks the precision of the DALI or Cabasse Stream BAR. As a result, its sound boasts plenty of depth but a dearth of excitement and insight.

The same can be said for music playback – Gregory Porter’s rich, velvety voice on “Take Me To The Alley” is backed by a solid fusion of piano and double bass, but the percussion and hi-hats should be more open.

That’s not to say the Bose is a poor performer – it’s a rather enjoyable dinner party listen – but judged against sophisticated rivals such as the DALI Kubik One and Q Acoustics M3, there’s simply no contest. 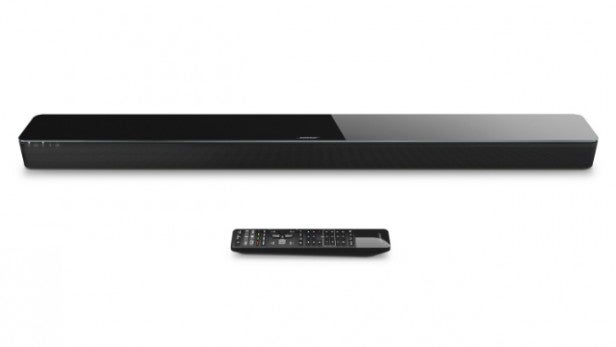 Should I buy the Bose SoundTouch 300?

The SoundTouch 300 has plenty going for it. Features such as 4K-ready HDMIs, effortless multiroom streaming and ADAPTIQ auto-calibration make up a strong “pros” column.

Add to this an elegant, streamlined design that easily lives up to the price tag. And in terms of performance, the Bose doesn’t struggle to fill a room, even without the Acoustimass sub in tow, bringing a decent sense of scale to proceedings.

But a lack of top-end subtlety and crispness let the side down, making it a much less satisfying listen than the DALI Kubik One or the Q Acoustics M3. Their lack of network streaming levels things up a little, but on sound quality alone, the Bose can’t compete – and issues with ARC don’t help its cause.

Bose’s beautifully made soundbar delivers a loud, bass-heavy sound – but it lacks the bite and sparkle of its illustrious rivals.