What is the Bose SoundLink Micro?

Rugged portable Bluetooth speakers are currently all the rage in the world of audio, with every man and his dog is trying to get into market.

That’s why it’s no surprise Bose has decided to do the same with its SoundLink Micro. The Bose SoundLink Micro is the smallest and most affordable model in the iconic audio company’s Bluetooth speaker line, with pricing starting at a modest £99.

Featuring a close-to-indestructible and absolutely dinky design, the Micro is one of the best portable speakers available. But, ultimately, a series of minor issues mean it falls just short of dethroning the market-leading UE Wonderboom. 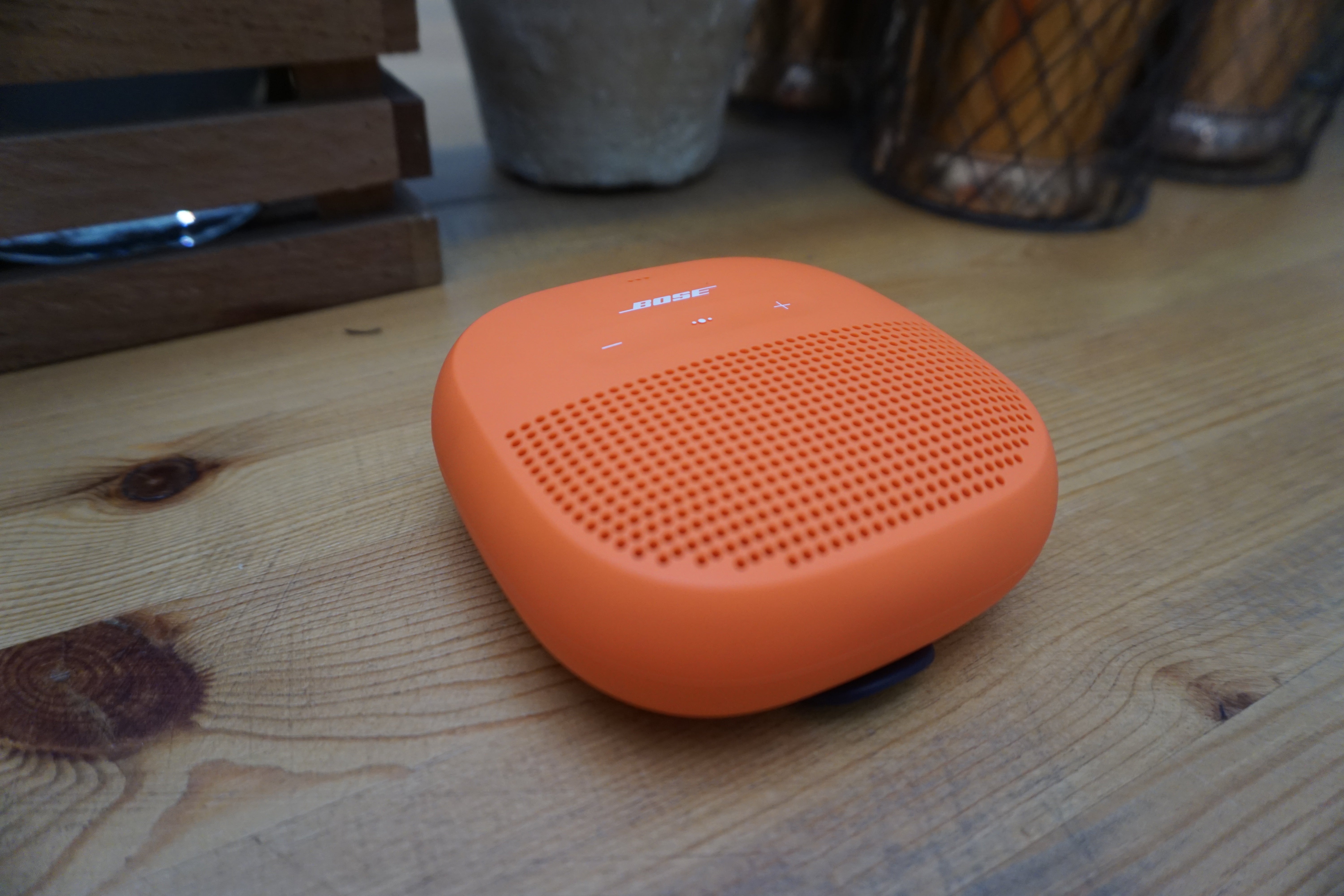 Unless you opt for the orange model I reviewed, the SoundLink micro is a pretty unassuming bit of kit. The pebble-shaped unit features a basic top-facing speaker (when laid flat) and a Micro USB charging port on its side. You’ll also find the usual assortment of volume, power, pairing and voice controls along its top and sides.

Some may bemoan the lack of flashiness, but I’m a big fan of the design for a few key reasons. For starters, it’s outright dinky, measuring in at a modest 9.8 x 9.8mm. The dimensions, coupled with its flat design, make it significantly smaller and more travel-friendly than most competing Bluetooth speakers, like the UE Wonderboom. Second, it’s rugged as hell. The scratch-resistant rubber chassis can take some serious punishment. As well as surviving my drop tests unscathed, which involved me dropping the speaker onto a hardwood floor, it easily withstood the wrath of a rampaging toddler that mistook it for a club, not speaker – in a game of SoundLink Micro vs babysitter’s crown jewels, the speaker will win.

The IPX7 certification also means it’s water-resistant, which’ll be a boon for people on the market for a shower speaker. Though be warned, unlike the Wonderboom the SoundLink Micro isn’t buoyant and will sink to the bottom of pools and baths.

Fortunately this isn’t too much of an issue thanks to the SoundLink Micro’s intelligently placed strap. The strap is directly attached to the Micro’s bottom and can be used to easily fasten it to a variety of objects. The Bose rep at the London launch pimped the strap as being ideal for extreme sports fanatics, like mountain bikers, who want to pump out music while they gallivant around forests and cliffs. But for me it’s useful in the house. The strap makes it easy to use the Micro in places like the kitchen and shower, where space is at a premium and you don’t necessarily have a wealth of flat surfaces to lay a speaker. 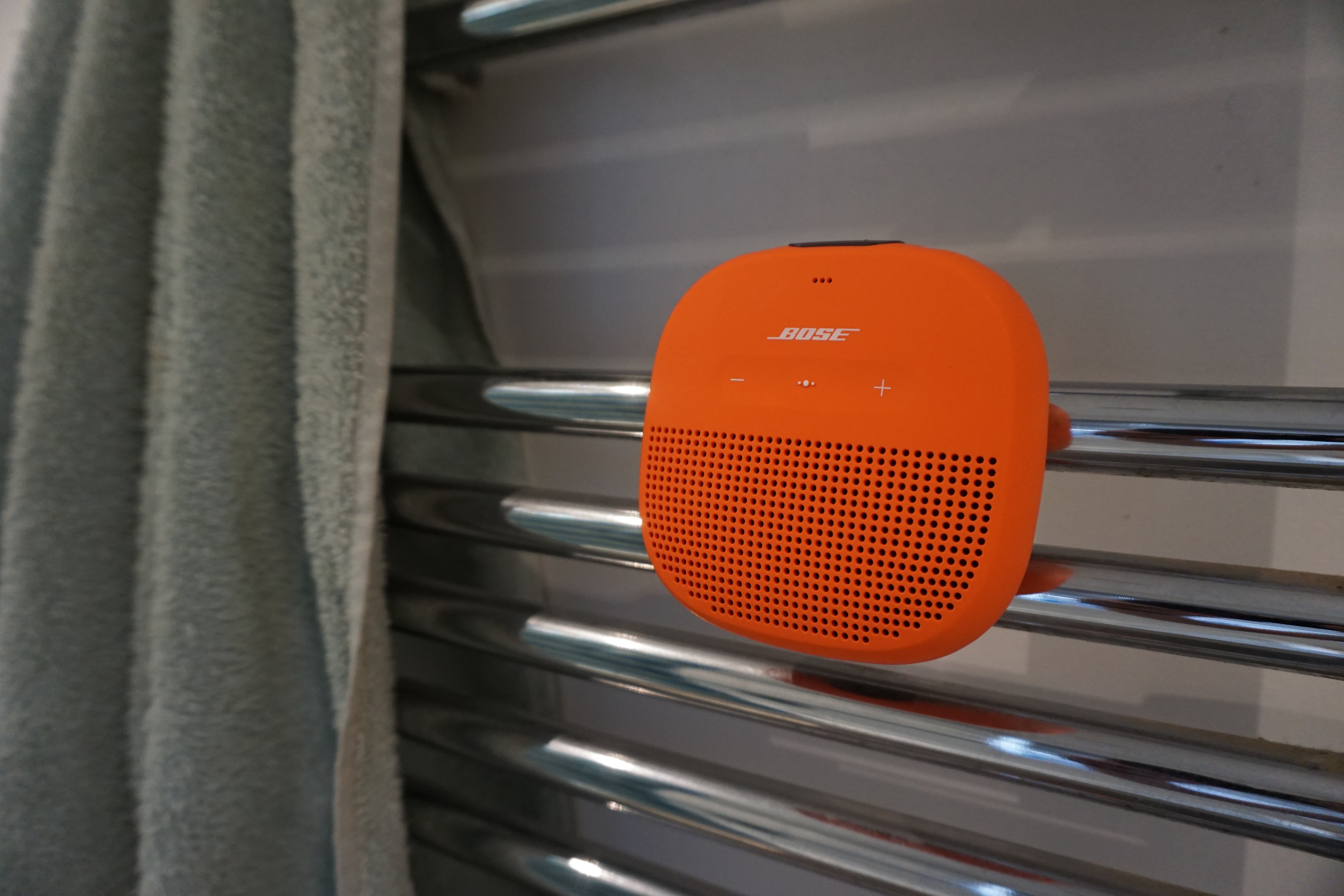 The six-hour quoted battery life is pretty par for the course for a speaker this size, and with real-world testing that proved accurate. Listening to music with the volume at 50% the speaker managed a full six hours, though battery life dropped to around four hours with the volume maxed out.

My experience with speakers the Micro’s size traditionally hasn’t been positive for a couple of reasons. First, because their size means max volume levels are never high enough for outdoor listening. Second because they almost universally have weak bass, terrible treble and generally sound bad.

Which is why I was surprised how well the SoundLink Micro performed. Maximum volumes aren’t on the same level as from the larger Wonderboom, but they’re still insane for a speaker the Micro’s size and more than high enough for park and lounge listening. In general I actually found myself limiting the volume to 50-75% when using the SoundLink Micro each morning out of fear I’d disturb my neighbours. Sound quality, while not perfect, is also pretty darned impressive. The speaker’s “custom-engineered transducer and miniature dual-passive radiators” offer surprisingly meaty bass. Listening to classic blues and rock, walking bass lines had a pleasing rumble and were far more powerful than I expected.

If anything the bass is actually a little overpowering. Listening to post-rock the bass would regularly overpower more subtle elements of the sound, making it hard to pick out the crescendo guitar parts and string section.

Punk tracks had nice bite and the breakdowns were suitably powerful. More complex, textured mids in jazz and classic songs, while audible, generally aren’t as pronounced as they are on more expensive, slightly larger speakers, though this is an issue on all small speakers. My only quibble with the Micro’s audio is that, unlike the Wonderboom, the Micro doesn’t offer 360-degree sound. Instead audio is pushed straight out of its top (or front, depending on how you’ve mounted it). This means that audio quality and volumes quickly deteriorate if you move out of the speaker’s path, which will be an issue if you plan on using it at parties or group hangouts.

In theory you can get around this by using the speaker’s pairing functionality. As with many Bluetooth speakers, the Micro has the ability to pair with other speakers in the same family to boost volume or create a stereo effect. However, I didn’t get a chance to test this, as the Micro was the only SoundLink product I had to hand. Why buy the SoundLink Micro?

If you’re on the market for an ultra-portable, affordable Bluetooth speaker that won’t break the bank then you should definitely consider the SoundLink Micro. Featuring a compact, rugged design, an intelligent strap, and surprisingly loud audio, this speaker is one of the best on the market.

Its only serious shortcoming is that, with pricing starting at £99/$100, it’s a smidgen more expensive than its archrival, the UE Wonderboom. The latter, while a little bit larger, offers the added bonus of 360-degree sound.