Neatly built and with signs of promise, but the Bosch Smart Home Heating and Radiator Thermostat lacks some basic features and is fiddly to control.

What is the Bosch Smart Home Heating and Radiator Thermostat?

There are plenty of systems that require you to upgrade your existing heating system and boiler connection. The Bosch Smart Home Heating and Radiator Thermostat system is different, giving you smart thermostatic radiator valves that complement your existing heating. As such, for renters or people with older boilers, this system could be interesting.

Neatly, the system integrates into Bosch’s main smart home app, so you can control the optional security system and your heating from one place. A wide range of starter kits helps you find the system best suited for your home. However, a fiddly app and lack of a full boiler control upgrade detract.

I started with the Indoor Climate Starter Kit, which gets you the Smart Home Controller (the hub), two Radiator Thermostats and a Door/Window sensor, which lets the heating in a room turn off when you have a door or window open.

The hub is a pretty standard design: a square box that you’ll want to place out of the way. It plugs into your router via Ethernet and then into the mains. If you wanted to upgrade to the security system, this controller would be the brains behind that, too. 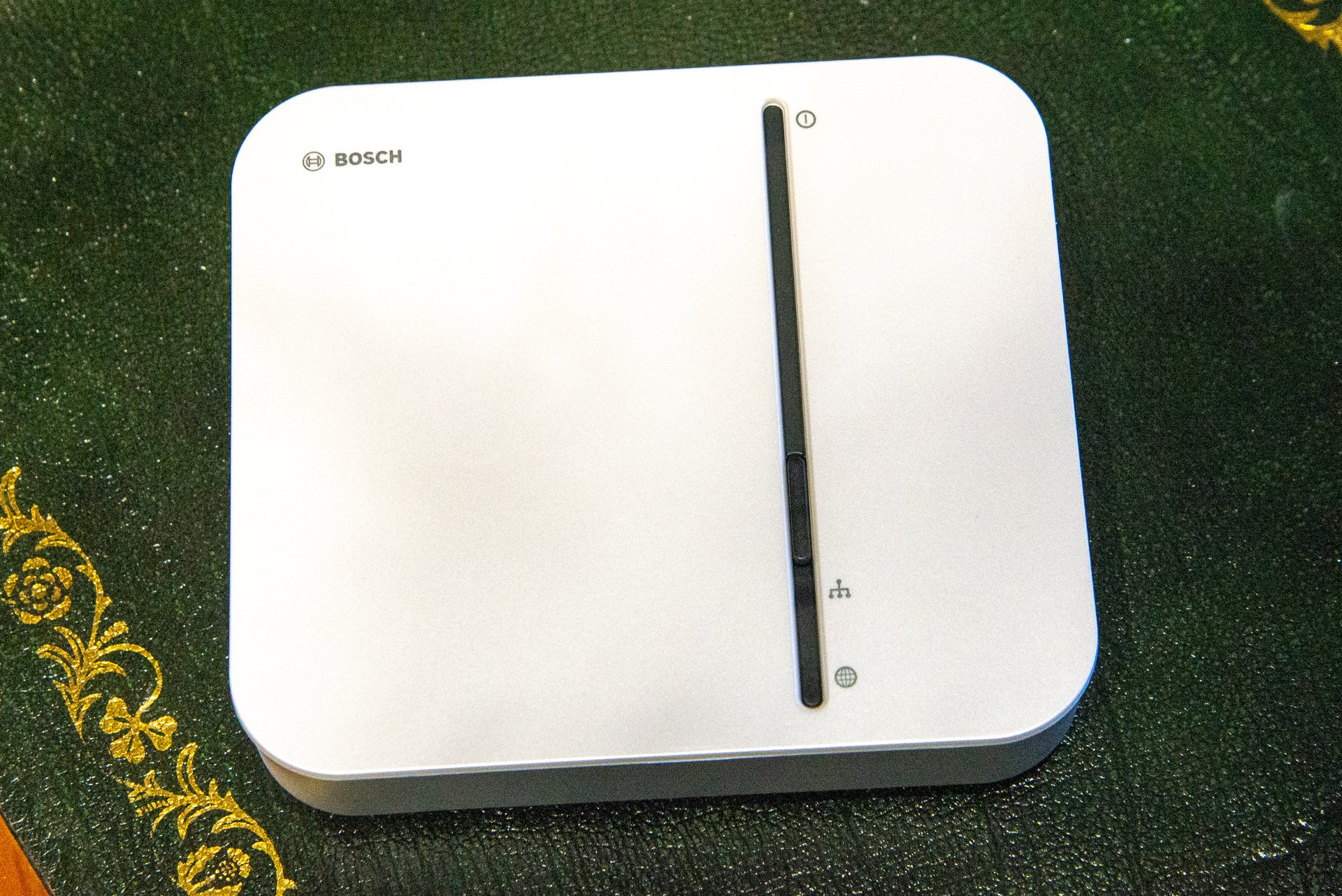 The radiator valves are big chunks of plastic that replace your existing valves. Bosch provides adapters in the box for multiple fittings; I had no problem fitting them to my radiators. 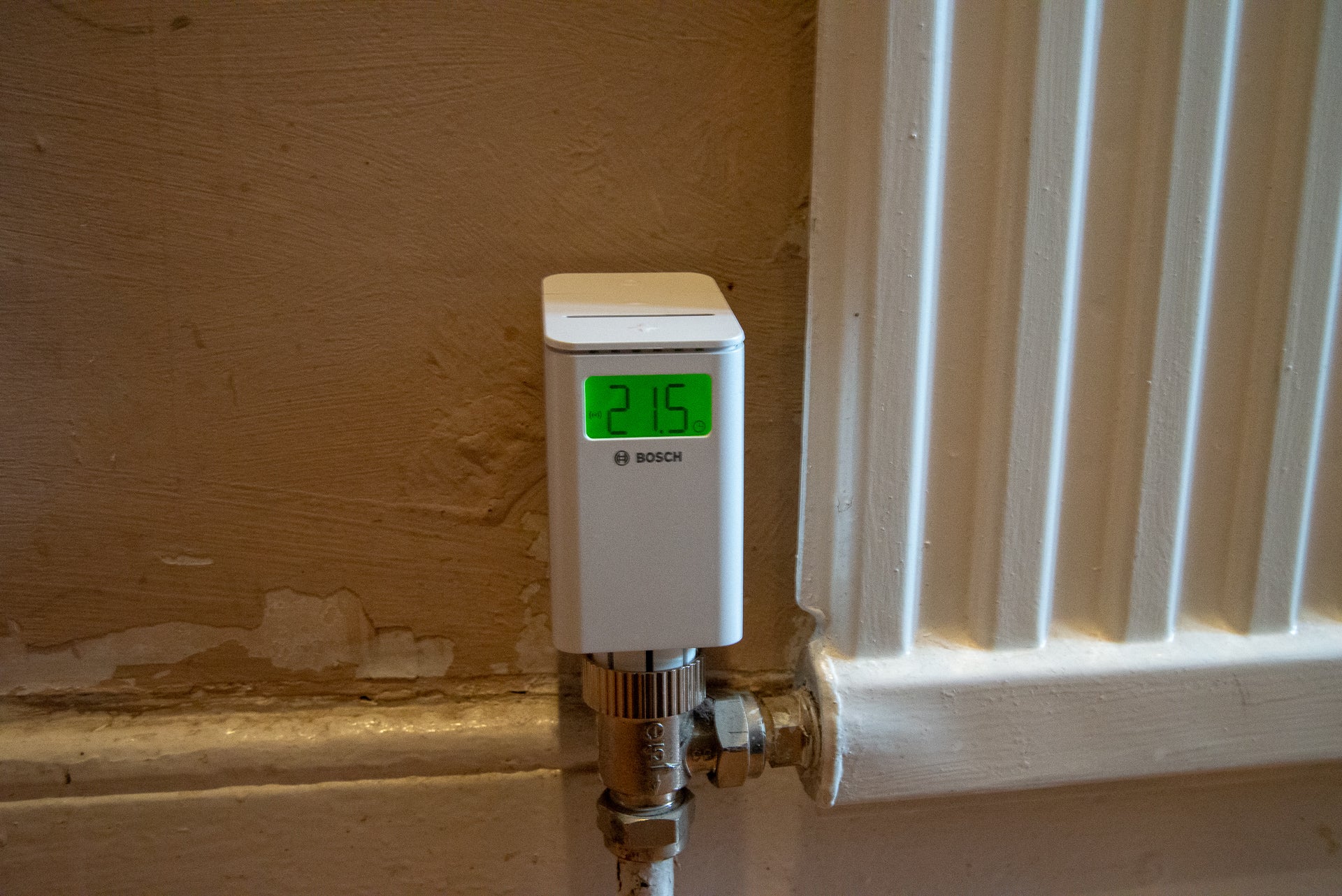 Finally, there’s the Door/Window sensor, which you can attach using the sticky fixings or by screwing the mounting brackets into place.

You can buy additional Radiator Thermostats (£54.95) and Door/Window sensors (£34.95) if you want to expand your system. There’s also a range of alarm parts, including a siren and motion sensor if you also want to protect your home. Cleverly, the Door/Window sensors can operate as part of the alarm and part of your heating system. 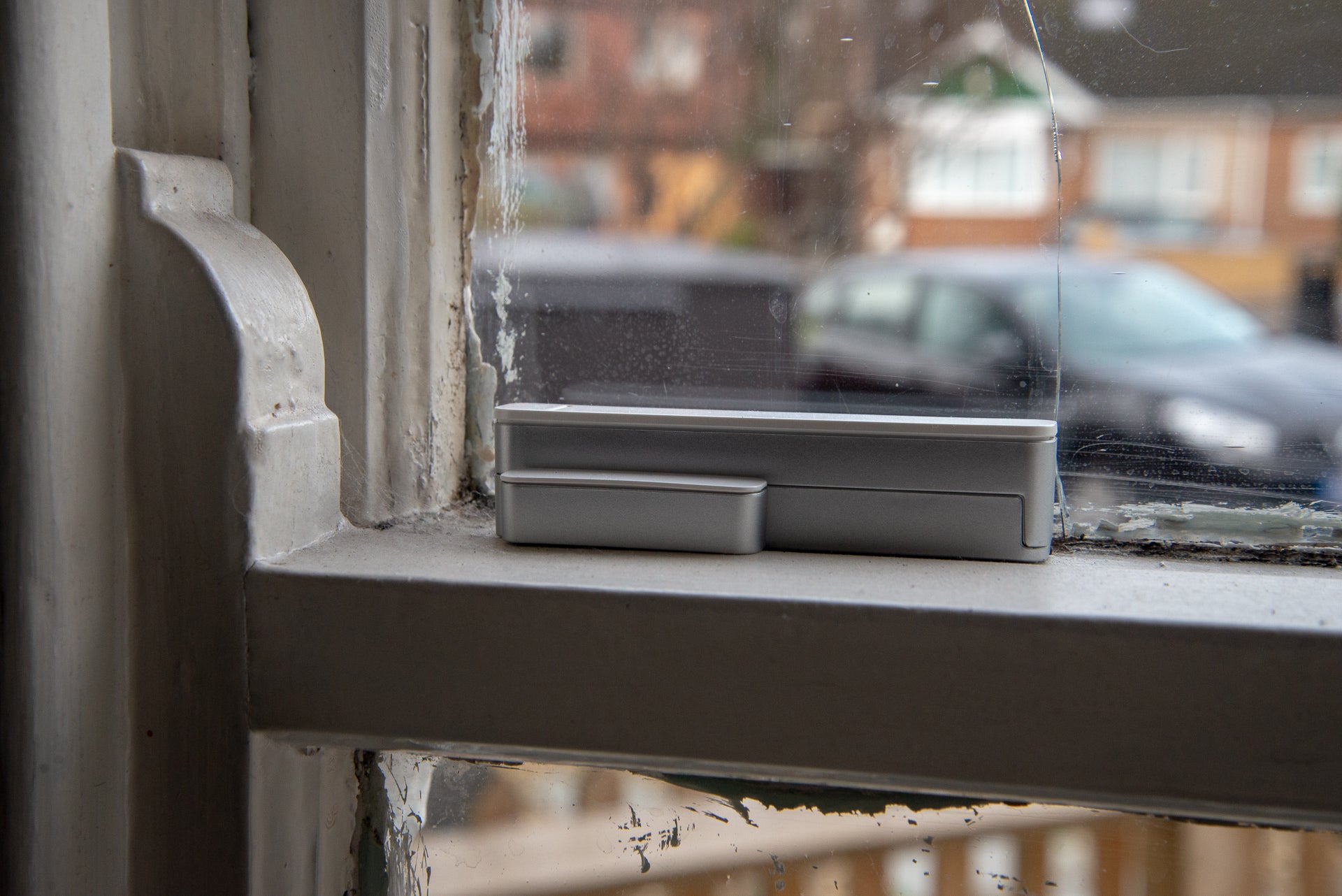 It’s fairly straightforward to add the Radiator Thermostats into the Bosch Smart Home app. Once they’re connected, the thermostats first have to run through a configuration phase, where they work out the maximum and minimum movement they can make to control the valve. Once done, you can group Radiator Thermostats into rooms. Where you place more than one thermostat into a room, you use a single temperature setting for all devices. 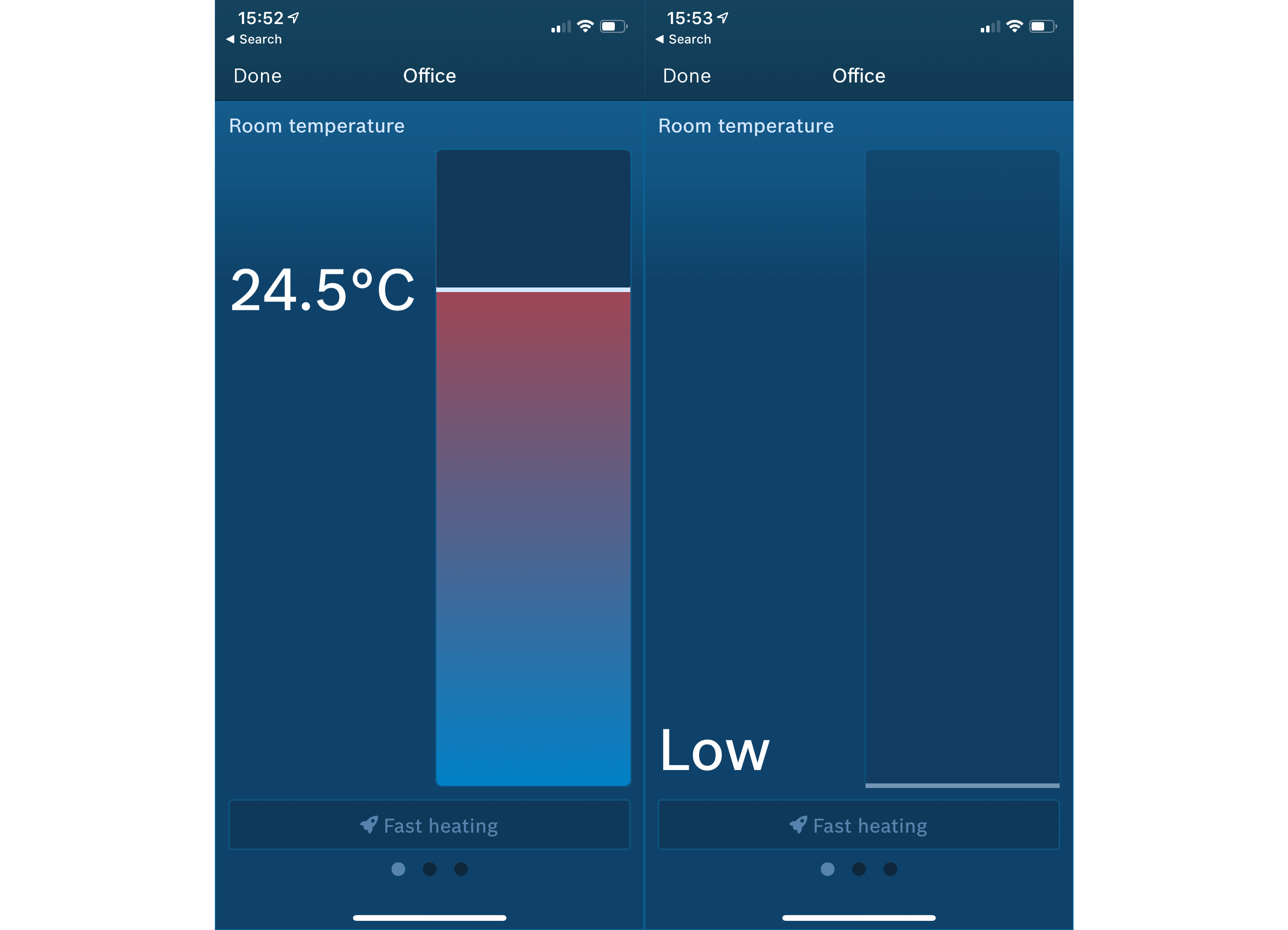 There’s also a scheduled mode. Again, this too is basic. You can set a “Warm phase” and “Cold phase” temperature, and then the schedule lets you choose which periods use each phase.

This isn’t particularly flexible, as you may want to have a room warmer in the evening when there’s no sun, and cooler during the day. It would make more sense if, like rival systems, Bosch let you set a more detailed schedule.

Once created, a schedule can be copied to different days but not rooms, which is a bit of a pain if you have a lot of Radiator Thermostats in different rooms. 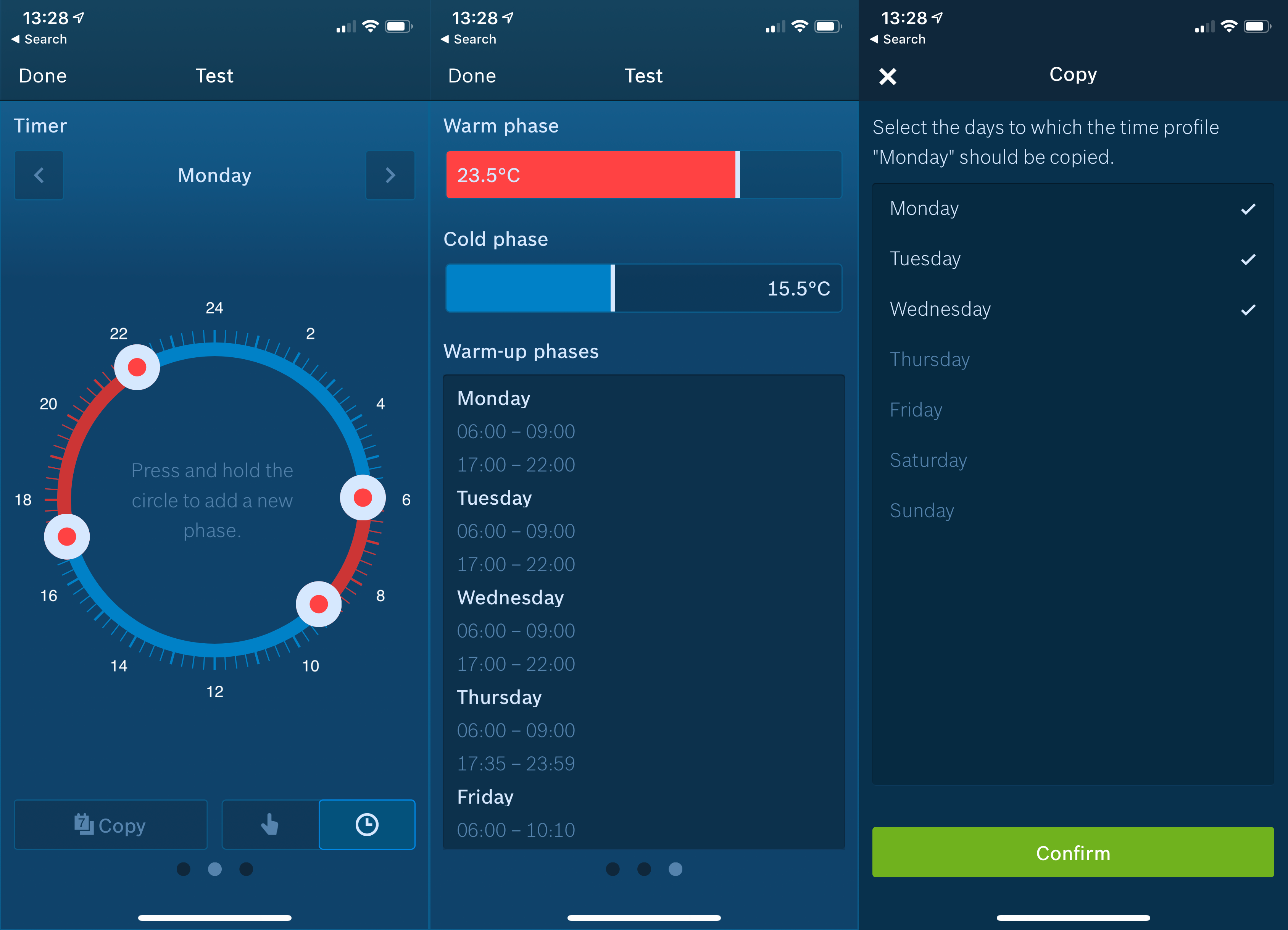 It’s important to note that since there’s no control over the boiler, you’ll still need to add a schedule to your existing controls. Depending on the settings you’ve used, this may mean that your heating shuts off before a room hits the set temperature.

Be careful, since the opposite can be true if you install a Radiator Valve near your smart thermostat: if you set the temperature too low in the Bosch app, your main thermostat may never reach temperature and shut down.

Annoyingly, both the app and the Radiator Valve only show you the set temperature, not the current temperature. As such, it’s impossible to know how warm (or cold) your rooms are at any given point. It’s strange that such a basic feature is missing.

You get smarter control when you use the Door/Window sensor. Using the pre-defined ventilation detection service, you can set the system to turn the Radiator Thermostat to Low (effectively, off) when a window or door is opened in the same room, saving money by not trying to heat the outside constantly. 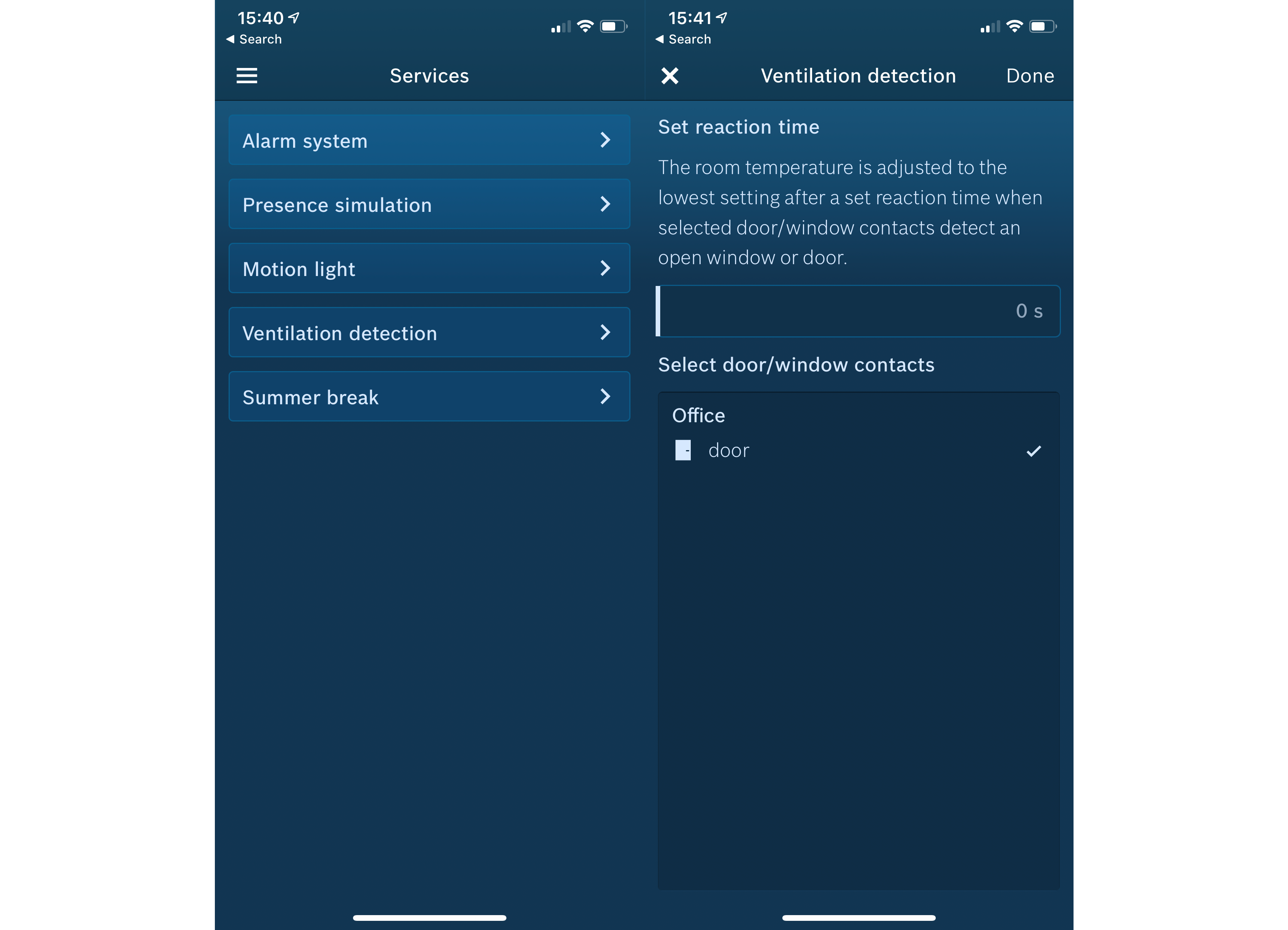 By default, the system is set to do this immediately, but you can change the delay to between zero and 180-seconds. Normally, I’d argue that implementing this feature in software is better, with the thermostats measuring the temperature drop to detect when there’s a window or door open. However, Bosch’s Door/Window sensors can also be used in the alarm, setting off a siren when the alarm is armed.

Having a dual-purpose system such as this makes a lot of sense, and you get faster, more accurate detection of a door or window being opened. However, if you’re not going to use the alarm part of the system, having a dedicated sensor adds to the overall cost.

You can also connect the Bosch Smart Home Controller to your Philips Hue lights, controlling them in a more basic way through the Bosch app. While this isn’t particularly useful, you can use the Bosch Smart Home app for Presence simulation. When turned on, the system will turn your lights on and off randomly to simulate that someone is at home. It’s a fine idea, but the problem is that the system will turn on, say, one bulb in your kitchen and one in your living room, then it will switch and turn on one bulb in the office and the hallway. Unfortunately, the system doesn’t understand rooms and that it should operate groups of bulbs to simulate someone using individual rooms.

Scenarios are a way of creating routines to control multiple devices at once. There are preprogrammed ones, including Leaving home, which turns off all lights, activates the alarm system and can turn on Simulated Presence mode. Scenarios can be run through the app or via a Bosch wireless switch; there’s no option to run them automatically.

Automations are also available and work in a similar way to IFTTT. You set a trigger (a time of day, or something happening such as a door opening), then you can set what you want to happen with an action. Actions are limited: I couldn’t set a Hue bulb to turn on or off, although I could change the temperature on a Radiator Thermostat. The only workaround is to trigger a scenario that you’ve configured to turn on the lights you want.

Changes made to a Radiator Thermostat happen immediately, with the LCD showing the change in temperature. The valve can take a few seconds to respond and start moving. As with rival products, the motor makes a high-pitched wine; it’s quiet enough, but it may take a while to get used to the sound in your bedroom.

Not being able to see the current temperature is hugely disappointing, since it makes it far harder to work out what’s going on and if the room is at the right temperature or not.

You also have to be careful about creating Automations that conflict with other parts of the service. For example, if you set a temperature on the Radiator Thermostat when a door is opened, this overrides the default ventilation detection rule and you can end up with rooms set to the wrong temperatures.

Once done, Alexa discovers your Smart Radiator Valves. With voice control you can set a specific temperature in a room, the change is made until the next scheduled set point.

There’s no Google Assistant skill available at the moment, so you can’t use your Google Home system. There’s currently no IFTTT channel for the Bosch system.

Why buy the Bosch Smart Home Heating and Radiator Thermostat?

There are the building blocks of a decent system here, but the Bosch Smart Home Heating system isn’t quite up to scratch. As well-built as the Radiator Thermostats are, the lack of temperature read-out on them and the poor scheduling detract. It’s a shame that you can’t add boiler control, either.

My guide to the Best smart thermostats has a range of alternative options. If you want a multiroom system, the Honeywell Evohome is the best choice. If you want a smart radiator system, you can use the Tado Smart Radiator Thermostats without boiler control, upgrading to full boiler control later if preferred. Since Tado’s system doesn’t rely on a window/door sensor, it’s also cheaper to buy. Either system is superior.