What is the Bosch MSM67160GB Hand Blender?

Rather than heaving a food processor onto the worktop, stick blenders provide a quick way of blitzing small quantities. However, many lack power.

Not so the Bosch MSM67160GB Hand Blender, which squeezes a low-vibration, quiet 750W motor into its slender form, and even has a Turbo button for maximum power.

As well as a four-winged QuattroBlade on its main foot for blending, chopping and pureeing, it also comes with a whisk with a gearbox (giving it extra resistance), chopping attachment for processing foods – such as garlic, onions, herbs, cheese and nuts – and lids for both the cutter and the blender beaker, so you can blitz and store the contents. Despite its motor size, it remains lightweight at 1.3kg, so it can handle heavy-duty jobs as well as light tasks.

Convenience is the name of the game with the Bosch Hand Blender, and most of its details go towards making that happen.

Its stainless-steel foot is the perfect example. Not only has it been designed to be anti-splash to eliminate the need for wiping down the worktop, its QuattroBlade – an angled collection of four sharp knives – aims to process quickly and evenly.

In a similar fashion, the Turbo button on the front removes the need to scroll up through the speeds, providing maximum blending power at a push. 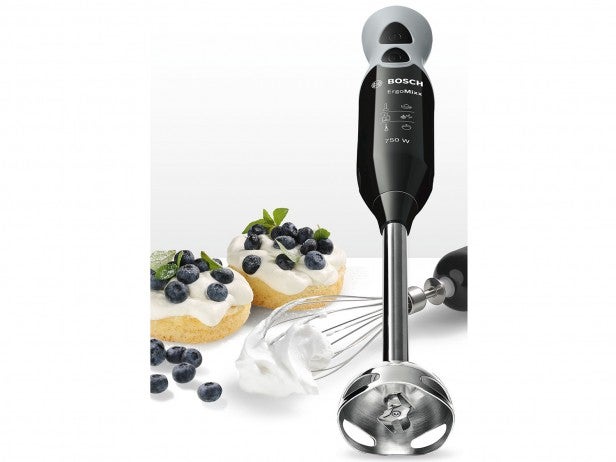 Above the Turbo is a large single button to activate the chosen speed – selected by a dial on the top of the appliance – and at the sides are the release buttons for detaching each tool. There’s a blending beaker to minimise splashes, and for dry food-processing there’s a Universal cutter with a removable double-blade.

The most notable thing about the Bosch Hand Blender is how easy it is to hold, thanks to an ergonomically shaped handle with a soft-touch, non-slip coating. Besides being relatively light, it’s also well balanced. We started our test by trying one of the provided recipes for crepe batter.

Placing milk, an egg, flour and melted butter into the beaker, we submerged the blender foot. The measurements on the side of beaker made pouring out the milk for this recipe easy.

We began on a low speed of 3 to initially combine the ingredients, before turning up to 5. There was some suction between the foot and the base of the beaker, but it wasn’t so strong as to lock to the bottom, and could be pulled away while still in use.

Floating the blade a few centimetres above the base of the beaker mostly prevented the suction. After a minute or two, the batter was smooth and of a consistent colour, and fried well.

Next, we swapped the blending foot for the gearbox and the balloon-whisk attachment. Adding an egg white to the beaker, we slowly turned the Hand Blender up to its maximum speed of 12. There was no need to stop and start while turning up the speed – it was possible to keep a finger on the power button and turn the dial on the top simultaneously. After three minutes, the egg white became firm, and when inverted, it remained in the beaker.

Moving onto the Universal cutter, we added a handful of ice cubes to the container and attached the gear lid, which twisted into place. The Hand Blender body then clipped into the top. For this, we used the Turbo button again, in pulse-like bursts to transform the cubes into snow. The container has a non-slip base, so didn’t move on the worktop while being used.

Once finished, the crushed ice was consistently processed and still frozen, without any distinguishable melting – ideal for cocktails.

We finished by using the Universal cutter to process carrots. Since the container is quite compact, there’s still a need to prep the vegetables beforehand so they fit inside.

Once chopped into manageable chunks, we used the Turbo button to process them in one smooth motion; this took about 15 seconds. The chunks of carrot were blitzed into consistently shredded pieces, with no lumps remaining. Topped with the lid, they kept fresh in the fridge for a couple of days.

All of the parts that come into close contact with food – the blending leg, containers, whisk and lids – were dishwasher safe, but the gearbox and Universal cutter gear lid need to be wiped down after use, making clean-up a case of remembering not to put everything in the dishwasher.

Should I buy the MSM67160GB Hand Blender?

The Hand Blender performs its functions well and its powerful performance is faultless. However, while it will take care of everyday jobs, it lacks useful extras, such as a mashing leg or good-sized jug. This limit its versatility to chopping, whipping and blending small quantities.

As a result, it’s perfect for blending soups in situ, making baby food or solo households – but bigger tasks may still call for a full-sized appliance.