Multicookers – machines that offer multiple methods of cooking, such as pressure-cooking, steaming, and so on – have been around for a few years, but the Bosch AutoCook MUC88B68GB ups the ante. Not content with combining fast and slow-cooking with a few other options, it comes with an array of settings, as diverse as frying and baking, making yoghurt and poaching eggs. Assuming you only wanted to make one thing at once, you could feasibly get rid of most of your cookware and your hob and let the Autocook handle the lot. Realistically, it’s a fantastic helper for families, and entertainers – thanks to its sous-vide option and induction technology for even heat distribution.

Rather than assume the shape of a traditional pressure cooker, the Bosch opts for a shorter, squatter design for the AutoCook MUC88B68GB. This allows it to accommodate a cauldron-like bowl from which food can be taken out easily. The bowl itself benefits from sturdy handles and is marked with cup and litre measurements. On top, there’s a lever that twists to lock the lid during pressure-cooking and a large button on the front of the machine to release it – which feels a bit redundant, if I’m honest. The AutoCook’s controls consist of nine buttons, which feels rather complex, even when multiple options are considered. There’s only one button for scrolling through the preset programmes, however, which means that if you miss the one you want, you have to start again.

There are also buttons controlling the short, medium or long version of that programme, temperature (in 5°C steps from 40ºC-160ºC), time and pressure. Its symbols aren’t obvious and it’s easy to forget what each does. For example, a clock image controls the delay start while a timer controls cooking duration. 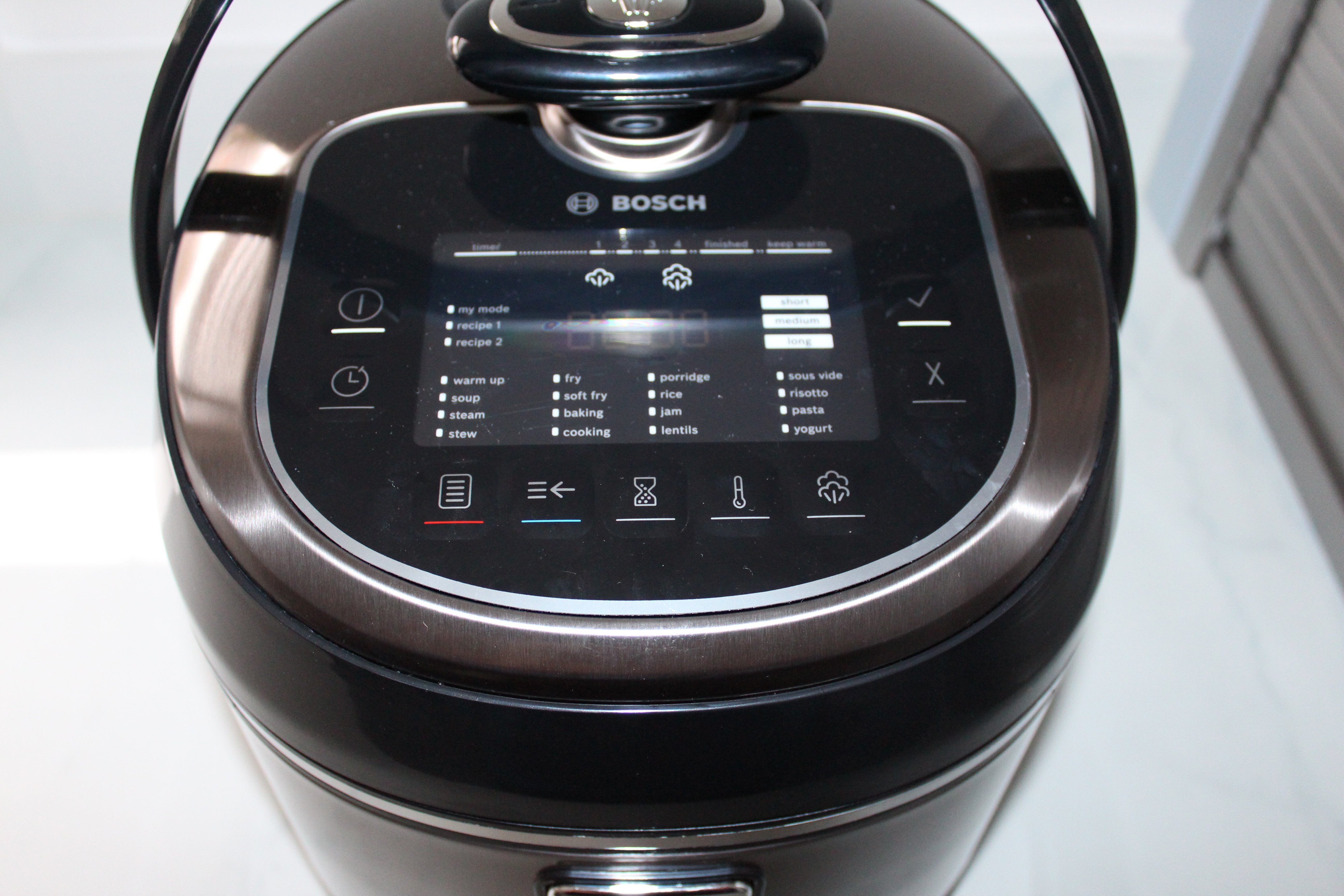 The more complex the cooker, the greater the need for a quick start guide. Unfortunately, the AutoCook doesn’t provide one. Fortunately, the recipe book proved to be more hands-on than the instructions.

I started with a chilli con carne recipe using the stew programme. The first phase was searing meat and vegetables on a 160ºC, 30-minute setting. The AutoCook MUC88B68GB heated up fast and browned the meat quickly; the capacious pot was especially handy when cooking 1kg of meat. The tools supplied with the machine were too short to assist well with stirring this capacity, however. And since the frying required the lid to be up, it wasn’t possible to keep an eye on how much time was left. 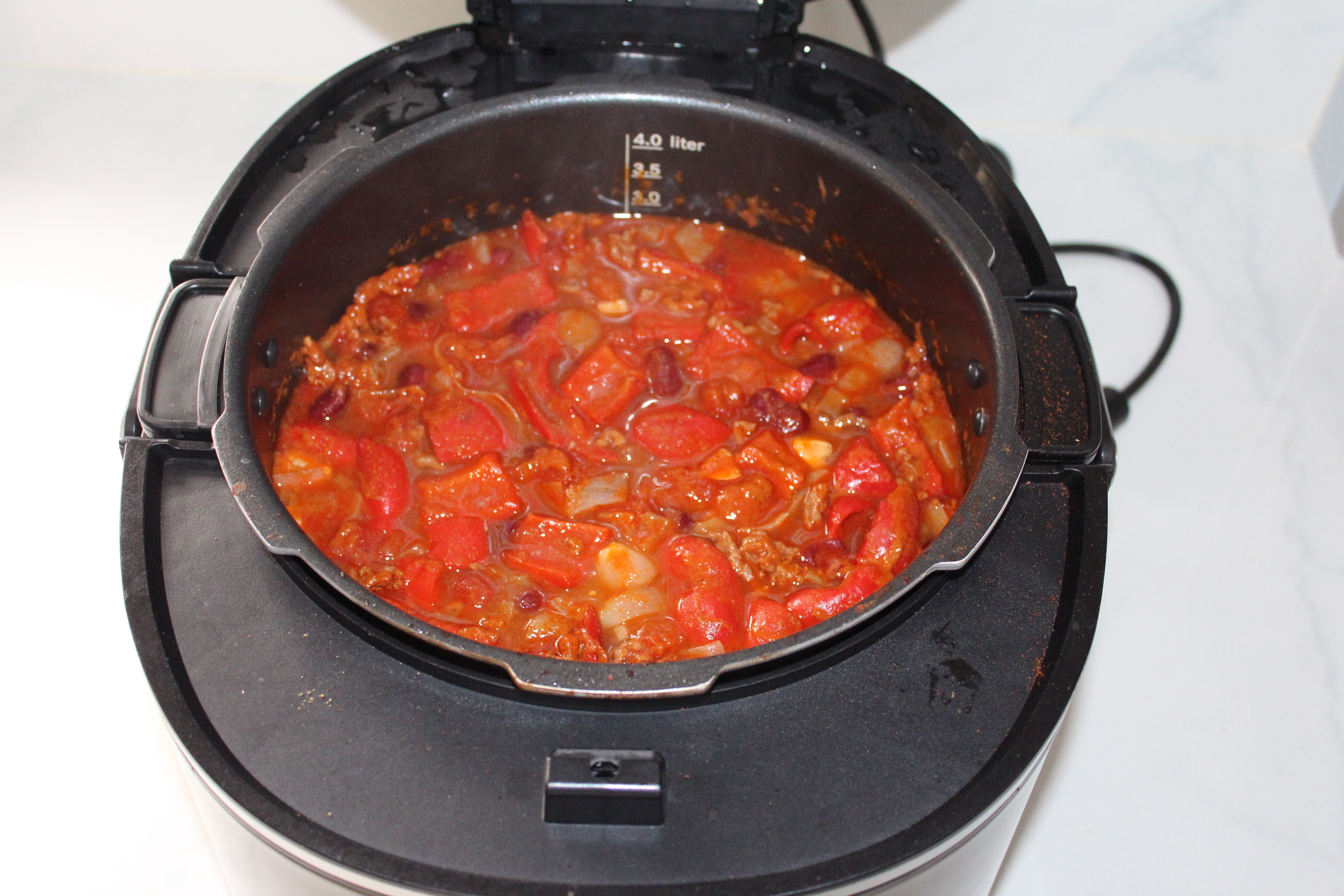 Thirty minutes proved to be too long – the contents began to dry out – so I tried to reduce the countdown or terminate the first step and move onto the next one. Unfortunately, hitting the cancel button brought the whole programme to a halt, with no option to restart. I found this apparent lack of flexibility frustrating, and had to set the next part of the process manually; I cooked the chilli on a pressure setting for 36 minutes.

I later discovered a method of cancelling a step, but this was in no way obvious from the controls.

The recipe included the prep and cooking time, but using pressure-cooking added time for the pressure to build up first. Also, one this was complete, it was a further five minutes for the lid to be released. The finished chilli was well cooked, with moist meat and a rich flavour.

Next, I made vegetable soup using the medium soup programme. This involved sautéing vegetables, first with the lid on then with it open, adding stock and then cooking under pressure. The finished soup was quite watery; the machine seems to be missing a simmer programme to reduce excess liquid. However, all the vegetables were sufficiently cooked. I then used the AutoCook to slow-cook eggs in their shells. Filling the bowl with water, I set it to the medium sous-vide programme and heated the water for an hour with the lid closed. Adding the steamer insert and eggs, I closed the lid and left it cooking for another hour. After this time had elapsed, I cracked the eggs open. The whites were watery, but the yolk was softly cooked. This felt like a drawn-out process, but might be useful for poaching ahead of time. 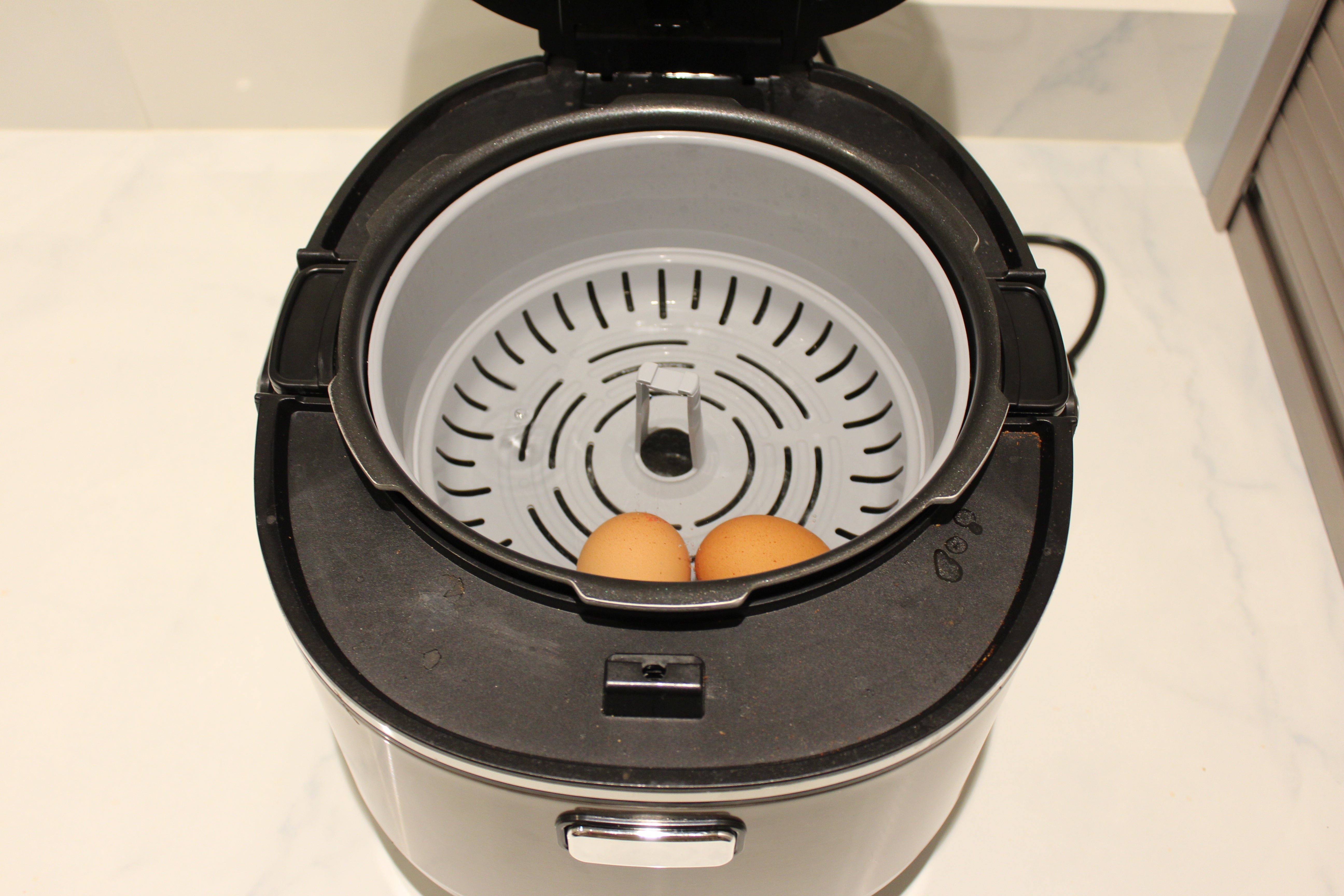 I finished by making yoghurt on the short yoghurt programme. This involved heating milk to 40ºC with the lid open, which took about 10 minutes, and combining it with a small amount of yoghurt. I then closed the lid and set it cooking for eight hours. This produced a creamy, semi-set yoghurt that was delicious. Although the downside was the programme duration and the requirement to be there to immediately remove the yoghurt for cooling. 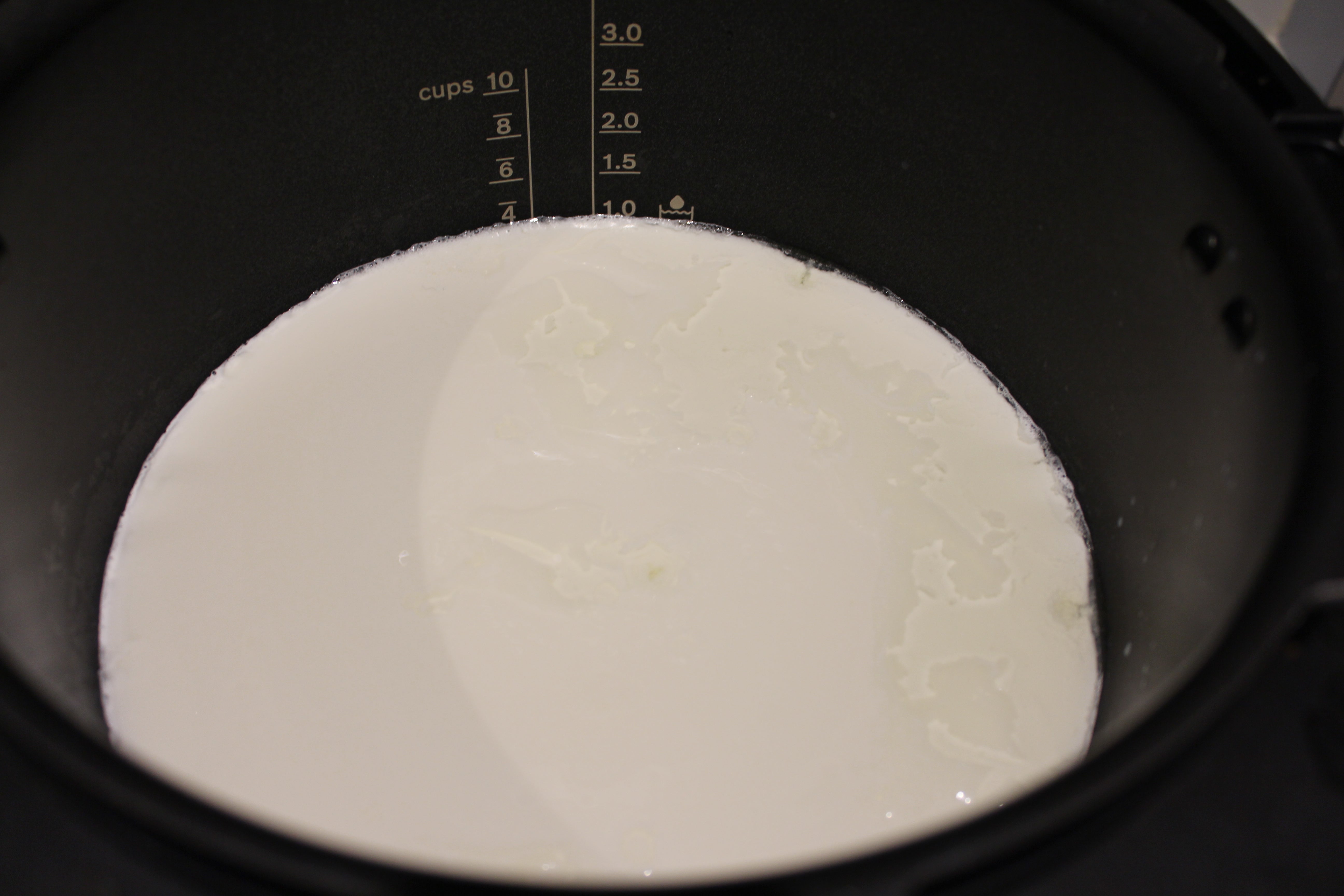 While parts of the lid required hand-washing, the bowl and accessories are all dishwasher-safe. This made clean-up convenient and quick.

In terms of features and cooking functions, the AutoCook is superior to many multi-cookers. However, somewhere along the line, ease of control has become neglected. It isn’t as straightforward to programme as similar machines, and more complex recipes would benefit from a pause button.

If you’re prepared for a bit of trial and error while you familiarise yourself with it, however, the AutoCook comes with big rewards: tasty hot meals to return home to. This makes it the ideal buy for any busy household.

The AutoCook has the potential to be your go-to kitchen gadget – but keep the instructions to hand.