We found it became our default vacuum cleaner for quick clean-ups and even major spring cleans around the office during the time we had it. For smaller homes with an Athlet, we'd struggle to think why you would need upright mains cleaner at all!

What is the Bosch Athlet BCH625KTGB?

The Athlet is Bosch’s first serious cordless upright vacuum cleaner, and it promises to replace corded models in all but the largest of homes. Powered by a durable 25v lithium-ion battery, the Athlet delivers high suction power and plenty of run time to whiz around several rooms on a single charge.

Charging is by a wall-socket adapter with a flying lead that plugs into the cleaner just below the handle. Bright blue LED segments illuminate to indicate the state of the charge. It has three power levels, so you can balance suction power against run time. On the lowest power setting Bosch claims up to one hour’s cleaning.

The cordless design and compact sizes make the Athlet extremely versatile and easy to move around, particularly as it weighs in at a featherweight 3.3kg with the floor head attached. Remove the floor head and you can attach a clip-on hose and a selection of tools for reaching more inaccessible places while you carry the main unit on a shoulder strap. The bagless design has a dust bin with a compact 0.9-litre capacity and a warning light to indicate when the washable filter needs a clean. 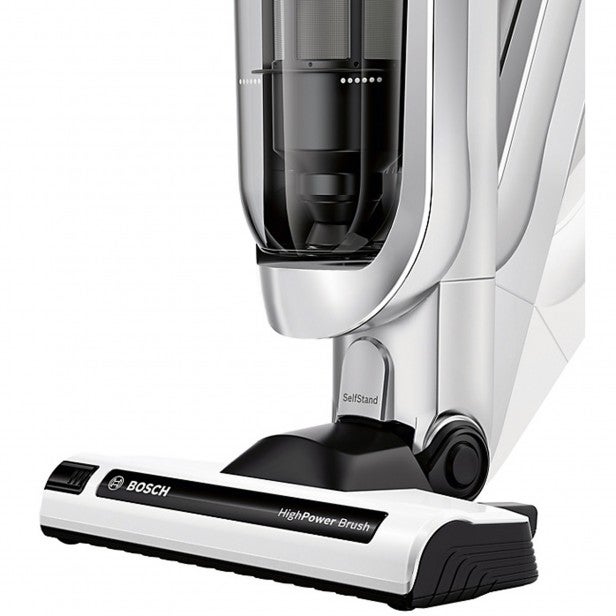 Being a rechargeable cordless model, the most important accessory is the charger itself. We weren’t overly impressed with this, as it’s a simple ‘wall-wart’ plug-in adapter with a slightly fiddly jack plug. It’s not particularly tidy when charging and, unless you unplug the charger from the wall while cleaning, you have trailing cable just waiting to be sucked up. The option of a charging dock would have made the concept a whole lot neater.

Attaching the flexible hose requires removing the main floor head by firmly pressing a robust plastic clip and lifting the main unit away from the head. It’s a three-handed job, so we had to place a foot on the head.

As mentioned, you get a shoulder strap for carrying the cleaner around, with the end of the hose and the upholstery and crevice nozzles within easy reach. This portable nature means the hose is very short, but with the superlight weight and no mains cable to trip over, the Athlet is excellent at reaching places other cleaners struggle to reach.

Bosch Athlet BCH625KTGB: How does it clean carpets and hard floors?

If you’ve ever tried an old-style cordless vacuum cleaner, prepare for a surprise with the Athlet. Even from the sound of the motor on full power, you can tell this is a cleaner that means business, and the suction power through the floor head is enough to generate quite a bit of ground suction. This means a firm hand is required to push and pull the cleaner around on full power.

Of course, you can nudge down the power to level 2 to make moving the Athlet around even easier, albeit at the expense of cleaning power. On level 1, the electric brush bar in the main head is switched off, making it ideal for hard floors.

On full power the Athlet performed admirably in open areas of carpet, comparing very well with lower-powered corded models. Its light weight and manoeuvrability encourage you to repeat any areas that weren’t cleaned on the first sweep, while its cordless power is a blessing for anyone who’s ever become entangled in a vacuum cleaner cable.

On hard floors this Bosch is very easy to move around, particularly as the floor head can pivot forwards and backwards as well as side to side. While most hard-floor cleaning is a simple task for vacuum cleaners, we’d have preferred the option to use a higher power setting and switch the brush bar off manually.

Used on level 3 (labelled ‘Turbo’) on mixed-pile carpets, the Athlet ran consistently at full power without fading or reducing power for just over 12 minutes. At this time it stopped completely, indicating it needed a recharge. We had to empty the container mid-way and several rooms got vacuumed twice before the machine stopped working. This is a great result, as you can get a lot of cleaning done in 12 minutes. If you’re prepared to do a lighter clean on Level two power, you can nip round all but the largest of houses on a single charge.

Charging itself takes around three hours from flat, and the charger draws less than 16W during this time – we measured 0.056kWh/charge. The charger automatically shuts down when the cleaner is fully juiced up, meaning it can be left plugged in and switched on without wasting electricity between uses.

The Athlet was fairly quiet in use, too. When vacuuming carpet in a fully carpeted bedroom, it measured just 75dB at ear height above the cleaner, or about the same as most people have their kitchen radios or TVs. That’s quieter than the majority of traditional mains-powered vacuums we’ve tested, apart from the models that are designed to be ultra-quiet. 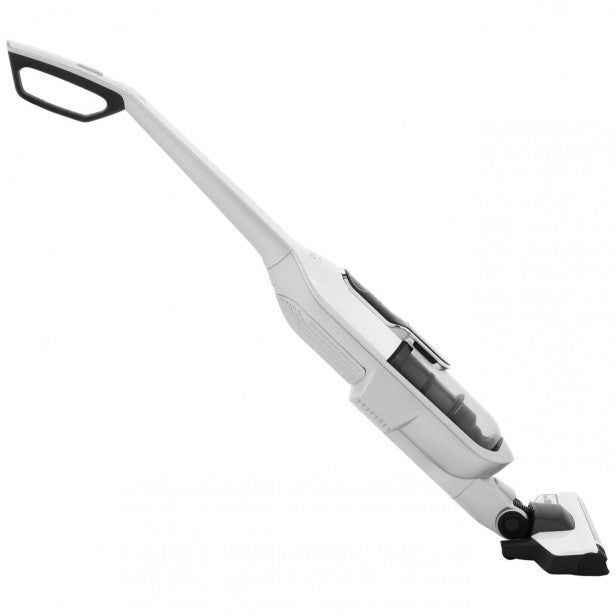 Bosch Athlet BCH625KTGB: How easy is it to use on stairs?

For the stronger user, the Athlet’s easy-to-handle 3.3kg weight with the main floor head attached actually means you can carry it up the stairs, cleaning each step as you go. Practically, though, the idea with this is that you swap the floor head for the hose, attach the strap, sling the cleaner over your shoulder and use the hose tools provided. That’s not as simple as it sounds, however, as the push-clip to detach the head (and latterly the hose) requires a very firm push whilst trying to pull two sections apart at the same time.

Once the hose is attached, we also had difficulty with the strap. There are pieces of Velcro at the end and a diagram to say this wraps around the handle, but the Velcro is simply in the wrong place and doesn’t secure to itself if it’s wrapped around the handle. There may be a way of achieving this that we’re yet to fathom, but neither the manual, the diagram nor Bosch’s website shed much light on the subject.

Simply tying the strap on was fine for our test, and the Bosch worked as described – assuming you’re comfortable with having a machine over your shoulder. The main hose tool was OK for stair cleaning, although, as ever, tools without a rotating brush are always going to have limited efficiency on carpeted stairs. Care must also be taken when putting the vacuum cleaner down in this mode, as there’s no obvious way to place it on the floor. It would be easy to put it down ‘end-first’, crushing the hose.

Bosch Athlet BCH625KTGB: How does it cope with pet hair?

The Athlet had rather mixed performance with pet hair from our willing assistants, Poppy (Labrador) and Willow (Collie).

In upright mode with the main floor head it coped admirably well. On full power it cleaned the test carpet area, with its well-rubbed-in pet hair, to pristine clean in around 18 seconds.

The Athlet’s limiting factor with pets is not so much the collecting performance, but the small 0.9-litre bin. This will fill quickly if your pets are having a spring moult. Handily, the Athlet’s brush bars can be removed from the side of the head, allowing easy detangling and removal of hairs caught around the bar.

In portable/handheld mode the Athlet struggled with pet hairs. The lower suction power than a full-size electric corded vacuum, plus the lack of a turbo brush head on the hose tool, conspire to make it very difficult to pick up dogs hair that are embedded into carpet.

However, the ability to use full power even on hard floors when in this mode meant collecting loose pet hair and cleaning hard floors was relatively easy.

Should I buy the Bosch Athlet BCH625KTGB?

That depends. The Athlet is inspired in some areas but falls down in others, so it will very much depend on how you intend to use it. If you like cylinder cleaner ‘hose and tool’ versatility or handheld vacuum convenience, the Athlet isn’t at its best. It’s tricky to convert to this mode, the carry strap could be better designed and I can see many people put off by the thought of a vacuum cleaner hanging off their shoulder.

However, its performance as a lightweight, powerful and highly manoeuvrable upright cleaner is excellent. We found it became our default vacuum cleaner for quick clean-ups and even major spring cleans around the office during the time we had it. For smaller homes with an Athlet, we’d struggle to think why you would need upright mains cleaner at all!