What is the BosCam R1?

The BosCam R1 is yet another dashboard camera from China. On the one hand, the story is similar to others that have arrived on our testing desk: it is excellent value and can be purchased from Amazon. What sets it apart is that it attaches to your rear-view mirror, replacing it, and it also includes a rear camera – all for well under £100.

The sheer value makes the BosCam R1 an exciting dash cam, but the poor video quality may be enough to put you off.

Unfortunately, since the BosCam website is entirely in Chinese, it’s hard to find technical details about the R1. There’s no information about what kind of sensor it uses. But there is at least a detailed paper manual in the box, in English and German. This leads you through the process of installation and the menu features. 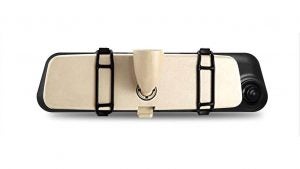 The main unit doesn’t come with its own mount, because you’re meant to strap it onto your existing rear-view mirror. The effectiveness of this process will depend on the size and shape of your mirror. If you have one that’s chubbier than usual, it might be difficult to clip the R1 over it with the standard rubber straps provided. Fortunately, extra-stretchy straps are also included.

The R1’s camera sticks out on the back at one end. But the R1 is much wider than the average rear-view mirror, so should fit snugly over most mirrors with plenty of room for the camera on the left-hand side. The camera lens is installed in a kind of stiff ball joint, so you can adjust it to point in the right direction. 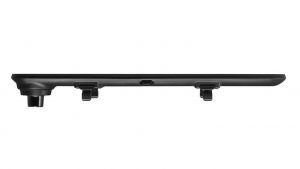 A regular cigarette lighter power cable is supplied for the main R1 unit. This is the usual lengthy bit of wire, but the adapter is permanently attached and has no extra USB port. As such, you won’t be able to use this at the same time as a satnav or charge your phone simultaneously. There aren’t any clips for routing the cable included, either.

Things get a bit more complicated with the rear camera, too. This isn’t a rear-facing dash cam but a reversing camera. As a result, installation is more involved, particularly since it’s meant to be located externally just above your rear number plate.

The instructions talk about two different methods for mounting, but there was only one mount included in the box that I was sent. 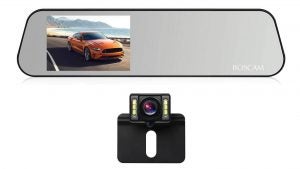 Mounting involves either sticking the camera to your car behind the number plate, or to the number plate itself. You then have to route the cable through into the trunk of your car, attaching the bare red wire to your reversing light bulb’s positive voltage wiring, and then the black wire to ground.

Next, the data portion of the cable will need to be further routed into the passenger area of the car, and then round the inside of the roof until it reaches the main unit, where it plugs into the R1 via a micro-jack. At this point, you may have considered selling your current car and getting one that already has a reversing camera.

Video is recorded to microSD card (not included in the box), and the top data rate amounts to 16Mbps, which is fairly miserly considering the tp[ 2304 x 1296 resolution. This means that a 16GB card will be enough for 133 minutes of footage before looping occurs, where the oldest files are replaced by the new ones. 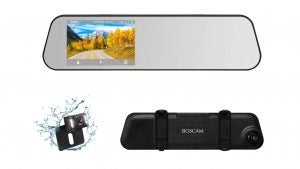 You can also take photos up to 14-megapixels, although I really can’t see people using the main R1 unit as a stills image camera. Not only is it fiddly to get it off and onto your rear-view mirror, you will also look even sillier than people who use iPads to take their holiday snaps.

The rear-view camera isn’t primarily a rear dash cam, however. Instead, it senses when you’re reversing, and the image displays in your rear-view mirror. The resolution is 720 x 576, but more importantly, it has a 0 lux rating, because it has six little LED lights around the lens that will provide illumination when needed, so you can always see what’s behind you.

The R1 incorporates a relatively large 4.5-inch LCD, which takes up slightly less than half of the left-hand side of the mirror. This is a touchscreen, making it quite easy to operate, although you’ll also soon have fingerprints all over that side of the mirror and will probably want to clean it regularly.

After timeout, the display activates again as soon as you touch the screen side of the mirror. You can then select the menu via the icon at the bottom right. You can enable motion detection mode, which enables recording when something moves in front of the camera. 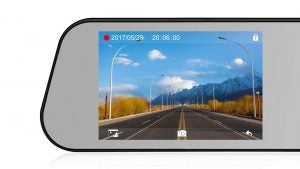 If you drill down to the settings, you can change resolution, movie quality, looping time from one to three minutes, and how long to record after you turn off the car, with options from 10 seconds to a minute. If you switch to the Still Capture menu, you can select image size and quality, but also exposure between -2 and +2 EV in 13 steps. You can also choose ISO 100, 200 or 400.

Under General Settings you can perform tasks such as configuring the clock and choose what information to imprint on the video. This is also where you can enable parking monitoring, with three levels of sensitivity.

That’s your lot for the usual advanced dash cam features, however. There’s no built-in GPS, so your location isn’t recorded, and you don’t get lane departure warning or collision detection either. 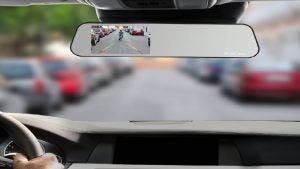 There is a G-sensor to mark incidents automatically, but the only novel feature is the rear-view camera. After the involved installation process described above, it was a relief to see that this camera did actually work. As soon as you select reverse and your rear light goes on, the camera activates and takes over the LCD panel on the R1.

There are virtual markings on the display to show how close you are to objects behind you, like the built-in systems. It works very well and is handy if your car has poor visibility of nearby objects at the rear.

The BosCam R1’s image quality is a bit of a mixed bag. In theory, it benefits from recording at a resolution beyond Full HD. But the data rate would be slightly aggressive for Full HD, and the BosCam R1’s Super HD has 44% more pixels than Full HD.

The end result is footage that’s fuzzier than it should be. This makes it hard to make out number-plate text, which is a crucial function for a dash cam.

There are also some problems with exposure, particularly in bright conditions that have high contrast. The R1 tends to underexpose the important parts of the frame (the road and cars) to compensate for a bright sky, which isn’t terribly useful.

Overall, this isn’t the worst dash cam footage I’ve seen, thanks to the high resolution. But it’s also far from the best, and below average for dash cams shooting at Full HD or above.

The BosCam R1 is super-cheap considering it includes a reversing camera in the bundle. This appears to do its job as advertised, and having the reversing view on your rear-view mirror works well.

However, dash cam image quality is below par for the resolution. This isn’t a complete deal breaker considering the price, but it does tarnish what would otherwise be a bargain.

The BosCam R1 is amazing value for a dash cam that includes a reversing camera, but overall image quality is disappointing.