Available on PS4 and Xbox One (reviewed)

No self-respecting gamer could ever resist the prospect of buying two games for the price of one, and that holds especially true when those games happen to be the most recent iterations of the much-loved first-person shooter-cum-RPG Borderlands. So nobody would argue that Borderlands: The Handsome Collection — which consists of upscaled next-gen versions of Borderlands: The Pre-Sequel and Borderlands 2, plus every single item of downloadable content for both games – offers anything other than extraordinarily good value for money.

It turns out, though, that there’s a catch. Well, perhaps the word “catch” is a bit strong, but at the very least, The Handsome Collection has one glaringly unsatisfactory element. Somewhere in its development, the process of porting Borderlands: The Pre-Sequel from the PC, via the PS3 and Xbox 360, to the PS4 and Xbox One has gone awry, and frame-rate issues have crept in. Which are all the more conspicuous in a game which has so much happening on-screen at any given time. At least publisher 2K Games and developer Gearbox are aware of the issues, and have said they are working to alleviate them with a patch. But we won’t be holding our breath.

And while the occasional periods of slow-down represent an annoyance,
they don’t necessarily leach away a significant amount of the sheer
gaming enjoyment that these two chunks of over-the-top, cel-shaded
mayhem and anarchy offer. 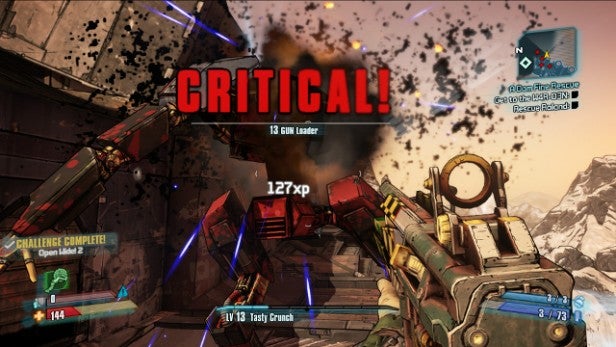 For the uninitiated, Borderlands is pretty much Mad Max re-enacted on alien worlds, combining the action of a gloriously fettled first-person shooter with the storyline and character-advancement of a top-notch open-world RPG. With a generous dollop of real humour (as opposed to the US college frat-boy style of humour which so often pollutes games) on top.

One hitherto unavailable pleasure that the Handsome Collection brings as a package is the ability to play the two games in the order that nature intended: The Pre-Sequel’s events take place before those of Borderlands 2, but the latter came out in 2012 and the former last year. The Pre-Sequel tells the story of how Handsome Jack, who looms large as an all-powerful figure in Borderlands 2, emerged from frankly pathetic origins. And it really does have a massive Mad Max flavour to it, as it was developed primarily by 2K Australia: Aussie accents and humour abound, making a refreshing change from the games industry’s all-pervasive Americanism. 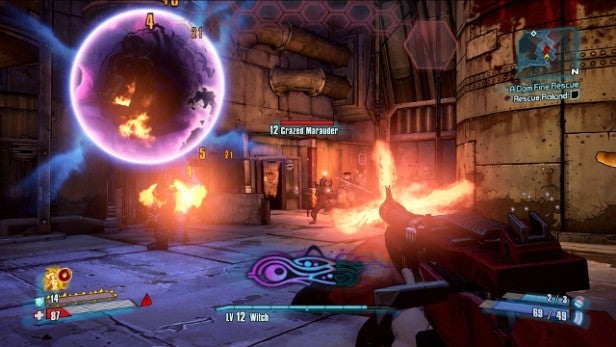 Borderlands games have always been great to play co-operatively, and the Handsome Collection adds another much-requested feature: four-player split-screen co-op. But frankly, while you could envisage a bit of four-player split-screen action providing much mirth during, say, a post-pub session, it isn’t really the best way to play the game. There’s quite enough going on, at any given moment in any given Borderlands game, to occupy a whole screen, and when you home into an even tighter viewpoint, confusion inevitably reigns. It does provide quite the visual spectacular, though.

2K Australia got a bit of stick for refusing to deviate an iota from the Borderlands 2 gameplay template, which we felt was somewhat churlish, given how incredibly satisfying its gameplay is. That’s something that Bungie clearly realised: playing through the Handsome Collection emphasises the similarity between Destiny’s gameplay and that of the much older Borderlands. Both Handsome Collection games feature fabulous weaponry (including the most outrageously powerful handguns ever seen in any game) and the same mechanism as Destiny, in which you’re shown the damage caused by every hit – every time the legend “Critical Hit” flashes up, it makes you feel like a hero. Loot, too, looms large in both franchises. Borderlands’ vehicles conspicuously have the edge over Destiny’s – although they mostly have a similar control system to Halo’s Warthogs, they are much more controllable. And you’d have to say that Borderlands’ bosses have vastly more personality (and require much more head-scratching before you can take them down) than the limp bullet-sponges found in Destiny. 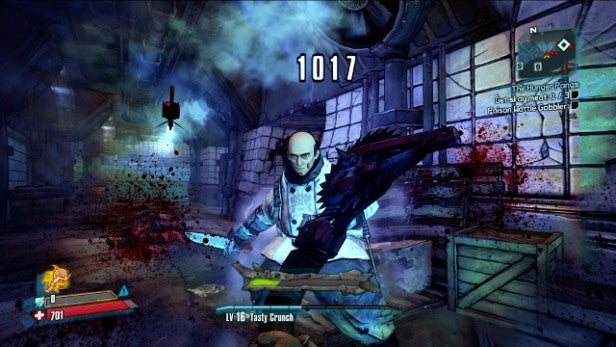 Happily, the next-gen version of Borderlands 2 is unafflicted by frame-rate issues – indeed, it looks superb, at least within the constraints imposed by its comic book-influenced art style. While that dictates that every object in the game-world has to have a black line around it, there are still some neat visual touches to be found, such as startlingly realistic-looking virtual snowflakes falling on the screen, or convincing water and ice. Borderlands 2 won a hatful of awards when it first came out, and the version of it found in the Handsome Collection is absolutely definitive – what was already an extremely meaty game has been augmented by an absolutely vast array of DLC.

It’s also possible to import games you have saved on previous platforms to the Handsome Collection, within reason: Xbox 360 saves can be played on the Xbox One, and PS3 saves on the PS4. The presence of all the DLC offers a certain amount of justification for those who have already played one or both games on previous-gen hardware, but it remains a moot point whether or not the Handsome Collection qualifies as an essential purchase – The Pre-Sequel’s frame-rate issues will inevitably lead to some disappointment. However, if you played the Pre-Sequel but not Borderlands 2, The Handsome Collection is pretty much worth buying for the latter alone – it’s an even better-looking and more fleshed out version of one of the mightiest games ever.

Verdict
If you somehow missed out on the Borderlands games in their original configurations, then the Handsome Collection is the proverbial no-brainer. It offers the very essence of pure gaming pleasure (as long, that is, as shooting outlandish comic-book characters in the face is something that floats your boat). And not just as a short, sharp burst – thanks to all that DLC, it should keep you occupied for months on end. Combine that extreme meatiness with gameplay that is never anything less than irresistibly addictive, and you’ve got a recipe for waving goodbye to your social life. You have been warned.