Back in the glory years of the SNES, Bomberman was the Counter-Strike or Halo 2 of the day. With TV appearances on GamesMaster, the little bomb-chucking chaps ran in the same circles as Sonic and Mario, and made waves in the tabloids years before Hot Coffee. Lately, however, he’s fallen on hard times. He’s had the odd release, but nothing you’d call a huge hit, and been forced to try other avenues such as karting or hardball in order to bring in the bacon. Still, perhaps the world isn’t tired of Bomberman. Perhaps he was just waiting for the right comeback vehicle. 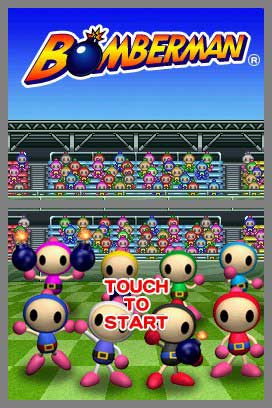 He’s found it. Bomberman DS is everything Bomberman should be – frantic, furious fun – with a fistful of innovations that actually improve the game. If there’s any justice in the world, it will be a summer holiday sleeper hit.


Admittedly, it’s not going to win much credit with anyone who plays it on their own. There is a one-player game, in which Bomberman travels through a series of levels, first uncovering a special gate block then exploding all the monsters to open it. Every now and then he faces a more difficult boss creature. The best that can be said is that it’s mildly diverting and makes a good introduction to the principles of the game and some of the new mechanics introduced by this version. It might keep you busy on a boring journey, but this won’t be a love affair that lasts. If you have some friends with DSs, however, it’s safe to say the same does not apply. Now some of you may be unfamiliar with the Bomberman basics, but it’s all quite simple. The game takes place in a hall filled with columns and blocks. You play a little man who’s main skills are a) dropping bombs and b) running away. Initially, your bombs blow up one block to the top, left, bottom and right, but by blowing up the blocks you uncover upgrades that allow you to drop more than one bomb at a time and increase the effect of the explosion. By destroying the blocks, you can also open up routes to other areas of the hall, where rival little men will be doing exactly the same thing. Your job is then to blow these little men up before they do the same to you.

It’s easy, but Bomberman has always been a game of tactics as much as reaction. Anyone with a modicum of sense can sidestep a bomb, but the trick is to force the other players into corners or hope they get flustered enough to make a big mistake. Even in it’s most primitive form it works brilliantly. The brilliance with the DS reworking is that they’ve added to the recipe without doing anything to spoil the taste. 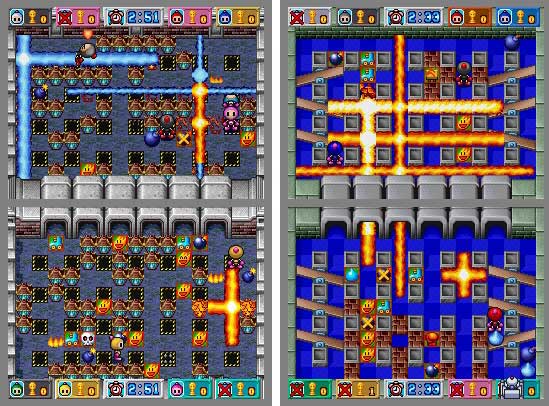 In fact, there’s been a stupid amount of smart thinking going on. First – and this is one reason why the DS is a perfect vehicle – it’s ludicrously easy to set up a game across the wireless link. Secondly, while a cheap-minded publisher would have forced every player to have their own copy, or only make a portion of the content available to download across the connection, Bomberman DS lets you support eight-player matches with every available option from the one cartridge. Switch on, set up a game, and anyone with a DS in range can join in. If your numbers are limited, don’t worry. You can always add the game’s fiendish bots into the mix.


A second touch of brilliance: Bomberman DS uses the touchscreen and the microphone to expand the game’s horizons. Most multiplayer games are played across both screens, with the two areas connected by tunnels. Even better, death is no longer the end; in most game modes, it merely puts the player at the bottom of the screen, from where he can use the touchscreen to lob bombs into the arena. This means you can’t win, but you can help decide who does, or even force a draw. Ah, sweet revenge! 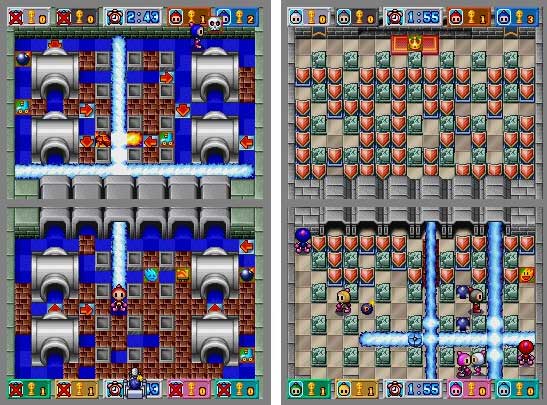 The microphone, meanwhile, allows for three new variants. In one, you can use a voice command to set the bombs, and in another you use it to raise a shield. The one you’ll all end up playing, however, is the one in which you say ‘kaboom’ to detonate. In fact, you don’t even have to say ‘kaboom’ – a wide variety of choice expletives will work every bit as well! Needless to say, it’s all a bit juvenile, but it makes Bomberman the sort of game that causes plenty of after-pub hilarity, yet is still safe to play with a bunch of six-year olds once your hangover subsides.

And these are only three of thirty different modes, running the gamut from your basic, classic Bomberman to a capture the crown variant that has you all racing for the aforementioned royal headgear. There are maps with see-saws that propel the bombs across the level, springboards that send you from screen to screen, conveyer belts to transport bombs across to unsuspecting players, or spikes that pop up from the floor. And I haven’t even gone into the vast array of power-ups available. There are remote detonation bombs, power-ups that let you kick unexploded bombs towards other players, and alternative bombs with even more varied or violent effects. It’s a scream. 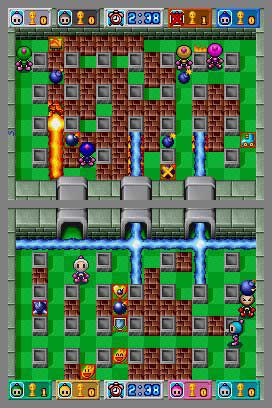 Of course, it all looks pretty dated, the sound is mainly functional, and the music is staggeringly annoying. There’s certainly nothing here that really pushes your DS to its limit. But in the end, isn’t this what Nintendo’s little beauty is about: take classic gameplay, add a mass of innovative features, then let players get together and have some fun? If so, Bomberman DS works very well. It’s no immediate, rush-out-and-buy-it masterpiece, and – let’s not forget – the single-player version kind-of sucks, but it’s going to give some people a lot of solid entertainment this summer, cause more than the odd moment of hilarity, and probably the odd childish squabble to boot. And who can say fairer than that?


Another aging star gets the DS treatment, but this time the changes and extras make the most of the machine. If you have friends and they have DSs, then consider Bomberman DS your essential summer holiday treat.