If you buy a B&O TV you can be sure of two things: first, you’re a lot better off than the rest of us. Second, your hefty dollop of cash is getting you way more than just a TV. For B&O TVs tend to be more works of art and labours of love than humble goggleboxes – and the company’s new BeoVision 7-40 40in LCD TV is no different. With knobs on.


In fact, look under either ‘sumptuous’ or ‘opulent’ in your dictionary and we wouldn’t be surprised if you find a picture of the BeoVision 7-40 staring out at you. Everything about it oozes quality, from its glass-finished, high-gloss black screen frame through to its anodised aluminium outer trim – and you can feel the quality as well as see it. 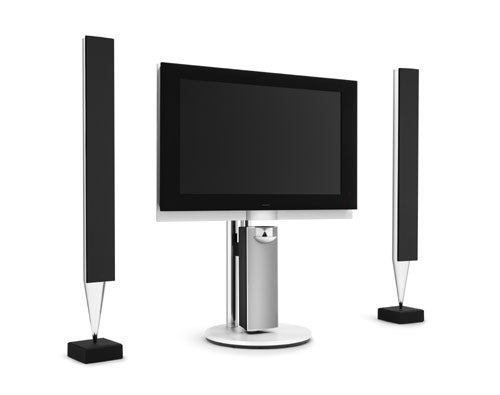 That’s just the TV, too. Add in the stand options (especially the £425 extra ‘pole’ floorstanding one); the fact that the silver bits can be had instead in black, dark grey, red, blue or even a bespoke colour; and the extraordinary external speaker ‘bar’ positioned under the screen, and you’ll probably be thinking you’ve died and gone to TV heaven.


The speaker bar needs a little more attention, as it comes in two very different flavours. The one most people will probably get is the ‘7-2’ – a three-way stereo speaker. But there’s also a ‘7-4’ mono option designed for people wanting a centre speaker as part of a B&O surround sound speaker package.


If you’ve studied the pictures of the BeoVision 7-40 closely, you may have noticed a sexy little bulge under the centre of the screen. This isn’t just there for aesthetic reasons. For if you run your fingers underneath it a rather amazing thing happens: without so much as a whisper a built-in disc tray slides down, round and out of the bulge, ready to take a DVD or CD of your choice. There’s even a light built into the tray to help you see what you’re doing in a darkened room, for heaven’s sake. If there’s a cooler trick in the TV world right now, we ain’t seen it.

Although you won’t personally have to have much to do with them since a B&O installer will sort them out for you, the 7-40’s connections are adequate. This means they include the HD Ready necessities of a DVI input and component video jacks. Plus there’s a D-Sub jack for computer use, and three SCARTs all of which, excellently, can take our beloved RGB signals. A second digital jack might have been nice on such a costly TV, but then it’s not as if this B&O hasn’t been busy justifying its cost elsewhere.


That, we think, finally covers everything about the outside of the TV. Heading inwards we find a prodigious feature count, headed up by the fact that as well as DVDs and CDs the built-in disc drive will play DivX files, MP3 files, JPEGs, and Video CDs. 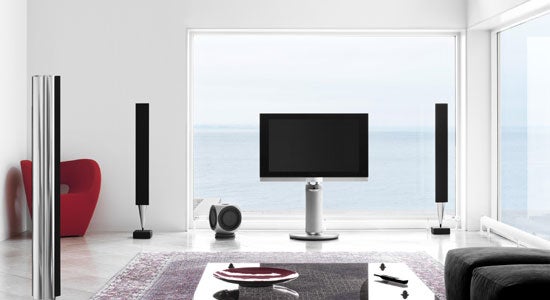 In time-honoured B&O tradition, you can rotate and even tilt the TV hydraulically on its stands, even setting your own ‘on’ and ‘off’ angles for the TV to automatically turn to when you power it up or down. The set also lets you control a Sky digital receiver via its wonderfully designed, outrageously well-built ‘Beo4’ remote control, and it can be built into a whole-home B&O installation system via B&O’s BeoLink functionality.


There’s also plenty of image flexibility on offer, while the screen’s specifications come in at a native resolution of 1,366 x 768, claimed brightness of 500cd/m2 and claimed contrast ratio of 800:1. These specifications are decent, though we have to say the 800:1 contrast ratio isn’t as outstanding as we might have hoped. Oh well – maybe it will just turn out that B&O has been more truthful in its contrast measuring techniques than some of its more ‘extravagant’ rivals.


The only really disappointing thing about the BeoVision 7-40 on the features front is its lack of a digital tuner. But given the inter-country differences between digital TV platforms, it’s perhaps hardly surprising that a company like B&O doesn’t have the resources to make different digital versions of the TV for each separate territory.

In action the BeoVision 7-40 is for the most part impressive. Particularly striking is how rich the picture is in terms of colours and fine details. Regarding colours, saturations are frequently spectacularly full on, yet they’re achieved without sacrificing the sort of deft colour blending that ensures objects look solid and three-dimensional.


As for details, while many of the LCD TVs we’ve looked at in our pre-World Cup TV feast have looked sharp, few have looked quite so magnificently textured and clear as the BeoVision 7-40. High definition thus generally looks first rate, but even standard definition pictures are by no means the mushy horror shows witnessed elsewhere.


We also found ourselves more satisfied by the TV’s black levels than anticipated from the 800:1 contrast claims. Certainly the picture gets dark enough in black corners to give low-lit scenes plenty of punch and depth. 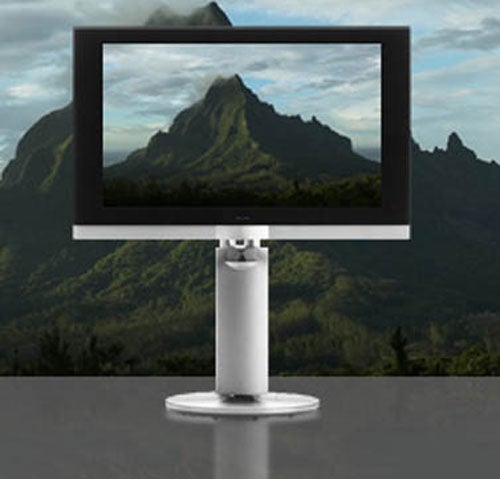 If you were hoping for televisual perfection for your seven and a half grand, though, you’re in for a disappointment. Problem number one is that even though black levels are deep, they’re also slightly bluish in tone, sometimes distractingly so. Next, although moving objects look reasonably free of smearing and go about their business very smoothly, there’s often some definite shimmering noise around their edges that can make action-packed scenes look a touch messy.


Finally, although colours are vibrant and subtle, they also suffer some slightly unnatural tones from time to time, particularly during darker scenes.


While the BeoVision 7-40’s pictures might not be quite as perfect as we’d like for our money, its sound certainly is. The stereo 7-2 speaker bar we used is so powerful and accomplished that it puts many high-end hi-fi systems to shame. In fact, we have no hesitation in saying that its sound is the best we’ve ever heard from a TV, flat or otherwise. And you can’t say fairer than that.


The BeoVision 7-40 is a stunningly engineered, utterly desirable objet d’art that frankly makes every other TV design look and feel ordinary. Add to this a very good all-round performance standard and the built-in DVD/CD functionality and you’ve got possibly the ultimate aspirational TV. It’s just a shame that with a price tag as high as £7,500, aspiring is probably all most of us will ever be able to do!