Thinking of buying a Bluetooth headset but can’t decide between a standard mono one or a snazzier stereo version so you can also listen to music from your phone? Well, thanks to this clever headset from Bluetrek you no longer have to make that decision. As its name suggests the Bluetooth Duo can be used either as a standalone mono in-ear headset or can be quickly converted into a pair of wireless stereo headphones complete with built-in support for SRS WoW HD pseudo surround sound. So the question is whether it’s a jack of all trades or a master of none? 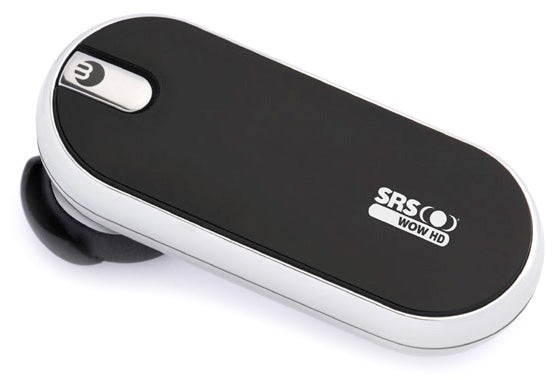 The Duo comes as two totally distinct parts. The first part looks pretty much like any run-of-the-mill mono headset. It’s short and stubby with rounded edges on both sides and comes supplied with four different ear gels of differing sizes. However, unlike many other headsets, none of the gels supplied here are designed so you can use the headset without an ear hook. Perhaps this is because the Duo is ever so slightly fatter and heavier than most headsets. It certainly needed the extra support of the ear hook to hold it stable on my ear. There are two of these supplied in the box (large and small), and as they clip around the earpiece they can be mounted on either side so lefties will have no problems.


The Duo isn’t exactly laden down with controls. In fact there are only two buttons. The first is the volume rocker switch which takes the form of think chrome strip and is mounted on the top edge of the headset. The second is the small multifunction call handling button that sits toward the back of the outer face of the Duo. The multifunction button also has an integrated multicoloured LED to let you know when it’s charging, in paring mode or needs to be topped up with juice. 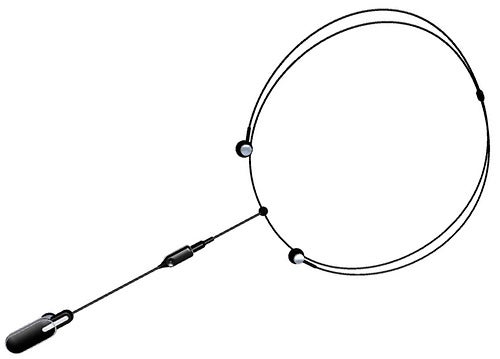 On the rear of the headset you’ll find a microUSB port. On most headsets this is used purely for charging, but that’s not the case with the Duo. Here it also doubles as a kind of expansion port because this is where you plug the Duo’s stereo headphones.


The headphones are actually supplied in two parts. The first part is an adaptor that attaches to the microUSB port, with the stereo headphones then plugging into this via a standard 3.5mm jack. As this adaptor also houses the hands-free microphone it means you can really use whatever headphones you like with the Duo. However, the supplied headphones are specially designed so the headphone cable forms a neck loop. The result is that when they’re attached to the headset it hangs around your neck like a dog tag. Or that’s the theory at least; instead it tends to hang at an awkward angle as the earpiece on the back stops it from lying flat on your chest. Because of this the look of the whole setup isn’t perhaps as elegant as it could be.

As you would expect, pairing the headset with your phone is a piece of cake. All you’ve got to do is press and hold the multifunction call button for seven seconds until the headset’s LED starts to blink blue and red. It’s then simply a matter of doing a search for the Duo on your mobile and entering the standard ‘0000’ Bluetooth passcode.


Once connected, the call controls are pretty straightforward. Tapping once answers or ends a call, and if you’re on a call and hear the call waiting alert you can press and hold the button for three seconds to connect to the new caller. The headset also has a neat voice alert feature where it will speak to you to let you know if pairing failed, it needs a recharge or if the headset is disconnected from your phone as well as various other alerts. 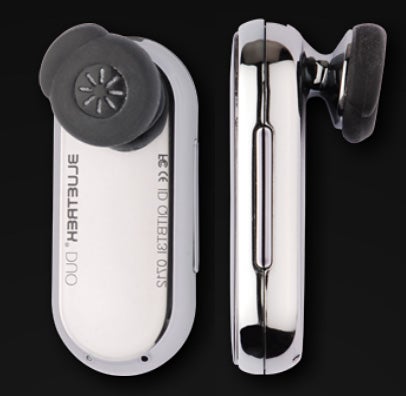 When used as a standard headset, call quality is pretty good. Callers sound loud and distinct through the mono earpiece while the mic delivers clean audio for the most part. However, callers did note that the mic tended to pick up a fair degree of background sounds in noisier environments, which isn’t really all that surprising as the headset doesn’t include any noise cancelling technology.


Our course, the sound quality from the stereo headphones is just as important and on this front the Duo scores pretty highly. The phones use sound isolating in-ear buds which help to block out a lot of background noise – handy on tube journeys in London. The ear buds produce a decent amount of bass and have a pretty solid mid-range, plus the highs tend to sparkle nicely. However, when you push the volume to higher levels a touch of distortion does tend to creep in. 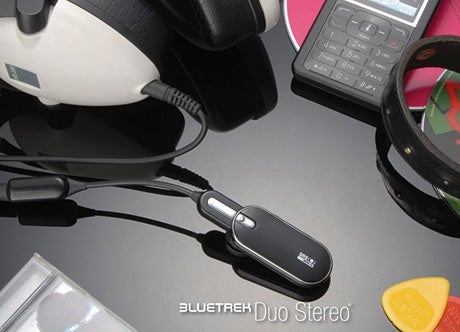 Unfortunately the integrated SRS Wow HD sound enhancement technology wasn’t up to much cop. The pop, jazz and classic settings tended to boost the mid-range so much that the sound was very tinny and unappealing, while the Trubass function didn’t really add any more bass, but instead simply created a bit of extra stereo width. Overall, we found it was a much better idea to simply leave the SRS off, which was a tad disappointing.


The Bluetrek Duo Stereo on the whole is a fairly decent performer. It works well as a headset and the sound quality from the supplied headphones is also impressive. However, it does look a little odd when you’re using it as a pair of headphones and battery life could have been better.