Lots to love about this soundbar-cum-system – and there’s lots of it to love, too

When is a soundbar not a soundbar? Well, in the case of the new Bluesound Pulse Soundbar 2i – which is a long name, though not as long as the thing itself – the answer is: when it’s a high-resolution audio multi-room wireless streaming music and home theatre system.

It might be designed to sit beneath your nice new TV, but Bluesound is adamant the Pulse 2i is more than just a soundbar.

It still looks like a soundbar, mind you. A soundbar that’s been at the steroids.

Bluesound Pulse Soundbar 2i design – a soundbar of massive size

At comfortably over a metre in length and over 14cm tall, the Pulse Soundbar 2i isn’t the most discreet soundbar you’ll ever come across. As big, black* monoliths go, it isn’t quite up there with 2001: A Space Odyssey, but it cuts an imposing figure all the same. Only the biggest TVs will look comfortable with the Bluesound sitting beneath. And, in fact, only wall-mounted TVs can be certain the 2i’s 14cm height won’t foul the bottom of their screen.

Be careful if you’re considering wall-mounting the 2i, however. It weighs almost 7 kilos.

(*The monolith is also available in white, but that spoils the film reference.) 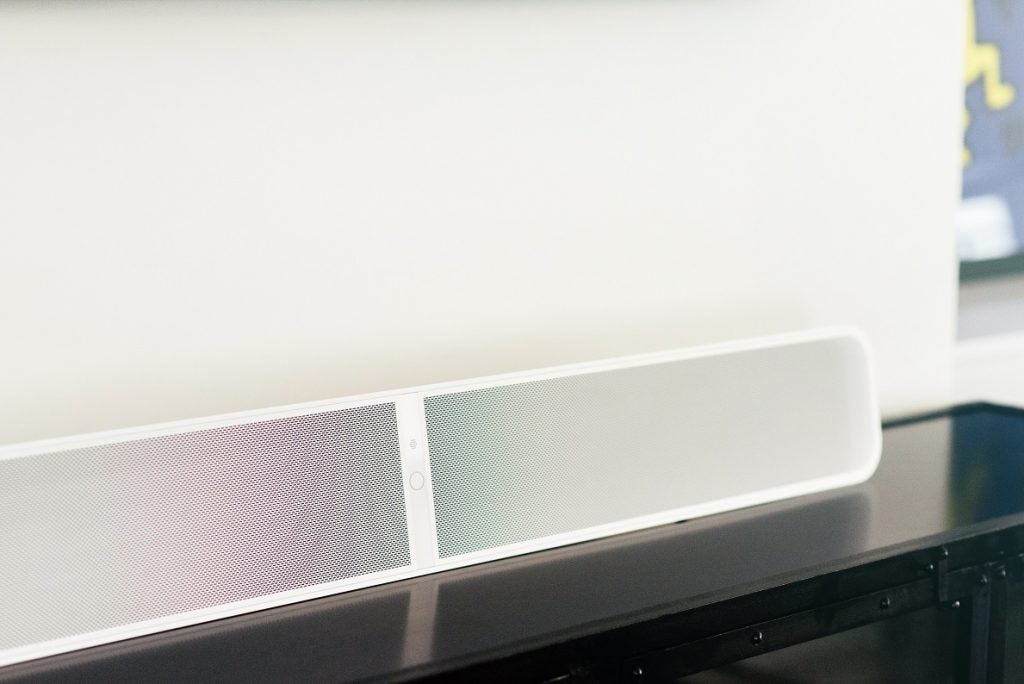 It’s smoothly finished, with simple feet to stand it upright and a wall-mount template with bracket all included in the box. At the rear, all the connections are in a recess lined with soft-touch rubberised plastic. The endcaps of the bar, each with the striking Bluesound logo, are made from the same material. The front of the Bluesound is featureless, save for a subtle light-ring that illuminates in different colours depending on what the soundbar is up to.

It’s difficult to know what else Bluesound could have done with the Pulse Soundbar 2i. Certainly, keeping the design clean and fuss-free is about the only way to prevent it looking even larger than it is.

All the 2i’s physical connections are recessed at the rear. They comprise mains power, HDMI ARC, digital optical, 3.5mm analogue, USB, subwoofer pre-out and Ethernet. Everything you could reasonably expect, in other words. 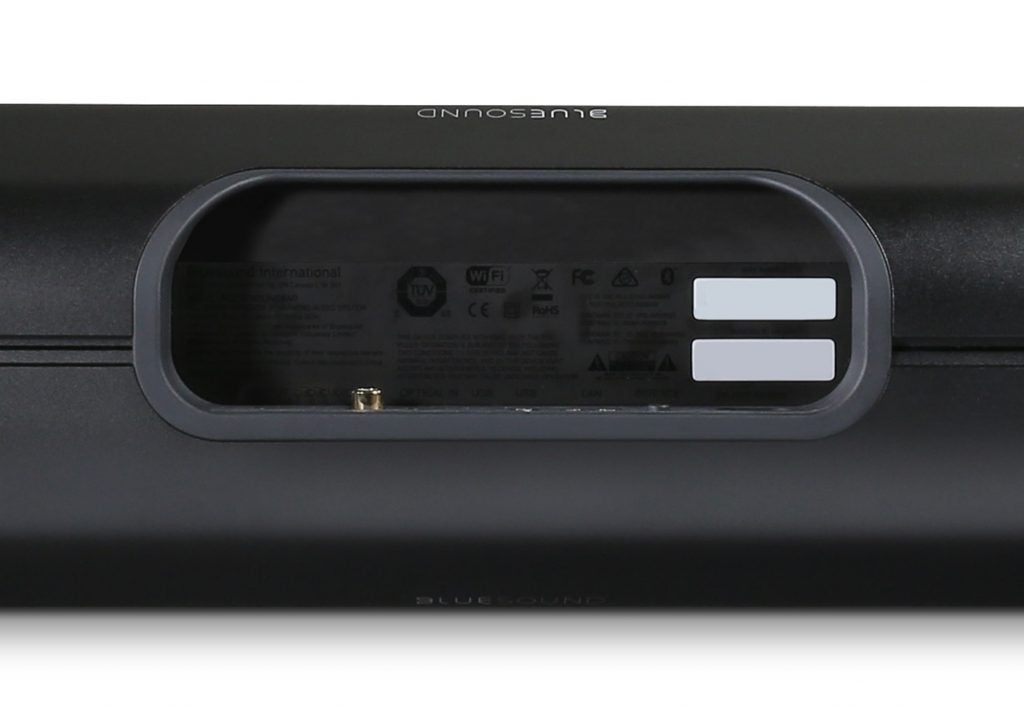 Wireless connectivity is, if anything, even more extensive. The integrated dual-band Wi-Fi is geared for aptX HD Bluetooth, and the Bluesound can both transmit and receive in this way. Apple AirPlay 2 is on board too.

Plenty of streaming services are supported, from Spotify, Amazon, Tidal and Deezer. Internet radio is accessible via the likes of TuneIn and iHeartRadio.

Control is via Bluesound’s BluOS  Controller app; it’s clean and legible, if not the last word in common-sense layouts. It’s also occasionally flummoxed by being open at the same time as the Spotify app, despite it being BluOS’s idea to open the Spotify app in the first place.

Setup, source selection, gain control and so on are all accessible here. The app is also vital for integrating the Pulse Soundbar 2i into a multi-room Bluesound system, or adding in a couple of Flex 2i wireless speakers to create a surround-sound setup.

Of course, if button-pressing (or screen-tapping) isn’t your thing, you can connect the 2i to an Amazon Echo device and shout instructions at it instead.

There’s also the option of adding a Pulse subwoofer for ultimate neighbour annoyance – but with a total of 120 watts of power driving two 25mm tweeters, two 50mm mid-range drivers, a couple of 100mm woofers and a pair of 100mm passive bass radiators, the 2i ought not be short of low-frequency oomph.

Which turns out to be the case. Bluesound claims the Pulse Soundbar 2i will reach down to 55Hz without the assistance of a subwoofer, and there’s certainly enough low-frequency presence and solidity during a listen to a Spotify file of Cypress Hill’s Stoned Is The Way Of The Walk to make it seem reasonable. The 2i hits hard and true, with little in the way of overhang to bass sounds. Only the most heedless home-cinema-head will find a big on-screen explosion or planetary collision short of wallop. 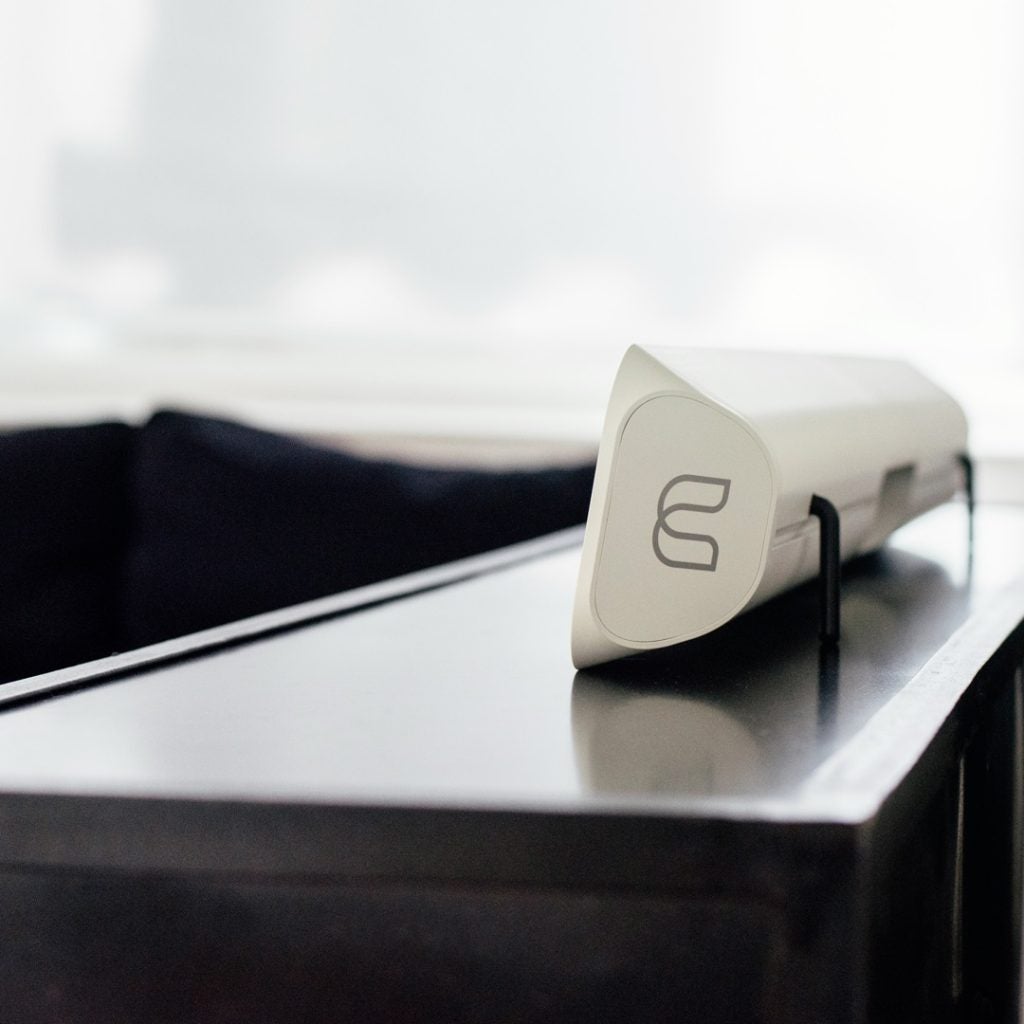 Above all this punch, the Bluesound’s mid-range is open and spacious, with plenty of detail loaded into dialogue or vocals. Richard E Grant’s imprecations during Withnail And I are every bit as characterful as Thom Yorke’s as he grumbles through Unkle’s Rabbit In Your Headlights.

The top of the frequency range, too, is full, rich and amply detailed.

The Bluesound integrates all this information well, delivering a convincingly deep soundstage with a reasonable impression of three-dimensionality. It isn’t the widest presentation you’ll ever have heard from a soundbar, particularly when you consider that the width of the 2i gives it every chance of delivering a broad sound, but individual elements of a song or a soundtrack coexist without getting on top of each other.

What slightly lets the Pulse Soundbar 2i down, and ultimately makes it a less exciting home cinema device than it should be, is a lack of out-and-out dynamic range. A film such as Inception makes as much use of the distance between “outright silence” and “ear-splitting action overload” as does a recording such as Jack White’s Lazaretto, but despite all its brawn and promising power rating, the Bluesound doesn’t quite have what it takes.

You should buy the Bluesound Pulse Soundbar 2i if…

You want a Bluesound Pulse Soundbar 2i because you like Bluesound’s commitment to hi-res audio. If so the Bluesound will serve you well.

With multi-room possible if you’re already in the Bluesound ecosystem, it becomes even easier to set-up an audio system that stretches throughout the home.

Alexa voice control is supported if you’re someone who wants to convenience of voice assistant smarts in your home products.

You shouldn’t buy the Bluesound Pulse Soundbar 2i if…

Compared to, say, the Dali Kubik One  – it’s even more transparent and revealing than the 2i, and it has greater dynamic capability too.

The Soundbar 2i is, quite frankly, a bit of a biffer. If you’re short on space then perhaps it’s safe to give this a sideways step.