With its superior build quality and comprehensive wireless functionality, the Pulse Mini 2i is hard to resist

What is the Bluesound Pulse Mini 2i?

Part of a comprehensive range refresh from Bluesound (as evidenced by the the new “i” suffix), it’s a stablemate to the smaller, portable Pulse Flex 2i, much-larger Pulse 2i (£749), and Pulse Soundbar 2i (from £799).

All these new “i” offerings boast better acoustic design and amplification, with more capable chipsets beneath the lid. Given that previous Bluesound speakers have set the pace in terms of raw performance for all-in-one wireless music systems, expectations are high. 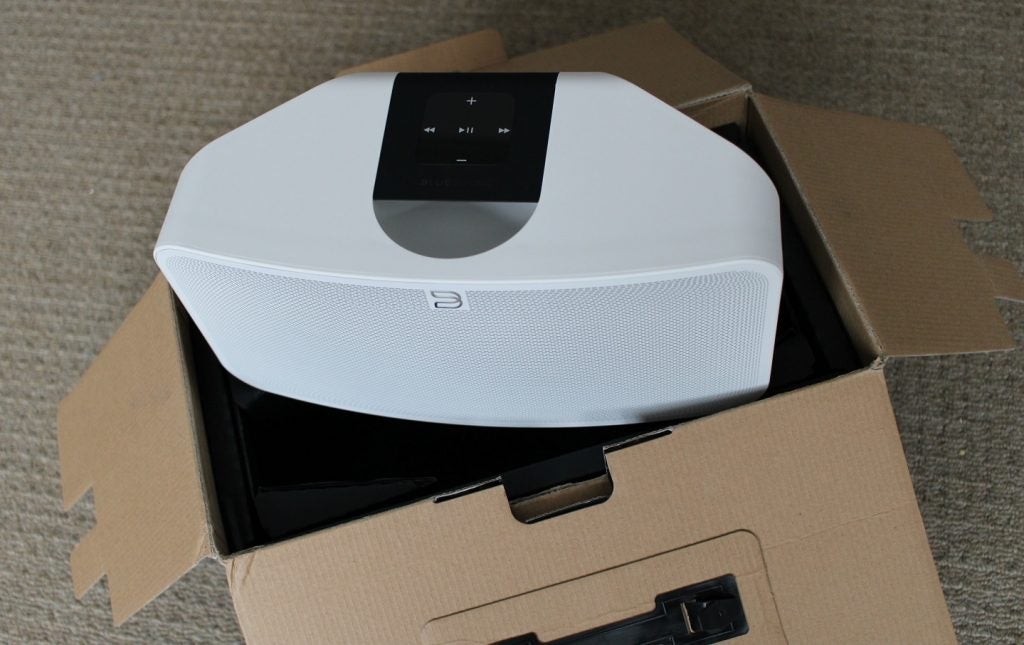 Bluesound products definitely have their own aesthetic. The silhouette is curvaceous and contemporary. Despite the compact form factor, the Pulse Mini 2i is now definitely stereophonic (unlike its lookalike predecessor). Behind its curved, non-removable metallic grille sit two 10cm woofers, and a pair of 2cm tweeters, driven by 100w of DSP-tuned amplification.

Build quality is gorgeous. There’s a rubbery, tactile feel to the cabinet that’s really premium. Our review sample was finished in trendy white, although a more conventional black edition is also available. 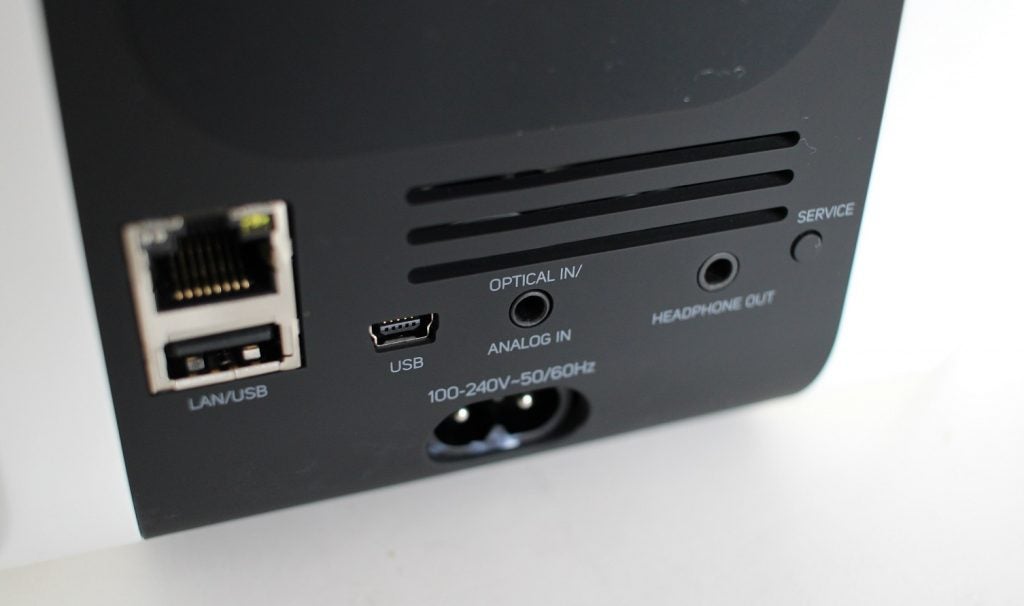 In addition to a raft of wireless options, there’s a 3.5mm analogue optical digital input, USB port, Ethernet, and headphone jack. A digital optical audio adapter is supplied in the box for that mini-jack, which allows the system to function as a TV audio upgrade.

Small enough to sit below a TV screen, the unit has only forward-facing drivers, which means it can be parked on an AV shelf, or furniture.

The system runs on the BluOS platform, which has also been adopted by NAD and DALI.

System set up is slick and swift. Once you’ve connected the speaker to your network, you’re pretty much good to go.

There’s a selection of touch controls, atop a moulded carry handle, although these are more token than practical. It should be said that this unit isn’t a portable as such. More likely, you’ll want to control the system using the BluOS app. This handles source selection, from streaming services and your own music library to locally connected gadgets. 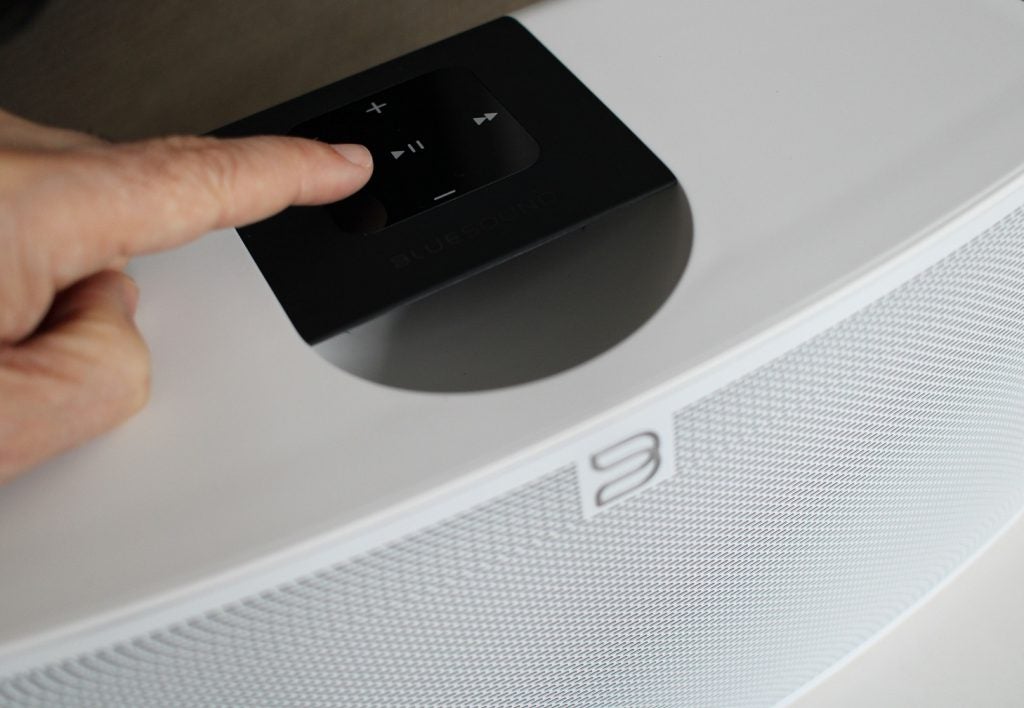 What’s more, this single Pulse Mini 2i can extend AirPlay 2 compatibility across an entire existing BluOS ecosystem at a stroke.

If you’re not an Apple aficionado, you may be more interested in the Amazon Alexa skill. This can be used to ask any network-connected Echo device to stream direct to the Mini 2i – “Alexa, ask BluVoice to play ‘BabyMetal’ on Tidal.”

The Pulse Mini 2i also supports two-way Bluetooth. Thanks to Receive and Transmit functionality, you can listen to any connected source on a pair of wireless Bluetooth headphones. Given that the speaker can double as a TV soundbar (of sorts), this is extremely useful if you want to kick back with some late-night action, or catch up on some gaming. Alternatively, you could just chill with some cool jazz.

Related: Apple AirPlay 2 is heading to Bluesound Gen 2i

Like its predecessor, the Pulse Mini 2i is perfectly at home with high-res audio files. Compatible with 24-bit FLAC, WAV, AIFF, MP3, AAC, WMA, OGG, WMA, ALAC, as well as the MQA audio format, it will work with most available sources. All key streaming services are built into the BluOS app. Alternatively, you can listen up to 24bit/48kHz over Bluetooth HD. 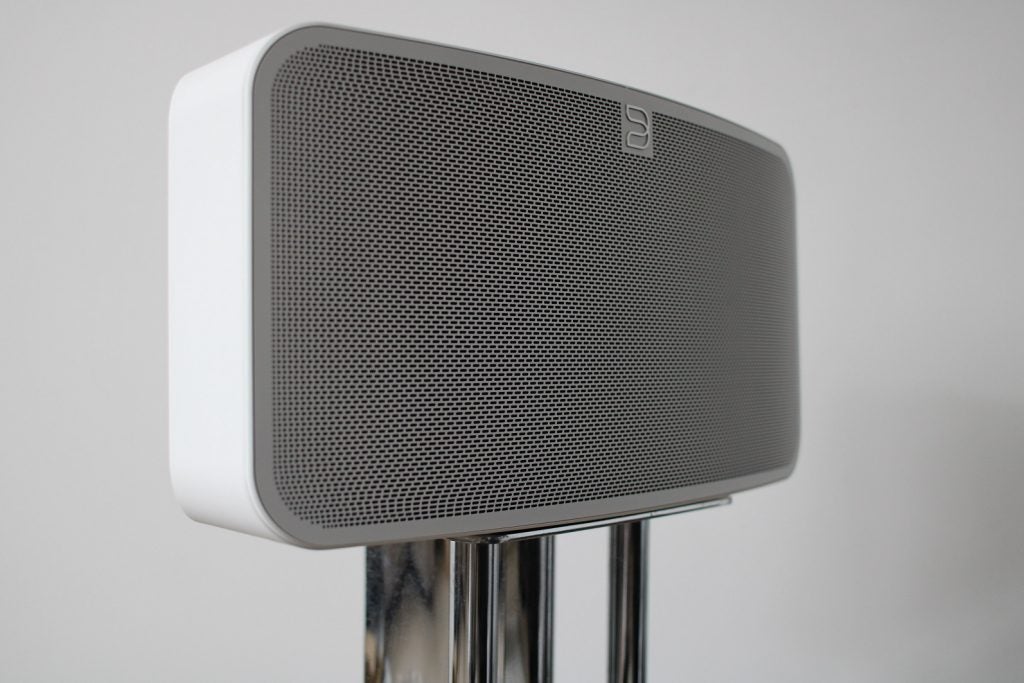 And it sounds really good. The Pulse Mini 2i creates a soundstage that’s out of proportion to its physical size. An improved driver configuration has effectively widened the stereo presentation, while that up-rated amplification effectively doubles the amount of dynamic attack on tap.

There may not be a subwoofer in play, but those dual woofers are full of deep drama. A run through Black Sabbath’s legendary debut, remixed in MQA, reveals a wonderful, gutty raunch. It’s as if Iommi himself has plugged directly into the box, his riffs rocking out unfiltered.

The system also finds tremendous detail up high. It’s crisp without being brittle. In truth, this sound system doesn’t favour one genre over another, instead offering a balanced neutral tone.

If you do opt for double-duty as a TV sound system, dialogue is effortlessly smooth. Bulletproof (Sky One) sounds suitably cinematic. If you have a thin-sounding flatscreen, smaller than 50-inches, I’d be seriously tempted to hook one up.

Why buy the Bluesound Pulse Mini 2i?

If you’re in the market for an all-in-one sound system that’s high-res audio compatible, multiroom-enabled and compact enough to park anywhere in the room without drawing undue attention, then this new Bluesound is a bang-on buy.

Even the price doesn’t look too spiky, if you can co-opt it into AV duties.

With its superior build quality and comprehensive wireless functionality, the Pulse Mini 2i is hard to resist. It may not have integrated “smarts”, but the sheer amount of leading-edge audio tech crammed into its stylish cabinet is impressive.