What is the Bluesound Node 2?

The Node 2 is a second-generation high-res audio music streamer, built upon BluOS, the wireless network platform supported by Bluesound, NAD and PSB speakers. It can be used in isolation as a plug ‘n’ play music streamer, or integrated into a wider Bluesound multiroom audio system to send music around a connected house.

The Node 2 is part of a family of Bluesound components, which includes a range of wireless speakers and the Vault 2 – a highly sophisticated NAS and CD ripper. All support 24-bit audio.

Bluesound was the original pioneer of high-res audio. Back when 16-bit Sonos was the only game in town, the company stood alone as a champion of 24-bit streaming. Today, most of its wireless multiroom rivals have caught up. So does this audiophile upstart still cut the mustard? 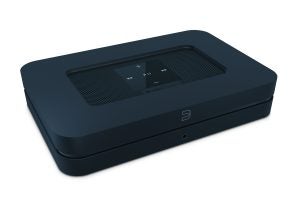 The original Node adopted an uncompromising cube design. This version is considerably more lifestyle friendly, and build quality is more impressive as well.

With rounded corners and a rubbery tactile lid, the Node 2 looks suitably premium. The top of the unit combines mesh ventilation with touch-sensitive transport controls. There’s no display; the box communicates via an LED on the front fascia. This glows solid blue when it’s connected online, and alternates between red and green depending on what else it’s up to.

Although the device is relatively compact, the power supply is integrated; there’s no separate brick. It’s available in either black or white.

Connectivity is varied. The rear panel offers analogue stereo and optical and coaxial digital audio outputs, plus a subwoofer out. There’s also a 3.5mm hybrid optical/analogue input and 12v trigger. Beneath an Ethernet jack, you’ll find a USB media port.

While there’s an IR cable input, no IR remote control is actually supplied with the streamer. I get the whole app control deal – but for £500, surely a small credit-card zapper isn’t too much to ask?

The streamer can also be plumbed into a custom install ecosystem, and is compatible with Control4, RTI, Crestron and URC. It’s also compatible with Roon, for those who have adopted that particular music playing environment.

Everything you need is included in the box, including a mini-jack to stereo lead and a pair of low-cost phono cables. For this audition, I used Chord Shawline analogue stereo cables. 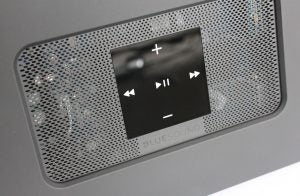 You can get the Node 2 up and running using either Wi-Fi or a wired Ethernet connection. I opted for the latter, since it’s quicker and more reliable. All you then need is the Bluesound Controller app (available for iOS, Android and Kindle Fire) on your smartphone or tablet. Once launched, the Node 2 automatically pops up. First time out of the box, you’ll probably be prompted to update firmware.

In addition to Wi-Fi (2.4GHz only) there’s also Bluetooth with aptX, although it doesn’t support streaming to Bluetooth headphones. While it’s perhaps surprising that the Node 2 has been around for a few years (the company doesn’t upgrade its product line that often), firmware updates ensure the box still functions like a contemporary streamer.

The BluOS app has a number of preset music services. These include Tunein Radio, Deezer, Qobuz and Tidal. The streamer can also access NAS devices, although it doesn’t support UPnP, so you’ll need to manually configure network shares, which many users will deem unduly anti-social. Rival devices automatically locate any NAS boxes on a network and recognise popular media servers.

File and codec support is comprehensive. High-res support includes FLAC, WAV and AIFF. MQA decoding is also available, albeit only via the Bluesound app and the player’s analogue output. If you want to slum it, the streamer will also play MP3, AAC and WMA files. 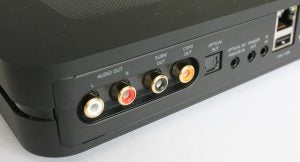 The Node 2 is far more than a cosmetic upgrade on the original. It features a 1GHz ARM Cortex-9 multi-core processor, which is a significant improvement over its predecessor’s Cortex A8. Audio conversion is handled by a 32-bit 192kHz DAC. The result is a sweet-sounding streamer with an engaging character. There’s nothing hard-edged about its analogue performance; it’s uniformly melodious and seductive.

‘A Horse With No Name’ by America demonstrates just how spacious the Node 2 can sound, with crisp, clean acoustic guitar and pitter-patter percussion. The track lopes along, exhibiting keen detail.

The Node 2 may be articulate, but it’s also gutsy. Metallica’s ‘Master of Puppets’ is a blizzard of guitars, but the streamer holds the hard rock onslaught in check; the soundstage is powerful yet coherent.

While the Node 2 has no problem with dynamics, after running through some favourites I felt it possibly lacks absolute resolution, or bite. There’s no shortage of space and musicality about its performance, however, and it does a remarkably fine job of taking the hash off lower-resolution sources. Everything just sounds swell. 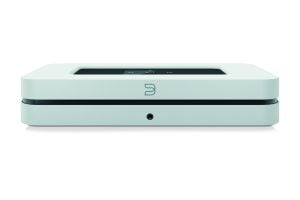 Why buy the Bluesound Node 2?

The Bluesound Node 2 is an adept, musical streamer, with a wide ranging feature set. While it’s of principal interest to those who have already invested in Bluesound (and compatible NAD) hardware, it’s easy enough to incorporate in a more traditional audio system, bringing wireless streaming to non-connected components. Streaming support is good, although network functionality could be better.

The Node 2 faces strong competition from the likes of the Arcam rPlay and Cambridge Audio CXN, but is more than able to hold its own against both in a song contest.

The Node 2 is an excellent standalone hi-res audio music streamer – and works just as well in a multiroom setup.