The Blue Aura WS80i is a wireless speaker system that allows you to beam audio signals from any source (PC, Mac, Blu-ray player, Freeview box) anywhere around the house. Pick up a few pairs of the powered speakers and you can even beam the same audio signal to multiple rooms. It’s a potential problem solver if you’re tired of the lacklustre sound on offer from your flatpanel TV but don’t fancy going down the full 5.1-channel route. The speakers themselves are pretty luxurious in terms of looks and build quality. Despite their inherent multimedia credentials, they have more in common with hi-fi or home cinema speakers than desktop PC ones. For example, they’re clad in a lovely faux-leather black finish that’s soft to the touch, with white stitching running along the top that gives them plenty of living-room appeal. They’re also available in white, but the black version is by far the most attractive. At 148(w) x 235(h) x 210(d)mm they’re not exactly compact, but they can easily be perched on shelves, furniture or the specially-designed stands (also available in black or white).

There’s nothing shoddy about the build quality either, and it’s not hard to see where you’re money’s going – they’re heavy, incredibly sturdy and sport a strong metal speaker mesh wedged tightly into the front. A circular LED is also found on the front, which relates to the wireless functionality as we’ll explain later. On the back of each speaker is an input for the supplied power adapter alongside a button that helps lock into the wireless signal if you have any installation problems, although that should all happen automatically. 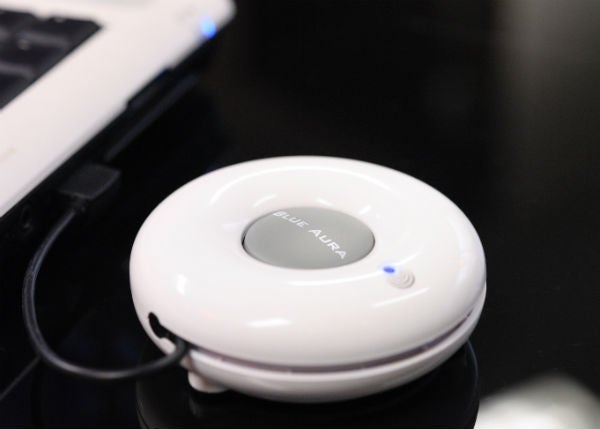 Also in the box is a wireless transmitter, which is shaped like a little donut with a large grey button where the hole would be. Attached to it is a USB 2.0 lead that you plug into a free port on your PC, as well as a 3.5mm minijack input for use with other devices. A tiny LED glows three different colours to indicate which of the different ‘zones’ is being used.

On the inside, the speakers are well-specced. Each one contains a wireless receiver and Texas Instruments digital signal processing, plus they’re bi-amped with 2 x 25W Class D amplifiers. They use a rear-firing reflex port design with two drivers – a 1in soft dome ferrofluid cooled tweeter and a 4.5in mid/bass paper cone. Frequency response is quoted as 45Hz to 22kHz.

The wireless transmitter, which uses STS technology courtesy of US wireless audio specialist SMSC, operates on the 2.4GHz RF band with a sampling rate of 48.1kHz, and has a signal range of up to 25 metres. Blue Aura says audio delays aren’t a problem, with a maximum audio latency of 18ms. 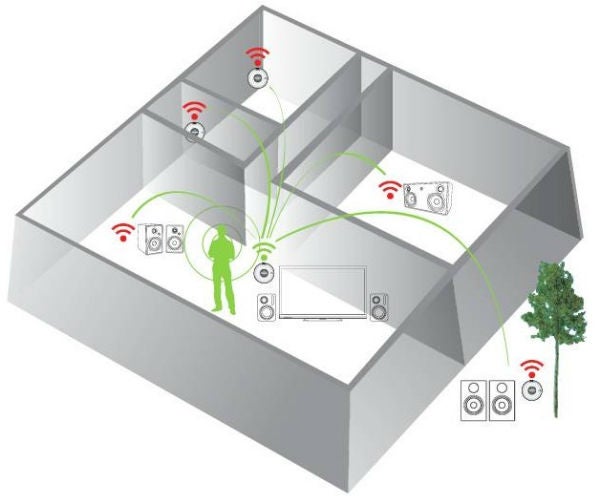 Installing the system takes a little time given how many bits are in the box. There are two-part power leads for both speakers, plus the transmitter, remote, transmitter plug, minijack cable and speakers themselves – we thought it would never end. But it’s all fairly self explanatory, and the manual spells everything out in well-written English.

The first hurdle to overcome is locating both speakers next to a mains plug socket, which may limit your placement options. It’s a necessary evil, but the need to connect a power cable to each speaker could also get fairly messy if the speakers are placed up high – thankfully the £85 optional stands feature a cable management system, which might make them worth the investment.

If you’re using the WS80i with a PC or Mac, installation is a cinch, in theory. Plug the transmitter’s USB lead into a free port, and wait for the OS to install the relevant drivers. Sadly this took longer than usual on our Windows 7 laptop, and we had to delve into Control Panel and give it a nudge. You also have to select the speakers manually in Windows Media Player but none of this takes an unreasonable amount of brain power or time to resolve.

Once that’s done, you have to hit the ‘Station’ button on the remote, which cycles through the three zones (Blue, Red and Green) and locks on when it finds a signal – the colour of the LEDs on the speaker and transmitter have to match. This happened quickly and reliably every time we swapped channels.

If you’re using a different device, such as an MP3 player, TV, hi-fi system or Blu-ray deck, you need to plug the transmitter into the mains using the supplied USB plug because it’s not being powered from a PC. Then connect a cable between the device’s output and the transmitter’s input (in the case of a Blu-ray deck or TV, you may need a stereo phono to minijack lead, which isn’t supplied).

Blue Aura sells these WSt transmitters separately for £39 a pop, so you can connect them to various devices and beam them to the speakers using the three coloured ‘zones’. You can also add extra pairs of the WS80 speakers to create a proper multi-room system. 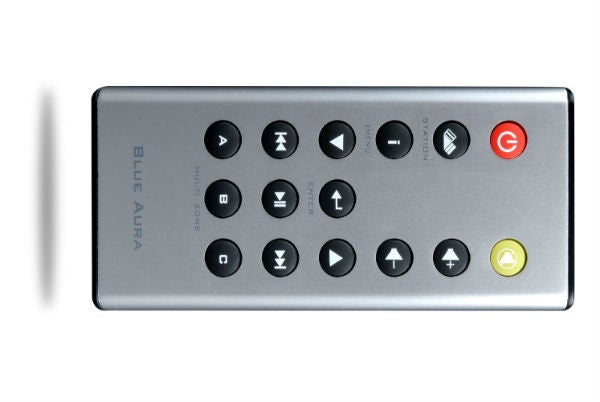 The excellent build quality of the speakers is matched by that of the remote. It’s the size of a credit card but chunky, plus it looks attractive in its sparkly silver finish. The layout is uncluttered and its few buttons are well-labelled. Press the volume buttons and it affects both speakers, but you can point the remote at an individual speaker for certain functions (toggling through the zones, for example).

Playing a selection of tunes from our PC, it didn’t take us long to realise that the WS80i is a superb performer. These are proper hi-fi speakers, offering tremendous bass depth that lends weight and warmth to music like Incognito’s Transatlantic RPM. House and dance beats get a fast, attacking delivery, backed up by tight bass response, while vocals sound smooth and natural, not nasal. High frequencies are also reasonably crisp, although it’s not the most open sound we’ve ever heard. For that reason they can’t match the out-and-out airiness and detail retrieval of front speakers from the likes of Acoustic Energy and Monitor Audio, but this is a much better performance than we expected, given their ‘jack of all trades’ approach.

Next we plugged the transmitter into to our Samsung Blu-ray deck (connected to its analogue stereo outputs) and tried out the system with Children of Men on Blu-ray. The WS80s put a decent amount of muscle behind it, which helps capture the excitement and scale of the movie’s action scenes. Their punchy bass output, strong midrange and clear high frequencies make this a dynamic and engaging listen, particularly the pulsating ambush scene in the woods. The sound of raspy motorbike engines, shouting voices, gunshots and explosions are conveyed with pleasing clarity and oomph. They also provide a wide stereo soundstage.

In terms of signal stability it worked fine in any room of the house upstairs and down, maintaining the excellent sound quality, although it spluttered when we took the laptop for walkies around the garden and pushed it to the limits of its quoted range. 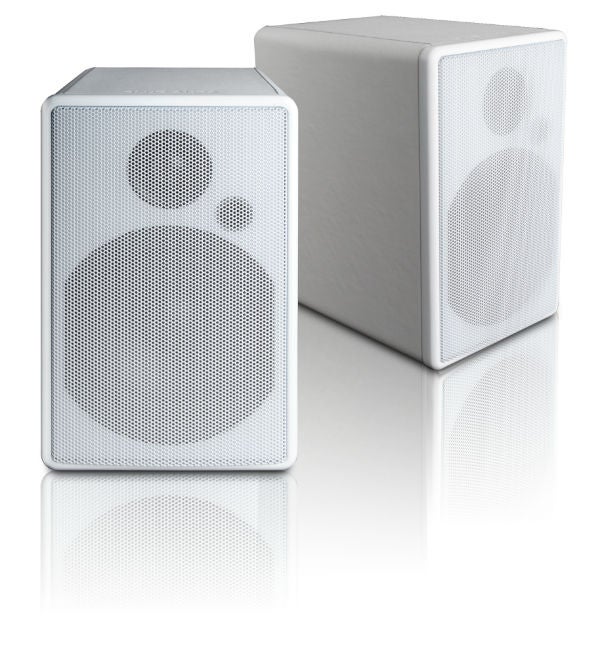 Verdict
It may not be a completely wireless system, but there are still plenty of reasons to give Blue Aura’s impressive speaker system a whirl. Primarily its sound quality is fantastic, rich in bass and detail, which makes movies and music from any source sound highly enjoyable. Then there’s the build quality and design, which will make these speakers a talking point in any room. They’re also easy to install, provided you can overcome the need to put the speaker near mains sockets, and easy to use thanks to the nifty remote and quick, reliable ‘three zone’ wireless transmission system. Yes it’s fairly pricey at £400, but the overall sound and build quality won’t leave you feeling short-changed. And on that basis we can’t wait to hear more from this promising new company.