Bloom.fm is the latest music streaming service to come to the UK, joining the ranks of Rdio, Napster and Pure Music. But none of those rivals has managed to get close to toppling market leader Spotify. Will Bloom.fm?

It may not prove to be a giant-killer, but Bloom.fm’s sweet visuals and interesting pricing structure may see it take a bite out of Spotify’s ankles.

Spotify vs Napster vs Rdio vs Pure Music >

Bloom.fm is a mixture of a full streaming service like Spotify and an online “radio” based service like Last.fm. If you don’t want to pay anything at all you’re given access to hundreds of radio stations. You don’t get to choose exactly what they play, but pick an artist or genre and the service’s giant online database will formulate a playlist of relevant acts. 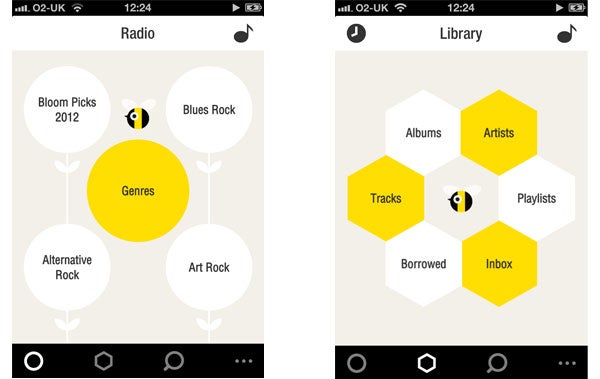 This free service alone is enough to mark out Bloom.fm as a “must try” app. For one, the radio engine is solid, and as well as picking artists’ own radio stations, you can choose sub-genres, decades and Bloom’s own picks too. Moderately obscure-sounding genres like indietronica, Deathcore and Raggamuffin are here – and it really does feel like a service made by and for music lovers.

The breezy interface helps to make browsing between these fluid playlists a joy too. The Bloom.fm team has put a lot of effort into making the app look more personality-filled than any other music streaming app out there.

In place of vanilla lists of genres, each radio station sub-genre selection appears as a disc that rotates around a larger parent genre disc. Depending on your disposition, it’s a flower and its petals, or a new-age hipster-y jukebox – a nod to those once-loved discs most of us don’t buy anymore. These cute visual inflections carry on throughout Bloom.fm, and the star of the show is a little bee that flits around the screen throughout the interface. 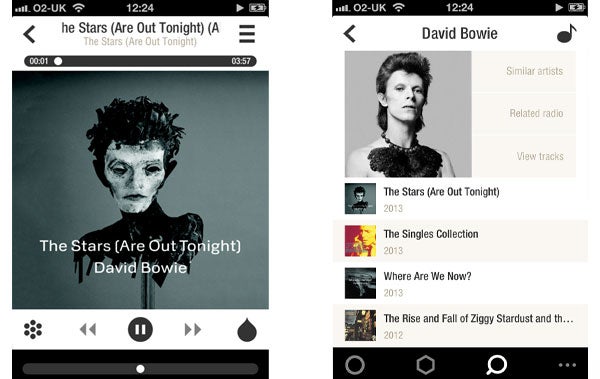 Take Bloom.fm as a fun, free app to explore and these charms work as intended. However, we’re not convinced they won’t tire should you take the paid route and treat Bloom.fm as a Spotify-equivalent. Experience visual gloss enough times and it tends to become as thin as a layer of gloss paint, especially when it appears to slow down the app’s mechanics a little too.

As holding out for a decent track on an all-but random radio station is likely to be a case of hit and miss, miss, miss and miss, these two fairly low-cost plans also let you listen to 30-second previews of any track in the Bloom.fm library. And there are plenty of them – over 16 million. Bloom.fm says it has all the major record labels signed up bar Warner Music, and it’s working on filling that gap at present.

To further increase the usefulness of these limited-sounding rental plans, you’re free to “borrow” and un-borrow tracks and albums as often as you like. Those disciplined among you will find the 200-track rental scheme no less useful than the top-bill plan. 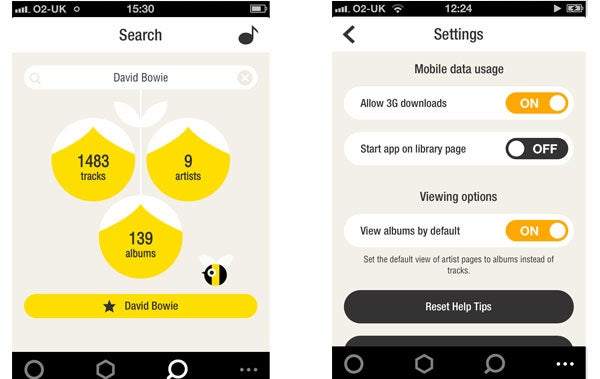 The top-end £10 a month subscription turns Bloom.fm into a cuter-looking, discovery-heavy alternative to the big streaming players like Spotify and Napster. You’re given unlimited streaming access to the 16-million-plus strong track library, and can “borrow” as many albums as you like for offline listening.

While streaming is reliable, we experienced no software crashes during testing and this is without doubt the cutest streaming service we’ve used, it’s this unlimited plan we’re not entirely convinced by. The pared-back interfaces of Napster and Spotify make getting to specific music quicker, and some of the interface quirks can start to grate once you’ve starting forking out £10 (or £13.99 through the Apple) to live with them.  Bloom.fm also doesn’t offer the neat editorial blurbs of Spotify or Naptser. It does seem to hide tracks Bloom.fm doesn’t have the right to stream better than rivals, though.

There are some technical improvements that could be made too. Audio is transmitted at a respectable 160kbps, and while 320kbps is on the way according to Bloom.fm, we’d also like to see a high-efficiency, low bit-rate option for those with severe data limits and voracious music appetites. There’s also no browser interface, so you’re more-or-less limited to using the service on your smartphone.

Thanks to these issues, we wouldn’t recommend instantly jumping ship from a premium subscription to Spotify or Rdio. But just about everyone should give Bloom.fm a go for its charming and incisive radio stations, which won’t cost you a penny to access.