If you feel that modern games have become rather too similar, then Blood Bowl 2 might pique your interest: there’s certainly no mistaking it for anything else. Conceptually, it requires its audience to possess a wide streak of geekiness, since it somehow manages to combine American Football and Warhammer, complete with orcs, dwarves and the like. And as if that wasn’t unfashionable enough, it’s also turn-based. Which is only to be expected, since it was derived from a Games Workshop board game.

The original Blood Bowl game had a distinctly amateurish feel to it, with an infuriatingly unintuitive interface and graphics that were best described as rough around the edges, but Blood Bowl 2 has more or less banished such flaws.

It’s easy enough to negotiate, whether you’re navigating its menu systems or engaging in some gameplay, and the leap to the current-gen consoles has added hitherto undreamt-of levels of crispness to the graphics, although visually it won’t impress you if you prefer your games to belong to the artier end of the spectrum.

Imagine painted Dungeons & Dragons figurines brought to digital life and you’ll pretty much have a handle on its look. Visually, it conjures images of heavy metal tribute bands. 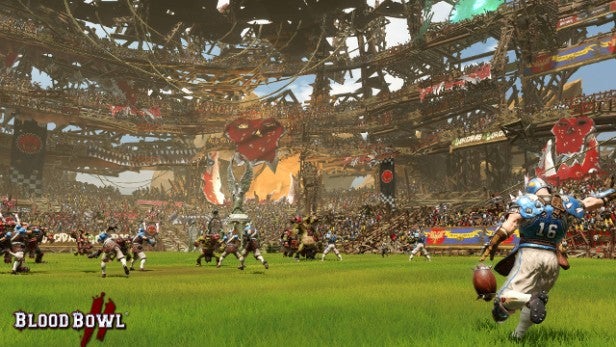 Beyond the aesthetics, it has a jokey, unsophisticated, again heavy metal-type vibe. The single-player campaign is linked and commentated on by a vampire and an ogre, called Jim and Bob respectively, who come out with some mildly amusing banter that revels in the mindless violence which forms a large part of the game. Unfortunately, when plunge into some action, their commentary swiftly becomes annoyingly repetitive.

The actual Blood Bowl games, happily, are quite fun to play – in part due to the fact that they only bear the loosest resemblance to American Football, so there are no hideously complex plays or the like to memorise and execute. Each of your players can be moved, or instructed to do things like attack opposition players, pick up or run with the ball. Every move is subject to a dice roll, so your players often, for example, trip over their own feet and knock themselves out, or even fumble simple ball pick-ups. 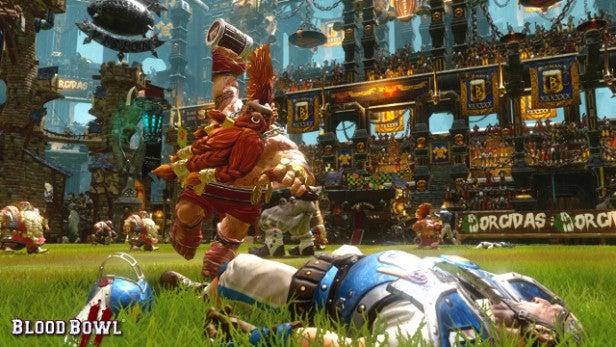 Blood Bowl is hilariously brutal – it’s possible for players to be knocked out so badly that they take no further part in a game (or even die), and you generally start each turn with a number lying unconscious. You can revive them, but only one prostrate player can then go on to attack a nearby opponent. That’s just one of many tactical nuances that render Blood Bowl 2’s core gameplay surprisingly deep and moreish.

However, the game does its best to squander that strength. In the single-player campaign – which admittedly constitutes an elaborate tutorial at first – the AI is simply pathetic. It has no interest in running with the ball in order to score touchdowns, so it’s simply a case of how many you manage to score. In the latter stages of the campaign, it does at least tip its statistics in its own favour, forcing you to think more tactically. And there’s also a team-building and resource management element to the game, which is pretty well executed. 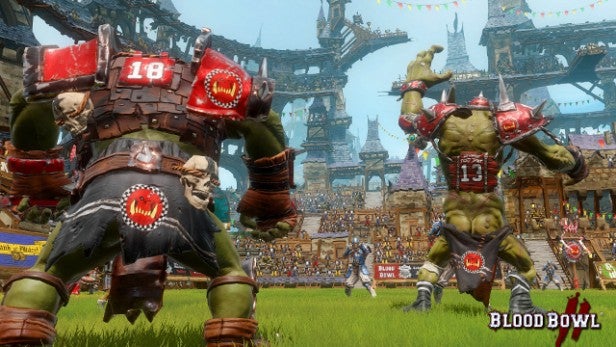 That team-building – as well as the full tactical extent of the gameplay – only really comes into its own when you play online against human opposition.  At last, your opponents behave in a sensible (and challenging) manner, and you have to take care over player recruitment and team selection. Blood Bowl 2’s online side is pretty exemplary: it’s dead easy to form or join leagues, and to jump into matches. 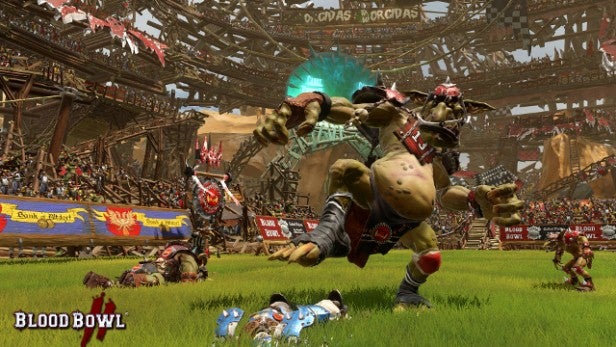 Ultimately, though, both in single-player and multiplayer modes, despite the more than decent game mechanics, Blood Bowl ends up feeling unvarying and repetitive. Unless you ascend to the heights of the online leaderboards, you will surely start to get bored with it after a while, no matter how deeply you love American Football or Warhammer. While it may be an order of magnitude better than its predecessor, it still manages to camouflage pretty good core gameplay with far too many mediocre elements.

Verdict
Blood Bowl 2 is definitely one for the board game devotees who prefer to play online rather than solo.