What is the Blink XT?

Most outdoor security cameras require some level of DIY know-how to get up and running, but the waterproof Blink XT cameras run on AA batteries, can be placed on any flat surface, and are controlled solely via a smartphone.

As such, you can have a device up and running in minutes. In fact, since they’re also available in packs of two, three and five, setting up multiple units won’t take much longer.

The following review covers the two-camera pack, which comes with the Sync Module necessary to get them talking to your Wi-Fi network. If you want to add more cameras at a later date then you can buy them without the Sync for £120 a pop.

With its hard black plastic shell, the Blink XT camera feels suitably sturdy. It feels like a GoPro that’s retired from all that daredevil stuff – and put on a bit of weight as a result.

Connecting each unit to your Wi-Fi is just a case of plugging in the Sync Module and using your phone to scan the QR code beneath the rear panel of the camera. My camera required a firmware update, but even so it took only a couple of minutes to be ready to go.

To work, each camera must be in range of the Sync Module, which in turn must be in good range of your router to maintain a steady signal from one end of the chain to the other. This means it’s highly unlikely that you’ll be able to  place your Blink camera right down the end of the garden, despite its form factor being entirely suited for just that. 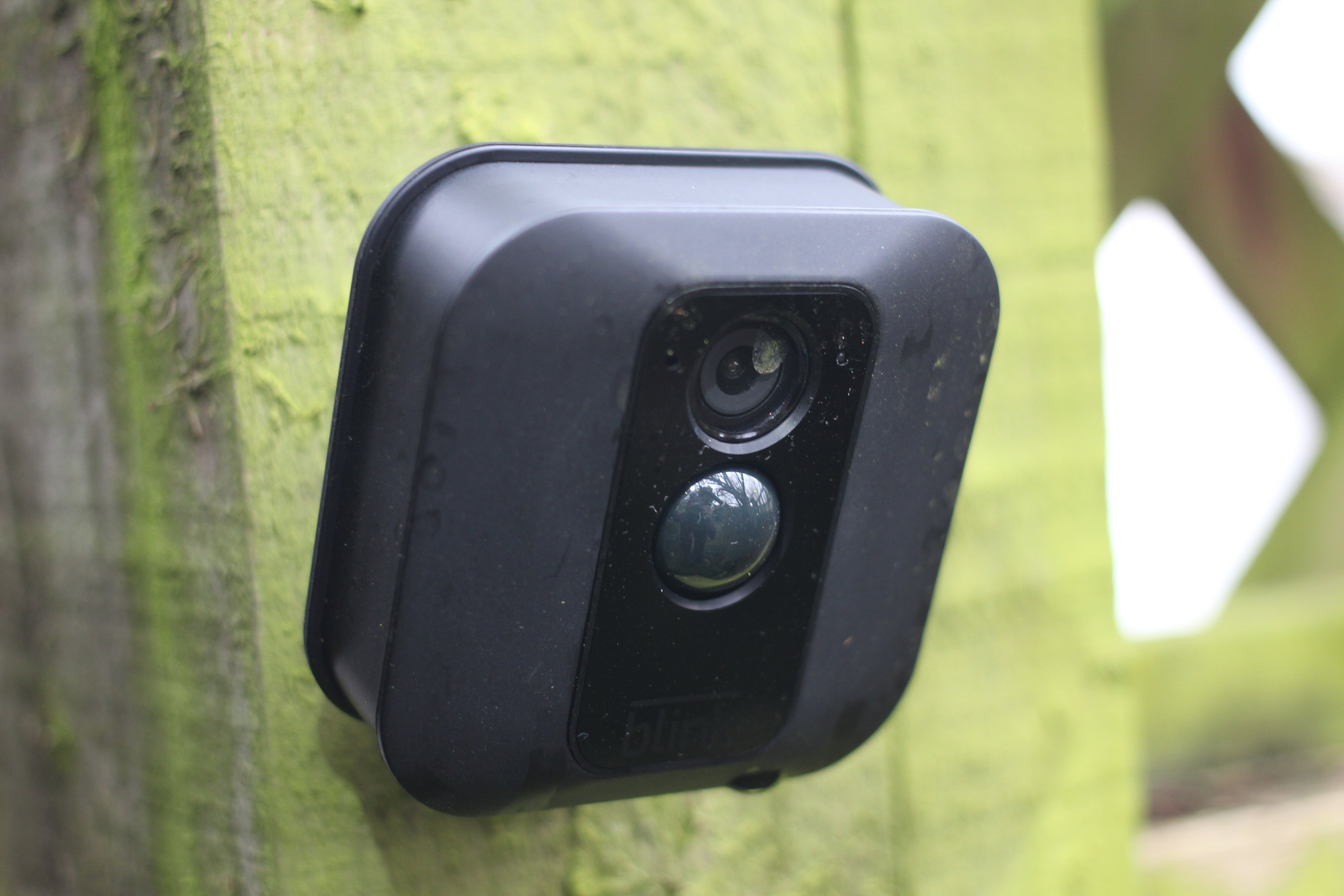 Fixtures and fittings are limited, but each camera comes with a basic plastic mounting bracket that easily snaps onto the device’s rear and allows you to tilt the camera.

Note that you can’t rotate it, however. Fortunately, the 110-degree wide-angle lens means this shouldn’t be necessary. The mount doesn’t feel particularly sturdy, mind, but once in position you shouldn’t need to touch the camera.

Wherever you position your camera, you’re probably best using the bracket to attach it to something; the camera doesn’t feel heavy enough to withstand high winds, particularly if you’ve positioned it in an exposed area. The device’s clip-on nature also means it isn’t particularly theft-proof, although stealing security cameras appears to be an unnecessarily high-risk crime.

Blink’s XT cameras are triggered by movement and will record up to one minute of video at a time, although duration and quality can be altered within the accompanying app. If you want to check in at any point, there’s also a Live View feature, and at night the cameras use infrared to see in the dark.

You can adjust motion sensitivity, but there’s no option to set specific detection zones. The XT struggles to tell the difference between an animal and a person, too, so be ready to become familiar with the local wildlife (an undersold secondary benefit of ownership if you ask me).

This is because the Blink XT uses a PIR motion sensor, rather than detecting motion in-video. The benefit is that a PIR sensor uses little battery. 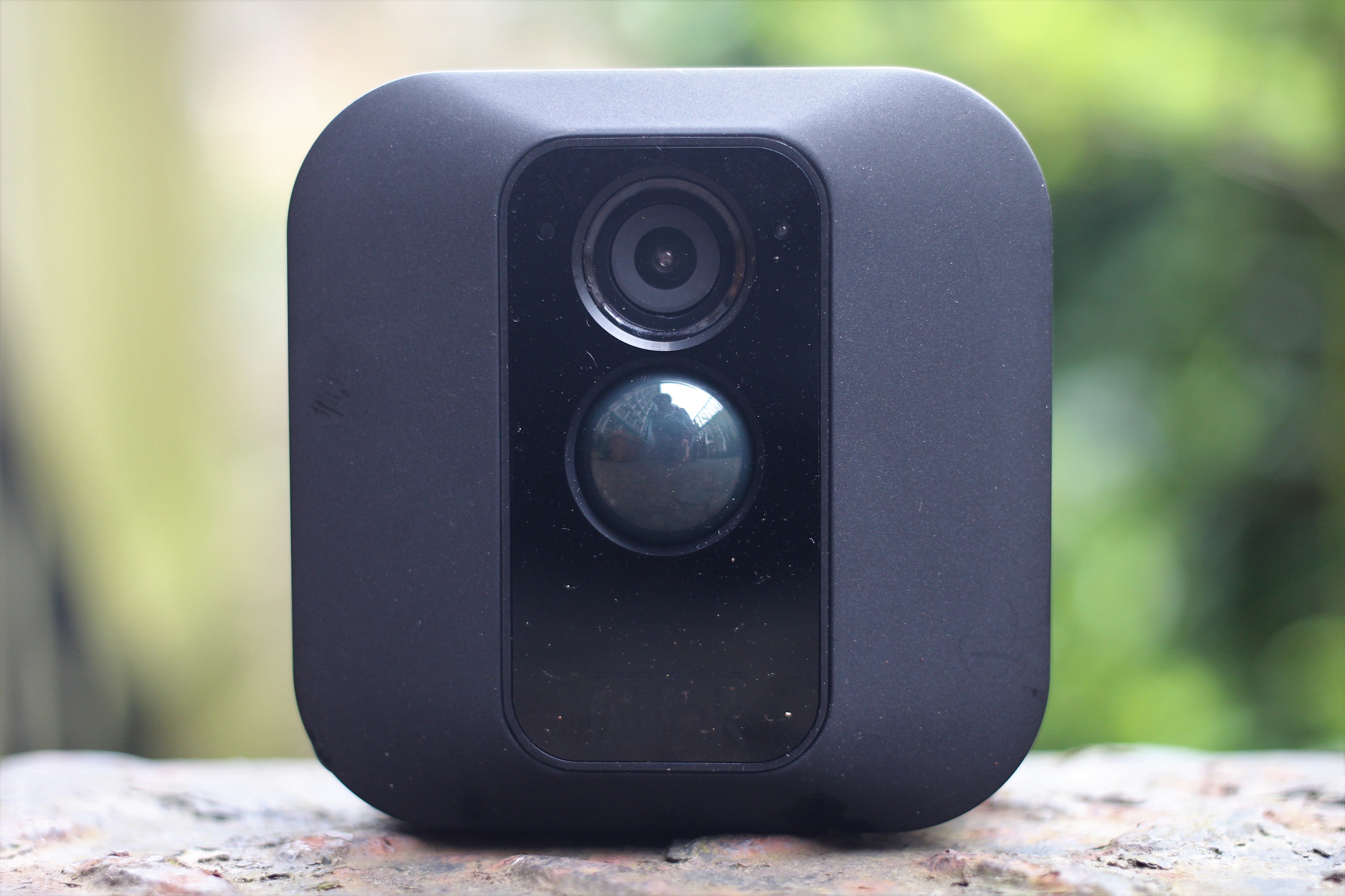 Once movement has been detected and a video clip recorded, the camera will send a notification to any phone that has the Blink app installed, and logged in to your account.

It’s a shame that it isn’t possible to have different profiles for different users, but at least the calendar-based interface makes it easy to set up schedules.

Blink reckons you can record 10 five-second clips a day with each camera, with the batteries lasting two years. As such, if your cameras are positioned somewhere that sees less traffic than that, you shouldn’t need to buy new AAs for a very long time indeed.

It didn’t rain that hard during the testing period, but my neighbour did jet-wash his fences. As a result, one of the cameras took a good drenching, but escaped unscathed. In fact, I’ve even got some good footage of it.

The Blink XT doesn’t employ a particularly sophisticated waterproofing system; you just need to squeeze the camera tightly when attaching the back panel to ensure it forms a seal. Nevertheless, it does seem to be effective.

If you already have a network of Blink’s indoor cameras then you can just add the outdoor units to the same Sync Module, but this means that you can only switch them all on or off at once.

If you want to control your outdoor cameras and indoor units independently, you’ll need two Sync Modules (each one can cope with up to 10 cameras). The Sync Modules don’t need a direct connection to your router, just Wi-Fi, so they simply take up a plug socket. Being able to run more than one network of cameras off a single bridge would be a neater solution. 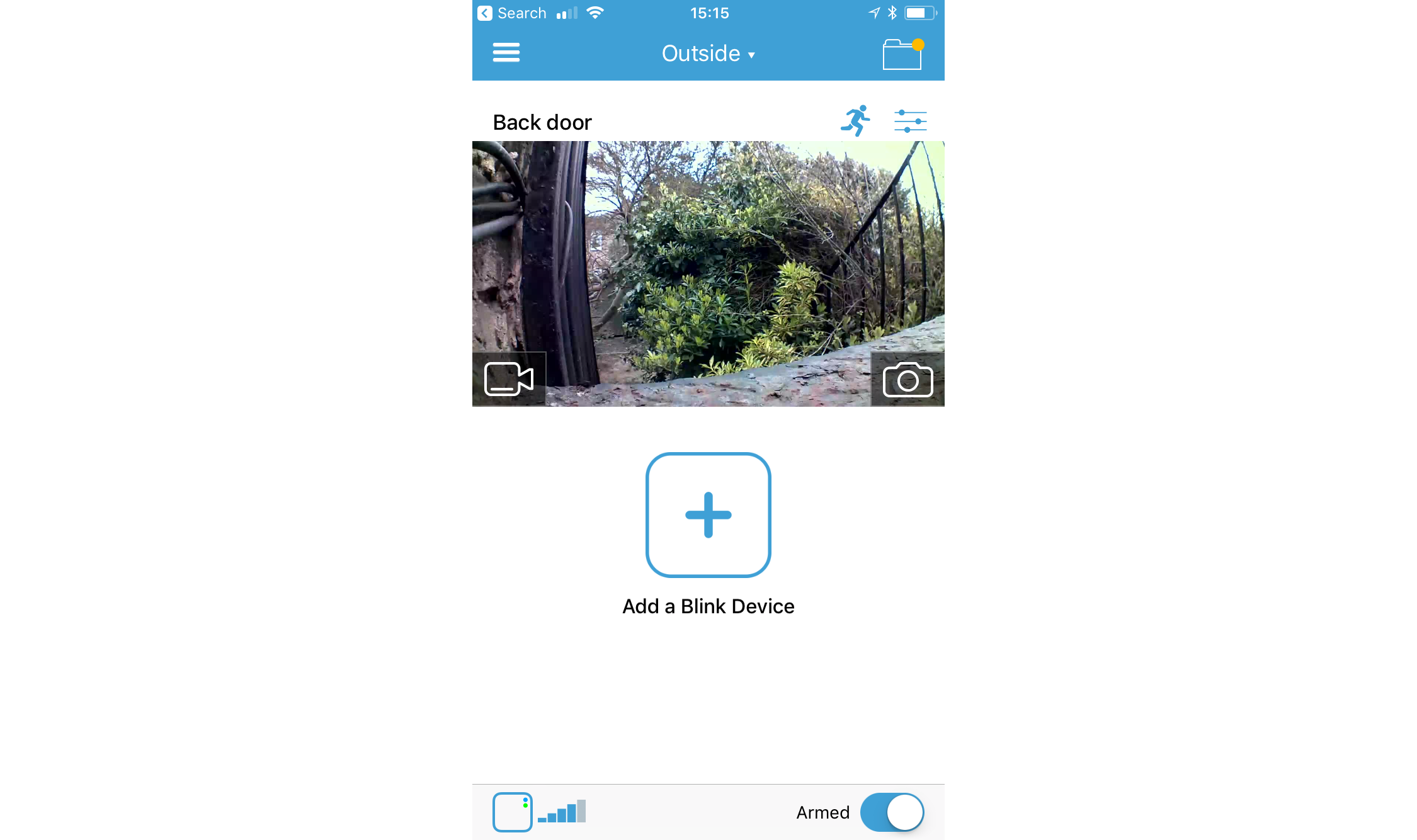 Once left to keep an eye on things, the cameras seemed to be pretty reliable – although, of course, there’s no way of knowing if they missed anything.

The biggest issue with Blink’s XT cameras was that they’d often either start recording a little too late or stop recording prematurely. Many of the videos captured start with the subject already at the centre of the frame, rather than entering it; they end before the subject has left.

A setting that you can activate will turn off the cameras if motion stops before the allotted length of the clip has been reached, but it didn’t prove 100% reliable in testing. This won’t be a problem if the footage is only required to prove the presence of someone (or something), but if you need to catch someone (or something) in the act then you need to be sure your camera will record the whole affair.

On occasion, the cameras also went offline for no apparent reason – you’re notified of this via a push notification –but would usually reconnect after a short while if left alone. This is almost certainly due to a fairly weak connection between the cameras and the Sync Module in my setup, so if your Wi-Fi is weak outside your house, you might find your placement options limited.

However, most of the issuesare constrained to the buggy app. Sometimes, it would claim the devices hadn’t armed when they quite obviously had, and I found that the app was prone to crashing after viewing live video.

However, these problems seem to be limited to the app itself, not the functionality of the cameras and didn’t ever appear to affect their operation.

The XT’s video quality is better than Blink’s indoor cameras, with 1080p available on the ‘Enhanced’ setting. Don’t expect HDR, but even on the middle HD mode it’s still plenty good enough to recognise faces, while the microphones pick up loads of ambient noise.

Audio is only one-way, however, so you can’t tell trespassers to be on their way if you catch them snooping around your bins.

Video frame rate can take half a second to get up to speed, and thanks to the wide-angle lens there’s some distortion around the edges of the frame. However, in the important areas at the centre, footage is clear and sharp with plenty of detail.

Colours can look a bit washed out in some conditions, and I found that the camera struggled to expose bright skies. Unless intruders are attacking by parachute, though, this shouldn’t be a problem. Besides, the XT isn’t here to score points based on artistic merit. 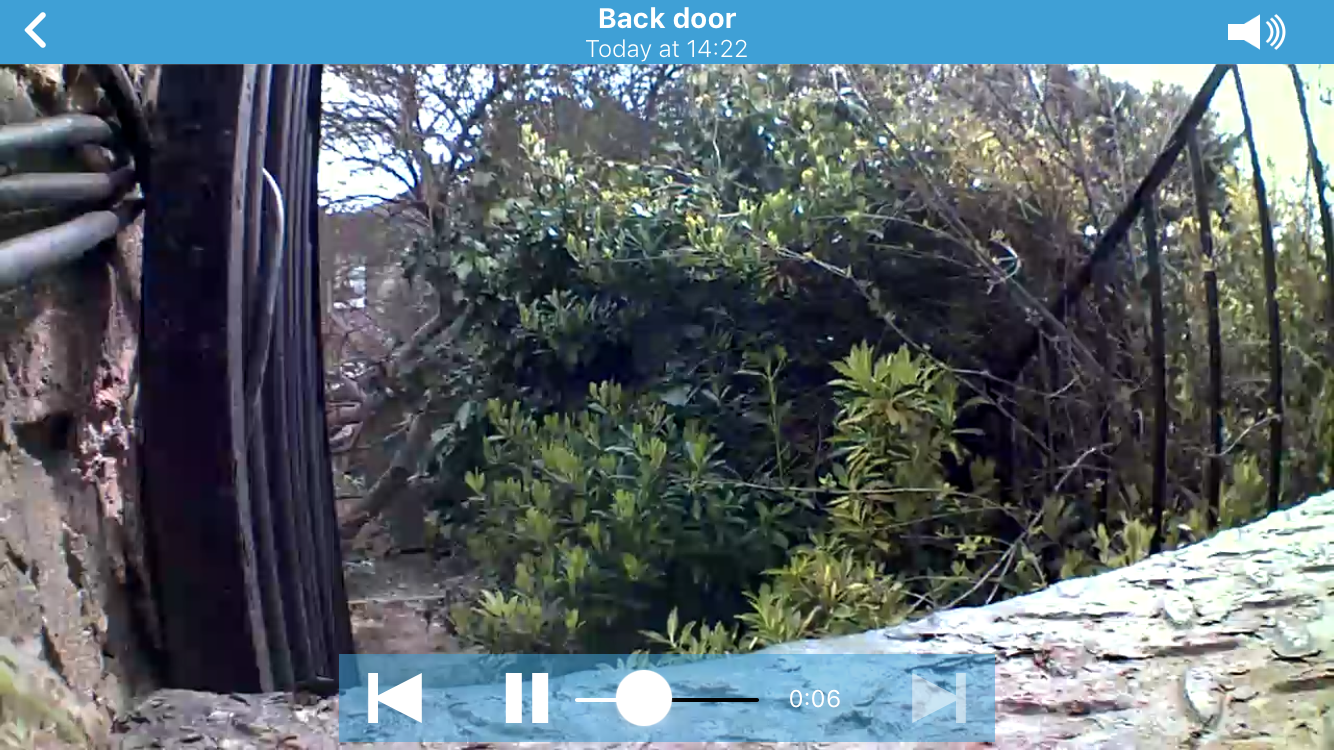 At night detail obviously takes a hit, as the camera switches to monochrome. You lose a bit of range as well, but there’s still plenty to see in each clip. 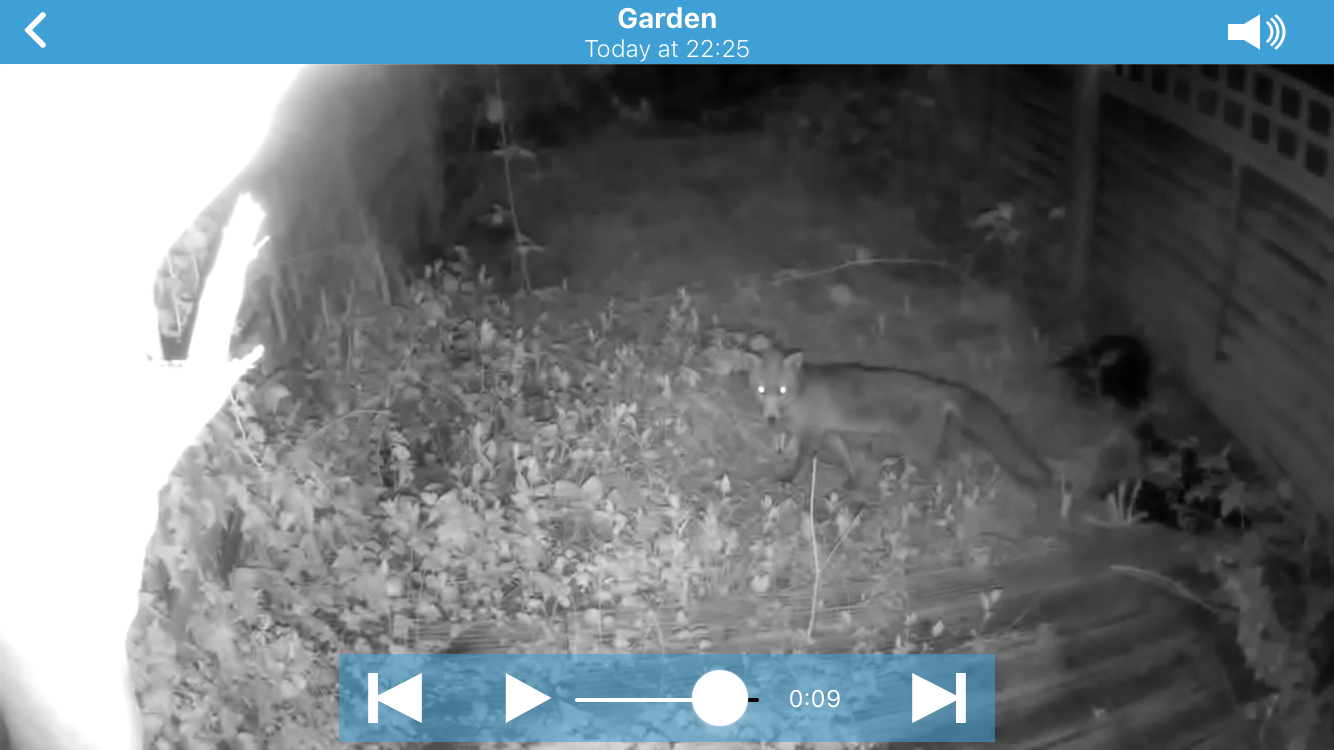 Every Blink camera comes with free cloud storage, with a maximum total capacity of two hours of video. With the default video length set to 5 seconds, that’s plenty of footage. In addition, since it automatically overwrites the oldest stuff when there’s no space left, you never have to worry about running out.

Anything you want to keep can be saved to your phone via the app.

You can add functionality to your Blink setup using the IFTTT channel. For example, it can be triggered to turn on or off by a Nest thermostat, or via GPS using either the IFTTT app. I tried the latter and it worked flawlessly.

You can also use IFTTT to get it to work with Google Home, and since Alexa support is built in, you just need to activate the skill and log in to your account. That bit’s simple – but I could only get it to disarm using Alexa, not arm, and the command you have to use is a bit of a mouthful. Until it’s improved, it probably isn’t something many people will bother using.

Why buy the Blink XT?

There are two major reasons to buy a Blink XT system: price and convenience. Both often mean making sacrifices, however, and it’s no different with the XT.

While it’s hard to fault the simplicity of the system or the quality of the video that the camera captures, I wouldn’t call it 100% reliable.

The Netgear Arlo Pro is more expensive, but this wireless system is accompanied by a better app. Or, if you can go wired then the new Nest Cam IQ Outdoor has the best image quality.

If you’re looking for an affordable deterrent that’s simple to install and operate then there’s a lot to like about Blink’s XT cameras – just be aware that there might be gaps in your evidence.

As long as you’re aware of its limitations, the Blink XT is a simple, affordable introduction to home surveillance.