Despite being rough around the edges, Blair Witch is a survival horror delight that will no doubt enrapture fans of the long-running franchise. It stays faithful to what makes the mythos so enticing while pushing it into some unpredictable new directions. Certain mechanics do feel clumsy and don't always hit the mark, with controls on console feeling rather unwieldy when combined with inconsistent performance. But with Bullet by my side, I wasn't alone in the Black Hills Forest, and it's a journey I'll happily take again.

I’ve always been fascinated with The Blair Witch Project. As a young girl I watched it with my siblings, the low-budget found footage phenomenon scarring me so badly I didn’t sleep for several nights.

A relatively understated horror film was propelled into super stardom by one of the world’s first viral marketing campaigns, convincing the audience the film was real, depicting three individuals as true to reality as they are. With this card in its hand, The Blair Witch Project went on to define a generation of horror fans.

It spawned a franchise, which resulted in two sequels, several books and videogames helping expand the mythos of Burkettsville, Maryland. But many of these failed to capture the original film’s subtlety, leaning into lazy jump-scares and overblown theories instead of spooking the viewer with what they couldn’t see. 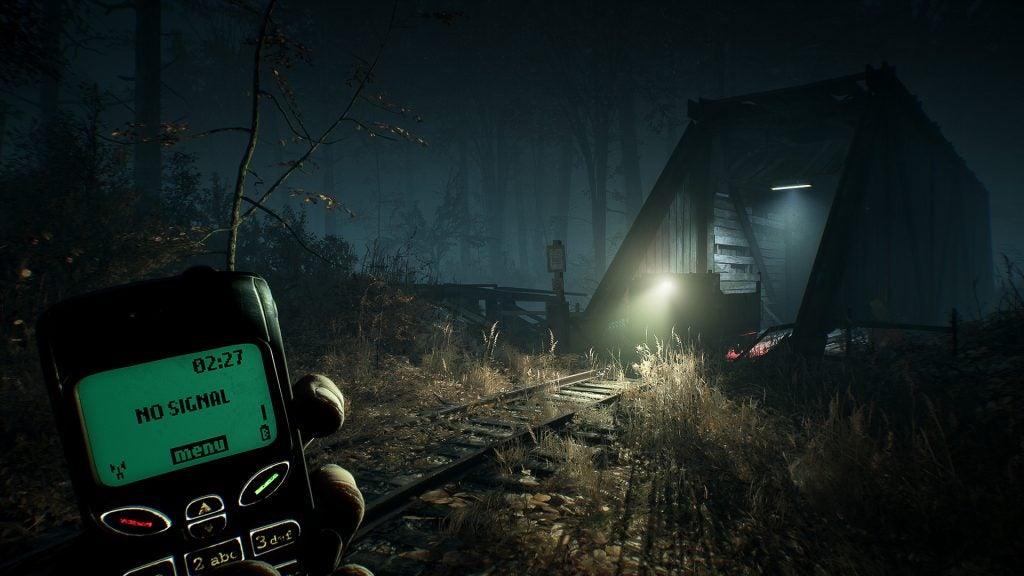 So in comes Blair Witch, a survival horror experience from the minds behind Layers of Fear and Observer. Developer Bloober Team has a consistent record when it comes to immersive, first-person experiences, so lending its craft to this franchise could be a match made in heaven.

For the most part, it delivers, expanding upon the universe in some cleverly unexpected ways, even if it abandons the delicate touch its progenitor held in such high regard. It features a narrative that begins with a melodic sense of momentum, drawing me into a mystery surrounding the witch, before descending into psychological horror that doesn’t always work, but manages to terrify regardless.

Taking place in 1996, Blair Witch inhabits a world where Heather, Mike and Josh have long since been lost to The Black Hills Forest, nothing being recovered with the exception of tapes chronicling their demise. The local populace is scared of the woods, either out of genuine fear or overblown paranoia. It’s a place you don’t step foot into, although our protagonist, Ellis, doesn’t have a choice when a young boy goes missing.

A former police officer, Ellis and his controversial past approach the forefront of Blair Witch’s narrative circumstances after a few hours – a blessing or a curse depending on your attachment to the universe. I would’ve loved to explore the forest, coming across nuggets of history that expand upon why this untimely legend came to be. The franchise has proven it has a staying power of epic proportions, drawing in hardcore fans desperate to pore over all the little details. I was ready to do such a thing, but this didn’t deliver. 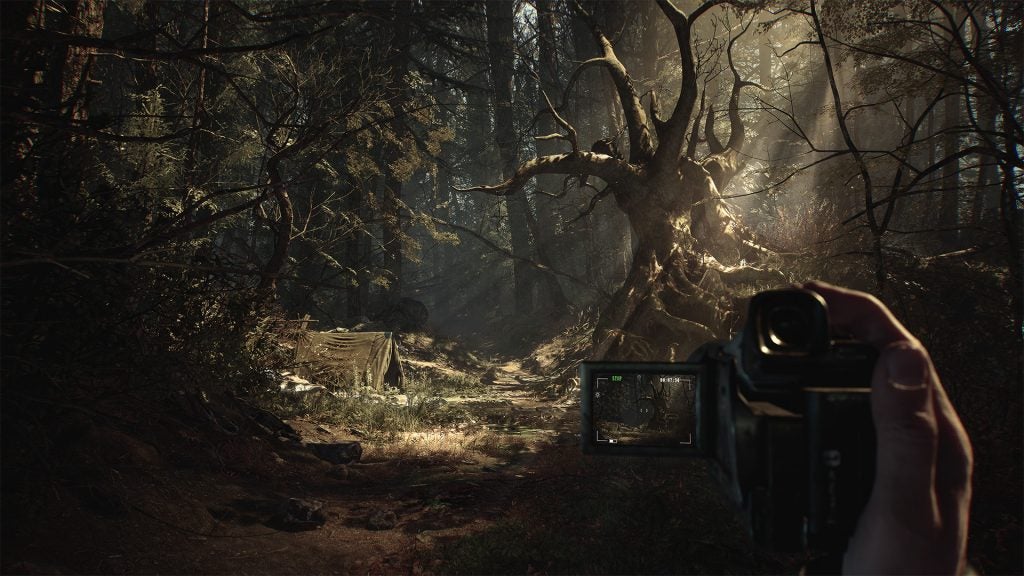 Even in the rare instances of light, Blair Witch never lets you feel safe

However, the story of Ellis remains a compelling one. His past as a soldier in The Gulf War has left some serious mental scars, a condition which gels effectively with how the Blair Witch toys with her victims, trapping them in a world that’s inescapable and never-changing. This leads to some brilliantly inventive visual showpieces that twist a dank, dark wood into a shower of artillery strikes and machine-gun fire. While it works, it’s also a far cry from the subdued elements I come to this series for.

This element of horror is still present though. Exploring the woods with little more than a flashlight, archaic communication tools and your trusty canine companion, Bullet, makes for some harrowingly tense moments.

Seldom do survival horror titles leave you in pitch darkness, but Blair Witch does this frequently, not afraid to abandon the player in a world of absolute helplessness. I’m a scaredy cat, so I sprinted onward, praying nothing was lingering between the trees that flanked my every direction.

Blair Witch’s use of atmospheric sound cues and foreboding environmental music is some of the best I’ve seen in the genre this generation, creating a level of palpable dread that had me cowering behind the controller. Oftentimes, there was nothing to be afraid of, the sound design working its magic as I jumped at shadows and objects peering suspiciously in periphery. When the monsters, ghosts or whatever-you-call-them do appear, it’s when the mechanical inconsistencies also surface.

Bloober Team is definitely ambitious, and has created a halfway compelling method of combat for Blair Witch. You’ll encounter all manner of beasties throughout the campaign, but ethereal monsters are easily the most frequent. These linger in the darkness, and you’ll need both a flashlight and Bullet to hold them back. Bullet will bark in their general direction, and you can damage them by shining your torch right at them. Do this a few times and you’re safe, once again left alone in the woods. 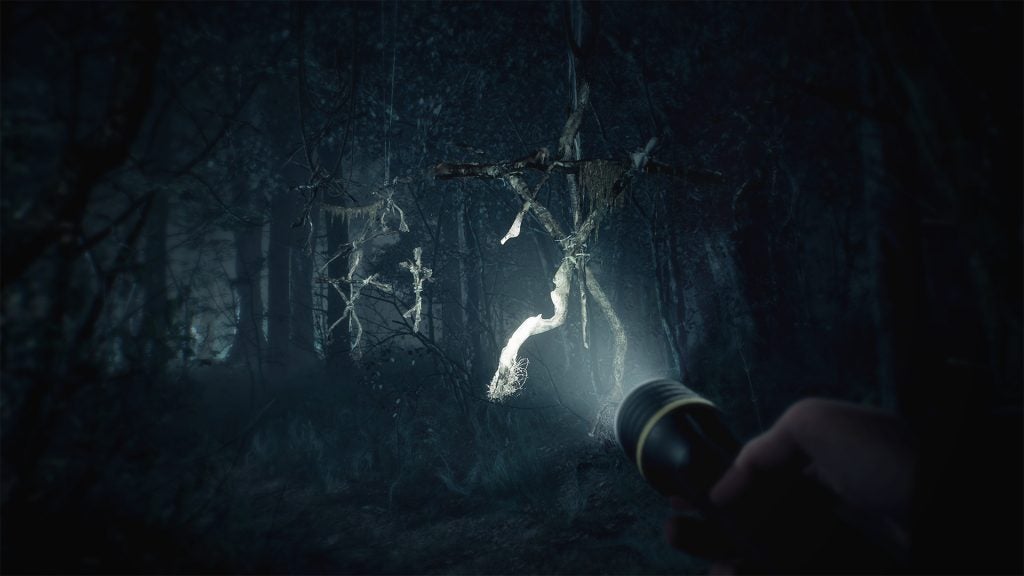 Bullet is a good boy, and can be commanded to stay, follow you or lead the way in search of objectives or hidden items. You can also rub his belly at any time, which is obviously very important. It’s a fascinating mechanic, although selecting options from the cumbersome radial menu is frustrating – especially in the midst of a panic attack-inducing series of scares. Bullet can also glitch into the environment at times, ruining the illusion of this being a living, breathing world of horrors.

Ellis is also in possession of a video camera that allows him to manipulate reality, leaning into the reality-bending elements the new age of Blair Witch leans on so heavily. Tapes are found across the Black Hills Forest, providing context to the game’s events while also presenting themselves as intricate puzzles in their own right. For example, one early tape presented two characters walking towards a tunnel, one of them dropping a baseball in their wake. By holding up the view-finder to the scene in reality, the ball would magically appear.

These situations are enjoyable and, at times, genuinely head-scratching. One occasion had me stumped for ages as I tried to move a fallen tree that was blocking my path. Turns out I was using the wrong tape and the solution was obvious, but I still had fun toying with the environment in ways that make it feel alive. The camera also comes into its own during later encounters which echo the 2016 film brilliantly. As divisive as that movie has become, it did some things right.

Despite being rough around the edges, Blair Witch is a survival horror delight that will no doubt enrapture fans of the long-running franchise. It stays faithful to what makes the mythos so enticing, while pushing it into some unpredictable new directions.

Certain mechanics do feel clumsy and don’t always hit the mark, with controls on console feeling rather unwieldy when combined with inconsistent performance. But with Bullet by my side, I wasn’t alone in the Black Hills Forest, and it’s a journey I’ll happily take again.