The most important question to ask when thinking about buying a BlackBerry Z30 is – can you get on with BlackBerry 10?

This is BlackBerry’s final gasp attempt to offer an attractive alternative to Android and iOS. And it hasn’t proved as popular as BlackBerry hoped. It’s a mixed bag. There are some truly great things about BlackBerry 10, and some real stinky parts.

Let’s start with the good bits. The BlackBerry Z30 is a great phone for messaging, whether it’s through SMS, email, Whatsapp, BBM or Facebook Messenger. 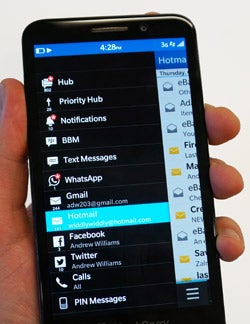 All these things are routed into a single place, known as the Hub. It’s great, probably the most efficient way to keep track of a fistful of social streams we’ve ever seen in a mobile phone, and without any of the unnecessary visual nonsense you’d get from ‘trendier’ phone-makers.

The BlackBerry Z30 approach to notifications is also extremely efficient. On the lock screen, you get a bunch of simple white logos, next to a number indicating how many new alerts there are for each. The BlackBerry system is still perfect for your typical time-poor city dweller.

The BlackBerry Z30’s new BlackBerry 10.2 software adds an extra feature too – Priority Hub. This routes through all communication from places you’ve listed as ‘high priority’. Like your other half, or mother-in-law.

BlackBerry Hub alone makes the Z30 a serious phone to consider for many people. And you can customise it so that it only features bits you need (you can even remove BlackBerry’s own BBM from the Hub).

BlackBerry 10 does take a while to get used to, though. It’s a far more gesture-based system than any of its rivals. For example, you swipe up from the bottom of the Z30’s touchscreen to take it out of standby, rather than pressing a power button, and there are no persistent soft keys, meaning no ‘Home’ button.

Once you’ve un-learned all the conventions adopted by rivals, though, it’s a fairly intuitive system – just a bold and quite different one. 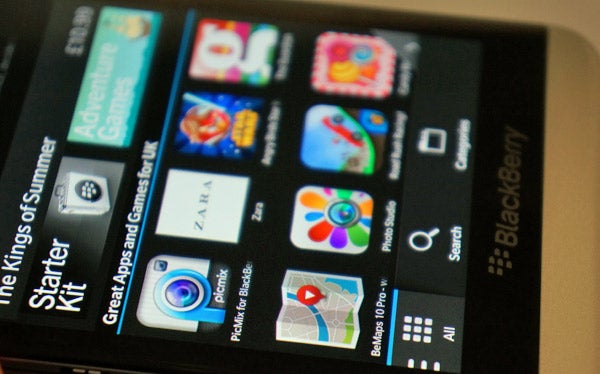 Another top feature of BlackBerry 10 is its smart keyboard. Accuracy-wise it seems on-par with those of the iPhone and Windows Phone systems (the top dogs), and it offers slightly more spaced-out keys than the average. For pure typing alone it’s great, but the BlackBerry Z30 also has the clever predictive text system, which was introduced with the Z10.

As you’re typing, words the phone thinks you want appear above the next letter in the word. The need to fit these in is the real reason why the keys spread out a bit more than competitors. Swipe up (rather than tapping) from one of these keys and the BlackBerry Z30 will insert that word.

Once again, it’s all about gestures and it’s designed for those who have a lot to say, and not enough time to say it. This is an excellent keyboard. 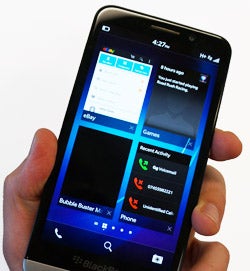 The foundations of BlackBerry 10 are strong, then, but it’s far from a perfect system. For one, it’s not very pretty.

The spare look of BlackBerry Hub is perfect, but there’s a certain stuffiness to the other main areas of BlackBerry 10 – the multi-tasking screen and the apps pages.

BlackBerry 10’s ‘main’ screen is a page of the last four apps you used, displayed as rectangular thumbnails. In our experience, they never look good. Functionally they’re fine, but don’t provide a particularly satisfying front-end for your £500 phone.

The apps menu isn’t much of a looker, either. Its constrained visual style has too much of the sweaty-suited whiff of the up-tight businessman BlackBerrys have traditionally (in popular imagination) been aimed at. That BlackBerry Hub is one of the better-looking parts of the interface, while being little more than text, is an indictment of BlackBerry 10’s lack of visual flair.

However, like BlackBerry 10’s use of gestures – you’ll get used to it.