We were suitably impressed with the web browsing experience offered by the BlackBerry Z10. Its browser is seriously fast when it comes to rendering pages and it offers perhaps the best zoom prediction we’ve seen. Double tap on a section of a webpage and it nearly always zooms to just the level you want. Text doesn’t reflow when you zoom in so there can be a bit of left and right scrolling but you can always flip the phone to landscape for more comfortable reading. Also, sometimes the scrolling isn’t quite as smooth as we’d like, but overall it’s easy to use. 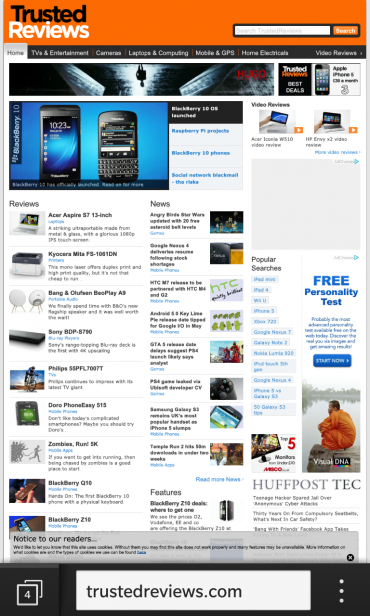 Helping is that the address bar runs along the bottom of the page so it’s quick and easy to access, while tabs are just a tap away, making it easy to keep multiple webpages on the go at once. However, the refresh/reload button being tucked away in a menu is a bit inconvenient.

There is Flash support too, though sensibly it’s turned off by default as Flash can cause phones to become very slow or even crash..

The default Facebook app that comes preinstalled is visually on par with any other offering and is speedy too. However, it doesn’t have the super optimised slickness of the iPhone version and in particular we miss being able to just swipe upwards to exit the fullscreen photo view. Instead we have one of the few moments where an awkward thumb-stretch is needed to reach the ‘done’ button in the top right corner. 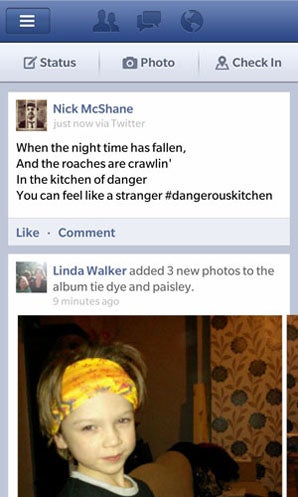 As with the Facebook app, the preinstalled Twitter app is right up there with most rival platforms offering a clean and easy way to view the Tweets of those you follow and Tweet photos, videos or just text right from your phone. 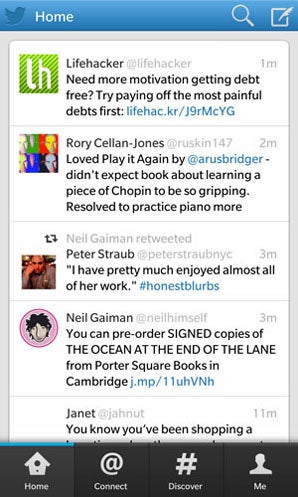 Perhaps the single biggest failing of BlackBerry 10 and the BlackBerry Z10 is its Maps offering. With no other third party mapping services yet available on the app store you have to make do with the in-built maps app and although it has some plus points, it’s not a patch on those offered by Android, iOS and Windows Phone 8. 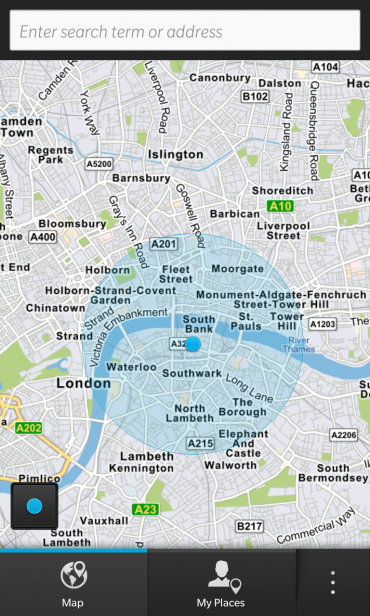 The main concern is that it doesn’t offer any sort of satellite view, and then there’s the fact you can’t rotate the map and nor is there a proper sat nav view.

The main map-style view will just about get you where you need to go but overall BlackBerry seriously needs to fix this quick. The only alternative we’ve yet found is the rather impressive WisePilot app, but this is sat nav rather than mapping in general.

BlackBerry’s app store is called BlackBerry World and, as well as apps and games, in it you’ll find downloadable albums and videos, which makes it quite useful as a one-stop solution for stocking your phone up with digital goodies.

Video prices are rather extortionate at £15.99 to buy most films, but the service is powered by Rovi, which in our experience offers one of the best-quality services of this type. Thankfully music downloads are a bit more affordable at £8 per album, though £1 per song is again a bit much.

As for apps and games, we’re actually quite impressed by the amount that are already on offer with us able to grab a few key favourites such as a London underground map, official national rail enquiries app, the Guardian app, Skype and of course Angry Birds Star Wars – not bad considering the whole brand new platform only launched a couple of days ago. Nonetheless, there are still plenty of holes in the catalogue. For instance, missing were Dropbox, Producteev, GoogleMaps, Evernote, Shazam and the best Rovio game Bad Piggies.