With the law in the UK stipulating that to use your mobile in your car you must have a hands-free kit, you’d think most cars would now come with Bluetooth hands-free functionality built-in as standard, but sadly that’s still not the case. It’s not surprising, then, that you see many people driving around with a headset hanging from their lughole, fiddling with its miniature controls that can be surprisingly distracting to use. That’s why we reckon a visor-mounted speakerphone like the VM-605 is a better option. The question, though, is whether the VM-605 manages to match the likes of the Jabra SP700 and Parrott Minikit Slim in terms of features and usability. 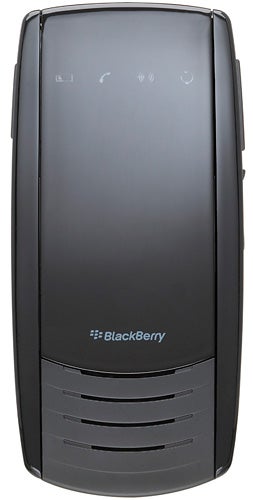 First things first. Although this is a BlackBerry branded piece of kit, under the hood it’s essentially a standard Bluetooth speakerphone so there’s nothing to stop you from using it with any other type of handsets. We carried out our testing mainly using a BlackBerry Curve 8900, but we also tried it with an iPhone and an Acer X960 and it worked without any problems with both.


The VM-605 is actually around the same height and width as a standard mobile phone, but it’s surprisingly slim and light, weighing in at just 86g. As its name suggests, its designed to be clipped onto the driver’s side sun visor using the sturdy metallic spring clip on the rear. This holds the speakerphone tightly in place so it doesn’t move or rattle around while you’re driving. Also, as the device itself is so slim, measuring a mere 16mm thick, the VM-605 is pretty inconspicuous once it’s in place.

Naturally, the VM-605 has an internal battery so it doesn’t have to be kept plugged into your car’s power socket. The battery is a 1100mAh Li-Polymer unit and is charged via the micro-USB port hidden behind a flip-out rubber flap on the left-hand side of the speakerphone. BlackBerry provides a 12v car charger in the box or if you have a recent BlackBerry phone you can charge it using your phone’s wall charger. Either way, it takes two hours to fully charge the battery from empty, which will give you around 10-13 hours of talk time.

You don’t want to have to fiddle with too many buttons when you’re driving so thankfully BlackBerry has kept the controls to a minimum. In fact, there are just three buttons on the device. The front face of the VM-605 pretty much acts as one large button, used to take or reject calls. On the right-hand side you’ll find the volume rocker switch, while the left-hand side is home to the FM button – but more on this later. There’s also a row of four backlit icons across the front of the device to show you call status, pairing status, battery level and whether the FM function is active. Thankfully, unlike those on some other speakerphones, they don’t flash and so won’t district you while driving. 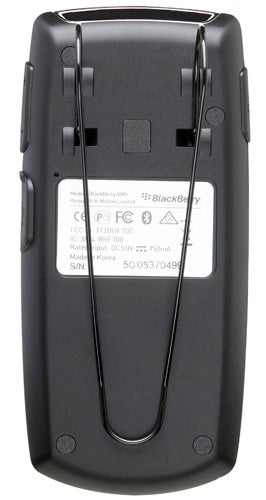 The scarcity of buttons means the speakerphone is very straightforward to use, however you still have to take a peak at the manual to get a grasp of the multifunction nature of the buttons. Despite this, pairing is very easy to set up. With the speakerphone turned off you simply press and hold the main button until the VM-605 announces ‘pairing’ through its speaker. You then do a search for the VM-605 on your phone and enter the usual Bluetooth passcode of 0000. The speakerphone then announces ‘connected’ to let you know that every thing is A-OK.


After that when your phone and speakerphone become disconnected (for example when you take the phone out of your car for a while) and you want to reconnect them again you simply tap the main button on the speakerphone and then select ‘Yes’ on your BlackBerry to have them re-establish the link. It’s quick and easy. 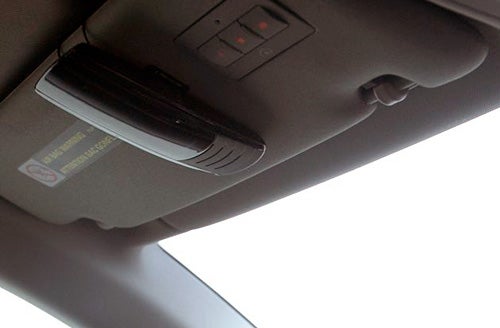 To make calls you have to rely on your phone’s voice dialling feature. With the Curve 9800 this was pretty straightforward. Just press and hold the front button on the speakerphone until a beep sounds. Then simply call out the name or say the number that you want to call and the phone will respond.


With an incoming call the speakerphone announces ‘call from’ and then proceeds to enunciate the full telephone number – sadly it can’t call out the actual names of contacts stored in your phone. To pick up the call, just tap the main button or just press and hold the button for one second to reject it. Similarly, to mute a call press and hold the volume down button for one second. It’s all pretty simple and easy to remember after several run-throughs.

The VM-605’s built-in speaker pumps out 3.3W of audio power, which doesn’t sound like much but is actually quite loud, especially since it’s clipped on a visor that’s sitting within a few inches of your head. As a result, there are no problems hearing incoming callers above engine and general traffic noise. The mic also works well to produce clear call quality for those on the other end of the line, which isn’t all that surprising given the built-in echo and noise cancellation technology. 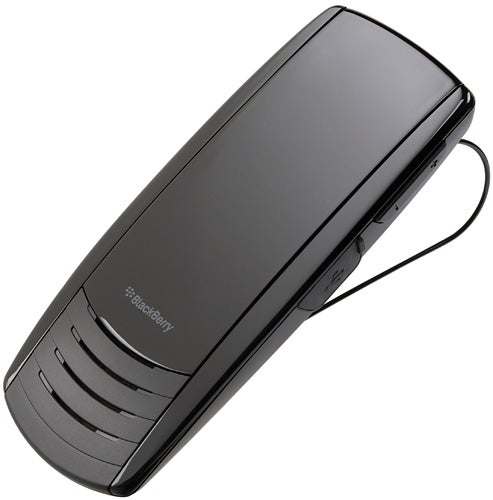 However, as well as using its speaker, the VM-605 has another trick up its sleeve; it also has an onboard FM transmitter so it can send the audio from callers to your car stereo speakers. This works in much the same way as an old iTrip for an iPod. First, you press the FM button on the right-hand side of the speakerphone. The VM-605 then calls out a frequency, which you tune to on your car stereo. If this frequency isn’t very clear you can have the VM-605 scan for another one by holding down the volume up button. It’s an excellent system that works really well in practice, plus it offers the bonus of listening to music or turn-by-turn sat-nav instructions from your Blackberry via your car’s speakers.


If all this sounds familiar, it’s because the VM-605 is strikingly similar to the Jabra SP700 in terms of functionality. They have different external designs, but under the bonnet, we have our suspicions that they may actually be using the same hardware (we could be wrong, though, as we didn’t have an SP700 to hand to make a direct comparison). Nevertheless, there’s little to choose between them except for design and price as both work extremely well and are very easy to use.


The BlackBerry VM-605 is a great little device. It’s easy to use, has good call quality and the ability to pump callers, music and sat-nav instructions through your car stereo is a real boon. However, it is almost identical to the Jabra SP700 in terms of functionality so there’s little to choose between them except price. Currently you can pick up the SP700 for around a tenner cheaper than the VM-605, so if you don’t care about the BlackBerry branding it’s currently the better value option, but of course the price advantage could always swing the other way in the future.