The original Storm was BlackBerry’s first attempt at a touchscreen phone and while it wasn’t a complete disaster it didn’t quite conjure up a whirlwind of adulation either. We’ve known several Storm owners and none of them were overly complimentary about the handset’s long term performance. The main issues were down to the build quality (the side-mounted plastic buttons falling off), the bizarre decision by BlackBerry to not equip the handset with Wi-Fi and the lack of responsiveness from the SurePress screen.


The first of those two issues seem to be solved on the Storm2, but while the new SurePress screen used on this model has been greatly improved, we’re not sure it’s going to prove any more popular than the previous version. 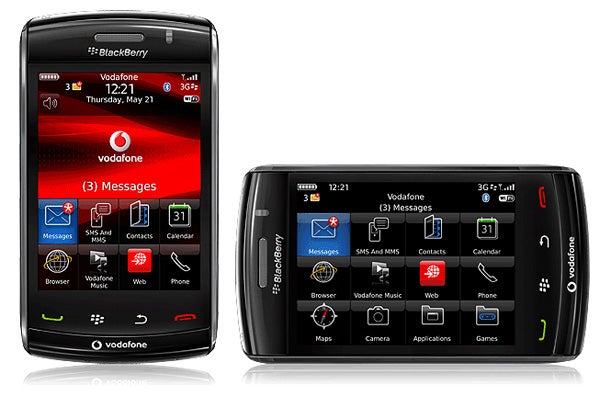 Looks-wise the Storm2 is almost identical to the original, but there are some subtle differences here and there. For example, while the four buttons for answer, menu, back and end are still mounted on the front of the phone, they’re now integrated into the clickable part of the SurePress screen, rather than being separate to it. Also the chrome band that used to run around the outer edge of the phone has now being given a much darker finish so it blends in nicely with the glossy plastic finish that covers much of the rest of the handset (although thankfully the battery cover is still made of metal). Similarly BlackBerry has dumped the plasticky, side-mounted buttons and instead replaced them with rubberised ones that are better anchored into the chassis, which should make them much more durable in the long run. 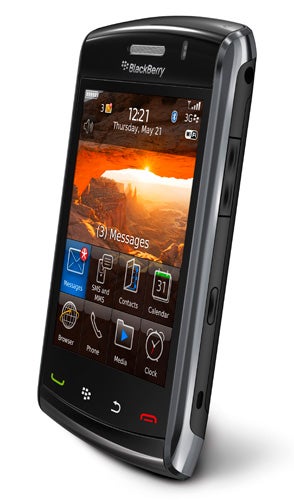 Nevertheless, some niggles with the design remain. Despite having a 3.5mm headphone jack, we don’t like the way the jack is mounted on the side of the handset as it tends to snag when you’re taking the phone in and out of a pocket. Also, the phone feels quite thick and heavy, certainly much more so than the iPhone or Hero.


The handset runs the new BlackBerry OS v5.0, which includes a number of useful additions. One of the best of these is the updated cut and paste functionality. If you want to cut text, say from an email, and paste it into the web browser you now just have to call up the BlackBerry menu and choose Select. This places two selection tabs that you can position to mark the areas of text you want to cut. Although the system is similar to that used on the iPhone the selection tabs are much larger and more finger-friendly so they’re a good deal easier to position. There’s also updated Maps software and you can now access the clock and connections menu directly from the home screen.

As on the previous Storm, this handset uses BlackBerry’s SurePress technology. This basically means that the surface of the screen is clickable like a button. In practice it works as follows: you can select an area or item on the screen by placing your finger on it, but the phone doesn’t action the command unless you physically press down on the screen. BlackBerry has done a lot of work to make the new screen more responsive, as it now uses four ‘click’ sensors rather than the single one that was employed on the original handset. Also the clickable part of the display is now locked in place when the handset is in standby or turned off, so it doesn’t gather as much dust around the edges as before. 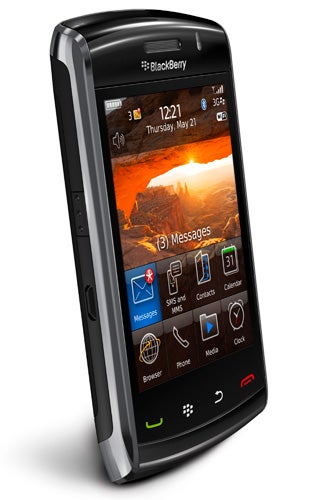 However, it goes without saying that if you’ve used other touchscreen smartphones this clickable display still takes some getting used to and, to be honest, even after using the phone for a week, we still didn’t like it. Firstly, the clicking sensation just feels wrong to us when applied to a touchscreen and secondly it slowed down our typing. For example, we found we could tap out an email faster on an iPhone than we could on the Storm2, which is not great considering the BlackBerry brand is synonymous with messaging. Still, some people may get along with it better than we do, as it does feel slightly more like a physical keyboard than just tapping on a standard touchscreen. 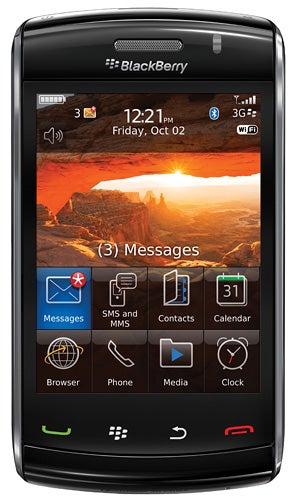 As well as the updated screen, the new model also seems a good deal faster than the original. As far as we know the Storm2 uses the same processor, but BlackBerry has doubled the phone’s main memory from 128MB to 256MB and this seems to have given the OS a bit more room to stretch its legs. For example, it’s less prone to slowdowns and pages are notably faster to load and render in the browser. Along with the increase in main memory, the flash memory used for document storage has also been doubled from 1GB or 2GB.

As with all of BlackBerry’s line-up of handsets the messaging support on the Storm2 is exemplary. Despite being around for such a long time, there’s still nothing really to touch BlackBerry’s push email system in terms of speed of delivery, ease of use and relatively light demands on battery power. Naturally, there are a number of ways you can set up the handset to pick up email, but we used it with a Gmail account and getting this working was a piece of cake – all we had to do was start the email set-up wizard and enter the user name and password. Around 10 minutes later messages were being pushed to the phone. 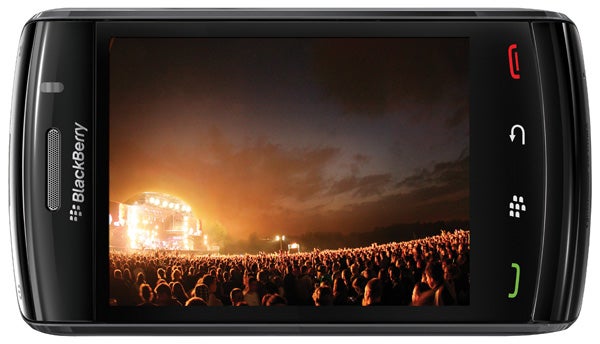 In our experience, the cameras on most touchscreen phones tend to be pretty poor, but the one used here is better than we’ve come to expect. The resolution of 3.2-megapixels isn’t exactly earth shattering, but the camera does at least have autofocus as well as an LED flash to help you take pictures in low-light environments. The camera captures reasonably accurate colours, and as long as there’s a decent amount of light flooding into the sensor, images aren’t too noisy either.


The big news on the connectivity front is that BlackBerry has finally added Wi-Fi support, something that was desperately missing from the first Storm. In other areas little has changed as the handset still has quad-band and HSDPA support. In the box there’s also a software guide to using your Storm2 as a broadband modem for your laptop – something that’ll cost you a fair wad of extra cash if you want to do the same thing on the iPhone. Naturally there’s also Bluetooth 2.1 and onboard GPS. 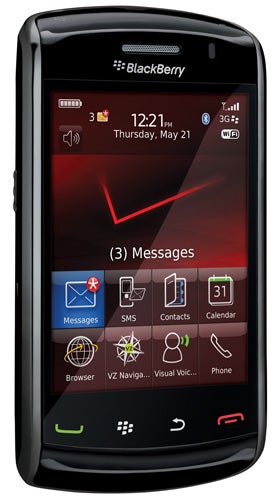 Battery life has always been a strength of BlackBerry devices, but unfortunately the Storm2 isn’t quite on a par with Blackberry’s more traditional messaging devices. We got around two days out of it, which puts it pretty much in line with other touchscreen phones, but certainly not ahead of them. Call quality was first rate, though, so we’ve no complaints in that department.


The Storm2 is a decent update of the original handset. However, touchscreen smartphones have moved on considerably since the Storm first appeared and the Storm2 feels more like a device that fixes faults rather than an upgrade that elevates the Storm into a position where it can really challenge competitors like the iPhone. Perhaps next time around BlackBerry needs to be less obsessed with its clickable screen and more focused on closing the gap to its rivals.