BlackBerry claims it’s taken a very light touch with Android, and hasn’t messed around with the OS’s core code too much – as competing firms, such as Samsung, HTC and Huawei, do with their respective Android skins.

However, this doesn’t mean the Priv is running an untouched version of Android. BlackBerry has loaded the OS with more custom features and applications than can easily be counted.

On past Android phones I’ve reviewed this approach negatively. Firstly, because most of the custom apps and services I see handset makers load onto their phones are useless bloatware, or gimmicks – remember Sony phones’ AR-camera mode?

Secondly, because any change or custom feature the company adds to Android delays how quickly the device can be upgraded to new versions of the OS.

However, with the Priv, I take my hat off to BlackBerry – most of the changes I’ve seen are either unobjectionable or outright useful. BlackBerry’s additions generally focus on two areas: productivity and privacy. 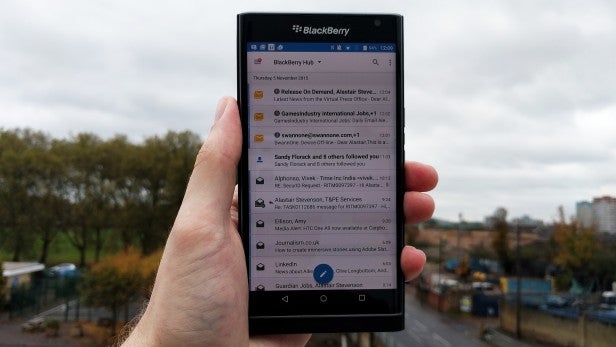 BlackBerry Hub replaces Android’s main email app on the Priv. It works the same way it does on BlackBerry OS and lets you collect alerts and messages from numerous services, including Gmail, Outlook, Facebook, Twitter, LinkedIn and Calendar into one place. It also boasts filtering options that let you control which account is displaying at any one time.

Pop-up widgets are accessed by flicking up from the applications’ shortcut icons. They let you set specific peak views to certain features.

For example, on Twitter you can set them to show incoming messages, or mentions, while on email you can use them to bring up a peek view of a specific folder.

The productivity tab is one of a select few features that tries to take advantage of the screen’s curves. It’s accessed by swiping left from the phone’s long right-hand edge. It features customisable shortcuts to four applications. Out of the box these include the Hub, Calendar, Tasks and Contacts apps, though you change them to whatever you want.

When pressed, each shortcut pulls in and displays information it thinks is relevant to you. For example, the Calendar icon will bring up approaching appointments, while the Contacts icon will show people it thinks you want to call or message.

Each of the additions may not sound game changing, but combined they manage to make Android more efficient to use.

The Hub made it way easier for me to keep on top of incoming messages and alerts from my numerous social media and email accounts.

Similarly, within a day of using the Priv I found myself using the widgets ahead of Android’s native notifications tray to check incoming alerts and opening up the productivity tab when I quickly needed to find a contact’s number.

Bolstering Android’s privacy controls was a key goal for Google with its latest Android Marshmallow upgrade. The update added robust privacy controls that force applications to ask permission to access different data reserves on a case-by-case basis, rather than present you with one all-encompassing request.

The feature is a massive improvement that forces apps to be more transparent about what data they’re collecting and is a key reason I’ve begun penalising phones that haven’t been confirmed as getting a Marshmallow update. 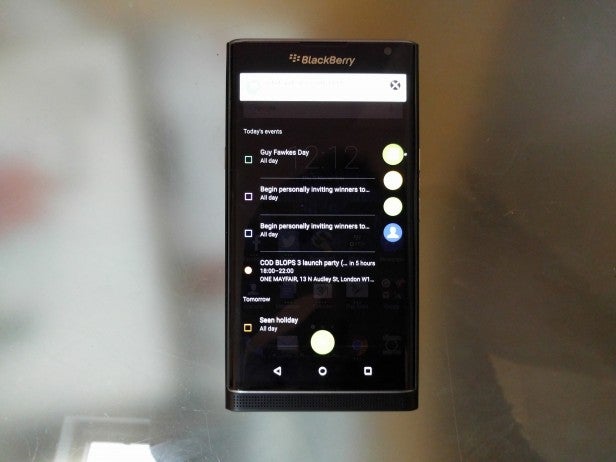 Putting aside the fact that BlackBerry’s confirmed the Priv will be upgraded to Marshmallow “early next year”, the Priv’s custom privacy controls are themselves pretty awesome, building on BlackBerry’s legacy as an enterprise security services provider. The firm’s worked hard to simplify how permissions are displayed and managed, so anyone can use them.

The privacy features are controlled via a central DTEK application. The application at a basic level tells you how secure your device is via a sliding arrow.

Underneath the arrow are shortcuts to key items that will help you improve the phone’s security, or monitor and adjust its privacy controls. I was particularly impressed by DTEK’s privacy features, which show a full list of all the installed apps, with icons telling you what data they’re accessing.

The controls are much more transparent than Android Marshmallow’s native privacy settings, which are hidden behind several sub-menus and make it even easier for me to control what personal information I’m giving away.

My only issue with the Priv’s software is that it can be a little too aggressive at pushing BlackBerry services. Within seconds of powering the phone up I was flooded with notifications telling me I should try out BlackBerry Messenger and use the Hub instead of the email app.

From there I was hounded by the alerts on a near hourly basis. This is fine if you’re happy using BlackBerry’s add-ons, but it’ll be annoying if you want to stick to Google Android’s in-built services.

The Priv is powered by a hexa-core Snapdragon 808 CPU and 3GB of DDR3 RAM. These specs are nothing to write home about in the £500-plus smartphone space, where octa-core processing is currently all the rage – not that the number of cores means much anyway.

Running the Priv through our standard set of benchmarks, I was surprised to find it didn’t even match the scores of phones close to £200 cheaper. The Priv ran in with a 34,166 Antutu score and 2,502 multi-core score on Geekbench. On the gaming-focused 3DMark Ice Storm Unlimited test it ran in with a disappointing 13,943 score.

The scores are well below what I’d expect from a £500-plus smartphone. However, with real-world use I didn’t find much to complain about. Probably 90% of the time the Priv ran hassle-free and was more than fast enough for web browsing, video streaming, document editing and 3D gaming. 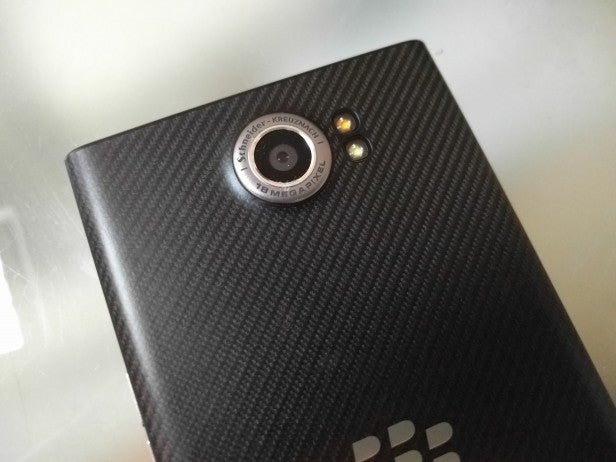 However, on a few occasions it would decide to randomly heat up and throttle performance. The first hot flash happened when I was playing Riptide GP2 and didn’t cause me much concern – plenty of phones heat up during prolonged gaming sessions.

But after a week with the device I realised the hot flashes are far more random. On one occasion it inexplicably heated up while I was checking Facebook, only to act up again when I was listening to music with it in my pocket.

Being fair to BlackBerry, the hot flashes occurred very rarely, but I found them troubling nonetheless – especially when it decided to heat up in my pocket while near sensitive areas…