The recent BlackBerry PlayBook 2.0 update brings with it a host of significant upgrades, that finely give RIM’s little 7in tablet some key features it should’ve had from the start. So, we slapped the update on our review sample and took it for another spin to see if the PlayBook at its new £169 price suddenly makes for a genuine tablet rival.

Before we kick off, it’s worth clarifying why we haven’t simply updated our original PlayBook review. Its general policy that we don’t update old reviews as it’s simply not practical to do so for the volume of products we review. There are exceptions, like when a price falls suddenly soon after launch, but generally we don’t. Another reason is that it’s useful to keep reviews as reference points for how that product stacked up against the competition around at the time – useful for buying second hand. So, if you want the full low down on the PlayBook’s hardware and core software features, check out our original review. Otherwise, read on… 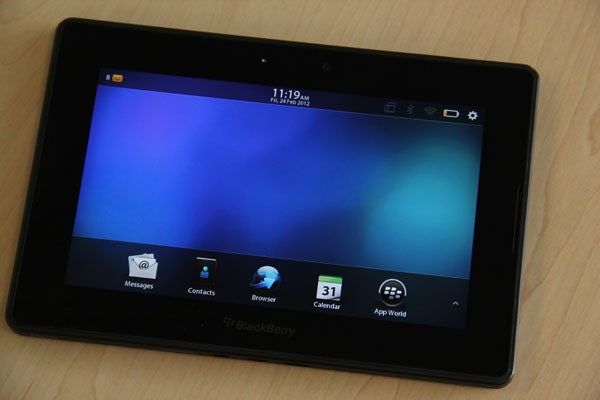 With the simple over-the-air update applied, the first changes you’ll notice to PlayBook 2.0 are simply some visual tweaks. The red swirly default background of old has been replaced by a green and blue one, giving the device an immediately different look. Also, the app launcher that runs along the bottom (or that with a swipe fills the whole screen) has now lost its All, Favourites, Media and Games folders, with you instead able to define your own folders by simply grabbing apps and dropping them on top of each other, just like on the iPad. Yes, it’s a blatant copy but it does work well. 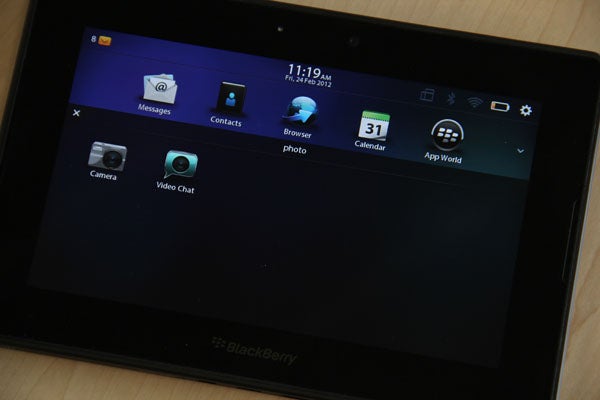 Once you open then minimise an app, the app windows are now larger and have proper icons in the bottom left corner, making it easier to tell which is which.

Another core change is to the keyboard which now has word correction and next word prediction, making for much quicker touchscreen typing. Simple little shortcuts such such as double tapping space to add a fullstop and space have also been added. The tweaked layout also brings oft used symbols within easier reach. All told, the whole experience feels more streamlined, more intuitive and that bit more refined. 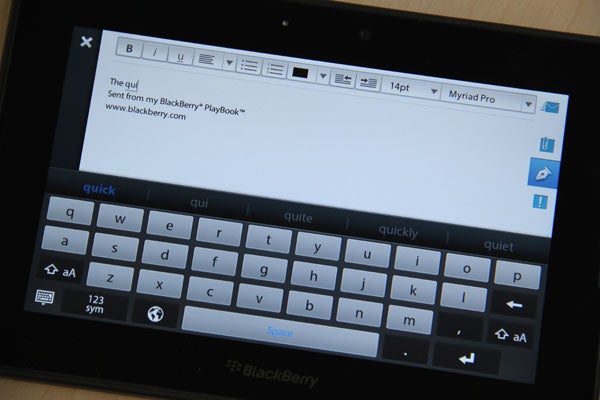 The big changes, though, are the introduction of email (yes, the original PlayBook firmware didn’t have an email app), contacts and calendars, along with a load of accompanying social network integration.

Looking at email first, it actually falls under the catch all Messages app, which also displays Facebook, Twitter and LinkedIn messages. Each of these you can either look at separately or combine into a single inbox view. 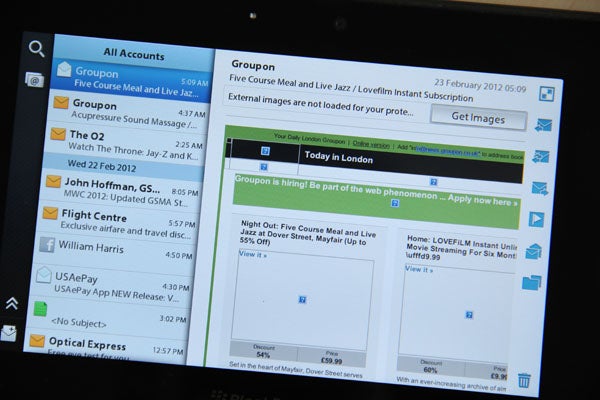 Overall, it’s a superb messaging app, providing easy navigation of your different accounts and message lists, and presenting each message neatly. You can pinch to zoom and scroll round each email, and fullscreen them for an easier view. We particularly like the buttons for replying, forwarding, deleting and the like that sit along the right edge – a design motif common throughout a number of the inbuilt apps. 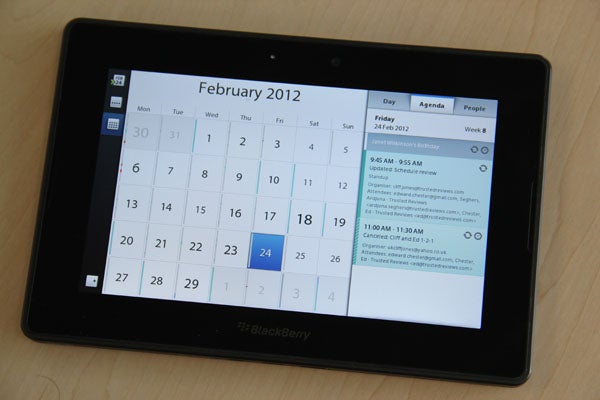 The Calendar app is also superbly presented with very clever use of shading and colouring to show at a glance what’s what. We particularly like how the monthly view shows a visual summary of how busy each day is using a coloured bar alongside the date. Tap a day and it opens in the right hand column with options for an agenda style view or a chronological one, and you can even see which of your contacts are involved in your day’s activities. It all syncs with your email and social networking accounts, so will show things like friend’s birthdays pulled in from Facebook. 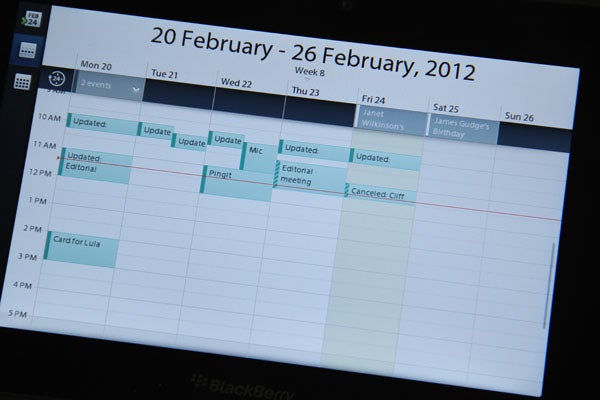 There is a downside, though. Although you can add oodles of accounts, you can only pull in one calendar per account. So if like us you have five Google Calendars on the one account, you’re a bit stuffed.

Contacts, on the other hand, really can’t be faulted. It’s easy to setup, with just a quick login to your various email and social network accounts required, and again beautifully presented. The same layout is used as for email with the main list on the left, details presented on the right and tabs/buttons for actions along the right edge – drag down from the top of the screen and you also get further options. What makes the app so impressive is its comprehensive integration of social networking and info from other services. You can pull up Facebook and Twitter updates, check what meetings you may have together, check for shared locations, check connections in LinkedIn. 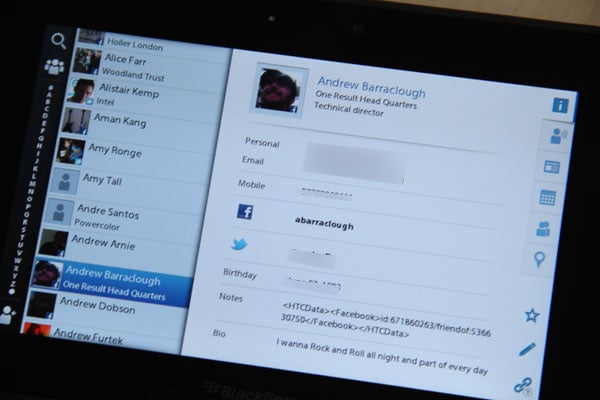 Further features include Print To Go, which allows you to securely ”print” documents from your computer to your PlayBook, allowing you to read them as PDFs while out and about.

There’s also an easy to use Video Chat application (though it’s only compatible with other BlackBerry devices) and much improved Documents To Go implementation that lets you create and edit word and excel documents, as well as edit powerpoints. 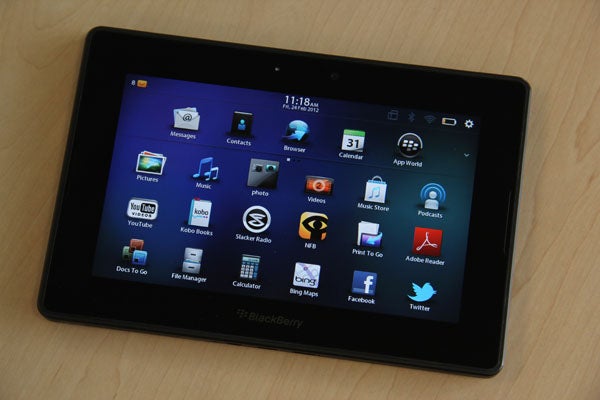 However, the really big deal is the addition of BlackBerry RunTime for Android, which lets Android developers very quickly and easily port there apps to work on the PlayBook. This has already apparently lead to thousands more apps being added to the BlackBerry App World. 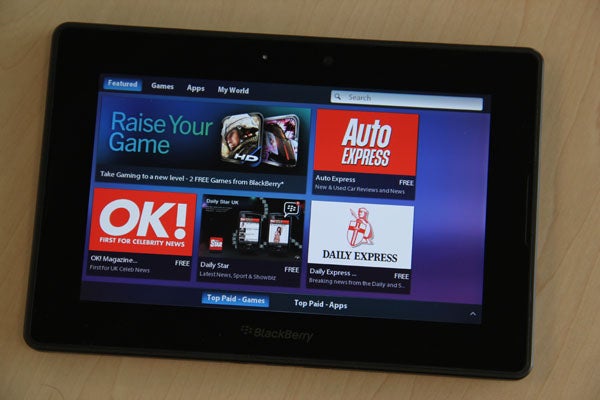 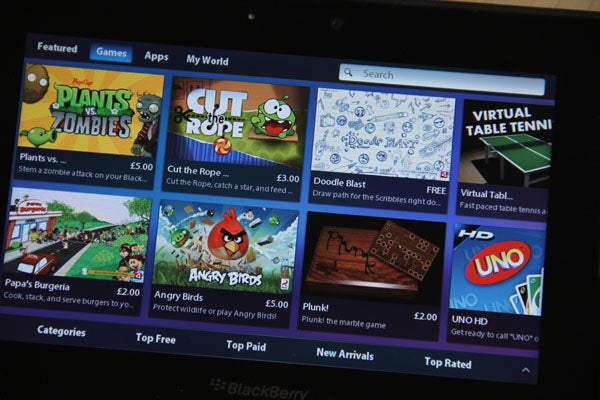 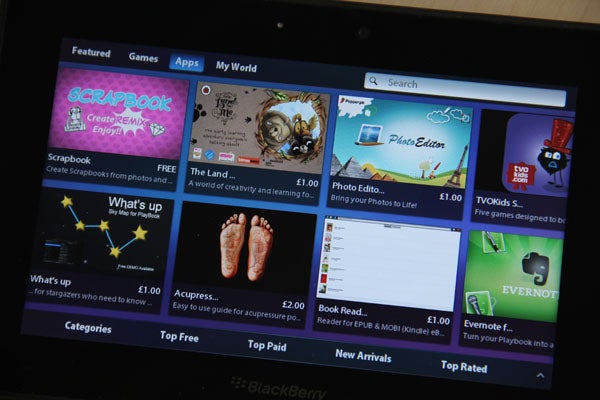 While we’ve no doubt this is true, and the number of apps will grow quite rapidly, a quick search for some classics like The Times, The Guardian, Dropbox and Spotify all drew blanks. We did find both OK! Magazine and NME, though. Apps are also a bit expensive with Cut The Rope being £3 and Plants vs Zombies being £5. At least you can get Modern Combat 2: Black Pegasus HD, Asphalt 6: Adrenaline HD for free at the moment.

Perhaps the most exciting part of the whole apps deal, though, is that you can manually add Android apps. The procedure is as follow: 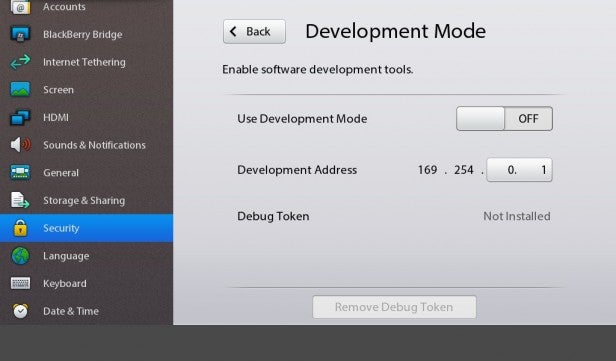 -On your PlayBook, head to Settings > Security > Developer Mode and switch Developer Mode on, entering a memorable password.
-The PlayBook homescreen should now have an icon of a person. Tap this and make a note of your device’s IP address. 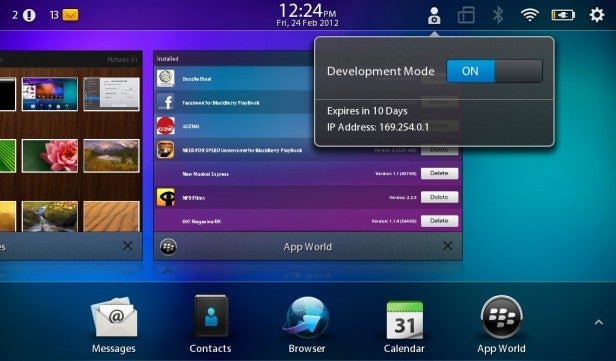 -Now you need to find some apps. These you can download in the form of .bar files. Most
free Android apps are available and you can even such gems as DropBox, GoogleMaps and the Kindle app.
You can just google for specific apps or sites such as
goodereader.com and
CrackBerry.com also have comprehensive lists of working apps.

-Next, plug your PlayBook into your PC, ignoring any windows that pop up. Then run the DDPB Installer. 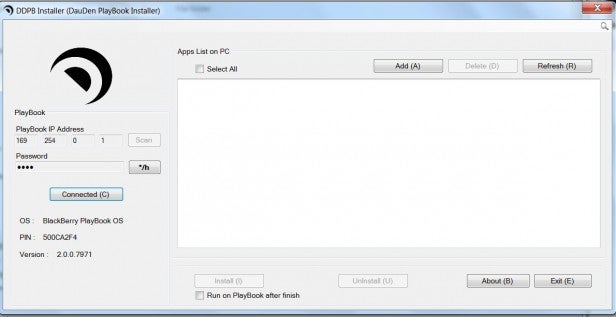 -A window will appear prompting you to enter that IP address and password from earlier. Once done, click ‘Add’ and go find you .bar files. 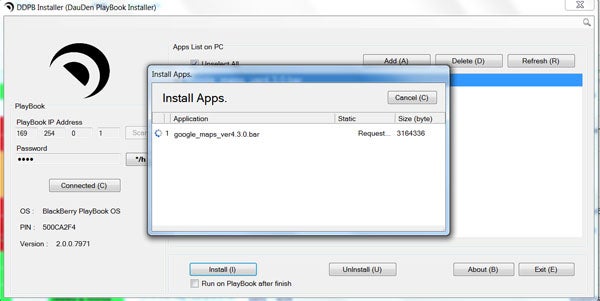 -Once added your apps should appear in the grey box. Select one and click install. A few moments later you should miraculously find your new apps appearing in the PlayBook’s main app folder. Enjoy! 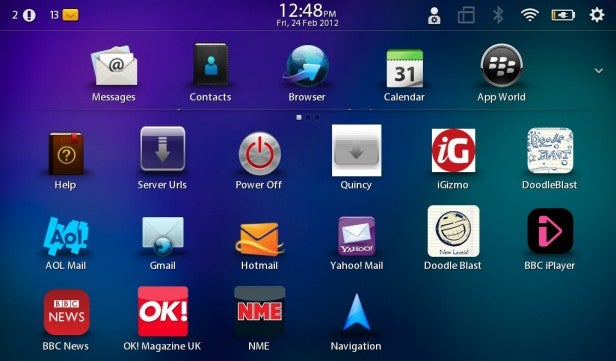 Despite this ability, there remains a lack of apps for the time being. Moreover there are still a few oddities with the PlayBook that although they’re not enough to damn it entirely, they don’t exactly help the cause.

Speed, is the first issue, with apps sometimes taking quite some time to load or update. This can be very variable, and most of the time it is responsive but every now and then it can have a really tizzy. 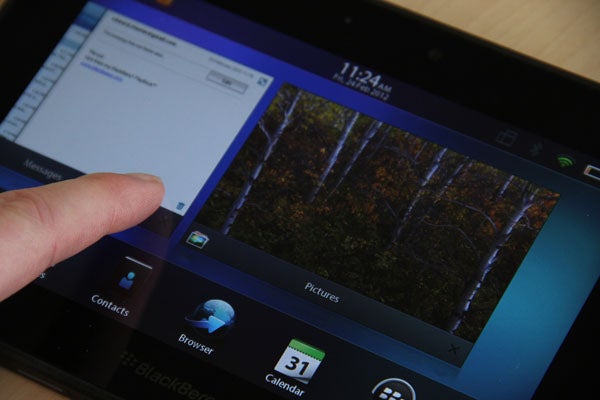 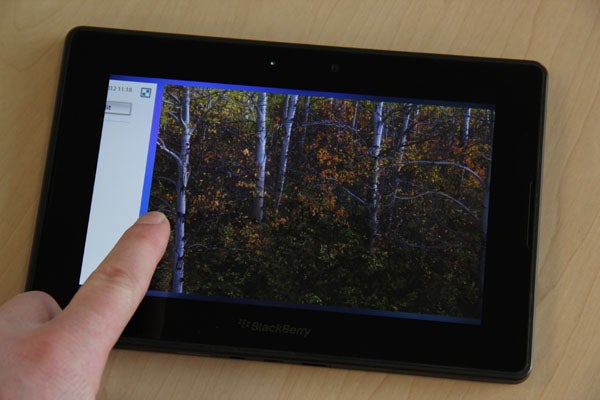 Other niggles include some of the general navigation gestures. The main culprit is the swipe gesture that moves between open apps when they’re shown as windows on the desktop. The lightest of swipes can cause the whole list to move way further than you expect, so you constantly over shoot the app you want. Also, the gesture that moves between fullscreen apps is annoying as it can be invoked when you simply want to interact with the app you have open. The most obvious example of this is when swiping left and right through pictures where it’s all too easy to occidentally swipe too close to the edges of the screen and find yourself moving to another app.

”’Verdict”’
So what’s the final verdict on the PlayBook and its 2.0 update? Well, at £169 BlackBerry has certainly got the pricing right, and with those essential features like email now onboard, it can only be considered a bargain, even just as a glorified portable video player and web browsing tool. However, it still remains to be seen if that app support will arrive to make this and future BlackBerry tablets genuine competitors with the iPads and Androids of this world, or if it’s all too little too late. Still, to get the same quality of hardware, you’re looking at spending nearly double the price of the PlayBook, and we might be tempted to pocket the difference. £169 buys you a lot of e-book reader, mp3 player, Blu-rays, games…