BlackBerry 10, which is now 10.3.1, is in a better state than it was when it first launched. It clearly borrows some ideas from Android and iOS, but it adds plenty of its own, too.

There’s multiple homescreens just like there is on Android and when you swipe left, you’ll see all of your apps. Swipe right and you’ll find the BlackBerry Hub, a place where all of your messages, emails, BBM chats, social network interactions live. If you don’t want to have this information unified, there are filters to break it down though. You can swipe down from the homescreen to see an Android-style notification panel and swiping up while in any program takes you back to the homescreen.

Our favourite feature is the ‘Recent’ apps-style homescreen where you can quickly resume using apps — it makes accessing recent apps quicker than on rival systems. Even the Siri-rival BlackBerry Assistant is very responsive and accurate. BlackBerry 10 doesn’t do anything hugely innovative, but the basic operating system is solid. The larger problem is apps and here BlackBerry attempts to piggy-back on Android. 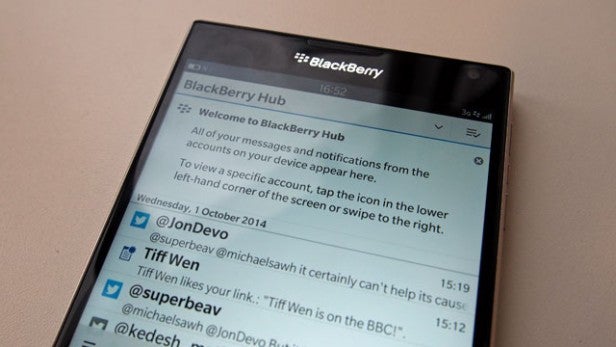 One of the biggest changes in BlackBerry 10.3 is the introduction of Android app support via the Amazon Appstore. It’s no surprise to see that it’s the Amazon Appstore as opposed to Google Play Store. While it doesn’t have as many apps as the Play Store, it’s a more regulated store front and should provide a more secure solution to giving users access to more apps.

Unfortunately, it does require jumping through a few more hoops to get those apps onto your phone. It takes three or four more steps of authorizing and accepting before you can actually use them. The problems don’t end there, either. Many of the apps are not optimized for the Passport and some games simply don’t seem to work properly. It’s a bit of a mess really, which doesn’t do much to mask the lack of native third-party apps.

This is a phone for work, of course, and BlackBerry wants the Passport to play nice with all of your other productivity devices like laptops and tablets. To do this, you need to download and install something called BlackBerry Blend. It’s free to download as an app on Android, iOS and Windows devices as well as offering a desktop application for Mac and Windows use.

Once you’ve installed it, logged in with your BlackBerry ID and paired over Wi-Fi or using the supplied charging cable, you’ll be presented with a Hub where you can view the same information as you can in the BlackBerry Hub on your phone. It also makes it easier to drag and drop files between the phone and laptop, which is useful when you need to grab something to tinker with on the way home. It’s not revolutionary, but it works well and the Passport is better off for it. 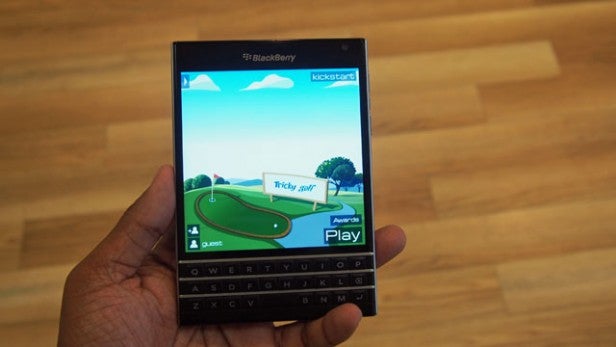 There’s no signs of struggle for basic navigation and launching applications, although it did take a substantial amount of time before we could get into the initial setup. This aside, the extra RAM clearly helps manage multiple tasks and you’ll have no problem jumping from one app to the next.

For gaming, there’s an Adreno 330 GPU, although it doesn’t deliver entirely lag-free gaming. Android games show more signs of a struggle, likely because they’re being emulated rather than running natively.

We couldn’t run the benchmark tests as the ones available on the Amazon App Store were not compatible. What we can say is that it’s well equipped for typical work tasks, but this is not something you want to be gaming on.