What is the BlackBerry Passport?

The BlackBerry Passport is a square smartphone aimed at what the Canadian company is calling ‘serious business professionals’. That’s the type of person who spends the majority of the time on their phone churning out emails, jumping into conference calls and loudly arranging power lunches. At least that’s our take on it.

Aside from its most obvious design quirk, the Passport has a physical keyboard to appeal to loyal BlackBerry phone fans, a huge battery to keep you working longer and it runs on the new BlackBerry 10.3, which now includes support for Android apps via the Amazon Appstore. But, sadly, the Passport is a phone of almosts. It almost makes working on the move great, but there are serious flaws you’ll find it hard to ignore. 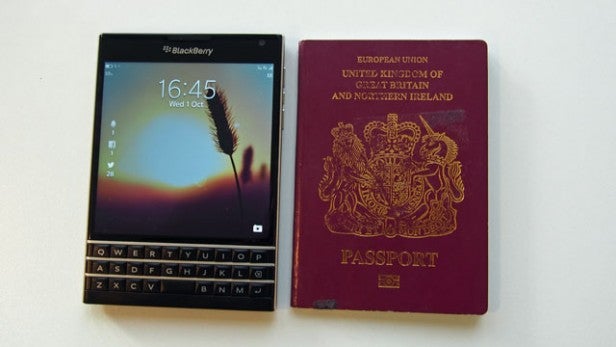 That quirk we mentioned is that this is an (almost) square phone. Rightfully, it sounds ridiculous but BlackBerry believes there’s method to the madness. The Passport has the same profile as an actual passport, although at 9.3mm thick it’s noticeably chunkier.

The extra width is aimed to give you more room to work on spreadsheets or documents without having to zoom in and out of the page. We can’t say we’ve had great difficulty reading emails and doing some work on the Galaxy S5 or a iPhone 6 (even less on the huge iPhone 6 Plus), but there’s some value in BlackBerry adopting this approach. It doesn’t, however, make up for the fact that a wide phone makes for a supremely cumbersome and awkward phone to use, especially in one hand.

Going for a more angular look over something that curves like the Q5 means it’s a real stretch to hold. Weighing in at 190g, it’s not light either and there’s always the fear you could drop it if you don’t grip it in two hands. The square design means putting it in your trouser pocket or inside suit jacket pocket doesn’t leave room for much else. 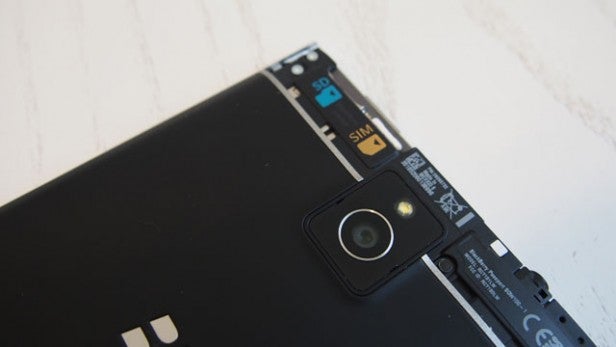 The combination of the stainless steel frame and soft touch matte plastic gives it a serious, albeit stuffy look. Nothing looks quick like it. It doesn’t match the HTC One M8 or the iPhone 6 for sleekness, but it’s very much in line with previous BlackBerry phones. It’s not flashy, but it is solid and well made.

The quirks, however, do not end with the square body. While the on/off button, headphone jack and volume buttons all seem reasonably positioned, there’s a button in between the volume controls that would make more sense being used as the standby button. Instead it actually controls activating BlackBerry Assistant and muting music.

If you want to find the microSD card and Nano SIM card slot, these can be found behind a securely fastened compartment at the top of the phone. Completing the layout is a micro USB charging port at the bottom of the phone.

If there was one thing we thought
BlackBerry would get right, it would be the keyboard. This is what has
made BlackBerry phones in the past a great place to hammer out emails,
BBM messages and texts. With the Passport, BlackBerry has made the odd
decision to drop the usual four row physical keyboard layout in favour
of just the three rows plus a capacitive row just above. It doesn’t work.

The on-screen
row can adjust depending on what’s on the screen, displaying numbers,
grammar and additional characters. Swiping down on the capacitive row
can also quickly adjust layout, but it can be fiddly.

BlackBerry
claims you’ll make fewer mistakes on this keyboard than rival phone
keyboards. While that may well be the case, it’s not going to be
quicker. Moving away from a full physical keyboard breaks the fluidity
of typing and even after more than a week with it, we’ve struggled to up
the pace. 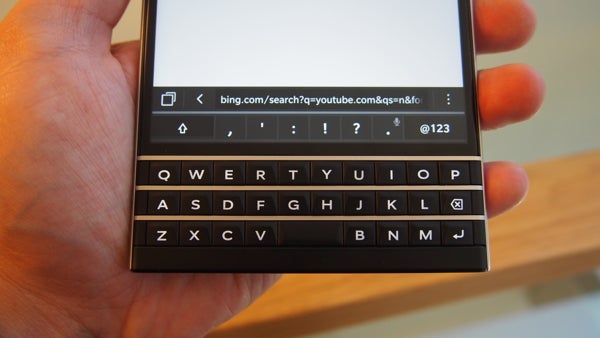 Typing position makes it difficult as well. It’s near impossible not to rest your little finger underneath the bottom edge of the phone when typing in two hands and that can quickly become uncomfortable.

It’s such a shame because the keys have that nice, clicky responsive feel and the touch enabled functionality means you can slide your fingers across the keys to effortlessly scroll through web pages.

We would have happily sacrificed some of the screen space to have another row of physical keys and typing on the Passport would have been so much better as a result. 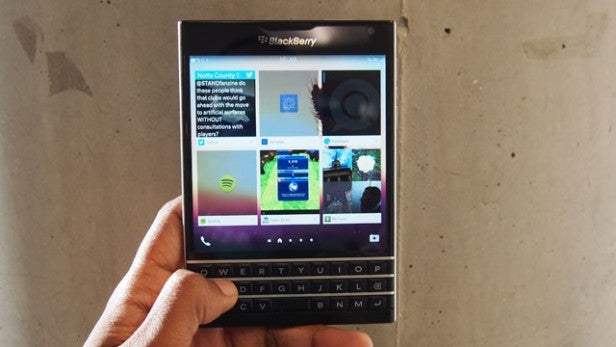 The Passport has a unique 1,400 x 1,400, square screen with an impressive 453ppi pixel density. That means it squeezes in more pixels than the iPhone 6 and as a result web pages and documents are clear and easy to read. It’s not the brightest display we’ve seen, but it works well in bright light. Contrast and colours are strong, too, so photos and videos look rich and lifelike.

There’s some basic display adjustments you can make with colour saturation and white balance, too, the latter of which definitely needs to be played with out of the box because whites are not as good as they can be.

Another positive is that the Passport uses Gorilla Glass, the same protective coating you can find on Android phones like the Moto G and the Samsung Galaxy S5. It’s another feature than ensures this is a touch phone that’s unlikely to suffer from the occasional drop.

This square aspect works well for work, but as soon as you start thinking about using the screen for more fun things like watching YouTube videos, it becomes a problem. A 16:9 ratio video is clearly not a good fit, which means you have to contend with big black bars at the top and bottom of the screen. You do have a screen rotation option, but that hardly fixes matters. If you stick to work as opposed to play, this is a good screen, but it has obvious limitations.