What is the BlackBerry KEYone?

The KEYone is the latest handset from former smartphone heavyweight BlackBerry. It aims to offer the classic BlackBerry keyboard experience to old-school folks who remember the original Bold.

Paired with the cutting-edge Android Nougat OS and the best battery life I’ve seen on a handset this year, the KEYone essentially achieves this goal and is a solid choice for hardcore BlackBerry fans hankering for a decent work handset.

However, I’m not convinced the keyboard will be enough to win over the iPhone and Samsung Galaxy generation who grew up on touchscreen devices, especially given the KEYone’s fairly hefty price tag.

The KEYone feels distinctly like a classic BlackBerry phone straight out of the early 2000s. It combines design elements from the company’s first Android phone, the Priv, which featured a slide-out ‘smart’ keyboard, and the newer DTEK60, which was a pure touchscreen phone.

The end result is a handset that looks a little like a stretched-out BlackBerry Passport, where the keyboard sits beneath a rectangular touchscreen. The aluminium chassis and textured back cover continue the KEYone’s retro feel but will divide opinion.

Showing the handset to a family friend’s teenage kids, the duo’s reaction was a PG-13 “what the (fudge) is that?” But an older relative who spent most of her career bashing out emails on QWERTY BlackBerry keyboards all but squealed with glee when I demoed the KEYone to her.

As typing experiences go the KEYone’s keyboard is one of the best I’ve tested, featuring solid autocorrect and a nifty flick system that lets you quickly accept on-screen word suggestions. I’m not convinced that younger buyers raised on touchscreens will be able to type faster, however. After a solid week using the KEYone I still found using the physical keyboard a little odd and had to think about what I was doing more than I’d like. 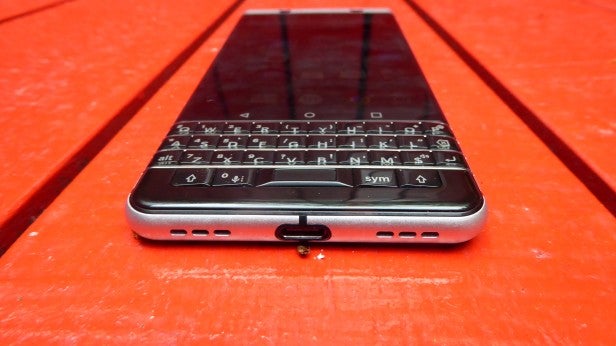 With prolonged use I can see it being great for power users who have to edit lengthier documents on their phone. This is mainly because the backlit ‘smart’ keyboard features the same gesture touch tech as seen on the Priv, which lets you use it as a trackpad. The feature is a boon that gives you much greater control over the cursor when selecting text.

The ability to program shortcuts into each key as well as a special programmable ‘action key’ on the phone’s right-hand side is another useful touch. The shortcuts are activated with either a short or long press and are great for people who want to quickly activate or launch regularly used applications and services on the fly. I set specific contacts to keyboard keys, making it easy for me to quickly call them without having to search through my phone book, for example.

Despite looking retro BlackBerry’s also managed to load the KEYone with all the kit and connectivity you’d expect from a 2017 flagship.

The keyboard’s space bar key comes loaded with a fingerprint scanner, which during my tests proved reliable and the use of a USB-C port and Qualcomm Quick Charge 3.0 tech ensures it should match rivals for data transfer and charge speeds.

Build quality is solid, though the textured back is a smudge magnet and the KEYone easily survived an accidental encounter with a rampaging toddler with a penchant to chew or throw everything.

My only qualm with the KEYone’s design is that the keyboard leads to some pretty serious trade-offs for regular users that primarily use their phone for entertainment. The addition of the keyboard and all the clever tech inside means the KEYone is pretty chunky, measuring in at 9.4mm and weighing 180g.

The dimensions aren’t terrible, especially as the keyboard means 90% of the time you’ll be using it two-handed, but it does make the phone feel much more like a phablet, despite it only having a 4.5-inch screen.

The bigger issue is how the keyboard affects media consumption and gaming. Putting aside the fact that the keyboard reduces the screen size, the way it juts out of the bottom makes playing games, which are generally designed to work in landscape, a little awkward. 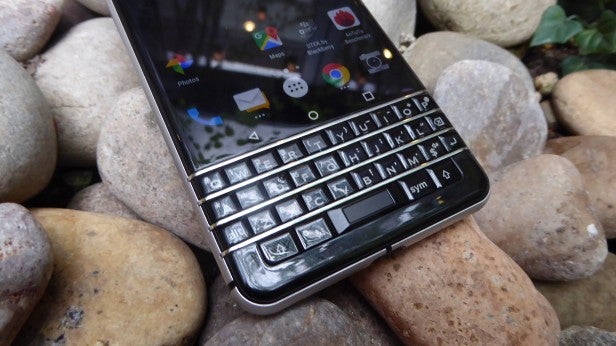 The 4.5-inch screen’s 3:2 aspect ratio is another minor issue that makes some applications, and particularly video content, look a little odd.

Outside of this the screen is pretty good. The 1620 x 1080 resolution gives the display a crisp 434ppi (pixels per inch) density, ensuring text and icons look uniformly sharp. The IPS panel also offers suitably clean whites and, although the blacks aren’t as inky as on AMOLED phone screens, such as the Galaxy S8’s, they’re suitably deep. Colours are also reasonably good and don’t look too cool or overcooked.

The only minor negative is that viewing angles aren’t quite as wide as I’d like on a phone in the KEYone’s price bracket, though considering the fact most people won’t want to use it to watch movies or TV shows, this is a minor quibble.