What is the BlackBerry DTEK50?

BlackBerry has seen its influence rapidly decrease over the past few years, but I retain a soft spot for the company’s devices. I was a fan of BlackBerry’s first Android phone: the Priv may have been rather big and bulky, but it benefited from clever software features and a nice-ish keyboard.

It appeared to be BlackBerry conducting an experiment, to see whether or not people were still interested in physical keyboards. It turned out that they probably weren’t. As a result, BlackBerry’s follow-up ditches the keyboard and slips below the Priv on price. The DTEK50 showed promise, but it’s hugely let down by slow performance and terrible battery life.

With competition from the likes of the Moto G4, OnePlus 3 and Vodafone Smart Platinum 7, the BlackBerry DTEK50 ‘s issues will make it a difficult sell.

The BlackBerry DTEK50 isn’t an original design. In fact, it isn’t made by BlackBerry at all – the Canadian company has opted to save costs by basing its latest device almost entirely on a reference design by TCL, the parent company of Alcatel OneTouch.

As a result, the DTEK50 is basically a rebranded Alcatel Idol 4. Vodafone went down a similar path with its Smart Platinum 7, which is a slightly tooled up Idol 4S. It’s fair enough that BlackBerry doesn’t want to plough huge sums of cash into designing and building its own phone, but it almost suggests the company is tentative as it knows the device is doomed to fail. 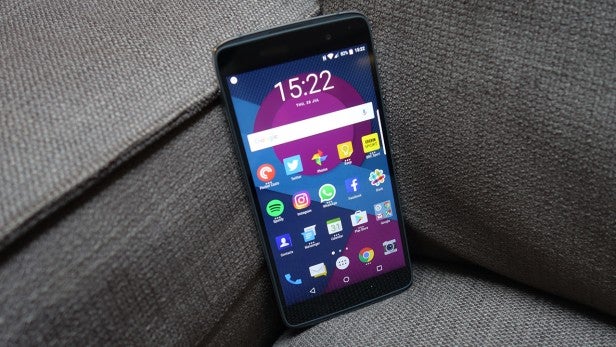 Design-wise the DTEK50 is one of the dullest phones I’ve seen in a long time. It’s your typical black slab of plastic, with a dodgy faux-metal chamfer running around the edge. It’s neither eye-catching nor pretty, and it doesn’t have that feeling of durability seen with the Bold or Curve. Those phones were dense; the DTEK50 feels as though it might implode if dropped on a hard surface.

Above and below the display are speaker grilles that add a degree of flair – but it’s minimal.

There are a couple of redeeming features though. The dimpled, rubbery back seems odd at first, but I have grown to appreciate its grippy feel. In addition, a new “Convenience Key” sits right where you’d expect the home button to be. During my first three days using the DTEK50 I constantly hit this when trying to unlock the phone, but it’s actually a user-programmable button that I’ve since assigned to quickly bringing up my email inbox.

The buttons themselves are clicky and responsive and I like having the volume rocker and lock switch on opposite sides; this is a rarity these days. There’s no fingerprint scanner, which I assume was missed off to cut costs. 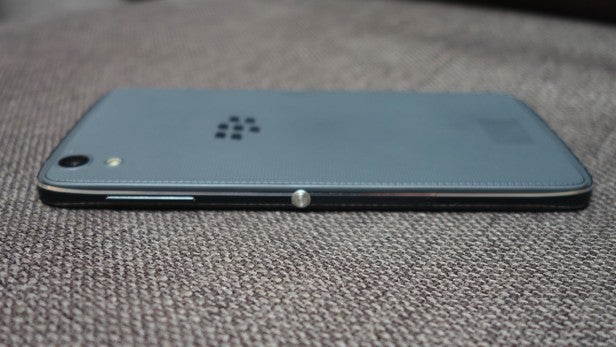 The DTEK50 is small, though, one of the most pocketable phones I’ve used this year. It isn’t as small as the iPhone SE, but it’s much trimmer than the chunky Moto G4. Its 5.2-inch display helps, but the bezel is slim and it’s as thin as an iPhone 6S, making it very easy to use in one hand.

For the price, I’d expect a slightly more interesting design for the DTEK50, but at least it’s functional.

The BlackBerry features a 5.2-inch screen. Not long ago this was considered huge, but now it feels decidedly small. I like it though, it feels big enough for gaming and watching the odd YouTube video – certainly not films – but small enough that you can easily move your thumb from one side of the device to the other. 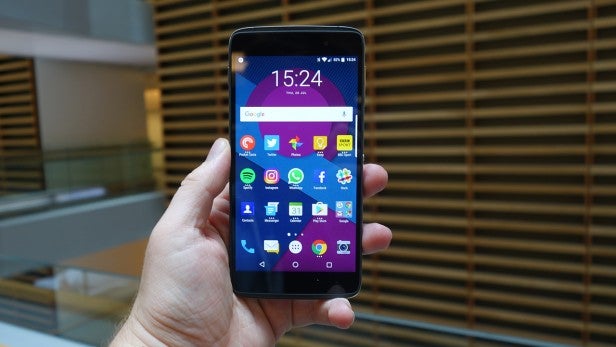 The screen’s overall quality is also good – but don’t expect to be blown away. The 1080p, IPS LCD panel is bright and is colourful without oversaturating reds and yellows. Viewing angles are decent, too, and it manages to stave off reflections when it’s sunny outside.

The DTEK50 features a temperature slider in Settings that enables you to make the screen warmer or cooler – and I’d suggest using it. By default it was the display was a little cool and everything felt a bit blue, but warming things up helped no end.