Design
RIM’s prospects at the high-end of the smartphone market may be balancing on a knife edge but when it comes to budget handsets it’s still going strong, and its latest addition, the BlackBerry Curve 9320 is a good example of why.

The BlackBerry Curve 9320 is the company’s cheapest ever handset, with it already available for under £150, and for free on £15pm contracts. However, it still packs in a number of useful upgrades over its predecessors the 9300 and 8520. 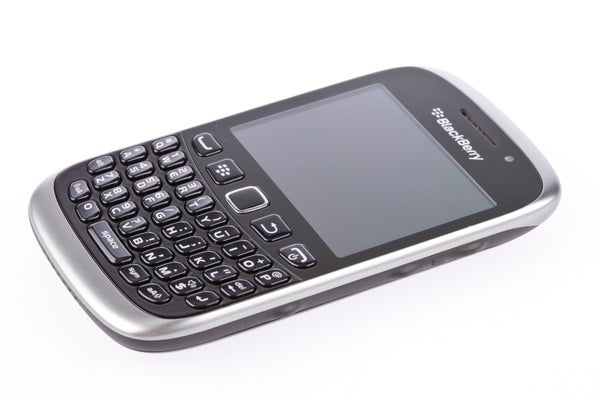 You wouldn’t guess there was all that much new here judging by looks alone, though. It’s every bit the classic BlackBerry in terms of styling – it’s black with silver trim and the front is split between the screen and keyboard. Same old, same old. 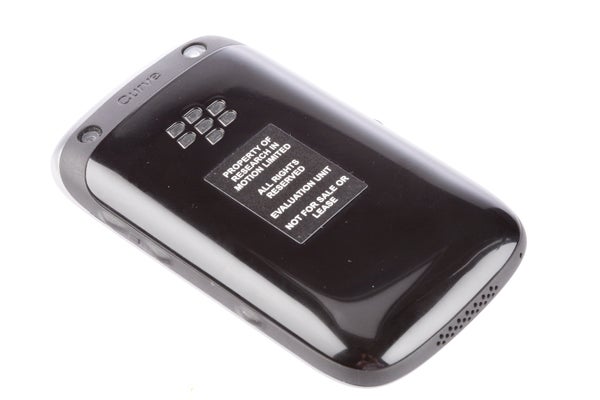 Simple though it is, it’s still a reasonably smart looking handset that feels well made too, particularly when it comes to the quality of the keyboard and other buttons. Yes it’s all plastic and the glossy black back and screen in particular will scratch fairly easily but then that’s somewhat par for the course on a budget handset, and a case will keep it protected. What’s more with this being a non-touchscreen handset, the screen should take less punishment.

Features
Looking a little closer, the key differences compared to previous handsets come to light. One of the most obvious is the headphone socket, which has been moved from the left side to the top, making the BlackBerry Curve 9320 much easier to put in your pocket with headphones attached. The left edge is also home to a dedicated BBM button, giving you instant access to your friends’ chit chat. Another addition is that of an LED to accompany the camera. 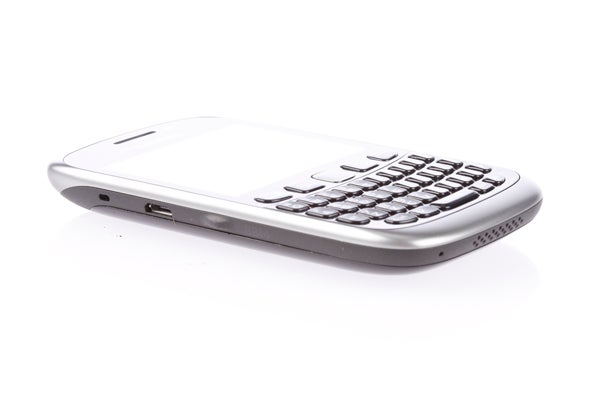 These new features join an otherwise typical arrangement of physical features, with volume, play/pause and camera buttons on the right edge, microUSB on the left and the screen lock up top. Under the battery cover there’s also a microSD slot for expanding the storage. There’s no microHDMI, though, not that it’d be much use on a phone of this calibre. 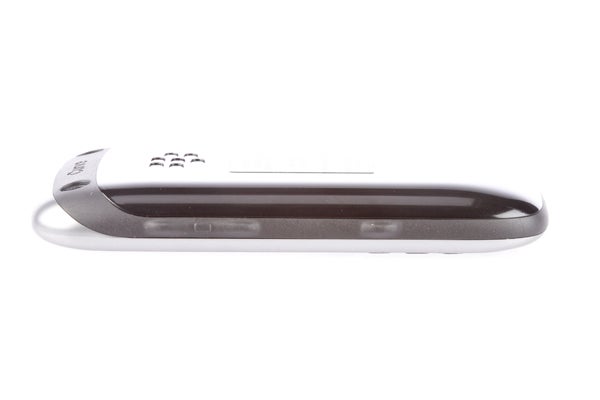 As the BlackBerry Curve 9320 is a fairly modestly sized phone (dimensions of 109 x 60 x 12.7 mm) all these features are easy to reach, so one handed use is a cinch. At 103g, it’s a couple of grams lighter than the 9300, and is about a millimetre thinner too, but otherwise they’re identical, bulk wise. This does make it a fairly chunky phone by today’s standards – compare it to the 11mm of the 9360 even – but it’s still more than pocketable.

Screen
Aside from its plasticky build this phone’s most obviously budget feature is its screen. At 2.44in across it’s actually 0.02in smaller than that of the 9300, though it still sports the same 320 x 240 pixel resolution. It’s this latter figure that’s the important one as it means this phone’s screen isn’t exactly what you’d call sharp. It’s just about adequate for all your basic phone duties such as emailing, texting and calling but trying to view full size websites can be a bit of a chore and watching video is a pretty crummy experience. Viewing angles aren’t all that clever either but we didn’t find them to be an issue in day to day use. 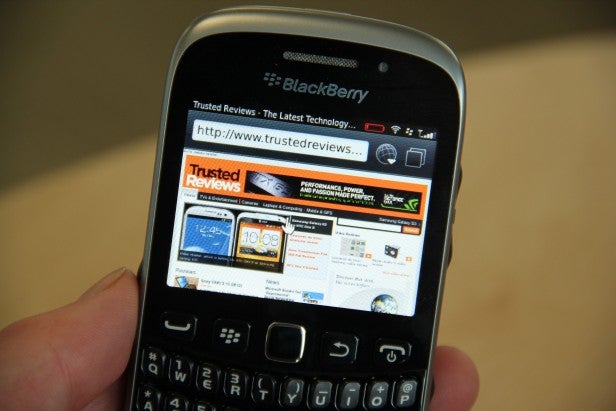 The key thing to bear in mind here is that no phone of this form factor (small landscape screen atop a keyboard) is going to have all that great a multimedia experience so the quality of the screen, over a certain point, is of limited benefit – even the Bold 9900 struggles to convince as a video player. Nonetheless, it feels pretty backward to be looking at such a low resolution screen in this day and age. Stepping up to a Curve 9360, for instance, does bring a marked improvement that is noticeable in most day to day activities, and particularly the web browser.

Keyboard
Where the 9320 makes up for its poor quality screen is in the excellence of its keyboard. BlackBerry has long made excellent keyboards, even at the budget end of the scale but here it has excelled itself. Each and every key has a really defined action, with next to no wobble, and a near perfect layout. The only downside is the slightly smaller size of the phone compared to the premium Bold 9900 and Bold P9881 models, which means that each key is that bit smaller, making it difficult to pinpoint. Nonetheless, we were able to type at a decent pace. 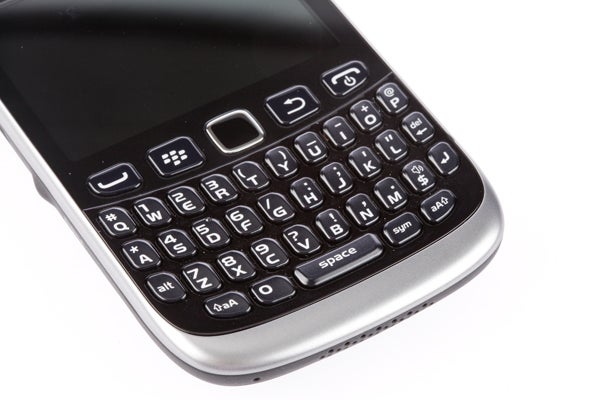 There is a big but, however, and this is that the BlackBerry word prediction is still miles behind iPhone, Android and Windows Phone. Only the most basic of typos will be picked up, so depending on how accurately you type you could find yourself constantly going back for corrections.

All told we still found ourselves typing faster on onscreen keyboards, though we understand some people simply prefer the tactile approach.

Calling
As ever with BlackBerrys, the call quality on the Curve 9320 is more than acceptable. We weren’t blown away by the clarity on offer but you’ll get by. The speaker isn’t as loud as we’ve come to expect of BlackBerrys but it’s at least on par with any other budget handset.

Performance
Another big improvement on this handset compared to previous budget BlackBerrys is the processor. Clocking in at 802MHz, it’s more than 200MHz faster than the 9300, and it’s backed up by double the RAM (512MB). The result is a phone that feels reasonably nippy. You’re very seldom kept waiting while moving round the interface and opening basics apps like Facebook and Email. It’s only more demanding apps, graphically rich websites and games that’ll regularly leave you having to wait for things to load.

All this said, this device can’t work miracles and comparing to faster BlackBerrys such as those from the Bold series does expose a shortfall in speed, even if you may not notice an issue using the phone in isolation.

Interface
Perhaps the biggest surprise of this phone is that it’s the first to ship with the company’s latest BlackBerry OS7.1. This brings a new hotspot feature for sharing your phone’s 3G connection over WiFi along with battery life and performance improvements over OS7.0, which itself had already introduced a host of extra features and tweaks over the OS6.0 and OS5.0 of previous budget Curves. 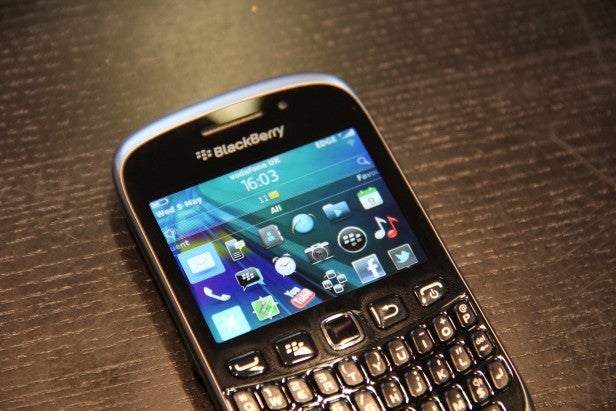 It’s all familiar and easy to get your head around, though there’s still an over reliance on menus – it can sometimes feel like you’ll never get back out from the depths of some multilayer menus. Compared to the likes of Android and iOS this feels positively archaic, though somehow it still feels natural on a BlackBerry.

Of course the biggest overarching interface issue is the lack of a touchscreen. The optical trackpoint in the centre of the row of navigation buttons works very well but there’s no denying that a touch interface is more intuitive and often quicker. But that’s the price you pay for having a good quality keyboard – you don’t get both at this price. 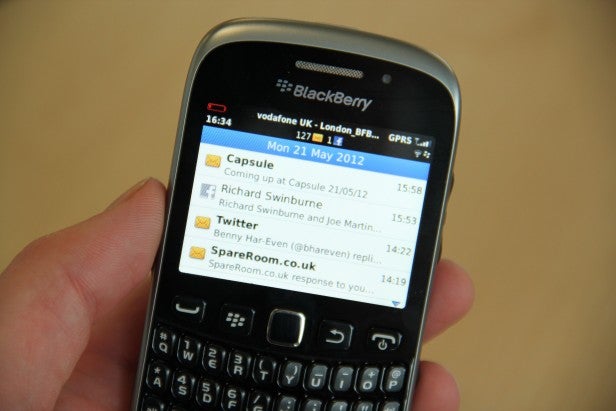 As ever with BlackBerrys, the key to this phone’s appeal is its messaging abilities. The integrated inbox pulls in messages and alerts from the likes of your email, Facebook and Twitter, so you only need visit one place to catchup on everything. There’s also the classic flashing red led that lets you know when a message has arrived, and of course the instant messaging service, BBM is on hand. Indeed, for many this will likely be the main appeal of this handset, especially given it now integrates nicely with Facebook and Twitter. 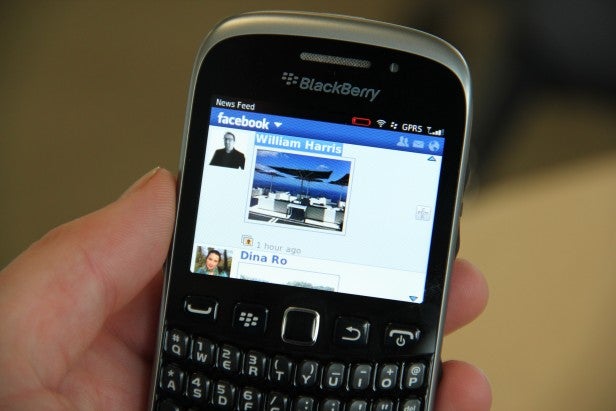 When it comes to other core phone tasks such as contacts management, calendars and such like, the low resolution screen, lack of touchscreen and general interface design means it doesn’t exactly excel at these things but you get by.

When it comes to those smartphone extras, BlackBerry has made a good attempt to make this phone capable straight out the box with a host of preinstalled apps including Facebook, twitter, London Underground map, eBay, Natwest banking and Foursquare, but there are a few holes. For instance, you don’t get GoogleMaps, with BlackBerry Maps instead on offer. It’s okay but simply not as good. 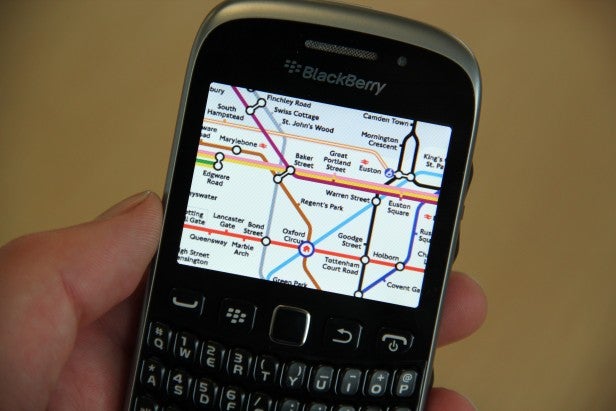 Dive into the app store and there’s a growing but still small selection of apps. At least given the screen’s dimensions and resolution the lack of games feels less of an issue. 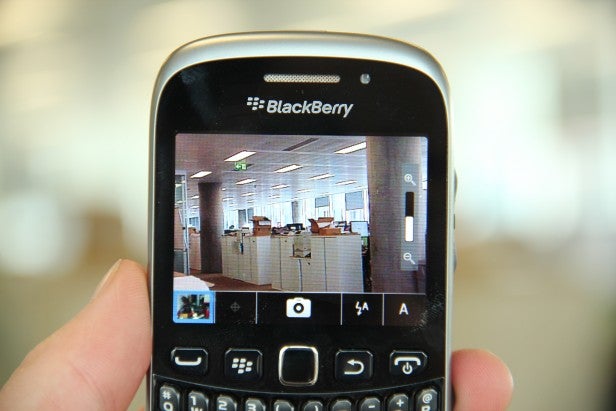 One surprise on the multimedia front is the camera. Despite being only 3.15MP and having fixed focus, it actually produces some quite nice snaps. Its low light performance in particular is excellent compared to most budget models.

The final little flourish from the handset is that it sports a larger battery than its predecessors – some 1450mAh compared to 1150mAh. The result is a phone that lasts and lasts. At least two days solid use should easily be obtainable.

Verdict
There’s no two ways about it, the BlackBerry Curve 9320 isn’t a phone that will excite many of you. Its screen is small and low resolution and the selection of apps on offer is fairly poor. But, if you’re in the market for an upgrade to your old budget BlackBerry or you just want a capable messaging-oriented smartphone with a great keyboard then this phone is well worth a look.