One of the original BlackBerry’s best features was its full QWERTY keyboard, which made writing emails and text messages a very simple affair. But the downside of that keyboard was that it made the handset big and bulky, resulting in most BlackBerry users carrying a separate mobile phone for making voice calls. Research In Motion (RIM) tried to address this issue with the BlackBerry 7100 with varying degrees of success. But now RIM has released a new handset aimed at the user who wants to carry one device for email and phone, the BlackBerry 7130g.


The first thing that I noticed about the 7130g is that it looks good. Whereas previous BlackBerry handsets looked pretty dull and work-like, it looks like RIM considered design as well as functionality with the 7130g. Finished in matt black and silver, the 7130g looks pretty sleek and stylish – OK, it’s not going to win any beauty contests when compared to a Motorola V3 RAZR or a Nokia 8800, but it’s definitely a step in the right direction from RIM. 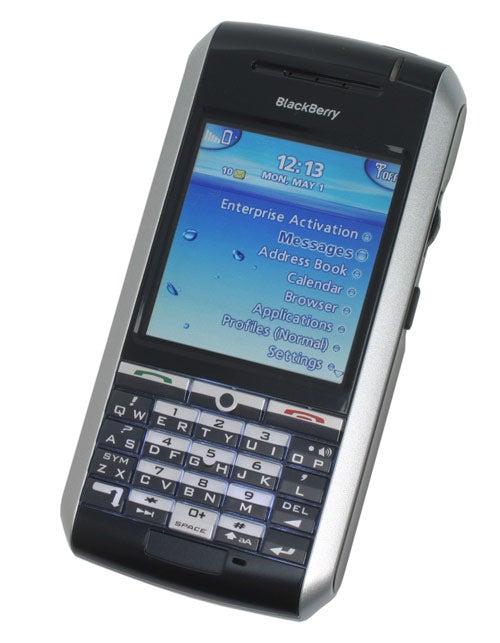 
Obviously RIM has been able to reduce the dimensions of the 7130g by doing away with the full QWERTY keyboard. This means that you either have to use the multi-tap method of inputting text or the SureType predictive text method. If you’re used to using T9 predictive text with your mobile phone, you’ll feel right at home with SureType. I’d go as far as saying that SureType is a truly excellent text input method and I found myself typing emails almost as fast on the 7130g as I did on the 8700 with its full keyboard.


Of course SureType has a major advantage over T9 since there are never more than two letters on each key, meaning that it’s far easier to work out what you’re trying to say. SureType also understands a huge amount of company names, so you don’t have to worry if you’re writing an email about Toshiba, Philips or Nissan because SureType will know what you mean and even automatically capitalise brand and company names.

My usual gripes about BlackBerry email still stand. It can be confusing that all your emails are date stamped with the time you downloaded them to the BlackBerry and not the time they were actually sent. It’s also annoying that you can only “delete prior” from a date bar in your inbox – I just don’t understand why you can’t delete prior to any point in your inbox. Finally, I’d like the ability to turn on the GSM antenna, but NOT turn on email. Sometimes I’d like to be able to browse a web page or send a text message without having to receive 300 emails.


Those moans aside, I maintain that the BlackBerry email client is superb. The ability to forward pretty much any email account to a device in your pocket never ceases to impress me. Of course large corporate entities will no doubt make use of the BlackBerry Enterprise server solution, but for me the real jewel in the crown is that any individual with an email account can use a BlackBerry. 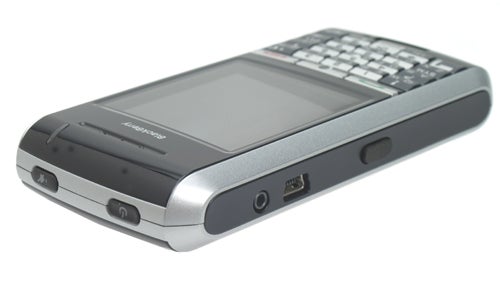 The screen is a huge improvement over the 7100, but obviously it’s not quite as large as the display on the 8700. At 2.4in the screen is a decent size considering the dimensions of the device as a whole, while the 240 x 260 resolution makes image quality impressive. As with the 8700, photos look very good on the 7130g, but also like the 8700 the lack of built-in camera somewhat negates this feature. RIM insists that its corporate clients specifically don’t want an integrated camera, but to me the obvious solution would be two BlackBerry models – one for consumers and one for ultra-paranoid corporate types.


The 7130g supports Bluetooth 2.0, but this can only be used for headsets and hands free kits. RIM has disabled the Bluetooth file transfer capability, once again citing the fact that corporate clients don’t want employees to be able to transfer files between mobile devices.

Obviously the 7130g can synchronise with your PC so your contacts and diary data will be with you at all times. Therefore sending an email is just a matter of pulling the address out of your contacts list, rather than having to manually type an address in.


If you want to create documents with the 7130g you’ll be glad to see eOffice in evidence. This mobile suite includes a word processor and spreadsheet package. Obviously you’re not going to create very long text documents or very complicated spreadsheets on the move, but both packages work well and give the true mobile user a handy set of pocket applications.

Yahoo! Messenger has also been thrown in with the 7130g. Now I’m a firm believer in having instant messenger functionality in a mobile device, and I use MSN messenger quite often while I’m on a train to keep in touch with the guys in the office. The only problem with including Yahoo! Messenger is that I don’t know anyone else that uses it, so it’s not much of a tool for me. The idea is right, but I would have preferred to have seen MSN messenger since it’s far more prolific than Yahoo, although I doubt that Microsoft would want to see it running on a non-Windows Mobile device.


A really great inclusion with the 7130g is Google Maps. Not only are you able to pinpoint a location by typing in an address or post code, you can also plot directions between points. Google Maps really makes use of the excellent screen as well, so if you need to find your way somewhere and don’t have a GPS, you should be able to get from A-B with the 7130g. I made good use of this feature when I had to head into London for meetings and wasn’t familiar with venues – bringing up a map of the area on the 7130g made getting to the meetings simple.


Another impressive feature is the web browsing. I was surprised at how fast the 7130g could resolve pages. Even when roaming the browsing was fast, as I found out when I was catching up on the footie scores via the BBC Mobile site while I was out in Germany for a couple of matches. The data speed is helped by the fact that the 7130g supports EDGE as well as standard GPRS. 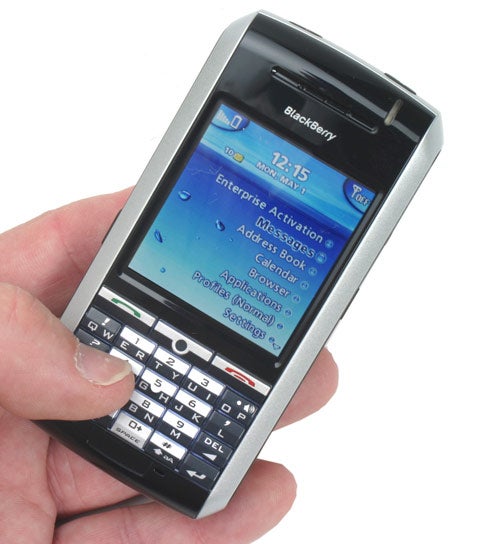 To be honest though, the 7130g is pretty nippy no matter what you’re doing, but this isn’t surprising since it uses the same 312MHz Intel XScale processor as the 8700. Flicking between menus and applications is pretty much instantaneous with the 7130g, which isn’t something that can be said for some smartphones.


The 7130g is a quad band handset, so it supports GSM 850, 900, 1800 and 1900, which means that you should be able to use it more or less anywhere in the world. Considering that RIM and the network operators pitch BlackBerry devices at the corporate customer, it comes as no surprise that the 7130g is designed to be traveller friendly.


Battery life is superb, with RIM quoting 18 days in standby and four hours of talk time. I’m not sure how accurate that is, but I can say that I’ve been using the 7130g with over a week between charges. Of course I do use it pretty much solely for data, but that’s still pretty good. Also, being that the device is charged via a mini-USB port, you can simply hook it up to your PC or notebook when it does need some juice.

The 7130g can use MP3 ring tones, but this highlights the lack of Bluetooth file exchange once more. Why? Well I was sitting around the dinner table with some fellow technology journalist at a press event a week ago and the conversation turned to ring tones. A couple of guys round the table said that they’d really like to have the CTU ring tone from 24, and since that’s what I use on my phone I offered to give it to them. The result was that I ended up sending this ring tone to about six people via Bluetooth – if I’d been using a BlackBerry as my phone, they would have all gone away disappointed. 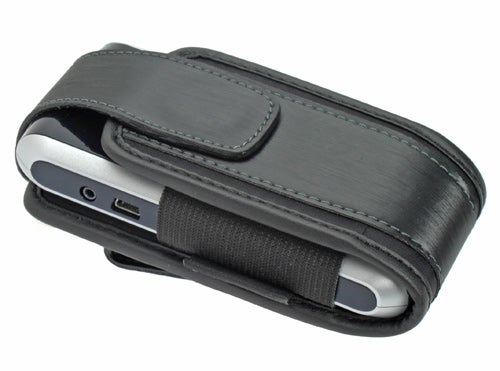 The 7130g launched exclusively on the O2 network, but it will no doubt appear from the other carriers in time. The 7130g can be had from free, depending on the tariff you choose and the length of contract. Using the Internet Mail option will set you back £15 per month for the BlackBerry email service, on top of what ever voice contract you choose.


Despite my ongoing gripes about the email client usability and RIM’s pandering to corporate paranoia, the 7130g is far and away the best BlackBerry handset to date. If you really need to have all your email, no matter where you are but only want a single device in your pocket, the 7130g could be the answer to your prayers.


I firmly believe that it’s about time that RIM bit the bullet and started making two models of each BlackBerry – one for corporate use and one for consumers. By offering a model with an integrated camera and Bluetooth file exchange, RIM could attract a whole host of new users. The fact that the 7130g has a whole host of consumer friendly features highlights this issue.


That aside, the 7130g is a great handset and easily the best that RIM has produced so far. I’ve been using it for the past few weeks and found it to be a great mobile companion, and not just for email. The dimensions and design make it a perfectly usable mobile phone, while features like the integrated Google Maps and fast web browsing make it extremely versatile.


If you’re worried about the reduced number of keys don’t be, SureType really is good and you’ll soon find yourself tapping out emails as fast as you would with a full QWERTY BlackBerry. Although I still firmly believe that there aren’t that many people that absolutely MUST have their email anytime and anywhere, if you feel that you are one of those people, this is the device you want.