Introduction
BlackBerry 10, or OS 10 as it’s also known, is primed to deliver RIM back into the prime time. Or see it nosedive further into tech has-been territory. We got some hands-on time with the new operating system ahead of its release in early 2013 to see whether it’s worth getting excited about.

BlackBerry 10 Interface
One of the key concepts of BlackBerry 10 is that all parts of the interface are reached with graceful swipes, rather than the staccato back and forward of Android and iOS. It’s what RIM likes to call Flow, and it’s set to become a tagline of BlackBerry 10.

The basic layout of the system is familiar in its level-based structure, though. You have a lock screen that offers a few notifications of new BBM messages, new emails and so on, a home screen and the apps menu. 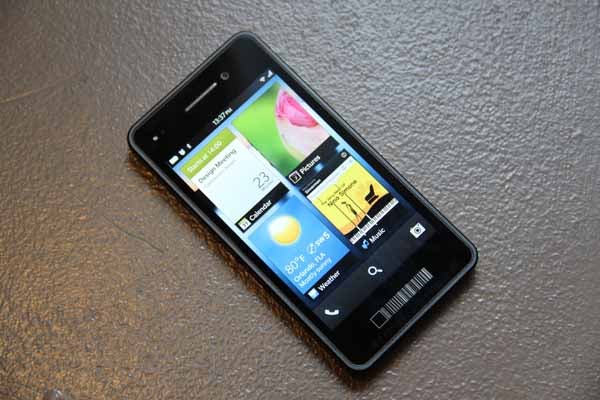 BlackBerry 10’s homescreen is quite different from those of Android, though. Instead of widgets or simple shortcuts, the screen here is a scrollable page of tiles, each of which acts as a chunky preview page of an app. It could be a webpage from a browser, a cut-down forecast from a weather app or a music player.

Eight of these app panes can be open at any one time, and four of the things fit onto the screen of the BlackBerry 10 preview device that has been sent out to around 5,000 app development partners. They’re not designed to necessarily be kept there indefinitely, and you can easily close them using the standard cross in the corner of each. 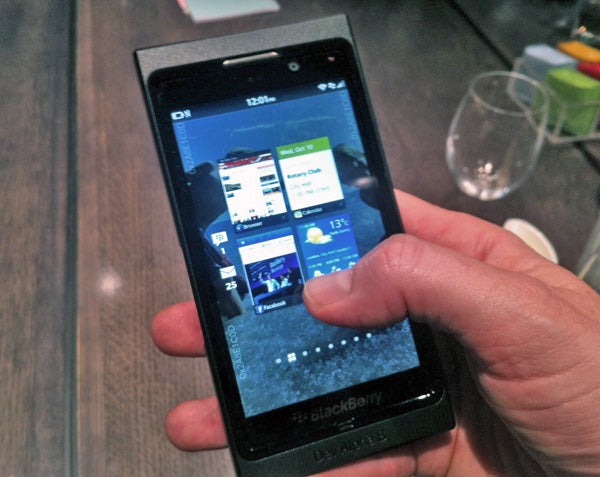 From this home screen, you can swipe right to left to head to the apps menu, or left to right to access the message centre. RIM sees this messaging part as the bedrock of BlackBerry 10, a beating heart that’s always “living underneath” whatever you’re doing.

This pane defaults to your universal inbox as standard, compiling messages from the BlackBerry Messenger, your various email accounts and social networks like Linked-in, Facbook and Twitter. RIM says there’s an API out there that will let other sources – such as other social networks – hook into this messaging mainframe too. 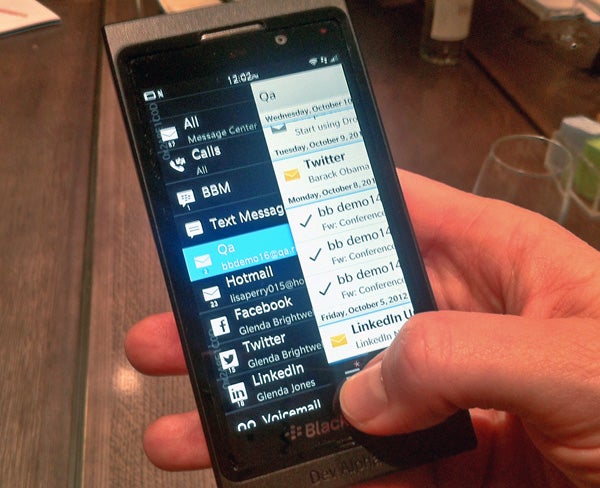 This isn’t the area BlackBerry 10 wants you to head to for minute-by-minute updates. For this you want the notifications screen. It’s accessible from anywhere in the OS, simply by swiping upwards from just under the screen. The software can tell whether you’re swiping upwards rather than starting the sweep from under the display, minimising the chance of accidentally accessing this menu. 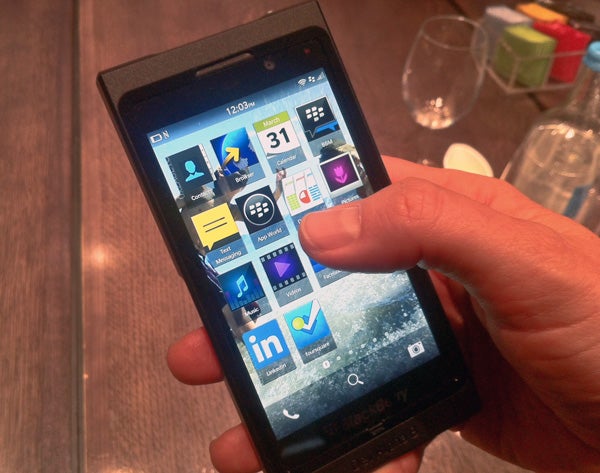 The notifications menu shows you a quick update of how many new emails, messages and BBMs you’ve received.

BlackBerry 10 Business Usage
We’re starting to waltz into familiar territory here, though, and what’s important about BlackBerry 10 is – as a touchscreen interface – how it differentiates itself from the competition. And from a pure navigation view, one of the most important parts is its “no back button” policy.

From RIM’s point of view at least, you could say moving through Android and iOS is like parallel parking, where BlackBerry 10 is like ice skating. It’s a case of smooth arcs versus juddery staccato movements.

It wants to be graceful, but beauty in movement doesn’t quite translate to visual beauty. BlackBerry 10 is a functional-looking OS, with little graphical flair or panache. Transitions between screens are smoothly animated, but app icons and the panes are largely prosaic. 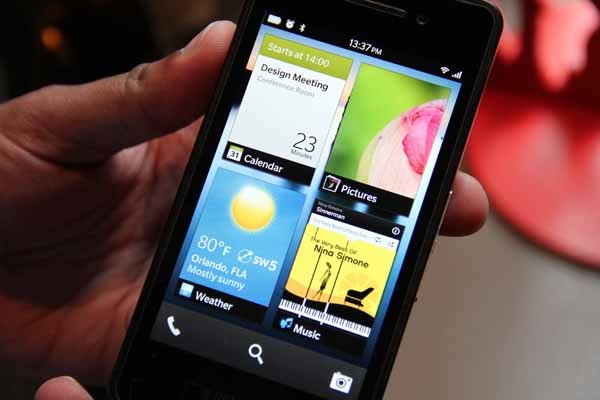 This is partly what helps BlackBerry 10 feel like it keeps the business angle that Android and iOS don’t really have. More important for business types, though, is the two-sided structure of the system.

There are two password-protected zones, called Work and Personal, and information can’t simply be copied and pasted from one to the other. To switch between them, you drag downwards from the top of the home screen, making a little Work/Personal menu pop up.

This feature alone makes BlackBerry 10 phones more feasible as mobiles that can easily switch between duties and work and home devices. It’s not so much the workers’ ability to have two different “living spaces”, but how much more it’ll be able to comply with the security standards of large companies. 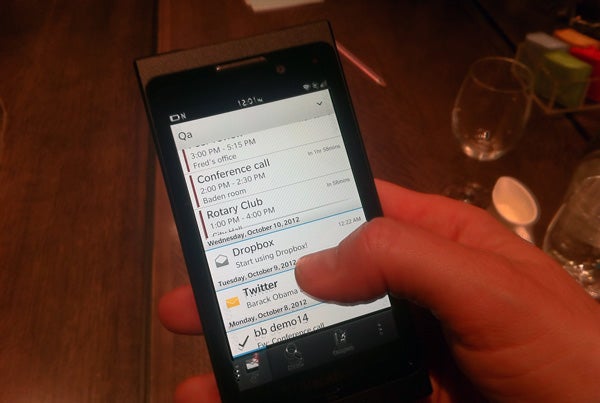 Sensitive information can even be remotely wiped from the work section. And, yes, your Personal zone can be password-protected to stop Dave from accounts making fake posts on your Facebook wall.

BlackBerry 10 Keyboard
Real business high flyers may also appreciate the Blackberry 10 keyboard, which can easily switch between three languages on the fly. It won’t write your sentence for you, of course, but has a fairly aggressive predictive that we saw switching between English, French and Spanish mid-flow. It’s clever stuff.

It won’t suddenly switch what you’ve written, though, as there’s a manual aspect to the predictive texting. Suggestion pop-up over the next letter in that word – i.e. where your eye will travel if that is indeed the word you’re after – and you need to swipe upwards from that letter to take the suggestion. This rules-out Swype-style key input, but it does sound quite neat. 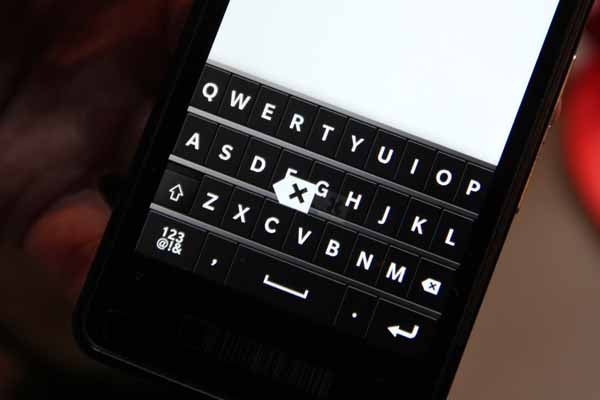 Other things that vary from the smartphone OS big boys include that the Webkit browser still supports Adobe Flash (as well as HTML5) and that the virtual keyboard uses visible “frets” to separate the keys. Parts that are very familiar but nevertheless welcome include the auto-harvesting of contacts data from social networks and integrated easy sharing of things like photos over email, social networks, SMS and so on.

Does BlackBerry 10 have what it takes to bring back all the fans who flocked to Android and iOS? We’re yet to be entirely convinced. For corporate smartphone users, it has some seriously impressive additions that should help thousands avoid having to carry two phones in their pockets at all times. However, we can’t help but wish the OS had turned up a year ago or longer, when the BlackBerry name hadn’t been quite so whittled away by increasingly attractive competition and that unfortunate riot-related publicity. 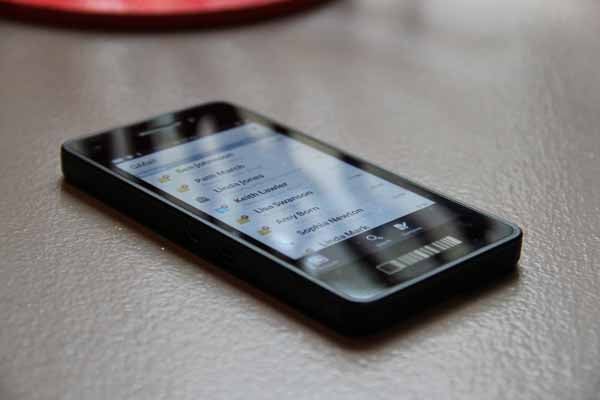 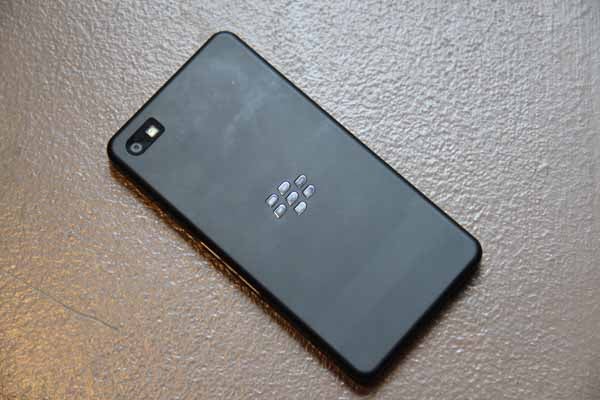 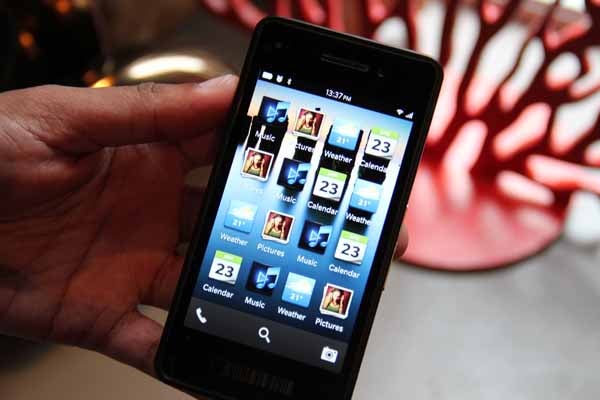 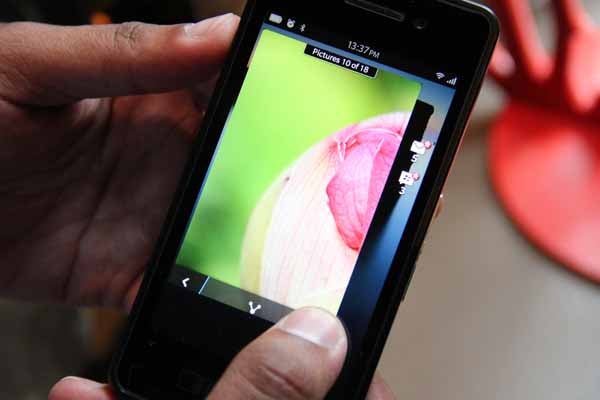 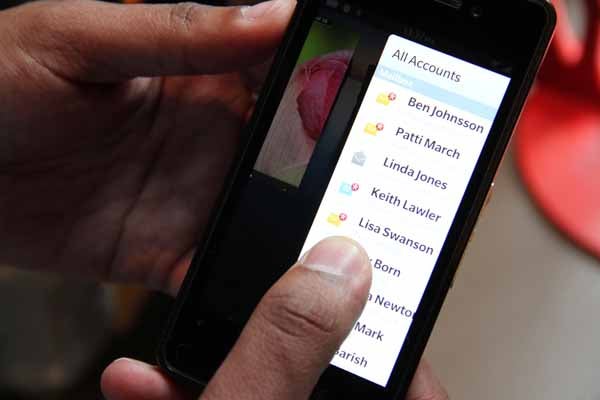 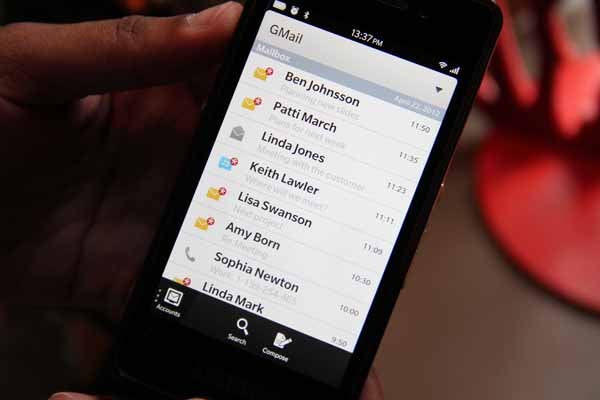 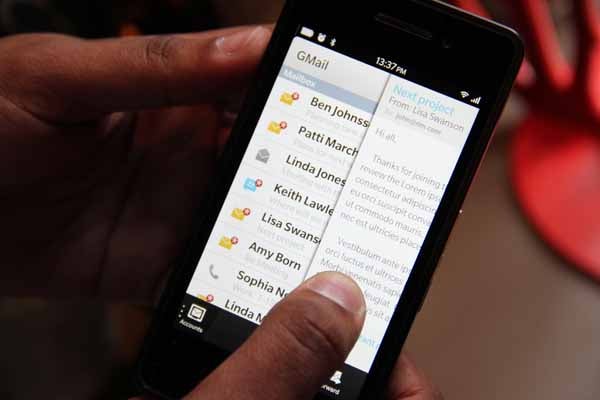 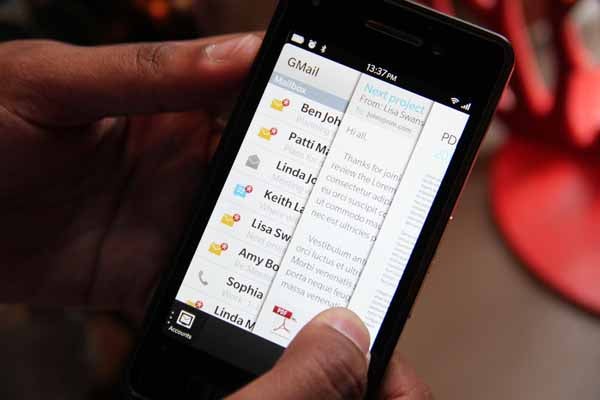 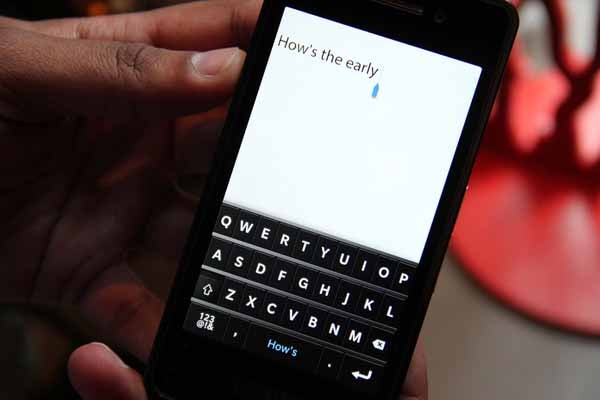 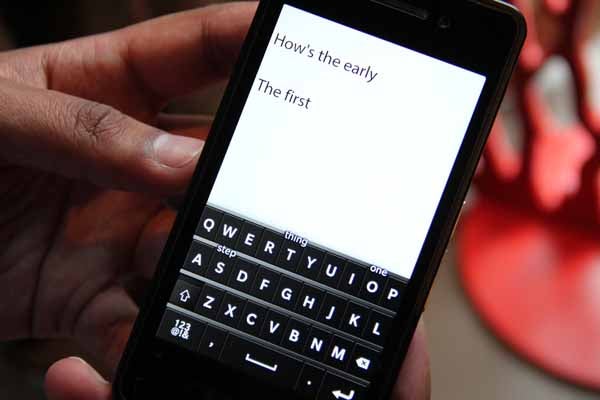 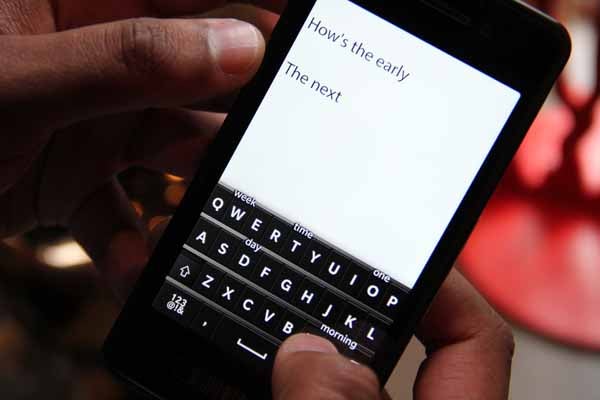 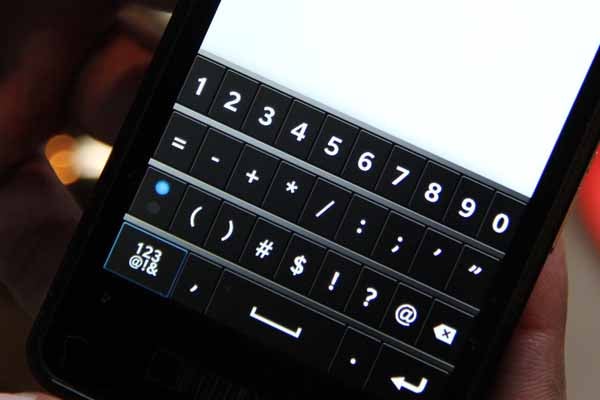